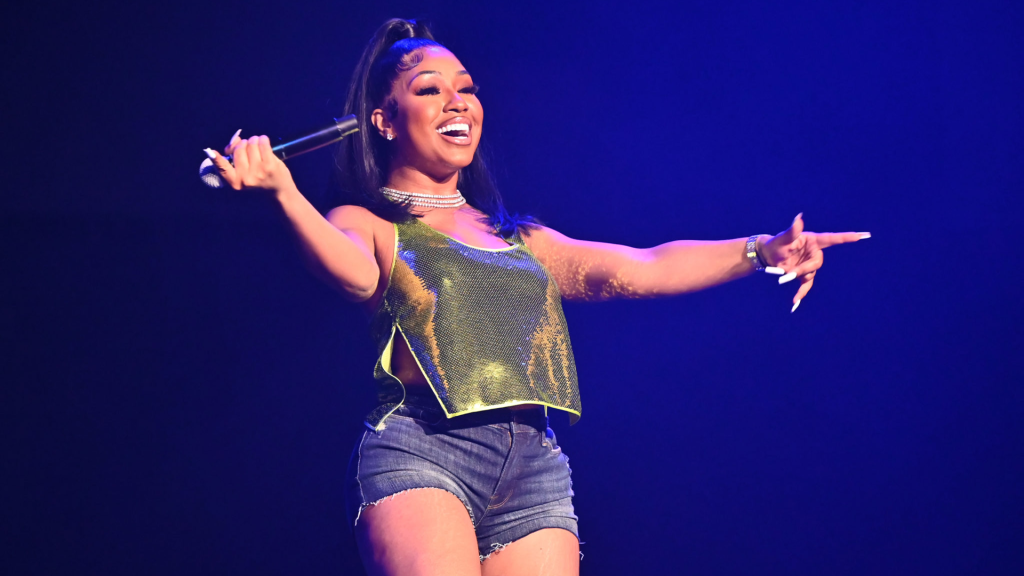 Who is Yung Miami?

A musician and singer, who rose to prominence as half of the rap duo City Girls, Yung Miami was born as Caresha Romeka Brownlee, under the zodiac sign of Aquarius on 11 February 1994, in Opa-Locka, Miami-Dade County, Florida USA; she holds American nationality and her ethnicity is African-American.

Yung Miami is also known as a social media influencer, whose Instagram account has been followed by over 5.5 million people, while her new podcast show “Caresha Please“ is one of the most-watched on REVOLTTV.

Yung Miami was raised in Opa-Locke by her parents, whose names she hasn’t revealed, however, it’s known that her mother was in a prison until 2021, and her father has also served time in prison. Yung Miami spent most of her childhood with her mother’s friend Katrina Laverne Taylor, who is also her god mother and idol, better known by her stage name Trina; she’s an American rapper and television personality, perhaps known best for her breakthrough single “Nann Nigga” with Trick Daddy, who is also a friend of Yung Miami’s mother.

Speaking of Yung Miami’s educational background, she attended Carol City Middle School in Miami Gardens, and then a local high school. Upon matriculating in 2011, she didn’t enroll in college, but pursued her music career.

While she was in a middle school, Yung Miami met Jatavia Shakara Johnson, known as JT, with whom she founded the rap duo City Girls. They become close friends, and went on to high school together, both of them dreaming of a career in music.

In August 2017, the duo recorded their debut single “Fu*k Dat Nigga“, and promoted it in Miami’s clubs and through social media platforms. Later that year, their single was included in Quality Control Music’s compilation album.

City Girls released their debut studio album “Period” in May 2018, and in November that same year, their second album “Girl Code”; some of the artists with whom they collaborated were Cardi B, Jacquees, and Lil Baby – Cardi B also featured on their single “Twerk”, which rose to number 29 on the Billboard Hot 100, and in January 2019, they released the music video for this song, which has been viewed over 220 million times on YouTube.

🥹🥹🥹 seeing the city girls @ThegirlJT @YungMiami305 at #wireless Birmingham was surreal they were definitely in the top3 sets pic.twitter.com/sEZzF9aIBr

Their official YouTube channel is now subscribed to by over 1.5 million people, and all of their videos combined have amassed over 775 million views, while City Girls’ Instagram is being followed by nearly 2.5 million.

The duo contributed with guest vocals to Drake’s song “In My Feelings”, and Yung Miami made an appearance in the official music video for this song.

The duo’s most recent single – “Top Notch”, featuring Fivio Foreign – was released in April 2022, has gained over seven million views on YouTube.

There have been various rumors concerning both Yung Miami’s love life and her sexual orientation, and she’s been involved in various affairs. It’s known that she’s a mother of two; her son, Jai Malik Wiggins Junior, was born in 2013, and his father is her ex-boyfriend Jai Wiggins, who was killed after being involved in a shooting in 2020. He and Yung Miami were in a relationship until 2015, when they separated allegedly because of his violent behavior – she alleged that he had pulled her out of a car and punched her in the face, which was the reason why she filed for a long-term protection order against him, and also asked for full custody, however, in the end, the ex-lover co-parented their son.

After that relationship, sometime in 2017, Yung Miami was in a relationship with rapper Ball Greezy, also a Miami native, and the two were together until 2018.

In late 2018, Yung Miami started dating Joshua Howard Luellen, also known as Southside, an American record producer and songwriter, with whom she has a daughter, Summer Miami Luellen, born on 16 October 2019. The two broke up a few months after their daughter was born, then reconciled, but again separated.

Yung Miami came into the spotlight after her statement that she doesn’t want her son to be gay, and that she would beat him if he was, which caused comments that she is a homophobe. She did write somewhat of a retraction, saying that she wasn’t speaking out against gay people, and wrote an apology on her Instagram, saying: ‘I personally want everyone to understand that I personally didn’t mean any harm by saying those comments about my son’s sexuality. My deepest apologies and heart goes out [to] those who have seen that tweet, and were offended by that.’

In 2021, rumors began about Yung Miami dating Sean Love Combs, also known as Puff Daddy or Diddy, and after they were seen holding hands in public, the rumors about this 52-year-old rapper and Yung Miami escalated.

As mentioned, Yung Miami launched her podcast show, and her first guest was Diddy, who said about their relationship: ‘We date. We’re dating. We go have dates. We’re friends. We go to exotic locations. We have great times,’ which many people took as a confirmation that they are a couple.

However, when Diddy was honored with this year’s Lifetime Achievement Award at the 2022 BET Awards in Los Angeles, California on 26 June, in his speech he gave a special shout-out to the women in his life, mentioning his mother, his late ex-wife Kim Porter, and his former long-time girlfriend Cassie – viewers noticed that he didn’t mention his supposed current girlfriend Yung Miami, who was heard cheering in the audience, and holding a sign saying ‘Go, Papi’.

As of June 2022, it is believed that Yung Miami is dating Diddy, she hasn’t been married or engaged, but has two children.

According to sources, as of June 2022, her net worth has been estimated at over $2 million, most of which she’s has earned through her musical career.