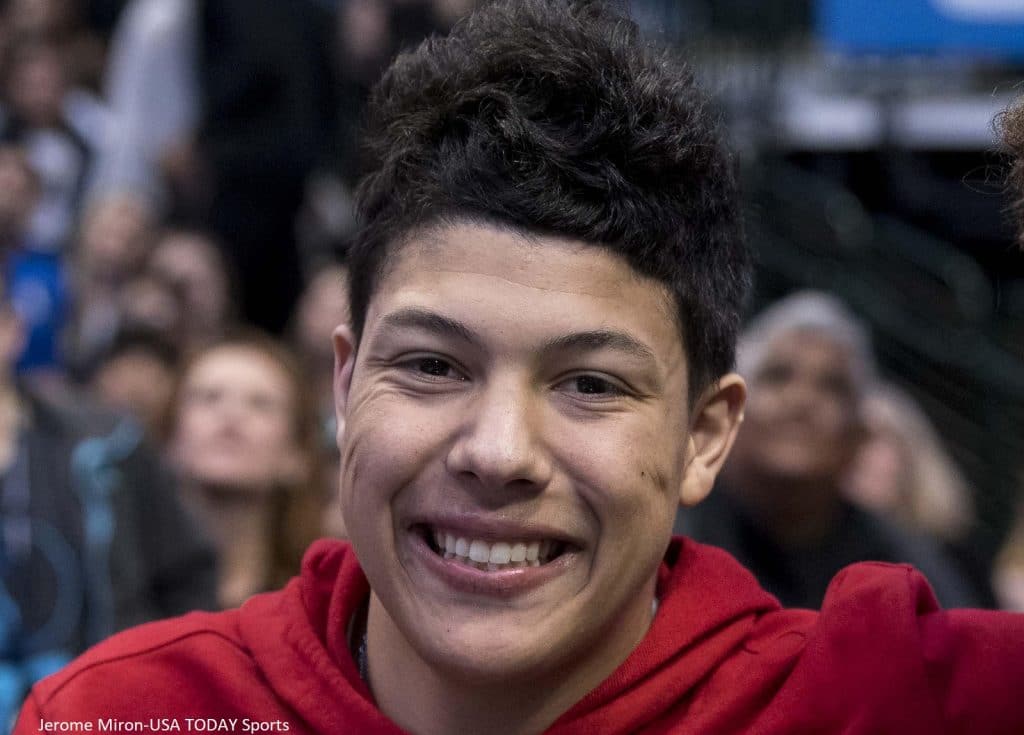 Who is Jackson Mahomes? Is he gay? Partner, Net Worth, Brother

Jackson Mahomes is an American social media personality, who is probably known best as the brother of famous American Football quarterback Patrick Mahomes II. He often ends up at the center of attention, with his scandalous videos, remarks, and actions.

Jackson Mahomes was born on 15 May 2000, in Tyler, Texas USA. His father, Pat Mahomes, was a professional baseball pitcher and played in the major league from 1992 to 2003, while his mother Randi Mahomes is an entrepreneur, who owns the line Quarterback Producer, a line of bags dedicated to American Football and the team Kansas City Chiefs in particular. Pat and Randi divorced in 2006.

Jackson has two siblings: younger sister Mia Randall, and older brother Patrick Mahomes II, who is a successful American Football quarterback who plays for Kansas City Chiefs in the National Football League (NFL). He’s only 26 years old, but has already achieved significant success in his career, surpassing multiple NFL records, and receiving several notable awards, such as Super Bowl Champion, Super Bowl Most Valuable Player, NFL Most Valuable Player, etc. Patrick II is married to Brittany, with whom he has a child Sterlin Skye.

It’s widely believed that Jackson matriculated from Whitehouse High School in Whitehouse, Texas; according to his Twitter post, he has recently graduated from college, but isn’t sure what he’ll do next; he hasn’t revealed his field of study or the name of the university he attended.

Jackson is an influencer and a social media personality – he has more than 250,000 followers on Instagram, but he’s most popular on TikTok, on which he has a million followers, and his videos have attracted over 36 million likes. He usually posts dance videos and game day content, and he frequently appears with various girls.

Jackson shares sponsored posts on his TikTok, partnering with brands such as Vivera, Invisalign, and Raising Cane’s. He has also posted ads on his Instagram, and promoted brands such as Doritos, At&T, and StateFarm. However, he drew negative attention when a business called him out for scamming them. According to the New York Post, Jackson promised Rare Munchiez that he’d tag his company in an Instagram story in exchange for free products. Even though he agreed to the terms in advance, he ignored Rare’s messages, and later even tweeted that he didn’t receive anything from them. He was widely criticized for his irresponsible behavior.

This wasn’t the only scandalous episode in his social media presence. During the 2021 football season, he was criticized for dancing at NFL star Sean Taylor’s memorial. In December 2021, he was accused of being entitled when he showed up at Kansas City Bar with a large group without making reservations beforehand, and then complained on social media even though the bar had apologized for not being able to accommodate so many people. Kansas City Bar responded on social media, calling him out for having ‘un-earned status and a sense of entitlement.’

Jackson has also faced serious backlash for making inappropriate sexual comments to women. His criticism was so serious that he had to take a break from social media for a couple of months to take care of his mental health. However, he returned to Instagram and TikTok in July 2022.

Jackson also has a YouTube channel, but doesn’t upload content to the platform frequently. He sells his merchandise clothes, facemasks, and ’phone cases on Fanjoy.co.

Jackson’s current relationship status is unknown. In November 2021, he introduced a girl named Guzel Yousaf as his girlfriend. Before taking a social media break in May 2022, he was dating Hope Seaton, having announced their relationship in a TikTok video entitled ‘meet my girlfriend’. However, it’s unknown whether they are still dating or not.

Regardless of appearing in videos with various women, rumors are circulating about his sexuality. His audience believes that he’s gay because of his feminine voice and dancing style. Jackson denied the claims in one of his videos, and emphasized that he’s attracted to women. He also stated that making assumptions about someone else’s sexuality is disrespectful. However, it didn’t convince his critics, and they are still claiming that he is homosexual.

Jackson has never been engaged or married, and he doesn’t have any children.

Jackson is 22 years old, with brown hair and brown eyes. His height is 6ft 6ins (198cm) and he weighs approximately 185lbs (85kgs). The young influencer wears casual clothes in most of his videos, sporting t-shirts, shorts and tight jeans. In cold weather he mainly wears hoodies, and also likes accessories such as chains and rings. Jackson usually wears sneakers from brands such as Nike Jordan and Converse – occasionally, he’s seen wearing designer brands such as Gucci.