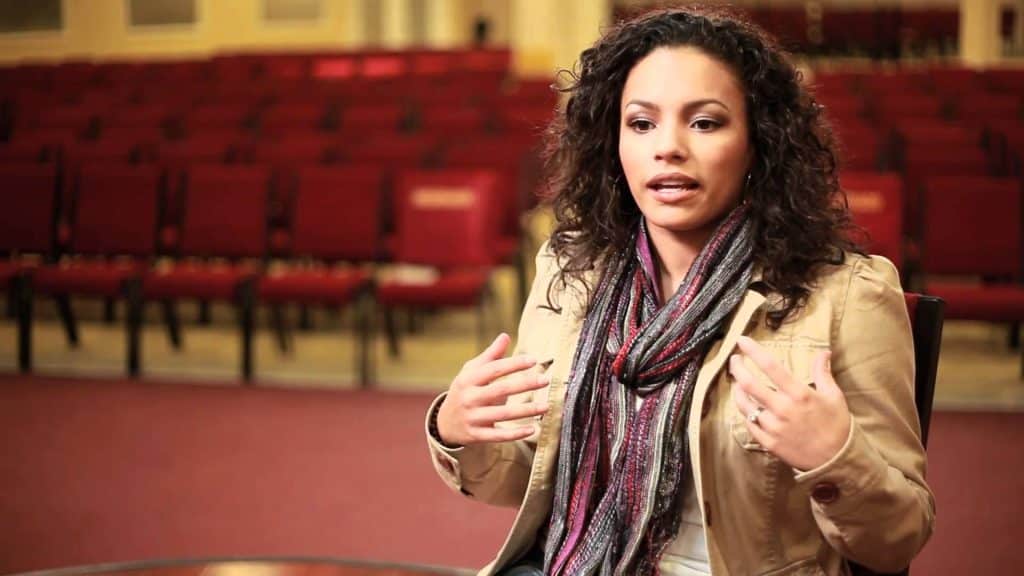 Who is April Lee Hernández? Age, Height, Husband, Net Worth

April Lee Hernández is an American author, television and film actress, most popular for her roles in the television shows “ER” as Nurse Inez, and in “Dexter” as Officer Cira Manzon. She is also known as Eva Benitez from the film “Freedom Writers”.

April Hernandez-Castillo was born on the 31st January 1980, in The Bronx, New York City, USA to Puerto Rican parents. Her father was the owner of a gas station while her mother worked as a cleaning lady. She grew up in a two-parent home—rare in her neighborhood at the time— and was an only child. She attended Aquinas High School in The Bronx, where she was an active member of the drama club, performing in plays at both the school and the local theatre.

After her matriculation in 1998, April wanted to pursue acting, but was discouraged by her parents, who told her to focus on her studies. As a result, she enrolled at Hunter College in hopes of pursuing a career as a nutritionist. Unfortunately, science wasn’t her strongest subject, and soon when in a chemistry class, she realized that it wasn’t her calling. She recalls, ‘I decided to look into other courses to fill up my schedule, and this is when I discovered Acting 101…I changed all of my courses and dedicated my semesters to everything in Acting and Theater’. Eventually, she had to drop out of college as her schedule tightened, with quick booking at comedy clubs and in commercials.

April had her first commercial in the Visa Check Card as “Yo Girl”, alongside Yogi Berra and Yao Ming, which aired during that year’s Super Bowl and became a classic. She went on to star in many more commercials, and started doing stand up comedy.

In 2003, she made her film debut in “Big Wes” followed by her debut on television in an episode of “Law & Order”. She appeared in the television shows, “Jonny Zero” and “Blind Justice”, before being cast in a recurring role in the medical drama, “ER”.

She had her breakthrough role in 2007, as Eva Benitez in the film “Freedom Writers”, alongside Hillary Swank, and more roles followed in the next couple of years, in the television shows “30 Rock”, “Nurse Jackie” and “Rescue Me”, as well as in the films “Broken” and “The History of Future Folk”. In 2009, she reprised her role in the film, “The Big Wes” and had a recurring role in “Dexter”.

She also guest starred in the television shows, “East WillyB”, “Person of Interest” and “Black Box”, and had recurring roles in “The Following”, “Elementary” and “Feed the Beast”, while appearing in the films “Officer Down” and “The Stockroom”. Her most recent role was in 2021 in the series “Prodigal Son”.

April has written two books detailing her experience as an abuse survivor, and how she was able to rise above it all and become her best self. The books are entitled, “Your Voice, Your Choice: A Story of Resiliency and Redemption” and “Embracing Me”.

April never sought help for the trauma she faced at the hands of her abuser, and during filming of “Freedom Writers”, the stories of abuse, death and eviction gave her flashbacks. It was then that she realized that she had a story to share with others. She became a National Coalition Against Domestic Violence spokesperson, and began to share her story in high schools, informing them of the signs of relationship violence. The actress used her Hollywood fame as a platform to spread the message of people’s ability to raise their voice, and rise above their trauma. She has spoken to people of all ages all across the US at middle schools, high schools, universities and even at conferences. Some of her stages have included the Q Conference, Harvard University, and TEDx.

Another social issue April speaks about is her experience becoming a mother, and the struggles of post-partum depression. She gave a talk entitled “The Gift of TransPARENTcy” to her largest audience yet, the TEDx stage, saying, ‘In the last ten years, I have done motivational speaking at several professional events and it gives me great joy to share my story…’. She shares the same passion with her husband, with whom she’s been giving talks at juvenile centers. The pair began their own ministry named Bold Faith Ministries, and have even been certified as youth chaplains!

The details concerning the identity of this person haven’t been disclosed my April to date. According to authoritative sources, April started dating her abuser—her first boyfriend— when she was 16. She recalls, ‘… He was amazing at first. I didn’t see any signs. Then slowly but surely things started happening. I noticed he was a loner, and I started becoming isolated from my friends…’. As an extrovert, April became uncomfortable with the extreme introverted nature of her boyfriend, and slowly started to adapt. She eventually became introverted, and wouldn’t leave her home as often, fearing the wrath of her boyfriend, as he was also very jealous, ‘It got to the point that when we were out walking on the streets I wouldn’t look up. If I attempted to make eye contact with a man he would assume I was flirting’, April reveals.

The abuse was unbelievable and surprising to her since she had never experienced anything like it before. She says, ‘I was an awesome student and a confident young lady who played sports’. The emotional abuse was followed by physical abuse, which only worsened as the relationship carried on. She never shared her abuse with anyone due to immense shame; her parents began to suspect something wrong was happening to their daughter since her happy nature turned into unusual quietness, her grades at school also suffered. Unfortunately, they couldn’t figure out what happened to April, due to her efforts in hiding it. She said, ‘I hid it so well. I was a tomboy, and if they saw bruises I would say, ‘Oh, we were wrestling,’ or, ‘That was just me fooling around.’ I was always playing sports and working out so I could say that’s how I got the bumps and bruises’.

All the abuse led her to have suicidal thoughts. Her wake-up call came one day when they fought for hours on end. ‘I thought he was going to kill me. I thought, ‘Wow, this is my end. This is it. No one knows where I am. No one knows I’m fighting for my life’.’ Hours into the fight, her abuser apologized. April felt like a corpse, and thought it better if he had just killed her. As a result, she began planning her suicide; at 18 years old, she thought she was supposed to be preparing for college, but was instead fighting to spend an entire day without negativity. ‘I heard a voice that said, ‘Yeah, kill yourself,’ and another that said, ‘Don’t do it. I got on my knees and prayed and asked God if he was real to save me and get me out of this situation.’ Clarity finally came to her when she chose to live and get out of that life. She ended the relationship with her abusive boyfriend, who despite convincing her to be with him, surprisingly then left her unharmed. Acknowledging that abusers don’t usually leave without inflicting harm on their victims, she remains grateful that he never again appeared in her life.

Two years later, the then-21 year old met Jose T. Castillo Jr.; at first she didn’t want to be in a relationship, and preferred to be alone. Eventually, the pair began dating and after a year, the couple tied the knot. In September of 2012, the couple were blessed with their first child, a daughter they named Summer Rose. Five years later, they welcomed their second child, a daughter named Lyla Isabella Castillo. Her daughters are half Nicaraguan and half Puerto Rican, from José and April, respectively, and both were born and are being raised in the Bronx.

Summer Rose Castillo followed in her mother’s footsteps, and has become an actress in her own right. In summer of 2020, the second grader was attending school virtually when her class teacher announced that the class would be doing a talent show, virtually. For her part, Summer made a rap video on her school experience, which got a lot of positive views; her mother posted it on social media, and it went viral. One of the impressed viewers was Victor Cruz— a family friend and fellow actor— who at that time was searching for young actresses for a new PBS Kids show. Coincidentally, the producers were searching for young Latin girls in The Bronx, who could rap and sing. Summer’s name was proposed for the role, and debuted at nine years old.

She had the titular role in the PBS Kids animation, “Alma’s Way”— inspired by 15-time Emmy award winner and “Sesame Street” alum, Sonia Manzano. Alma is a six-year-old Bronx native with Puerto Rican ancestry, similar to Summer Rose. Of the role, the young actress said, ‘She’s very curious. She loves her family and friends as much as I do. My family is from the Bronx as well. We love adventures and we also love family time’.

“Acting means to me the freedom to reinvent myself a million times before the final curtain call. The World is my…

April is a female of Hispanic ethnicity, Puerto Rican ancestry and American nationality. She has a height of 5ft (1.5m) and weighs about 100lbs. (45kgs). The Aquarius has brown eyes and is a natural brunette; she doesn’t have tattoos. Concerning her clothing style, she prefers wearing trendy yet comfortable clothing. As of 2022, she is 42 years old.

April’s wealth is mainly from her career as an actress, plus from her comic performances, books and speaking engagements. Authoritative sources cite her net worth to be between as much as $5 million.