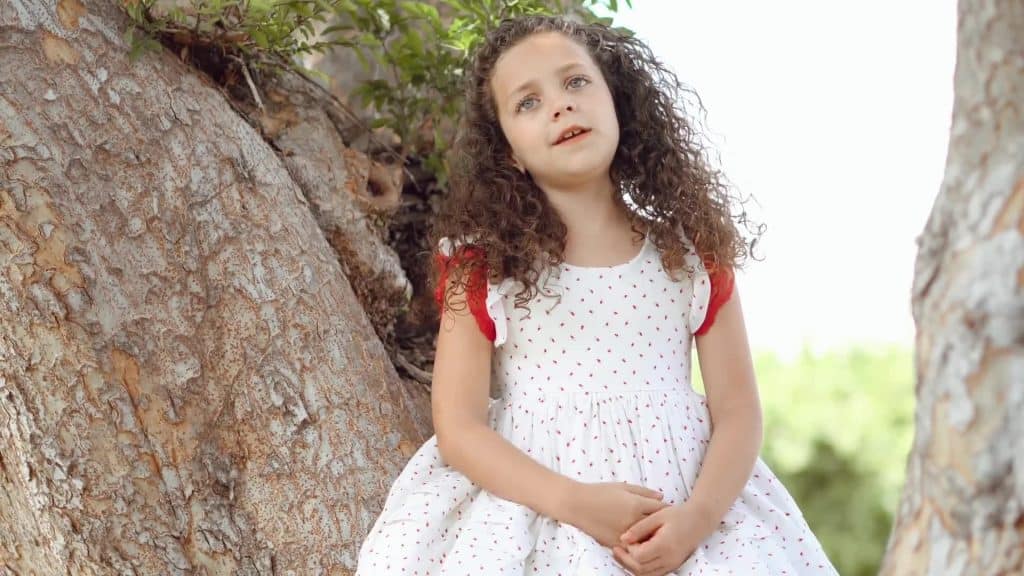 Where is Sophie Fatu from America’s Got Talent today?

The world stood in awe when in 2018 a five-year old girl appeared in episode 1303 in the 13th season of “America’s Got Talent,” What was surprising about her wasn’t just her age and voice quality, but the fact that she chose to perform one of the most difficult songs to grapple with – Frank Sinatra’s “My Way.” She is reputedly the world’s youngest jazz singer, and her name is Sophie Fatu.

Host Tyra Banks led little Sophie to the stage by the left hand, smiling and looking down at her. Everyone was immediately surprised by her size, still unsure of her age. The child star wore a full pink outfit, with knee socks, a wide dress and a bowtie. She waved at everyone, and all the judges waved back – Heidi Klum said ‘Hi there,’ and when Sophie said ‘Hi’ back, the entire audience started cheering.

She presented herself, saying she comes from Charleston, West Virginia, adding ‘Oh my god, there’s so much people.’ Sophie went on to explain that Simon Cowell is her favorite judge, and that in her dream she saw him pushing the golden button. Simon simply responded with ‘Cheeky. Cheeky.’ She thanked the judges for wishing her good luck, and to Simon’s great surprise, the karaoke version of “My Way” started playing.

Due to her age, Sophie had a few vocal missteps while performing, usually upon raising her voice from silence. The judges, of course, understood this physical limitation of the throat, and thus paid no mind to it, but instead cheered her on in the best moments. Simon started dancing with his hands, while the crowd rose up when Sophie raised her voice. She received a standing ovation at the end, with all four judges on their feet applauding as well.

Heidi Klum asked her whether they should start with her favorite judge first, to which Sophie nodded. Cowell immediately said ‘Well, we weren’t expecting that, Sophie.’ He explained how he dearly loves that song, and that normally people at about the age of 90 sing that song, reflecting what their life has been like. It was a massive surprise to him that she was singing it at the age of five.

Simon then did something unprecedented, saying ‘You are hilarious. I want you to date my son. He’s just split up with his girlfriend, so I’m gonna have to make an introduction. Ah, he’s gonna love you, but you are adorable, Sophie, well done.’ In saying this, Cowell was referring to his son Eric Cowell, who is only a year younger than Fatu.

Mel B opened her statement with ‘You are just so cute.’ After Sophie thanked her, as she did every judge for every single compliment, the singer simply finished with ‘You sang like an angel. Well done, you.’

Howie Mandel made a joke about the song she used to perform, remarking ‘Wow, you did it your way, didn’t you? That was amazing. You are the most adorable, cutest, talented little thing I have seen on that stage.’

A post shared by America's Got Talent Auditions (@agtauditions)

Finally, Heidi Klum gave her thoughts as well, stating ‘Sophie, I think you should be very proud of yourself. We see so many people here, a lot of grown-ups, and they’re shaking. They are so nervous, and you just did it like that!’ Howie then gave his yes, while Mel B added ‘Oh, I have to say yes to you.’ Simon then said ‘You are happiness in a bottle, young lady. You got three yesses.’

Heidi ultimately finished the vote with ‘So, Sophie, I’m gonna give you your fourth yes. You’re gonna be in the next round. You did it!’ Right after the child star left with a big ‘Thank you!’ and a smile on her face, Simon’s son joined the judges’ table. Simon asked him ‘What did you think, Eric? Did you like Sophie?’ Funnily enough, the four-year old pressed the buzzer button, to which Simon said ‘You can’t press the red buzzer to her.’

Fatu entered the stage for her second performance, initially being unable to find the X to stand on. After the judges pointed her in the right direction, Simon immediately spoke and asked her to present herself. He continued, saying ‘By the way, somebody has a bit of a crush on you. My son, Eric.’ This was fortunate news to Sophie, who said in an interview prior to her appearance that Eric makes her ‘heart melt.’

Simon then started what would become probably the most wholesome exchange of words in the history of the show, by asking her ‘Sophie, what would you do with a million dollars?’ The child star instantly responded with ‘Um, I don’t really care about money, I just wanna sing for everyone and make them happy.’

Simon excitedly continued, saying ‘Does that mean, Sophie, if you win, we don’t need to give you the million dollars?’ She immediately blurted out a ‘Yes,’ to which Simon responded ‘Ok, well, then I really hope you do well.’

Sophie went all out, performing one of Frank Sinatra’s most iconic songs – “New York, New York.” As she let her voice rip, the audience all stood up again, and started clapping along. Simon followed along, dancing with his hands. The judges got on their feet as well right as the song ended, and Cowell asked ‘Ok. You know, Sophie, you are, officially, the youngest ever “America’s Got Talent” contestant. Do you know that?’

Simon went on to explain how, at her age, Sophie shouldn’t even be able to remember all of the song’s words, much less sing with a key change and a disciplined voice worthy of jazz. His final comment was simply ‘Amazing.’ Guest judge Olivia Munn then asked her who taught her singing, to which Sophie hilariously replied ‘Uh, Frank Sinatra.’

Mel B then gave her commentary, saying ‘You know, when you hold onto those long notes, you have, like, a really rich vibrato, which, it’s so strange I’m even saying that ‘cause you’re only five.’ Howie Mandel simply finished off with ‘Have you been told that you are crazy cute?’

Even though hers was one of the most admirable Judge Cuts performances, Sophie didn’t manage to pass to the next stage of “America’s Got Talent,” but had at that point already achieved immense worldwide popularity through sheer talent.

Where Sophie came from, before “America’s Got Talent”

Unbeknownst to a lot of fans, Sophie wasn’t actually discovered by Simon Cowell and the other judges – she had already been a guest in two highly popular TV programs. The first time she ever came to the little screen was in early 2018, when she featured in Steve Harvey’s “Little Big Shots,” performing “My Way” in front of a massive audience for the first time.

Her voice was definitely noticed by another famous TV show host, this time Ellen DeGeneres. She was asked multiple things in the short interview before taking to the stage – the audiences got to find out that her mother is Russian, and that she started singing Frank Sinatra songs at the age of four.

When asked what made her like the jazz legend, Fatu replied ‘Because he’s so classy and handsome, and I like singing his songs.’ Then, in front of the audience and the camera, she asked Ellen not to tell anyone about Frank, because that’s ‘a secret.’ DeGeneres pretended to lock her mouth shut and throw away the key as the spectators laughed on, saying ‘Nobody will know that.’

After Sophie said ‘I love you Ellen’ in Russian, the host asked her whether there was ‘collusion,’ referring to the previous US elections, to which the child star said ‘No.’ DeGeneres finally inquired whether Sophie gets anxious around crowds, explaining how there are a lot of people watching and asking her whether she ever gets nervous, but Fatu simply said ‘No.’ She then proceeded to wow the viewers with a performance of Frank Sinatra’s “Fly Me To The Moon.”

Following her unprecedented success in the limelight, Sophie received offers to come to Hollywood, portraying Little Girl in the episode of “The Kids Are Alright” entitled “Peggy’s Day Out” in 2018. Two years later, she also appeared as Will’s Daughter in an episode of “Will & Grace.”

In 2021 Sophie played Kid #7 in the episode of “Goliath” entitled “Spilt Milk,” and Gaby Pinch in “Last Looks” – her TV film debut. In 2022 she took on two more projects. Her biggest success on the big screen so far is in the role of Wendy Mae Waters in an episode of Lucia Aniello’s comedy drama TV series entitled “Hacks,” in which she also performed “The Star-Spangled Banner.” Finally, her latest role is voicing Kid in Classroom in “Chip ‘n Dale: Rescue Rangers.”

The YouTube comments on Sophie’s #StarSpangledBanner literally got me crying for the past two days… THANK YOU everyone, I can’t express what that means to know that my baby is so loved! ❤️❤️❤️🇺🇸🇺🇸🇺🇸

The world can’t shut up about her

An article by Yahoo News lists Sophie as ‘by far the most talented little girl online!’ She earned this particular compliment by performing Andrea McArdle’s “Tomorrow” from 1980, which was used in 1982’s iconic comedy family drama by John Huston entitled “Annie.” What made the performance all the more appealing was that her mother Victoria was playing the piano in the background.

The Charleston Gazette also mentions Fatu, citing her as a ‘pint-sized singer and aspiring actress’ in 2018, prior to moving to Hollywood. The article explains that her mother is excited for them to relocate to Los Angeles – a studio session is already booked for young Sophie. What she was referring to here was Sophie’s very own first album.

Sophie is today the youngest ever jazz singer to record her own album, producing “Love Is…” in 2018, released a year later. It features six original songs performed uniquely by Sophie, including “Ain’t That a Kick n the Head,” “Goody Goody,” “(Love Is) the Tender Trap,” “All the Way,” “Feeling Good,” and “High Hopes.’

Her website proudly features the said album on the front page, while its About page states that Sophie tends to tour the US while also pursuing a career in acting at Hollywood. Fans can also book their tickets here when there’s an upcoming performance.

Happy One Year Anniversary to @SophieFatu and her first album “Love is…” pic.twitter.com/rJZDVFsbZF

Sophie’s social media career – what she is doing today

Aside from already being a jazz artist at the age of nine, Sophie spends a lot of time producing content for her YouTube channel and Instagram page, though they are both run by her mother to preserve the child’s safety online.

The two accounts are used for very different purposes, however – on Instagram, Sophie’s mother mostly posts daily vlog-type pictures and videos, such as one of the many times when her vocal coach was proud of her. Other posts include pictures of her older sister Vivienne, and younger brother Mark, as well as pianist and singer mother Victoria Fatu, and fitness expert father Brandon Volz.

Sophie’s YouTube channel was actually launched in 2006, which makes it six years older than the child star herself. However, instead of focusing on just Sophie, it’s called “Sophie Fatu and Family,” showcasing various singing projects and talent reels of particularly family members. Some of the videos here are also of a blog nature, but the channel is generally used for music.

One of its most popular videos features Sophie singing “Shallow” along with her mother, with over 4.6 million views. The channel itself is nearing 100 million total views, and has almost 500,000 subscribers.

With a glance at her social media accounts, it’s easy to conclude that Sophie is nowadays focusing on a personal career, mostly using the massive reach of Instagram and YouTube to increase her popularity, while also frequently touring, and even recording albums.