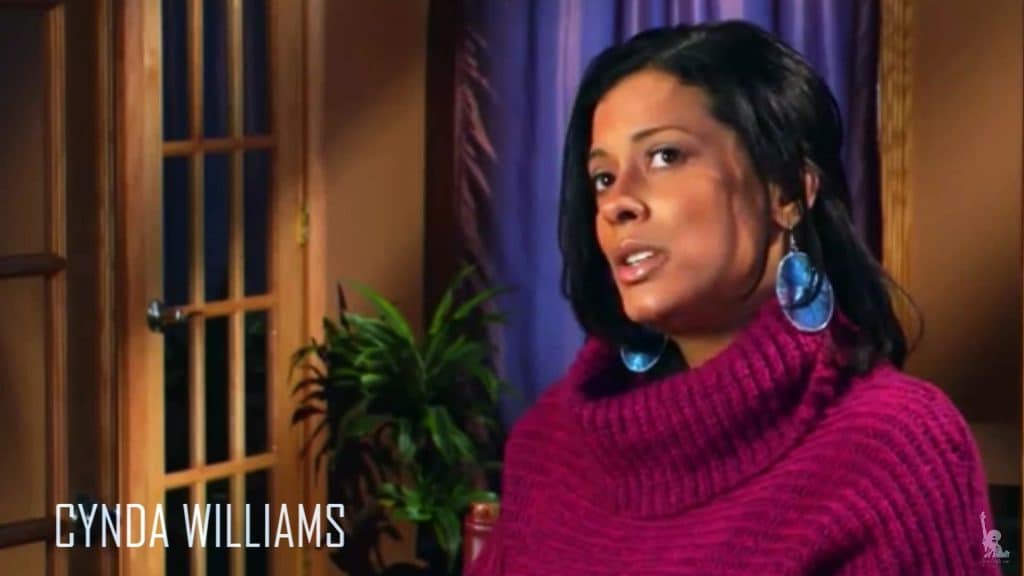 Where is Cynda Williams now? What happened to her? Wiki

American actress Cindy Ann ‘Cynda’ Williams was born on 17 May 1966, in Chicago, Illinois, USA, making her a Taurus. Her mother Beverly Ann Williams worked as a medical lab technician, and her father Charles Kenneth Williams was a police officer. She was raised in Pullman, and attended Bennett Elementary School and Dunbar Vocational High School before moving to Muncie, Indiana with her mother. While living in Indiana, Cynda sang in her grandfather’s church ,and attended Northside High School from where she matriculated in 1984. Cynda earned her theater degree in 1989 from Ball State University, meantime in 1987, she was crowned Ms. Ball State.

Cynda is perhaps best known for her roles in “One False Move,” “Mo’ Better Blues,” “Introducing Dorothy Dandridge”, and “Gang in Blue.”

Cynda changed her name from ‘Cindy’ to ‘Cynda’ in 1989 to avoid being confused with Cindy Williams, an actress best known for her work in “Laverne & Shirley.”

Cynda’s debut feature film appearance was as Clarke Bentancourt in “Mo’ Better Blues,” a 1990 film directed by Spike Lee. Her character was having an affair with Bleek Gilliam who was played by Denzel Washington; Bleek was dating Indigo (played by Joie Lee) while enjoying Clarke on the side. Fans of the film especially remember the scene in which Clarke wore a beautiful red dress while singing “Harlem Blues.”

In 1992 she appeared in “One False Move” as Lila ‘Fantasia’ Walker, and in the “Tales of the City” miniseries on Channel 4/PBS as Dorothea/Dorothy Wilson. The following year she played Rebecca in “Ghost Brigade” which is also known as “The Killing Box”, and “Grey Knight.” Cynda appeared in three films in 1995, as Gidell Ryan in “Condition Red,” Davida Urked in “Wet” and Lisa-Marie Chandler in “The Tie That Binds.” That year, she also played Deletha in an episode of “Fallen Angels” entitled “Fearless.”

1996 was a pretty busy year for Cynda – she played Georgia in “Black Rose of Harlem” which is also entitled “Pistol Blues” and “Machine Gun Blues.” She played Arabella in “Spirit Lost,” Diane in “The Sweeper,” Davida in “Tales of Erotica” and Anita Boyard in “Gang in Blue.” In 1997 she played Erica Rockler in an episode of “New York Undercover.” then appeared as Vanessa Dietrich/Trish in the 1998 film “Caught Up,” as Sarina Classer in “Relax… It’s Just Sex,” in the film “The Last Call” which is also entitled “Stingers”, and played Liz Odis in the miniseries “The Wedding.” She was Vivian Dandridge the following year in the television film “Introducing Dorothy Dandridge.”

Introducing Dorothy Dandridge (1999)Starring Halle Berry, Brent Spiner, Klaus Maria Brandauer, Obba Babatundé, Loretta Devine, Cynda Williams, LaTanya Richardson Jackson, Tamara Taylor, William Atherton, Sharon Brown, Darrian C. FordBased on a true story, this film chronicles the life of Dorothy Dandridge, the first black woman to be nominated for an Oscar for Best Actress. Dandridge (Halle Berry) begins her career working as a nightclub singer before eventually breaking into Hollywood, where she meets her steadfast manager (Brent Spiner) and struggles against racism. Her rise to stardom introduces her to Otto Preminger (Klaus Maria Brandauer), a film director with whom she develops a complicated relationship.https://www.daarac.ngohttps://www.daaracarchive.org/2012/11/introducing-dorothy-dandridge-1999.htmlAvailable on DVD, but it's out-of-print.https://www.amazon.com/Introducing-Dorothy-Dandridge-Halle-Berry/dp/0783116748/

Cynda appeared in two television films in 2000 – “The Courage to Love” as Cecelia Delille, and “Hidden Blessings” as Brandy Taylor. She next played Angela Walsh in “March” and Alicia in “MacArthur Park” in 2001. In 2003 she was Rita Washington in the television film “Violation” and Cheri Fontenot in the film “With or Without You.” In the following year, she played Coach Mary in “Shooter” and in 2005 she played Grace in “When Do We Eat?”

In 2006 Cynda played a Nurse in the television film “Our Houe.” In 2007 she played Sister Grier in the film “Divine Intervention”, and Barbara in “Frankie D.” Cynda played adult Dennice in “Beautiful Loser” in 2008 and Lisa in “Tru Loved.”

In 2012, she appeared as Dede Johnson in “Turning Point.” She played Tammy in “Temporary File” in 2014, Liyah in “72 Hours” in 2015, Doctor Harris in the 2018 film “Ray Meets Helen,” Alderwoman Tyrina in “Black & Privileged: Volume 1” in 2019, and Deb in “The Misadventures of Mistress Maneater.” She also played Officer Jo Allen in the short drama film “Welfare Check.”

Cynda’s most recent roles have been in the 2021 films “Mad as Hell” as Detective Briggs, and “Life Ain’t like the Movies” as Pat Mills.

Cynda is mostly known for her acting career, but she has also experimented with music. She heard in the “Harlem Blues” song on the official soundtrack for the “Mo’ Better Blues” film in 1990. The single did very well, and on 17 November 1990, it reached number nine on the R&B charts. Due to the song’s success, Sony offered Cynda a contract, and she was set to record and release her own jazz album, but after disagreements between Cynda and the Sony team, the deal fell through. Although she hasn’t released an album, Cynda still performs on stage – in June 2018, she sang at the D.C. Jazz Fest.

In 1993 Cynda was nominated for an Independent Spirit Award in the category Best Female Lead for her work in “One False Move.”

Cynda has been married three times. She married actor Billy Bob Thornton in 1990, but they divorced two years later, She then married another actor and producer, Arthur Louis Fuller in 1993, but the pair divorced in 1998. Her third husband was television producer and former college footballer, Roderick Plummer from July 2001 to 2019 – they have a daughter named Sophia Plummer. Cynda spoke about meeting Roderick in an interview with Austin Weekly News – ‘He’s an entertainment lawyer and has been in the business for a very long time. We met because he was the producer of a film I did [“Hidden Blessings”].’

Sophia has a few features from her mother, but she looks a lot like her father. She’s an athlete, and played in her high school’s basketball team, as can be seen on Cynda’s Instagram. She loves hyping up her daughter’s accomplishments – on 13 September 2015, Cynda tweeted a photo of herself and Sophia along with the caption, ‘My love, my daughter is getting her dress for her 1st homecoming dance. Time flies.’

American singer-songwriter, actor, and filmmaker Billy Bob Thornton was born on 4 August 1955, in Hot Springs, Arkansas, US. He’s possibly best known for his performances in the 1992 thriller “One False Move,” “Sling Blade” the 1996 independent drama, 1998’s “Armageddon” and “Simple Plan,” which earned Billy his third Academy Award nomination. As far as his music career goes, Billy sings and plays the drums for rock and country music band The Boxmasters. He has released four albums, “Private Radio” in 2001, “The Edge of the World” in 2003, “Hobo” in 2005, and “Beautiful Door” in 2007.

Billy has married six times, and has fathered four children. He was married to Melissa Lee Gatlin from 1978 to 1980, and the pair have a daughter named Amanda Brumfield. In 2008, Amanda was sentenced to 20 years in prison after being charged with the murder of her friend’s one-year-old child, however, in 2020, she presented sufficient scientific and medical evidence to prove her innocence, and was released. When Melissa filed for divorce from Billy, she listed ‘incompatibility and adultery on his part’ as her reason. Billy next married actress Tony Lawrence in 1986, but they separated the following year, and divorced the next. Billy cast Cynda in his screenwriting debut “One False Move” in 1992; they married in 1990 and divorced in 1992 during the release of the film.

He married Playboy model and bunny Pietra Dawn Cherniak in 1993; they have two sons, Harry James and William, but divorced in 1997, she accusing him of domestic abuse, stating he would even abuse her in front of their children.

Billy was in a relationship with actress Laura Dern from 1997 to 1999, and they were even engaged, but then broke up, and he married Angelina Jolie in 2000. Their relationship was very controversial, and they often made media headlines. Billy is 20 years older than Angelina and they periodically showed PDA, and also wore vials with their spouse’s blood around their neck. In March 2002 the pair announced that they’d adopted a son from Cambodia, but the papers were only registered with Angelina as the parent. They separated in June 2002, and divorced in 2003.

Later that year he began dating Connie Angland, a make-up effects artist, and they have a daughter named Bella. Billy said he would never get married again because it ‘doesn’t work’ for him, but sources confirmed that Billy and Connie married on 22 October 2014 in Los Angeles.

American producer and actor Arthur Louis Fuller was born in Pennsylvania, USA, the date is unknown. His best-known works are 2013’s “Assassins Tale,” 2017’s “Un Amor” and “The Writer and the Monster.” He has only been married to Cynda.

Not much is known about American writer, production manager, football player and producer Roderick Plummer. His childhood is almost a mystery, aside from the fact that he has seven brothers and one sister. He has only been married to Cynda, and has one child, a daughter named Sophia.