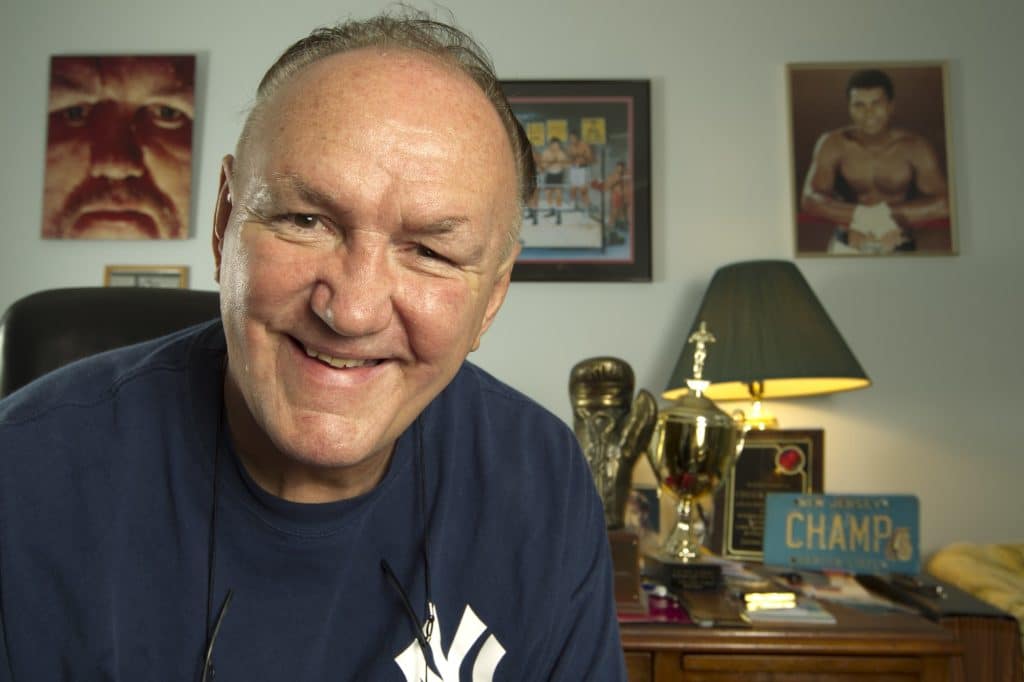 Who is Chuck Wepner?

American former professional boxer and actor Charles ‘Chuck’ Wepner, was born in New York City USA, on 26 February 1939 under the zodiac sign of Pisces. He’s probably best known for his fight against American professional boxer Muhammad Ali in 1975, to whom Chuck fell only seconds before the end of the final (15th) round.

Chuck was born to parents Dolores Hrynko and Charles William Wepner, but his father wasn’t around while he was growing up; he was raised by Dolores and her grandparents, and lived in a converted coal shed for the first 13 years of his life. Chuck has one brother Don Wepner.

Life on the streets of Bayonne in New Jersey wasn’t easy, and it was there that Chuck learned to fight; he revealed that there were people from the naval base and the docks, and that one had to fight to survive. He was highly interested in sports during his teenage years, and Chuck played basketball in the Police Athletic League, and various sports while attending Bayonne High School.

Upon matriculating in 1957, Chuck joined the US Marines rather than pursue a college degree; he joined the Marines’ boxing team, and became a military champion. While serving with the Marines, Chuck pulled out three pilots from their burning airplanes, thus saving their lives.

Career as a boxer

Chuck began boxing professionally in 1964, in the Northeast’s Club Boxing; people began calling him The Bayonne Bleeder, and he won nearly all of his matches. He also simultaneously worked as a bouncer, as boxing wasn’t initially enough to pay for all his needs.

Chuck went on to become the heavyweight champion of New Jersey, but after two losses against American former professional boxer and author George Foreman and the late American professional boxer Charles L. ‘Sonny’ Liston, Chuck’s fans believed that his career was coming to an end; Charles Liston hurt Chuck so badly during the match, that 72 stitches were required to ‘fix’ his face.

Chuck went on to lose against British-Australian former heavyweight boxer and actor Jozsef Kreul ‘Joe’ Bugner, but he then won nine of his 11 following matches, beating both the late American professional boxer Ernest Terrell, who was a former World Boxing Association heavyweight champion, and American boxer Charlie Polite.

For the match against Muhammad Ali in 1975, Chuck signed for a guaranteed $100,000, while Ali was signed for $1.5 million; Chuck was knocked out only 19 seconds before the end of the fight, thus losing via technical knockout (TKO).

Chuck lost to the late French wrestler and actor Andre the Giant in 1976, after he was thrown out of the ring, and fought his final match on 2 May 1978, when he lost to Scott Frank.

Chuck began using drugs following his retirement, and although famous American actor and moviemaker Sylvester Stallone wanted to cast him in his critically acclaimed 1979 sports drama movie “Rocky II”, Chuck failed the audition because he was under the influence.

The police arrested Chuck in November 1985, after having found cocaine on him, and he was sentenced to spend 10 years behind bars in 1988; Chuck spent a year and a half at Northern state Prison, Newark, and another 20 months in an intensive supervision program.

He went on to sue Sylvester in 2003, claiming that he had been used as an inspiration for the movie series “Rocky“; the two men reached a settlement in 2006, but the amount of money Chuck received hasn’t been disclosed.

He then worked as an expert in consumer liquors for Majestic Wines and Spirits, but has recently retired from that, as well.

The documentary movie about Chuck was released on 25 October 2011, entitled “The Real Rocky”, and another film about his career followed in 2012.

"Rocky" – the Sylvester Stallone boxing movie from 1976 – is loosely based on a true story.

The no-name who gets a shot at the world heavyweight championship is based on Chuck Wepner, who became one of only four boxers to knock Muhammad Ali down. pic.twitter.com/rbAtzX9COH

Chuck has only a single acting credit. He played The Driver in the 1985 drama movie “The Gig”, written and directed by Frank D. Gilroy, and which starred Wayne Rogers, Cleavon Little and Andrew Duncan. It follows six amateur musicians who’ve been hired to play in the Catskills for two weeks.

Chuck’s also made a guest appearance in numerous talk-shows, including in a 2012 episode of “Cavuto on Business”, the 2016 episode “Marciano vs. Louis” of “The Garden’s Defining Moments”, and the 2022 episode “Photographic Tribute and Interview with the Real Rocky Balboa “THE BAYONNE BLEEDER”: CHUCK WEPNER” of “Jhon Jatenjor’s Interviews”.

Chuck’s a private man who prefers to keep the details of his love life to himself, but it’s still widely known that he’s married thrice. His first wife was non-celebrity American Lorna Wepner – the date of their wedding remains undisclosed, but they divorced around six years into the marriage, and have two children together, Chuck Jr. and Charlene.

Chuck’s second wife was Phyllis Wepner, and they have a daughter Kimberly together; the marriage fell apart because Chuck was unfaithful.

Since 1995, Chuck’s been married to non-celebrity American Linda Wepner; they don’t have children together, and are today leading a peaceful life in Bayonne.

Chuck hasn’t mentioned other women whom he’s perhaps been with – he’s married to his third wife Linda Wepner as of September 2022, has two children with his first wife Lorma Wepner, and a daughter with his second wife Phyllis Wepner.

Chuck was a good friend of the late American actor and screenwriter Bert Sugar, who passed away on 25 March 2012, aged 75.

Chuck was also an avid wrestler, and wrestled professionally for a couple of years.

He was inducted into the Cauliflower Alley Club Reel in 1996, and into the New Jersey Hall of Fame in 2016.

Chuck loved to travel, and his career as a boxer had taken him all around the world, but he preferred to travel around the US rather than overseas, as he dislikes long flights.

He’s donated money to a number of charity organizations, and to various animal shelters as Chuck’s also a huge animal lover.

His favorite actors are Bruce Willis and Tom Hanks, and some of his favorite movies include “The Sixth Sense”, “Die Hard”, and “Armageddon”.