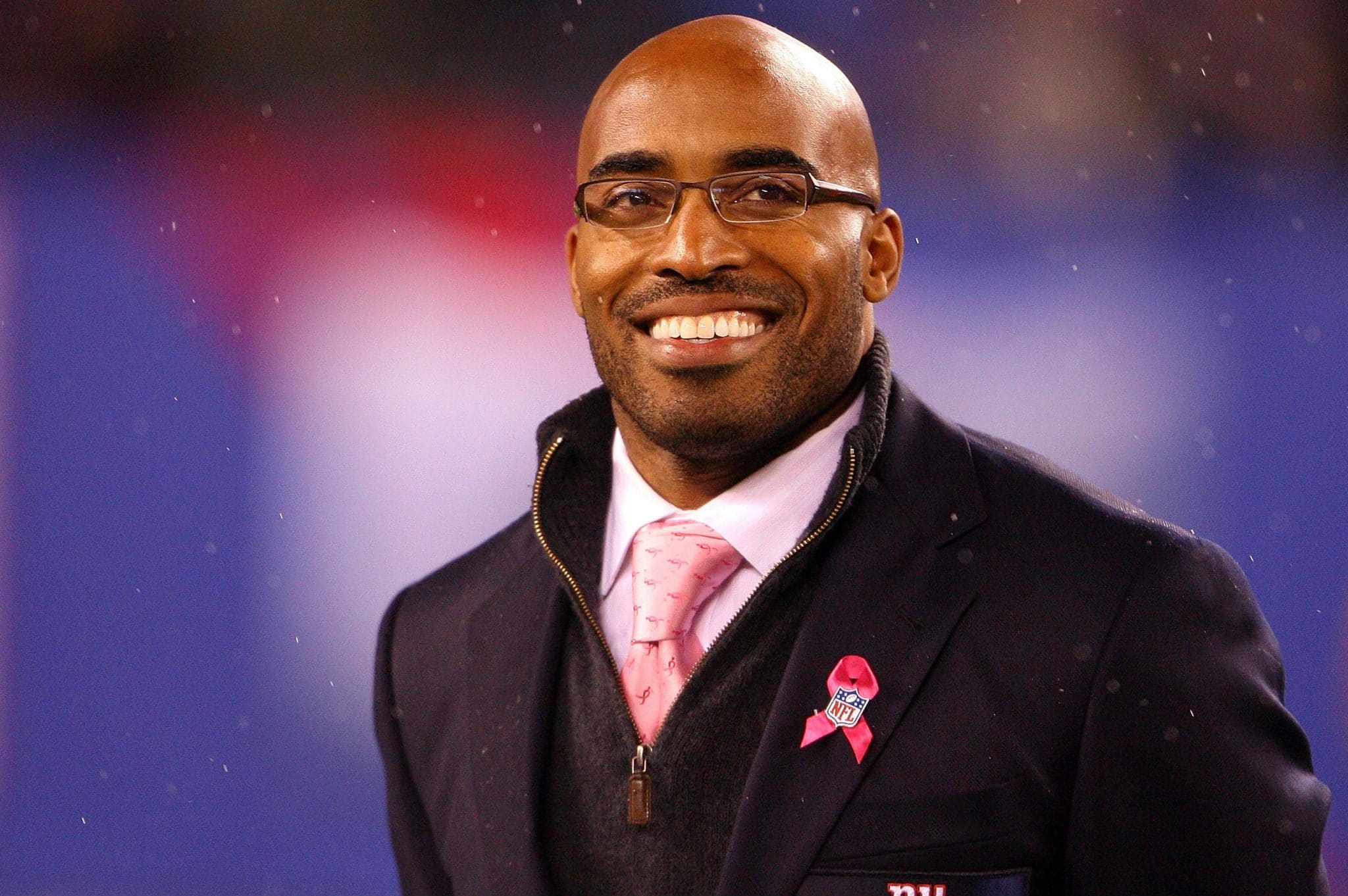 What is Tiki Barber doing now? About Stephen A. Smith’s Warning

Tiki Barber is a retired American Football running back of the National Football League (NFL). He played for the New York Giants for 10 seasons between 1997 and 2006, and later started working as a television broadcaster, primarily for NBC’s “Today.”

Atiim Kiambu Tiki Barber was born on 7 April 7 1975, in Roanoke, Virginia, USA. He was raised alongside his twin brother, Ronde Barber, who was born five weeks premature – he screamed not long after birth, inspiring his parents to give him his birth name, which actually means ‘fiery-tempered king.’ Ronde was also successful in sports, playing for the Tampa Bay Buccaneers as a cornerback, and winning Super Bowl XXXVII against the Oakland Raiders in 2002. They also have an older brother named Tarik Barber. Their mother, Geraldine Barber, divorced their father, Daniel X. Brack – DXB – while they were still young, after which she sometimes had to work two or three jobs to support her children. Daniel wasn’t often there as a father figure, rarely, if ever, providing for his sons.

Tiki was into sports from an early age, which later inspired him to pursue a career in American Football. Tiki was an honorable Cave Spring High School student, with significant academic and athletic achievements, mostly famous for being the “Roanoke Times and World News Male Athlete of the Year,” two-time “Roanoke Times and World News All-Region Pick,” “Roanoke Valley” Offensive Player of the Year both as a sophomore and junior, “Timesland Sophomore of the Year,” as well as for winning the “Top Ten Percent Award” three times. He matriculated from with a 4.0 average, and gained a scholarship to the University of Virginia.

While maintaining his academic concentration, Barber excelled as an athlete, breaking the University of Virginia’s long jump record on his first attempt. He further focused on developing his athletic skills, putting the university’s football team back on the winning streak. Tiki was even named ‘ACC Player of the Year’ in his senior year, making him a star athlete. He graduated from college in 1997.

During the second stage of the 1997 NFL Draft, straight out of the University of Virginia, Barber was selected by the New York Giants. Rodney Hampton’s dismal 1996 and 1997 seasons changed his role, and Barber started for the team when Hampton retired in 1997. In his debut season, he ran a total of 511 yards and scored three touchdowns. Due to a knee injury, he missed out on four games because of sustaining a knee injury in the field, although he started the remaining two.

In 1998, he was removed from the starting lineup as he had an injury-plagued season, before recovering in 1999 with 1,639 all-purpose yards. Barber and the team lost Super Bowl XXXV against the Baltimore Ravens. Following the 2000 season, the Giants signed Barber to a six-year deal, after which he dubbed himself “New York’s happiest guy.”

Barber was a vital element of the Giants’ offensive line-up for four years, which included scoring 203 yards versus the Philadelphia Eagles, one of the best defenses in the league in 2002. His effort boosted the Giants into the play-offs, but they lost in the wild-card round against the 49ers.

in 2004, he had 1,984 scrimmage yards, ran 1,518 yards and catching 578 over 2,096 yards total. Barber beat Rodney Hampton’s all-time running record, as well as the single-season rushing record in the same game set by Joe Morris, on 2 January 2005 against the Dallas Cowboys. In the last offensive play of the game, Barber beat the record to cap the Giants’ 6–10 season on a positive note.

Barber and the Giants both had career years in 2005 – they finished 11-5 under the leadership of Barber and Eli Manning, winning the NFC East. In December 2005 Barber rushed for 220 yards against the Kansas City Chiefs, thus breaking the previously single-game running record, then broke his mark the next year, Tiki’s second 200-yard running game of 2005, after week 8’s 206 yards. Two days after owner Wellington Mara’s funeral, the Giants bested the Redskins 36-0, a fitting tribute to their late owner, who was particularly close with Tiki.

Barber continued to perform well in his last season games in 2006, a rarity for running backs who frequently decline late in their careers. His final season yardage of 1682 yards was more than any other running back’s.

In October 2006, Barber announced his desire to enter retirement as the NFL season came to a close. He was criticized for retiring in his prime, but cited the toll that football takes on a person’s body as his reason for doing so. In the next NFL season, the team that Barber had played for (the New York Giants) won the Super Bowl, and he was present to cover the event but wasn’t well received by most of his former teammates and fans.

Barber became a TV broadcaster after retiring, joining NBC and working on the Today show, NBC Sports, and NBC Universal. Barber joined NBC’s Today and FNIA/SNF on 13 February 2007 – ABC, FOX, NFL and NBC all competed for his services. Barber hosted lifestyle and news programs for Today.

In 2006, Barber described a lunch with US Secretary of State Condoleezza Rice as the highlight of his year. Barber went to air while still in the NFL, co-hosting Tuesday’s Fox & Friends, and during football season, he and his brother broadcast Barber Shop on Sirius Satellite Radio, then-Senator John McCain was his first guest on his off-season radio show. Barber started at WFAN and WCBS in New York, and in May 2008, replaced Willie Geist on MSNBC’s “Morning Joe”.

Barber appeared on NBC’s “Celebrity Family Feud” on 24 June 2008. In November 2008, Barber was featured on NPR’s “Wait Wait… Don’t Tell Me!”, and on Mickey Mouse’s 80th birthday, he addressed three questions.  Barber next got a mobile shout-out on Cash Cab – ‘Which John Steinbeck book follows Tom Joad’s travels?’ The right response was “The Grapes of Wrath”, not “Lonesome Dove”.

Barber portrayed a drill sergeant killed in the 2008 “Fight Knight” episode of “Knight Rider”. He also appeared as himself in many episodes of The Electric Company in 2009. His “persona” is liked by both women and teens, and he’s viewed as a highly personable and frank role model.

Barber met his future long-term Korean-Vietnamese girlfriend Virginia Cha Barber while attending the University of Virginia. They eventually married on 15 May 1999, and the pair lived on New York City’s Upper East Side with Cha’s parents. She was an employee of a company called Zegna, working as a fashion publicist. They have twin girls, Riley and Ella, born 24 May 2010, and sons Atiim Kiambu Junior, and Chason.

Barber and his wife separated on April 5, 2010, when Cha was seven months pregnant with twins, after Barber cheated on Cha with Traci Lynn Johnson, 23, whom he met while she was an NBC intern and worked on Today. Johnson also babysat both of their sons.

On 20 July 2012, Barber and Johnson married in a New York courthouse, just eight days following his divorce from Cha.

Tiki Barber did not play well until he was 27, and had his finest season at 30.

He’s considered to be one of the greatest running backs in the history of the Giants, and during his time in the NFL, he collected earnings of more than $25 million.

According to numerous sources, Tiki Barber has an estimated net worth of close to $100 million. At the time he retired, Tiki was one of the highest-paid players, with yearly earnings above $7 million.

Tiki Barber lives in an 8,000-square-foot Virginia home, which apparently cost $17 million. He also has some of the world’s most costly and luxurious automobiles, including a $2 million Bugatti Chiron.