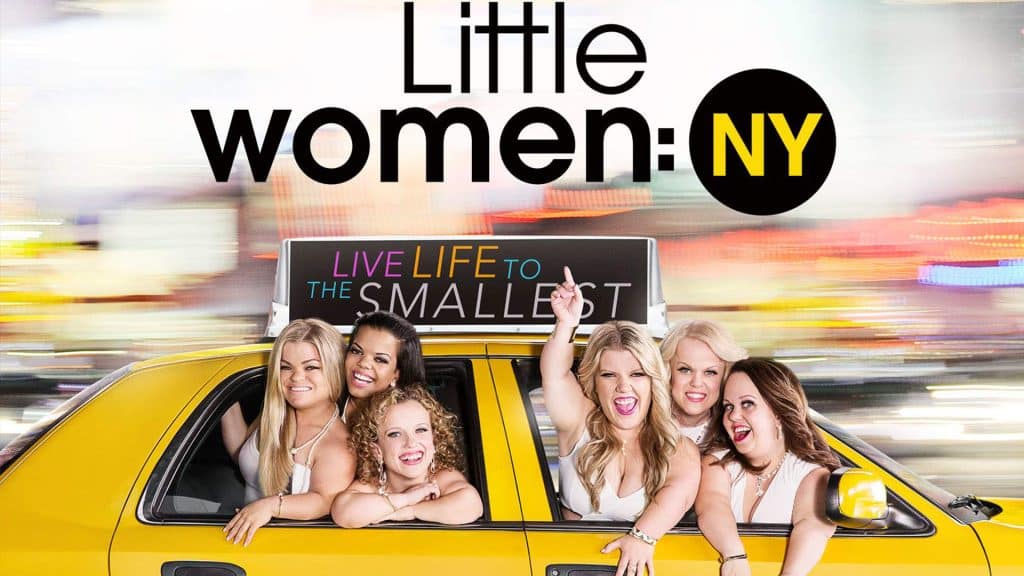 What is ‘Little Women: NY’ cast doing today? What happened to them?

What is “Little Women: NY”?

The Lifetime reality series ran from March 2015 to June 2016 for two seasons with a combined 17 episodes. It’s one of many shows spawned by “Little Women: LA”; in the second season, Misty Irwin, Kristin Zettlemoyer and Jordanna James were replaced by Katie Snyder and Jessica Capri. Both seasons featured Jason Perez, the only male cast member.

Lila Call was born in November 1978, and studied French during her college years. The bubbly blonde previously worked as a film developer at CVS, and also wrote for The Hartford Advocate and The Hartford Courant.

As one of the low-key cast members, there is little available information regarding Lila’s personal life. We know that she is friends with Christy McGinity of “Little Women: LA” fame and that she dated Joe Gnoffo, Terra Jolé’s husband, before he met Terra. Lila is bisexual, and has been in a relationship with a woman since Valentine’s Day 2018, but who shies away from the limelight, and the reality star is yet to share any details about her current relationship.

In the past, Lila suffered from alcohol addiction; she was sober for over a year in the mid-2010s, but then began drinking again. For now, fans assume that Lila has kept on the straight and narrow, but the media personality is so elusive that we can’t be sure.

So, what’s Lila up to these days? She recently celebrated her mother’s 76th birthday in September 2022, but can go months without posting on social media. Her beloved pet dog, Manny, features heavily in her Instagram feed, but there’s no mention of any upcoming projects or a possible comeback to the small screen. Lila is believed to be working an ordinary job, and isn’t interested in the entertainment industry.

Jason Perez made history as the only man to star in the “Little Women” franchise. Born and raised in Brooklyn, he is also a minority cast member of Chinese-American descent. After completing his high school studies, Jason earned a culinary arts degree which would later serve him well in his job as a cook.

Eventually, the multi-talented Jason became a singing server at the restaurant he’d been working at for years. Some of the notable venues he’s performed in include the Radio City Music Hall Christmas Spectacular; he also worked for the Actor’s Equity Union at one point.

"Because of you, I laugh a little harder, cry a little less, and smile a lot more." UnknownWe never thought that our…

Jason is currently studying political science at Queens College. He made a brief cameo in an episode of “Little Women: LA” but seemed disinterested in continuing his promising TV career; similarly, the media personality hasn’t uploaded anything onto his YouTube channel for over two years.

Since 2014, Jason’s boyfriend D.J has been a constant presence in his life. D.J can be seen in many of Jason’s YouTube videos, but is a regular guy who doesn’t court public attention. Jason and D.J have been living together for years and share an undeniably close bond, but don’t seem in a rush to take things to the next level by marrying.

Like Lila, Jason has dozens of thousands of Instagram followers, but posts sparingly. For Dwarfism Awareness Month in October 2022, he shared a touching poem by Eugene Grant, and spoke about his experiences with the condition. Over the years, Jason has been a victim of bullying and discrimination, and captioned his post: “Being kind doesn’t have an expiration date, so if you can help educate, inform, and support then please do so! Sending love to all of those people who stand with us and not against us!”

Although Dawn’s condition hasn’t stopped her from enjoying life, it also means she can’t enjoy it to its fullest; over the years she has suffered over 16 fractures to her legs, and undergone over a dozen corrective surgeries. Before being approached by Lifetime to appear in the series, she worked as a paralegal.

For seven years, Dawn was in a long-distance relationship that didn’t go anywhere. Since 2017, she has been dating Ernest Ott; the couple welcomed a son named Ernest Ott. Jr in February 2019, and became engaged a year later. Ernest and his son also have dwarfism, as does Dawn’s brother, David.

Dawn hasn’t posted anything on social media since Christmas Eve 2021, when she shared a sweet family snap with her partner and son. As such, there is no available information regarding her job or what she’s up to these days. She was described as opiniated, judgmental, and unlikeable by many fans of the “Little Women” franchise.

Jazmin Lang is Dawn’s sister-in-law, born in The Bronx, New York in November 1988, of American and specifically Puerto Rican ethnicity. During her time in “Little Women: NY”, Jazmin was trying to break into the entertainment industry as a performer, but returned to school in 2016 to study for a business management degree.

Jazmin and David’s warm and loving relationship made them firm fan favorites. The couple have been married for almost a decade, and welcomed their daughter, Haven Lang, in May 2018. Haven is also a little person, but Jazmin and David have yet to share what type of dwarfism she was born with. The couple are low-key individuals, and have closed their Instagram profiles so only followers can see their posts, possibly to protect their young daughter’s privacy.

Jordanna James is a Connecticut native who celebrates her birthday on 4th October. Prior to appearing in “Little Women: NY”, she was a professional dancer for Miley Cyrus and other artists, alongside “Little Woman: LA” cast members Brittney Guzman and Terra Jolé.

Jordanna’s boyfriend, Anthony, is of average height. The couple have been in a relationship since October 2013, but are yet to announce an engagement. The performer and dancer co-owns a burlesque troupe named “Sass N’ Betties”; in September 2022, she hit the catwalk for the Runway of Dreams Foundation during New York Fashion Week.

A pitbull lover and avid workout fanatic, Jordanna is the very definition of bookish and busy, as she;s constantly promoting her social media brand via Instagram posts and TikTok videos. Jordanna doesn’t shy away from her sexuality either, and loves posting risqué photoshoots on her social media profiles, which garner thousands of likes.

Kristin Zettlemoyer is one of the show’s most private individuals; hardly anything is known about her personal life. Before becoming a small-time celebrity thanks to “Little Women: NY”, she appeared in a TV documentary series named “Britain’s Ugliest Models”, and is now believed to be doing voiceover work, since cutting ties with Lifetime.

In the past, Kristin was unlucky in love, and divorced her anonymous husband, who also has dwarfism. Since 2016, she’s been married to a man named Josh who was her boyfriend of many years. Kristin has no active social media profiles, and only posts on Twitter every few months.

Misty Irwin is an exuberant esthetician who was born in June 1991. The glamorous blonde seems to have disappeared from the face of the earth since “Little Women: NY” ended; her Instagram, which has only a couple of hundred followers, is private.

Katie Snyder, who joined the cast in season two, was born with hypochondroplasia. Prior to appearing in “Little Women: NY”, she competed in the Micro Championship Wrestling circuit, which is exclusively for little people. Her ring name was Trixie Dynamite, and along with her best friend Jessica Capri, she worked with the famous Hulk Hogan and other big names.

Tonight is the night… Your NOT going to want to miss tonight…
#LWNY#Lifetime #LittleWomenNY #MayThe4thBeWithYou pic.twitter.com/42KP9Ak3kp

Known for her warm and bubbly personality, Katie was a well-liked cast member despite being a newbie. She’s been dating Parnell “PJ” Johnson for over half a decade; their daughter, Kinzley, is four years old, and was born with hypochondroplasia like her mother. Katie didn’t pursue a long-term TV career when her time on “Little Women” ended, and has no public social media profiles either.

Jessica Capri Sloane was born in New Jersey in December 1987, and has achondroplasia. While competing in the Micro Championship Wrestling circuit, her ring name was Jersey Jess, and she rubbed shoulders with many famous people. Jessica holds the title of being the tallest main cast member in the “Little Women” franchise.

Currently, Jessica is engaged to her long-term boyfriend Dru Edwards. Their first child, Jax Nicholas Edwards, was born in November 2020. The New Jersey native currently resides in Las Vegas, and boasts over 60,000 Instagram followers; she’s a health and fitness fanatic, who regularly posts daring photoshoots and bold bikini snaps. Jessica’s son and fiancé, who are of average height, don’t feature heavily on her Instagram or TikTok.

Like any self-respecting reality TV franchise, “Little Women” has seen its fair share of controversy and scandal over the years. For example, Matt Grundhoffer, the estranged husband of “Little Women: LA” star Briana Renee, was accused of sexual assault in 2018 while working at Child Study Treatment Center in Washington. The patient was a minor at the time of the alleged assault; however, Matt was not named as a defendant.

The court ordered personal information, such as Matt’s medical records. According to news outlets, the defendants – the Child Study and Treatment Center and the Department of Social and Health Services – filed a motion for a protective order against the plaintiff. The alleged victim preferred to remain anonymous and claims that Matt was an employee and counselor at the treatment center from September 2009 to November 2010, when she herself was an underage patient.

According to court papers, “Defendants knew or should have known that Grundhoffer posed a danger to Plaintiff and others at CSTC. Plaintiff met Grundhoffer at a time when she was a minor and vulnerable.”

It’s alleged that Matt groomed the plaintiff during their counseling sessions, building up to a romantic relationship that later became sexual. The plaintiff claimed to have developed an emotional dependency on the former reality star, “based on his position of authority and trust”, which was breached when he “pursued a personal and sexual relationship”.

Briana filed for divorce from Matt in November 2017 after his sexting scandals came to light. Less than a fortnight later, she requested a domestic violence restraining order against him for her and their son Maverick. Briana claimed that she found graphic texts between Matt and another woman that involved bestiality, and the proposal of sex acts with minor children. A five-year restraining order was granted by a judge a few months later.

Just two months after finalizing her divorce from Matt, Briana married her boyfriend Tim. After six seasons, she left the show due to Matt’s scandals and the negative effect they could have on her brand. Prior to the sexting scandal, the pair were already going through a rough patch due to Matt’s philandering ways, and had broken up a couple of times despite reconciling later. Little is known about Matt’s legal woes in 2022, and it’s possible that his court cases are ongoing years later.

Although “Little Women” has a diverse cast that includes many minority groups, Terra Jolé was met with backlash after announcing that she was a partner in the Black Girl Moscato wine brand. Apparently, Terra was afraid to tell her friends because “it’s such a controversial name, especially coming from a person who is white.”

Tonya Banks, Terra’s co-star, didn’t take the news well, and walked out of the room when it was announced. Ironically, Terra had asked Tonya to be the face of the wine. Many African-American fans of “Little Women: LA” slammed Terra for what they considered a racially insensitive decision; Terra herself considered it a great business opportunity.