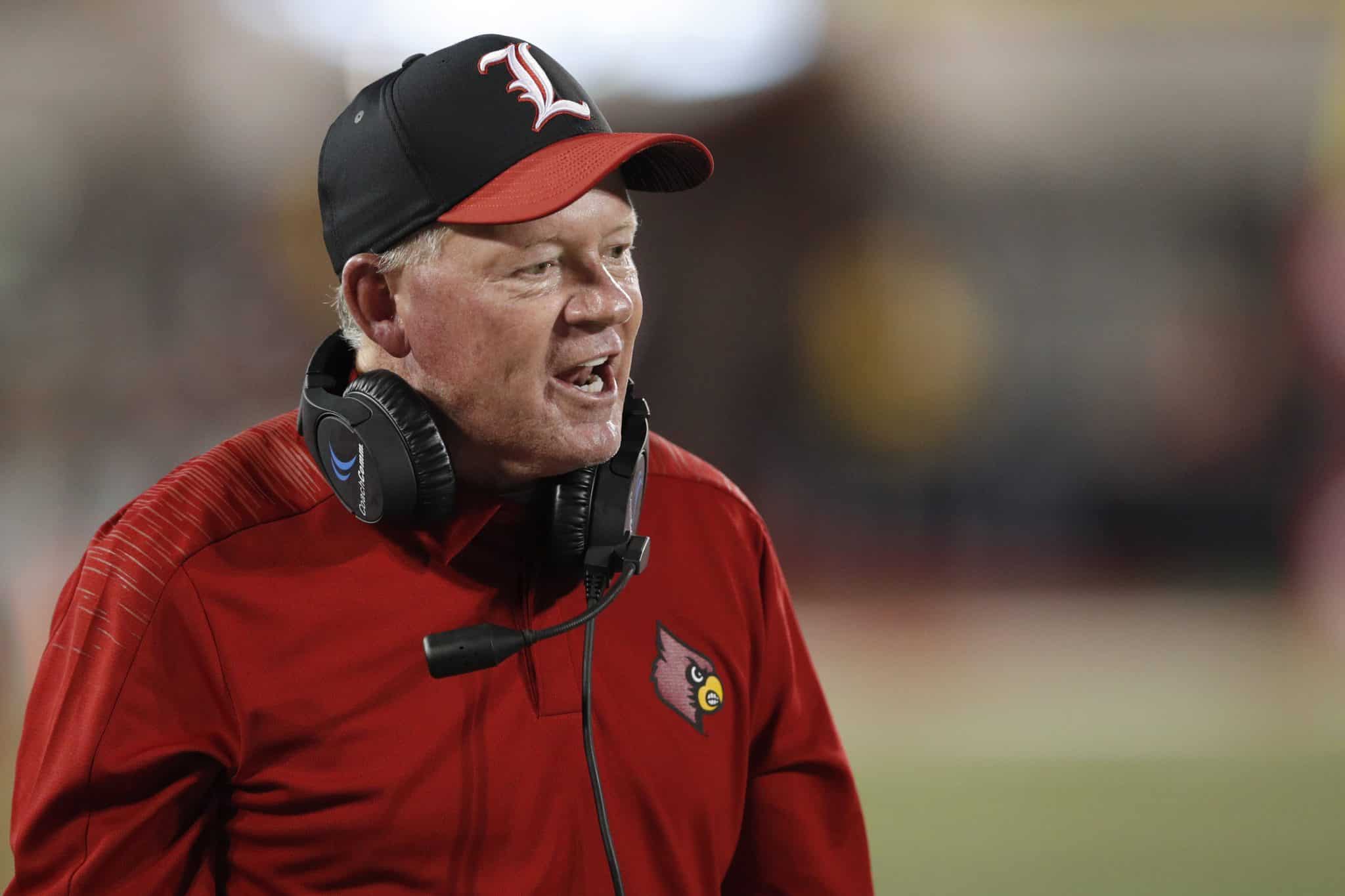 Who is Bobby Petrino?

Petrino is an American Football coach who has primarily coached University teams, but also had a short stint in the National Football League (NFL), serving as the head coach of the Atlanta Falcons in 2007.

What is Bobby Petrino Doing Now?

Since 2020 he has been the head coach of the Missouri State University team, replacing Dave Steckel.

Robert Patrick Petrino was born on 10 March 1961 in Lewistown, Montana, USA. He’s the son of Bob Petrino Sr., who was a football coach in his prime, but there’s no information about his mother in the media. He has a younger brother Paul who is also a football coach, and currently the offensive co-ordinator at Central Michigan University.

While at Carroll College, Bobby played football for the Fighting Saints under his father, who served as the head coach of the university team from 1971 to 1999.

However, he chose to switch back to Carroll College, this time as offensive coordinator, where he stayed for two seasons, in both of which he had the top-rated offense in National Association of Intercollegiate Athletics (NAIA) football.

After the success at Carroll College, he again went to Weber State for the 1987 and 1988 seasons as the receiver’s coach.

His next stop in his early career was the University of Idaho and its Idaho Vandals, where he served as quarterbacks coach under John L. Smith. After a great season, Bobby earned a promotion and was named the offensive co-ordinator for the next season.

The first signs of his career improving was in 1992, when he accepted the offer to work as quarterbacks coach of the Arizona State Sun Devils of the Arizona State University in the PAC-10 Conference. He was the quarterbacks coach for two seasons, during serving under head coach Bruce Snyder and oversaw the progress of the future star Jake Plummer, who went on to win the Pac-10 Offensive Player of the Year in 1996.

After two years at Arizona State, he joined the University of Nevada as the quarterbacks coach and offensive co-ordinator; head coach, Chris Ault, utilized Bobby to his core as the Nevada Wolf Packs were second in the nation in total offense and passing offense, while they finished third in scoring.

Further success followed as he reunited with John L. Smith at Utah State University as offensive co-ordinator for the Utah State Aggies. The duo won the championship in 1996 and ‘97.

In 1998 they both moved to Louisville, leading the Cardinals to the top-ranked team in scoring and total offense in Division I-A.

Petrino experienced top-level football for the first time in 1999, when he joined the Jacksonville Jaguars as the quarterbacks coach. With Tom Coughlin as the head coach, the Jaguars finished the season with a 14-2 overall result, but lost the AFC Championship game to the Tennessee Titans.

For the next two seasons, Bobby was the offensive co-ordinator, but the team failed to post notable results, after which he made the return to university football.

After his short NFL stint, Bobby replaced Noel Mazzone as offensive co-ordinator at Auburn University with its Auburn Tigers football team. This lasted only one season, during which the Tigers improved their offense significantly, however, he chose to leave Auburn and assume the head coach position at Louisville Cardinals, thus replacing his long-time collaborator, John L. Smith, who went for Michigan State.

In the first season as the head coach of the Cardinals, he had a 9-4 record, while in 2004, his team won as many as 11 games with only one lost match. Moreover, they went on to win the Liberty Bowl against the Boise State Broncos.

Official cover of former UofL/WKU Coach Bobby Petrino’s new book, “Inside the Pocket: An In-Depth Analysis of the Xs & Os”.Thoughts?

Under his guidance, the Cardinals became one of the most successful teams, winning all 12 games in the 2006 season, and the Orange Bowl against the Wake Forest Demon Deacons.

His impressive results earned him a 10-year contract worth $25.6 million, however, less than six months later, Bobby was recruited by the NFL’s Atlanta Falcons as their new head coach.

Petrino signed a five-year $24 million worth contract with the Atlanta Falcons as their new head coach. However, after his main quarterback, Michael Vick, was sidelined for the 2007 season, the Falcons were stuck with a negative record of 3-10.

He left the Falcons before the end of the season, although less than 24 hours before, he’d promised Arthur Blank, the Atlanta Falcons owner, that he would remain with the team.

Before his departure, Bobby left a laminated note on the lockers of every player.

His next stop was the Arkansas Razorbacks, where he remained for four seasons, leading them to the Liberty Bowl and Cotton Bowl wins in 2009 and 2011.

In April 2012, Bobby crashed his motorcycle on Arkansas Highway 16. He didn’t sustain any significant injuries, but he hid a secret that would jeopardize his stint as the Razorbacks head coach. It was revealed that he had a mistress, Jessica Dorrell, his student-athlete development co-ordinator for the football program, and that she was with him on the bike when he crashed.

After this became public knowledge, Petrino was put on indefinite paid leave, and later fired after further details emerged, including an undisclosed $20,000 cash gift to Jessica Dorrell as a Christmas present.

Crawl on screen during Bobby Petrino’s coaches show announces the breaking news that he has been fired. (Via ⁦@KySportsRadio⁩, ⁦@SouthernbeLLSU⁩) pic.twitter.com/6ZOrsJoP4d

Bobby was next the head coach of the Western Kentucky Hilltoppers, winning eight and losing four matches before he returned to the Louisville Cardinals in 2014. Despite being criticized for his questionable personality, and the way he treats people, Petrino returned to Louisville, signing a $24.5 million worth contract over seven years.

He remained at Lousiville until the 2018 season, during which he was fired after seven consecutive lost matches and a negative score of 2-8, despite having had a sensational 2015 season with the Cardinals, winning the Music City Bowl against the Texas A&M Aggies as the underdogs.

On 15 January 2020, Bobby was announced as the replacement for Dave Steckel as the head coach of the Missouri State Bears. In the first season, his team had a 5-5 record and was invited to the NCAA Division I playoffs; however, they lost in the first game against the University of North Dakota with a blowout score of 44-10.

He was rather successful in the second year with an 8-4 record, but again his Bears lost in the play-offs. This time their opponents were the University of Tennessee at Martin Skyhawks football team, and the result was 31-32.

In the current 2022 season, the Bears are dealing with a few major roster blows, and currently have a negative record of two wins and three losses.

According to reports, Bobby Petrino is worth $5 million as of mid- 2022, earned through his controversial but rather successful career as a football coach.

Bobby Petrino has been married to Becky since 1985. The couple met while at university, and have since welcomed four children and eight grandchildren. Their son Bobby Jr. is an offensive co-ordinator and quarterbacks coach at Missouri State University.