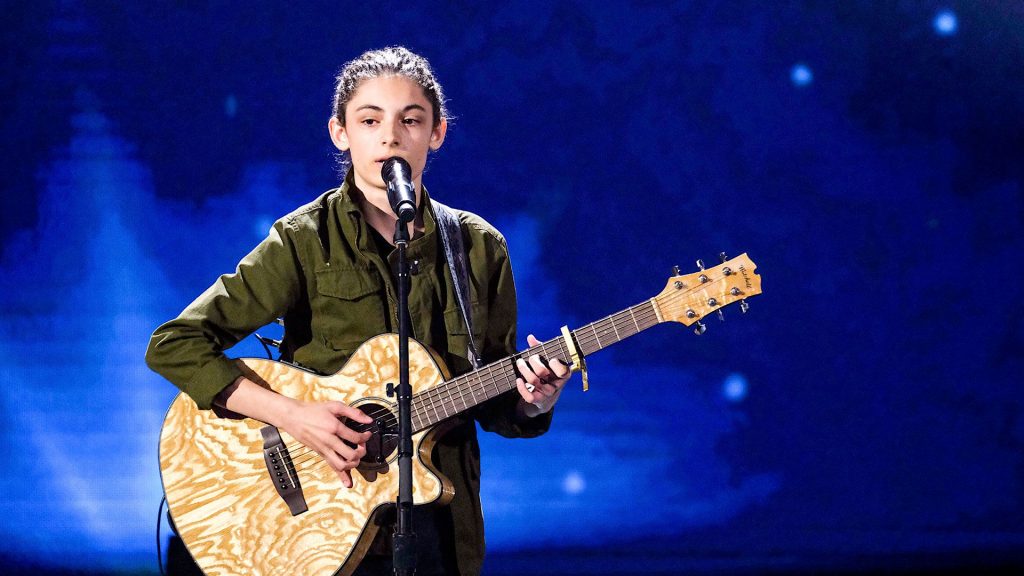 What is Benicio Bryant doing now? What happened to him?

Although already familiar around the world, Benicio Bryant truly rose to fame in 2019, when he auditioned for the 14th season of “America’s Got Talent.” Upon presenting himself, Bryant said about his father Jeremy – ‘I guess, when he was, like, he turned 40, he was like, ‘You know what? I think I’m gonna be a rockstar.’ We were all, like, looking at him, like, okay, yeah, sure.’

Regardless of the reaction, his father actually started taking singing lessons, in which he was joined by Benicio, who at the time learned to play the guitar. That aside, he’s been singing since age two, so there was already a lot of experience to work with.

When asked why he applied to participate in “America’s Got Talent,” Benicio said – ‘I’ve been watching this show for so long, and I wanted to come here so that I can share my music with the world, and uh, I just, I’m so excited.’

He went on to perform “The Joke” by Brandi Carlile, wowing the audience within the first few seconds of displaying his vocal capabilities. The judges were excitedly looking at each other, while the crowd was already screaming. Actress Julianne Hough said ‘I’ve already got chills,’ while her colleague Gabrielle Union stared at Benicio with a big smile of pleasant disbelief.

As the song was nearing its end, with Bryant showing the full range of his vocal ability, the whole audience rose to their feet, as well as the judges. The last one to stand up, of course, was Simon Cowell, giving the boy a smile and two thumbs up after the applause before sitting back down.

Judge Julianne was thoroughly impressed, who went first with her comments, saying ‘Wow. First of all, what a song to choose. You’re the entire package and I just wanna keep hearing you sing.’ Gabrielle continued right after, stating ‘You came out here your complete authentic self, let your voice do the talking, and you connected with all of us. Incredibly talented.’

Howie was also eager to praise Benicio, continuing right after Gabrielle with ‘From the moment the song started, it built, and built, and built, and I went ‘How good is this gonna get,’ and it got great. You’re amazing.’ Bryant uttered a ‘Thank you’ while visibly holding back tears. It was then Simon’s turn.

Cowell had an indifferent face, but great things to say nonetheless, including ‘I tell you what, for anyone who hasn’t been on that stage, you walk on there – it’s terrifying. And I could see how scared you were, how nervous you were, yet you pulled it together. Something about you.’ Normally, that would conclude Simon’s praise of a talented contestant, but Benicio’s uniqueness connected with him on a deeper level, continuing with ‘And for some reason, you remind me of the very first time I auditioned Harry Styles – he had this presence about him. I think you’re a real find. Really.’ Gabrielle’s vote for the contestant was also significant, as she said ‘I mean it’s “America’s Got Talent” and you’re loaded with talent, so it’s a yes from me.’

Although Bryant didn’t receive a golden buzzer, the audience and the judges both went on their feet to clap for him again after he gained four ‘yesses’. Terry Crews and Benicio’s mother watched ecstatically from the side of the stage, clapping and cheering as well. Backstage, Bryant’s comment was ‘Oh my god, I was so nervous about what Simon was gonna say, and he really liked it. I just, it’s so crazy.’

Ozuna and Benicio "Beni" Bryant's duet will leave you dancing in your seats! #AGTFinale

He almost won “America’s Got Talent”

After progressing into the Judge Cuts part of the show, Bryant performed “Here Goes Nothing” – an original song. He was competing with singer-songwriter Jordan Ravi, and apparently did better. He showed up with a guitar, to a massive applause.

Julianne immediately said ‘I have not stopped thinking about you since the first audition, because you blew me away. I gotta say it’s a lotta pressure now because I love you so much.’ More importantly, she asked ‘What are you doing today that is gonna raise the stakes and show us what you got?’ Benicio fumbled with his words a little, saying ‘Sorry, I’m nervous. I’m doing an original song.’

Bryant’s quarter-finals performance had him pitted against African-American singer MacKenzie. All of the judges were completely sold on the quality and emotion of another one of his original songs, entitled “Who I Am.” Both Julianne and Gabrielle stood up to clap with the audience as his voice simmered down.

In the semi-finals he had the whole stage set up to maximize the effect of his performance, with waterfalls on either side that showed a faint image of him singing. The choice was original yet again, being “Fall Apart.” He was voted better than his Asian magician competitor Eric Chien.

I’m so happy I’m going to be performing tonight at the SEMI FINALS at 8/7c tonight on #agt! I’ll be singing another original song so I hope you will tune in!!👍 pic.twitter.com/111eAYILBm

Nearing the end of the 14th season, in episode 1421, Benicio’s penultimate “America’s Got Talent” performance was of the song “Six Strings (Because of You),” which he also wrote. The crowd and the judges loved it, even though the song itself was of a quieter type, and didn’t feature the maximum potential of the boy’s voice.

Finally, Bryant’s last performance was singing a mixture of “Baila Baila Baila” and “Taki Taki” by Puerto-Rican singer Ozuna, along with the celebrity himself joining the boy in a guest collaboration. Although the judges and crowd found it exceptional, the show they put on wasn’t enough to put them past the singing group Voices of Service in the race for fifth spot.

He got more out of the show than expected

Although ultimately bottom five of the top 10 of the 14th season, Benicio found that many people around the world loved his voice, causing him to explode on social networks. Musical producers realized this potential, and scrambled to sign a deal with him. Spotify instantly turned him into a verified artist, following the release of his first single, and success in “America’s Got Talent.”

Bryant ended up signing a record deal with Artista Records, through which many of his singles officially saw the light of day, including but not limited to “Serious,” “Pretty in Pink,” “Sorry,” “Gelato,” “Ghosted,” “Serious,” “WHO HURT YOU?” and, most importantly, “I Can’t Dance to This,” which seems to be his most prominent track, as the singer himself advertises it everywhere.

He revealed things about his childhood in a TEDx talk

Perhaps one of the greatest testaments to Benicio’s talent and uniqueness was the invitation to share his wisdom in a TEDx talk, specifically in Seattle, Washington State USA. As the motto of TED talks is ‘Ideas worth sharing,’ it appears many were interested in the story behind the life and creative process of the young artist. Granted, it was a TEDx show, in which the ‘x’ stands for independently organized.

His total time on the stage was around 13 minutes, which he opened with ‘How are we doing, everybody? How’s everybody feeling today?’ After the applause, he said ‘Thank you guys so much. This first song is called “Tangerine.”’ Right afterwards, he performed “Serious”, then after seven minutes and two back-to-back songs, he stowed away the guitar and took the microphone.

He explained how a musical beginning per se doesn’t exist for him because he’s been singing from as early as he could vocalize music, in his case age two. That apparently wasn’t enough, so Bryant used to literally make up songs and sing them all day throughout most of his childhood.

Naturally, he was also listening to all kinds of artists growing up, and would quickly commit to memory many songs, replicating them to the best of his ability. The most important early moment for Benicio was, in his own words, ‘When I was eight years old I performed in front of people for the first time. And, you know, that was a moment, it was in a talent show actually, in my local town – Maple Valley.’

This was apparently the first time that Benicio got to experience feedback from complete strangers, which has much higher value for any artist. As he explained, ‘it was the first time I performed in front of people, real people, and not the walls of my house, not my family, you know. Other people.’

Further on, the singer explained that his venture into songwriting came only four years later. He did his best to try and find places to perform, following the previous experience, spending as much time as he could on stages, and covering his favorite songs. With a singer’s life beginning to solidify in his mind, Bryant thought that one day he should be creating music entirely his own.

He said ‘I was 12 when I wrote my first song. You know, that’s actually a pretty funny story, because 12-year-olds typically don’t have a lot of life experience, you know? What do you write about when you’re 12? Not a lot of relationships going on, so what do I do? I write a love songs.’

Although it may not sound that way from just saying it, Benicio’s love song wasn’t about a person, but about music itself. He said it showed ‘how much I love it and how much it’s been there for me.’

He sang his first original creation “My Love” to his family, and they initially got the wrong idea. The reaction he got was that he is only 12-years-old, and thus shouldn’t be dating anyone, so the song just had an overall strange taste to it. Bryant explained what it was really about, and after it was received positively, he’s continued writing ever since.

As a full fledged musician in 2021, when the TEDx event happened, he stated ‘I probably have, like, hundreds of songs now. Hundreds. Now, where we are now is, like, coming out of a pandemic, you know, and for musicians it’s harder to perform live, and harder to, you know, get out there.’

He explained that, in spite of difficulties with gaining exposure, as well as spending considerable time on his academic obligations, he’s ‘also writing, singing, producing every single day of my life. Even if it’s good, or if it’s bad, it doesn’t matter.’

He said that his main inspiration in music is that he hopes it impacts someone, someday, as his fascination with it is how it brings everyone together ‘as one, and we can all just be cool.’ He ended his speech with a praise of songwriting, saying that his greatest compliment is when someone hums his song while leaving the show, saying ‘and I hoped that you all might wanna hum this song too.’ With that, he sat at the piano and performed “Sorry.”

As of late 2022, Benicio is as active as ever on social media, coming up with brand new songs every few months. His Instagram page has over 110,000 followers, which he uses it to promote moments from his childhood, interesting bits and pieces of his everyday life, and teasers of songs that he will be releasing.

For example, he posted a fraction of a video of himself singing at a very young age, which further proves that he indeed sang whenever possible. Bryant was slightly embarrassed by it though, saying ‘not this video existing!!!! 😫’ in the description.

On top of that, he also has a YouTube channel, with over 2.3 million views and almost 70,000 subscribers. Its most famous upload is from 2018, when he actually sang “The Joke” with Brandi Carlile herself. Naturally, that’s why he chose it for the “America’s Got Talent” audition.