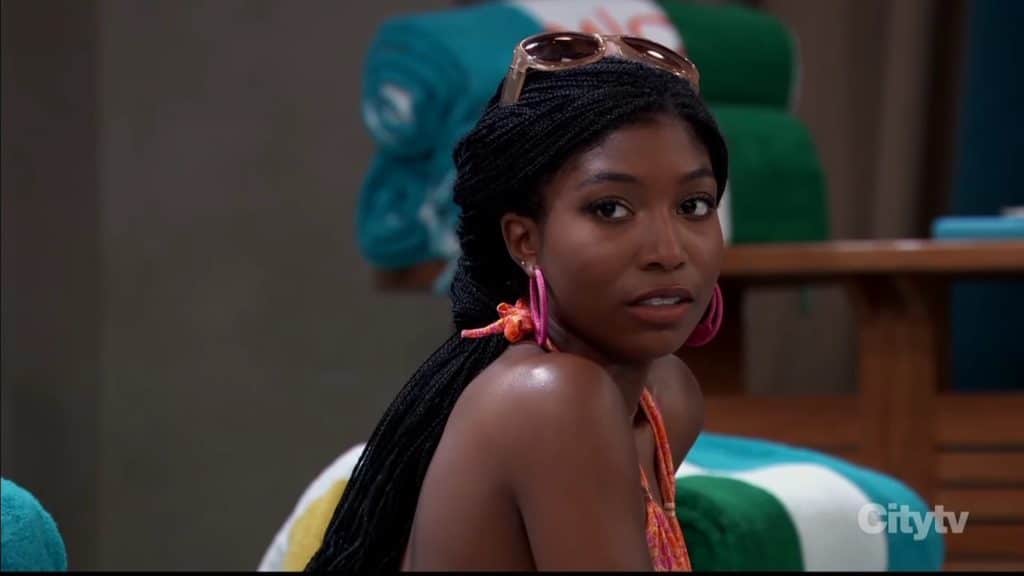 What happened to Trina from “General Hospital”?

What is “General Hospital”?

The brainchild of Frank and Doris Hursley, GH was originally set in an unnamed fictional city, named Port Charles, New York, in the 1970s. The series starred Emily McLaughlin and John Beradino from its beginning, until their respective deaths in 1991 and 1996. Rachel Ames joined the cast in 1964 and left in 2007, making her ABC’s longest-serving actress in a soap opera.

Many are mistaken in thinking that GH was ABC’s first soap opera; that would be “Road to Reality”, which aired from 1960 to 1961. “The Young Marrieds”, GH’s sister soap opera, premiered in 1964 but was cancelled in 1966 due to unsatisfactory ratings. Other spin-offs have included “Port Charles” and “General Hospital: Night Shift”, which aired from 1997 to 2003 and 2007 to 2008 respectively. Over the years, GH episodes have increased in length from 30 to 60 minutes, in response to its popularity.

The Quartermaine and Spencer families have been the show’s focus since the late 1970s. GH boasted the most viewers for a daytime soap opera from 1979 to 1988, with ratings rising in the early 1980s thanks to Luke and Laura, the show’s favorite fictional couple whose wedding was viewed by 30 million people. GH is also attractive thanks to its celebrity guest stars over the years, such as Elizabeth Taylor, James Franco and Roseanne Barr.

In September 2010, GH became America’s oldest soap opera following the final episode of “As the World Turns”. In January 2012, it also became ABC’s only soap opera, after “One Life to Live” and “All My Children” were cancelled. As of June 2022, the show boasts a staggering 15,000 episodes, and has been going strongly for almost 60 years.

Trina Robinson is one of GH’s most-known fictional characters. She first appeared in June 2017, and was played by Tiana Le until 2018. Sydney Mikayla took over the role in February 2019, and became a recurring character later in the same year; Tabyana Ali replaced Sydney as of March 2022.

The co-head writers Shelly Altman and Jean Passanante created Trina’s character, making her Josslyn Jacks’ best friend and a party girl. Trina is often mentioned by her friends, and is currently one of the show’s four teen characters, with the others being Josslyn, Cameron Webber and Oscar Nero.

Trina’s character became more important in 2020. when Marcus Taggert – an already-established character – was reintroduced as her father. Trina’s mother, Portia Robinson, was also introduced to the show, and many storylines were focused on their family dynamics – especially after Marcus’s presumed death, which Trina blames Portia’s ex-boyfriend for.

The show’s writers wrote a potential romance between Trina and Spencer Cassadine in 2021, making him her only possible love interest for now. Time will tell how Trina will grow and evolve, as played by Tabyana; the character became a fan favorite while played by Sydney, who was nominated two years running in the category Daytime Emmy Award for Outstanding Younger Performer in a Drama Series, for her portrayal of Trina.

From 2017 to 2018, Trina was a very minor character in the show. Her first storyline saw her throw a party for Josslyn, which was soon broken up by the latter’s grandmother when the guests began drinking and getting out of control. Later on, she was mentioned by Oscar and Josslyn, but rarely appeared. Her last appearance while played by Tiana Le was in March 2018; Trina attended an alternative prom arranged by Josslyn and Oscar to support a transgender student, but suffered minor injuries due to an earthquake.

Sydney’s version of Trina soon gained a reputation as a loyal friend to Cam and Josslyn. From comforting Cam throughout his family turmoil to accompanying him on a road trip with Oscar – who was terminally ill – and morally supporting him during a court case, many viewers thought that Trina and Cam would end up together. Others complained that Trina had no storylines of her own, and was merely a foil for the friendship group, especially when Oscar’s health declined, and 90% of her screentime consisted of comforting others.

Shortly after Oscar’s death, Cam realized that Trina liked Dev Corbin, who was believed to be Josslyn’s cousin. Nothing came of the romance despite Trina kissing Dev at a Halloween school dance. Dev later revealed that he was an illegal immigrant pretending to be Josslyn’s cousin to avoid being deported, and that he had a crush on her.

Disgruntled viewers were soon pacified by the short-lived apparition of Trina’s father, Marcus. A new storyline saw Marcus’s enemies kidnap Trina and Cam; Marcus later dies after surgery, and Trina kisses Cam after turning to him for comfort. Things became even more dramatic, and Trina focused on her internship so as to avoid the grief she felt over her father’s death and her complicated feelings for Cam.

It was later revealed that Marcus had faked his death, and the complicated father-daughter relationship took a turn for the worse. Critics praised Sydney for her riveting portrayal of Trina during this tough period in the character’s life, with Soap Opera Digest saying: “Mikayla has earned kudos for her relatable, realistic portrayal of Port Charles’s most grounded teen. But when drama surrounding her dialed up, so, too, did our window into her raw and riveting talent.”

Viewers who witnessed the switch from Tiana Le to Sydney Mikayla were understandably confused when Trina seemed to change races. They were also disappointed when Sydney left, and wondered if Trina’s character would be written out of the show, which seems unlikely to happen anytime soon. Through bereavements, heartbreaks, fraud charges and more, Cam, Josslyn and Trina remain as close as ever despite Cam once admitting to having a crush on both of the girls – Trina is still an integral part of many storylines. It remains to be seen whether Trina and Spencer’s romance will blossom into something more.

After 15,000 episodes and almost 60 years on air, writing fresh material for America’s best-known soap opera can be tricky. From amnesia to eating disorders, secret children and long-lost family members coming back from the dead, it seems that there’s nothing original left under the sun when it comes to dramatic TV storylines – until you watch GH. Let’s take a look at some of the whackiest plot twists and developments the show has regaled viewers with since 1963.

First off, there’s the time Ned Quartermaine decided to go against his family’s expectations and become a rockstar. Taking on the moniker Eddie Maine, Ned lived out his musical aspirations and began playing rock, eventually falling in love with and marrying his manager Lois Cerullo. However, he also had to marry Katherine Bell, when the latter began blackmailing his family – and although their marriage wasn’t legal, Ned was the only one who knew, which made for plenty of wild episodes as he juggled a double relationship and a musical career.

Number two on the list is Alan returning as a ghost and haunting his sister Tracy. When the male fan favorite died of a heart attack during the Metro Court hostage crisis, angry fans demanded that he return. The writers compromised, bringing Alan back as a vengeful ghoul, who haunted Tracy for forging his will and ensuring that she received his estate instead of his grandchildren. In the end, the Alan-Tracy storyline was dragged out for so long that people were relieved when Tracy finally made things right, and her brother stopped haunting her.

As the golden boy of Port Charles’s richest family, Jason Quartermaine had a charmed life; he wished to follow his parents’ footsteps by becoming a doctor… However, things went awfully wrong when he was brain damaged in a car accident that was caused by AJ, his alcoholic brother and the quintessential black sheep.

Jason woke up with no memory of his previous life – a common trope in soap operas. To spice things up, GH writers decided that he’d move out, change his name to Jason Morgan, and begin working for Sonny.

Franco – played by James Franco – became obsessed with Jason Morgan and his family, and began terrorizing them. The eccentric artist with a hidden past was actually a warped serial killer whose on-screen antics were )almost) unbearably hard to watch. Eventually, Franco returned (played by a different actor) and became a normal person after having a brain tumor removed.

In-law drama is also a familiar component of soap operas, but Ric Lansing took things one step further as the brother-in-law from hell – which isn’t surprising, considering that his sole purpose for coming to Port Charles was to exact revenge against Sonny Corinthos, his half-brother.

When his wife Elizabeth Webber suffered a miscarriage, Ric kidnapped Carly, Sonny’s pregnant wife, and planned to steal her baby. Sonny thought that Carly, who was missing for months, had been kidnapped by his mob enemy Alcazar – and miraculously, Elizabeth never suspected anything despite Carly being held in a secret room in the house she and Ric shared.

Of course, things didn’t get any easier when everyone figured out Ric was to blame for Carly’s disappearance, as she was kidnapped by Alcazar and subjected to even more unpleasantness. It’s safe to say that Carly didn’t have an enjoyable pregnancy.

Luke Spencer, who’s known for having saved the day several times, was revealed to actually be the head of the Jerome family drug ring in 2014. Viewers were so stunned by the turn of events that they wondered if it really was Luke…as it happens, he was suffering from dissociative identity disorder after a breakdown. Despite Anthony Geary’s stellar performance, GH fans hated the storyline due to a lack of foreshadowing, which gave the impression that the show’s writers had plucked a random mental disorder out of a hat.

Long-time viewers of GH know that the show was considered an adventurous soap opera, with many storylines focusing on spy drama and treasure hunts. In one memorable plotline, Mikkos Cassadine planned to freeze the world by using the Ice Princess diamond in his weather machine. His plan to freeze Port Charles and blackmail everyone was foiled by Robert, Laura and Luke, and he fell victim to his freezing machine. Thus, Helena cursed Luke and Laura, and the famous Spencer/Cassadine feud was born.

Me And A Past Lover.

Luke and Laura’s run-ins with the Cassadines didn’t stop there, as Stavros became obsessed with Laura, kidnapped her, and took her to his family’s private island. During a fight with Luke, Stavros fell down a flight of stairs and died. During her captivity, Laura also managed to give birth in secret Later on, Helena revealed that Stavros was alive and had been cryogenically frozen; this made absolutely no sense, and didn’t further any of the show’s plotlines.

Jason Morgan was believed to be dead when his actor, Steve Burton, left GH. When the veteran soap star Billy Miller joined the show, it turned out that he was Jason 2.0 – with plastic surgery and amnesia. It was then revealed that Miller was Drew, Jason’s long-lost twin brother who’d been implanted with Jason’s memories. Drew only remembered Jason’s life, and had no memory of his own. If you’re confused, don’t worry – so are we, and everyone else.

Last but not least, there’s the time Robin Scorpio befriended an alien. Yes, that’s right; the alien, who was named Casey and came from the planet Lumina, could only go home after finding a special crystal.  Helped by Anna and Frisco, Casey made it home when Robin recovered the crystal from Faison, one of the show’s many villains. This infamous storyline was hugely unpopular, and everyone prefers to pretend it didn’t happen, much like the last few episodes of “Game of Thrones”.

So it continues – for you avid viewers out there who can’t get enough of a 60-something year old soap opera; but hey, popularity is big and profitable business in the entertainment industry!