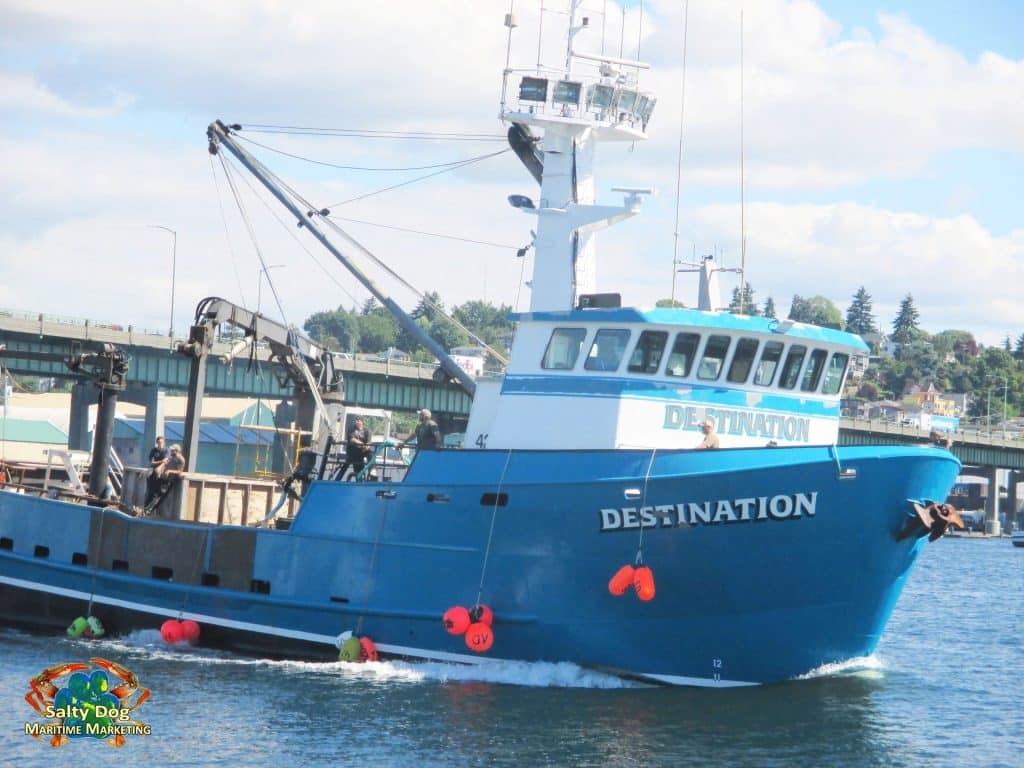 What happened to the ship Destination and crew in ‘Deadliest Catch’?

If you’ve ever wondered what it’s like to have one of the riskiest jobs in the world, “Deadliest Catch” is the show for you. The thrilling reality series, which is filmed in Alaska’s Aleutian Island, premiered on Discovery Channel in April 2005 and shows the annual Alaskan king crab and snow king fishing seasons. With hundreds of episodes and 18 seasons to date, the series has been a roaring success thanks, to the tenacious crab fishermen who allow viewers a glimpse into their lives.

However, the camera crews also deserve a mention, as the extreme weather conditions they and the fisherman face while filming include high waves and gale-force winds. Taking into account that they can only spend a few weeks a year with their nearest and dearest, it’s little surprise that the work environment can be tense or downright hostile on occasion. For some, crab fishing runs in the family – see the Hansen and Colburn brothers – and many of the fishermen are merely following in their father or grandfather’s footsteps.

The US Coast Guard (USCG) is always on standby with rescue squads, as Alaskan crab fishing is a particularly dangerous profession. Three fishing vessels were lost during the show’s first few seasons, filmed between 2005 and 2008: the Big Valley, the Katmai, and the Ocean Challenger. Thanks to the trained rescue squads, dozens of lives were saved, rather than lost, out on the Bering Sea, although they haven’t always been so lucky.

The risky filming conditions make having on-board hosts unfeasible. Bill Petrie and Mike Rowe narrate the UK and North American broadcasts respectively, explaining and connecting each storyline. A mock-up radar screen shows the position of each fishing vessel and switches from one ship to another, making things easier for the audience at home.

The show has spawned many spin-offs; “After the Catch” is a miniseries with exclusive behind-the-scenes footage in which all the captains discuss the highlights – and lowlights – of the season, in a roundtable discussion that sometimes gets heated. “After the Catch” was incorporated into the franchise after three seasons, and has received positive reviews, as viewers get to see the calmer and more humane sides of the captains when they’re under less stress. Blurring and pixelization is used due to the show’s TV-14 rating, blocking out bloody injuries, finger gestures, and foul language.

As is to be expected with a show that has been running for almost two decades, many “Deadliest Catch” cast members have come and gone. The protagonists of the series are the aforementioned Hansens and Colburns, although other captains and vessels will be mentioned.

Sig Hansen is captain of the Northwestern, and runs a tight ship along with his brother Norman, who serves as the resident engineer and deckhand, his daughter Mandy, who is captain-in-training, and her husband Clark, a greenhorn (a newbie on board, sometimes without experience). Sig and Norman are descended from a long and illustrious line of Norwegian fishermen, grew up in the environment and who are considered pioneers of the opilio crab fishing trade, so it’s unsurprising that they have continued the family tradition.

At just 14 years old, Sig began working on his father’s boat, and even skipped out on college to become a full-time deckhand. He became a relief skipper at the age of 22, spending 10 months a year in Alaska; his duties included relieving the captains of the Northwestern, and doing short-haul stints on other vessels.

Just two years later, Sig stepped into his father’s role as the full-time captain of the Northwestern, which is considered one of the safest vessels in history, thanks to having a low serious injury rate, and no recorded deaths at sea. The Northwestern also placed first in the final derby seasons of “Deadliest Catch” in 2005 and 2006, having caught the highest amount of king and opilio crab.

Sig is a man of few words who prefers to let his work speak for him, but who has built a successful brand over the decade, giving TV interviews and co-writing the New York Times bestselling book “North by Western: A Seafaring Family on Deadly Alaskan Waters”. He has previously expressed his desire to cross over into mainstream reality TV, and participate in “Dancing with the Stars” and other shows.

Fans of the fishing series were stunned when Sig announced his departure in September 2010; some reports claim that he abandoned when the show’s executives refused to pay him the exorbitantly high salary he was asking for. Thankfully, negotiations were held behind the scenes, and Sig returned a month later. The fisherman also participated in “The Celebrity Apprentice”, and did voiceover work for “Cars 2” when his busy filming schedule allowed for extra projects.

Next up is Keith Colburn, captain of the Wizard, who was born in California in March 1963. The charismatic fisherman has been married to Florence for over three decades; the couple share two children who, for now, have no intention of working with their famous dad. Keith’s brother Monte Colburn, siblings Tyler and Todd Gateman, and Gary Soper are the other key crew members on board.

Surprisingly, Keith doesn’t come from a fishing family. Aged just 22, he and his best friend Kurt Frankenberg flew to Kodiak, Alaska, with $50 and a tent between them. Once in Kodiak, Keith joined the F/V Alaska Trader as a greenhorn, and slowly but steadily climbed up the ranks. He became a full share deckhand on the Wizard a mere three years later, and spent the next half-decade earning his 1600 ton Mates license and 1600 ton inspected Masters, to work as a pilot. His mentors included John Jorgensen, a revered figure in the industry who was born into a pioneer commercial fishing family.

Keith’s impeccable track record hasn’t come without its fair share of risks: in 2002, the captain took a gamble and ventured out 200 miles further North than any other ship. Luckily, he caught an astronomical 540,000 lbs of snow crabs, over 400,000 lbs more than that year’s average catch. Two years later, the Californian repeated his strategy, and caught 400,000 lbs once again: more than the average and second-best catch combined.

The captain has participated in almost every “Deadliest Catch” spin-off, and can be seen in the franchise’s documentaries and TV movies. However, he’s always looking to expand his brand – from selling dry rubs and sauces to doing public speaking gigs, Keith is a tenacious and charismatic individual who also does social media promotions in his little free time. The popularity of his sauce lines comes from the expertise he gained from his first job in a French restaurant.

Last but not least is the unconventional “Wild” Bill Wichrowski, captain of the F/V Summer Bay. His experience as a commercial fisherman, boat electrician, and naval engineer spans decades, and has made him a prominent figure on “Deadliest Catch”. After completing his high school studies in 1975, Bill joined the navy and moved to the West Coast; four years later, he was lured to the Bering Sea by the moneymaking potential in the king crab fishing industry.

In 2005, Bill semi-retired and began running sportfishing tours out of Alaska and Costa Rica. Three years later, the economic crisis forced him to have a serious rethink about his professional life; by this time, “Deadliest Catch” had exceeded expectations in becoming one of Discovery’s most popular shows. Bill was inspired by the success of the series, and decided to return to commercial fishing: two years later, he joined the show’s sixth season as a captain, employing his son Zack as a greenhorn in 2012.

Bill was born and raised in Irwin, Pennsylvania, and lives in San Carlos, Mexico during the crab fishing off-season. His hobbies include NASCAR, travel, horseback riding, and sports fishing. He has two other children named Jake and Delia, and is an altruistic individual who supports breast cancer charities and other non-profit projects. Some of the many vessels he has captained during his lengthy career include the Cape Caution, Arctic Eagle, Zone Five, and Kodiak.

Since “Deadliest Catch” premiered in 2005, there have been many deaths amongst the show’s cast, although few of them have been linked directly to the series. In the early 2010s, Captain Phil Harris passed away at the young age of 53 from a massive stroke; a few years later, Tony Lara, the former captain of the Cornelia Marie, died of a stroke at 50 years old, after suffering a massive heart attack in his sleep.

Phil Harris was a particularly beloved figure of “Deadliest Catch” who appeared destined for a life at sea. He began working on fishing boats at the shockingly young age of seven; ten years later, he was a crab fisherman on the American Eagle. At 21, Phil was recognized as one of the youngest captains in the industry, running the Golden Viking out of Seattle.  He purchased his iconic vessel, the Cornelia Marie with his wife in 1990; it was named after her, and became one of the reality series’ most iconic boats.

Above all, Phil was a family man who was taught the ins and outs of the crab fishing business by his father. He, in turn, taught his sons Josh and Jake everything he knew, passing on invaluable skills. Phil was a selfless individual who once picked up over 20 stranded fishermen, and supported many charities in his free time; he’s fondly remembered not only by his wife, sons, and family members, but by his fellow cast members and the general public.

The lesser-known Blake Painter and Justin Tennison also passed away at disturbingly young ages. Blake, who was the captain of the Maverick, was just 38 years old when he was found dead at home after an accidental overdose; no official cause of death was announced. Meanwhile, Justin was alone when he passed away at the age of 33, in an Alaskan hotel room, just days after returning from sea.

The most recent death came in December 2020 when Nick McGlashan died of a drug overdose at the age of 33. Captain Bill took his death particularly hard, as was one of the first people to hear the news; a tribute episode was dedicated to the deck boss where his hook was thrown into the ocean one last time and expired flare guns were fired off in his memory. The Tennessee native’s family members and many cast members attended the touching service, including his two young children and ex-partner.

Nick’s passing was tragic but not entirely unexpected, as he checked into rehab during filming for the show’s 13th season, and had to skip out on filming. Over the course of his life, he battled alcohol, heroin, and meth addictions and is believed to have had a turbulent relationship with the mother of his children.

Although most of the show’s deaths have taken place off-screen, one exception is the horrific disappearance of the Destination in 2017, which resulted in the demise of the ship’s six crew members who were on board at the time. During the filming of season thirteen, the Northwestern was notified of the Destination’s disappearance. The USCG tried to locate the missing vessel, which was believed to have capsized after being weighed down by ice; the six crew members on board were Kai Hamik, Raymond Vincler, Larry O’Grady, Darri Seibold, Charles G. Jones, and Captain Jeff Hathaway.

Chris O’Neil, spokesperson for the National Transportation Safety Board, blamed the ship’s lack of preparation for the disaster. He is quoted as saying during an interview: “The captain’s decision to proceed into heavy freezing spray conditions – without ensuring the Destination had a margin of stability to withstand the accumulation of ice – led to the loss of the vessel.”

Thankfully, there have been no similar incidents since, as the captains of “Deadliest Catch” and the show’s production team make sure to uphold safety measures, to avoid a tragedy of the same magnitude.