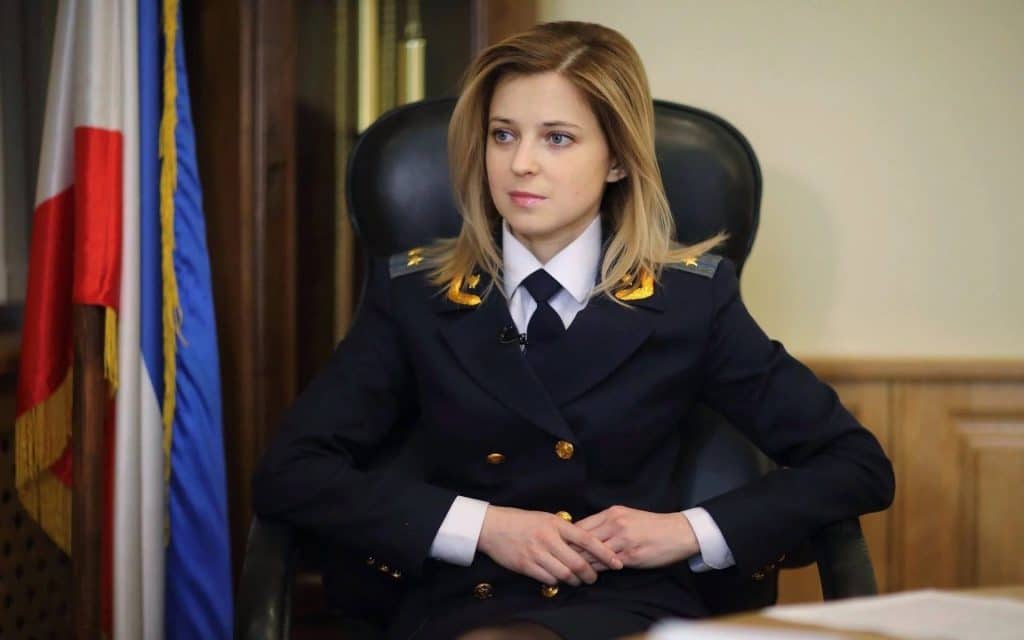 What happened to Natalia Poklonskaya? What is she doing now?

Russian lawyer and politician Natalia Vladimirovna Poklonskaya was born in Mykhailivka village, Voroshilovgrad Oblast, then-Ukrainian SSR, Soviet Union on 18 March 1980, under the zodiac sign of Aries. She’s perhaps best known for the four years which she spent working as Deputy of the State Duma of Russia between 2016 and 2020, while she then chose not to stand for re-election, and she became Russian Ambassador to Cape Verde.

Natalia’s father Volodymyr Poklonskyi and mother whose name hasn’t been revealed, raised her in Mykhailivka village, alongside her older sister Olena Osadcha, born on 10 May 1975, who’s today working as a clinical psychologist in Russia. Volodymyr and his wife are today retired and are living in Crimea; Natalia’s both grandfathers died during the German occupation in World War II.

Natalia grew up being interested in playing various sports, excelling in soccer and tennis, and she also acted with her high school’s drama club, appearing in many plays performed at the school.

Upon matriculating in 1998, she enrolled at University of Internal Affairs in Yevpatoria, from which she graduated with a Bachelor’s degree in 2002.

Upon graduation, Natalia began working as Acting Prosecutor of the Public of Crimea’s assistant in the Ukrainian Prosecutor’s Office, and between 2002 and 2006 was the assistant attorney in Crimea’s Krasnogvardeisky district.

Starting in 2006 and for the following four years, Natalia worked as an assistant attorney of Yevpatoria, while she then spent a year working at the Prosecutor’s Office of Crimea, as the deputy chief of their surveillance law enforcement team.

Posted by Russian United Democratic Party Yabloko on Thursday, May 25, 2017

Natalia worked as the state prosecutor in the case of Ruvin Aronov in Simferopol, Crimean Peninsula in 2011; Ruvin was the manager of the Saki soccer team and former deputy of the Supreme Council of Crimea, while he was accused of being the leader of the Bashmaki organized crime group. While working on the case, Natalia was attacked close to her home, and it’s to this day believed that the attack was ordered by the Bashmaki gang.

At the end of 2011, Natalia became the environmental prosecutor in Simferopol, and after a couple of months the senior prosecutor at the Ukrainian Prosecutor General’s Office in Kyiv. She joined the Court of Appel of Crimea as head of the prosecution, holding the job from October to December 2012.

Between December 2012 and March 2014, Natalia worked at the General Directorate of Internal Affairs as their senior attorney; she tried to resign on 25 February 2014, claiming that she was ashamed to be in a country filled with neo-fascists, but her resignation wasn’t accepted, and she was instead sent on a vacation.

After Russia annexed Crimea from Ukraine on 11 March 2014, Natalia began working as Prosecutor of the Autonomous Republic of Crimea; one of her first works in the new position was the investigation of the violent attacks on the Crimean Berkut members. Also in March 2014, Russia’s Prosecutor General Yury Chaika made Natalia Prosecutor of the Republic of Crimea, and because she accepted the first offer to work as a prosecutor in Russia’s annexed Crimea, Natalia became a wanted criminal in Ukraine.

On 27 March 2014, she was promoted to Senior Counsellor of Justice; she became an official Russian legal officer on 11 April, and Russian President Vladimir Putin made her Chief Prosecutor of Crimea on 2 May.

The European Union forbade Natalia to enter their countries on 12 May, and all her assets were to be frozen; Canada, Japan and Australia followed in the EU’s footsteps, sanctioning her in more or less the same way.

She became the head of the Japanese-Russian Friendship Society in March 2015, and Vladimir Putin made her 3rd Class State Counsellor of Justice on 11 June of the same year; Natalia became a member of parliament in the State Duma in 2016, and thus resigned as Prosecutor General. She held the position for four years, and attracted attention in 2018, when she was the only United Russia member of the parliament to vote against the raising of the retirement age.

She was made the ambassador extraordinary and plenipotentiary on 13 October 2021, but Natalia didn’t want to accept the position, and instead joined the Federal Agency for the Commonwealth of Independent States Affairs as deputy chief on 2 February 2022.

She was fired on 13 June 2022, because she stood against the Russian invasion of Ukraine, and was appointed adviser to Prosecutor General of Russia.

She married lawyer of Russia and veteran law enforcer Ivan Nikolaevich Soloviev in August 2018; even though Natalia didn’t reveal this herself, it was reported by numerous TV stations. The wedding took place in Crimea, but they split in the following year.

Natalia hasn’t mentioned other men whom she’s perhaps dated, and she seems to be unattached as of September 2022, was once married to Ivan Nikolaevich Soloviev, and has a daughter with a former boyfriend.

Natalia’s a member of the Eastern Orthodox Church, and is deeply religious.

She’s passionate about music and is an avid pianist; she played the Aram Khachaturian’s waltz “Masquerade” during her visit to Tsar Nicholas II’s summer residence.

Natalia’s posted over 1,000 pictures and videos onto her Instagram account, and is quite popular on the social media network, as there are over 200,000 people following her today.

Natalia’s net worth’s been estimated at over $1.5 million, as of September 2022.