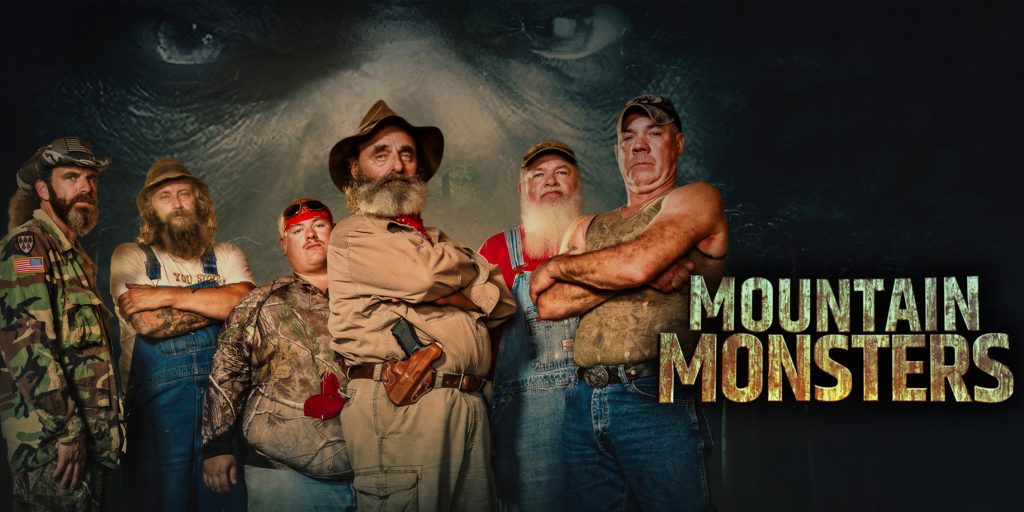 What happened to “Mountain Monsters”?

The existence of supernatural creatures is a integral part of North American folklore, and to this day many people have been curious to know whether some or any of them actually exist. A decent number of reported sightings of creatures such as Bigfoot and Mothman have taken place in the Appalachian Mountains, and this is the main premise of Travel Channel’s cryptozoology-themed reality show “Mountain Monsters”, which follows a group of hunters called the Appalachian Investigators of Mysterious Sightings (AIMS), as they are trying to find proof of existence of mysterious creatures.

During the course of the show, members of the cast have managed to capture pictures of what appear to be Cherokee Death Cat, Grassman and Bigfoot, among other. They also attempt to capture these creatures with the use of traps, but to no avail.

In some cases, the AIMS team place trail cameras and infrared camcorders near the traps, in an effort to capture photos of these creatures.

In seasons four and five, the AIMS team was spied on and sabotaged by the so called Rogue Team. They also appeared in the sixth season, but their screen time was limited, as the show mainly focuses on monster hunting, as in the earlier seasons.

“Mountain Monsters” premiered on 22 June 2013 on Destination America, but has since moved to Travel Channel, owned by Discovery conglomerate. The show is accompanied by the side series “Mountain Monsters: By the Fire”, which features extra facts and footage from various episodes of the main series.

After the fifth season of the show concluded in June 2017, “Mountain Monsters” went on an 18 months long hiatus, as the show’s main star, John ‘Trapper’ Tice wasn’t in good health, which put the future of the series in doubt.

In 2015, Trapper suffered a blood cloth in his leg, leading to series of health issues which later escalated, and kept him from working on “Mountain Monsters”. In an episode of the show, he had a conversation with his co-star, Joseph ‘Huckleberry’ Lott, during which he admitted that his future looked ‘pretty grim’ due to his growing health issues. Despite his tough diagnosis, Trapper kept a positive attitude, saying ‘I’m one of those people that never worried about dying too much. It’s one of those things in life that you gotta face up to. (…) Going through this has taught me you’re only here so long.’

Trapper Tice sadly passed away in December 2019, at the age of 72. His obituary states that he died surrounded by family and friends at the WVU Medicine Camden-Clark Medical Center, after suffering from a brief but serious illness.

‘We are sad to hear about the passing of John ‘Trapper’ Tice, a founding member of the AIMS team and star of Mountain Monsters. Our heart goes out to his family and friend’, the Travel Channel wrote in a Facebook tribute post. On 10 January 2021, the Travel Chanel aired a “Mountain Monsters” TV special, “Monsters: A Tribute to Trapper”.

Trapper was born in West Virginia, USA, on 24 May 1947; raised in the mountains, he developed a passion for nature at an early age, and learned how to hunt by following his father during his hunting trips. In 1965, he matriculated from the Hobart Institute of Welding Technology with a degree in welding.

Well before he became known as a TV personality, Trapper fought in the Vietnam War, in the later years often attributing his survival to his hunting skills, saying ‘I survived Vietnam because my dad made me a great squirrel hunter. Hours and hours in the woods, the Army can’t teach you that. I can see a leaf was turned wrong or anything wasn’t right. I can recognize that well in advance.’

In the early 2000s, Trapper became interested in investigating the mountain regions of West Virginia for strange sightings. With his friends Jeff Headlee and William Neff, he formed AIMS. As the team expanded their field of operation, they began attracting the attention of local media, and were eventually noticed by the Destination America executive producers, who in 2012 signed them for their own show.

At the time of Trapper’s death, his net worth was estimated at more than $700,000, most of which came from his work on “Mountain Monsters”; he was reportedly paid around $20,000 per episode.

Future of the show

Following Trapper’s death, the future of the show became uncertain, and the production came to a halt. However, “Mountain Monsters” eventually returned to the TV screens in January 2021. The first episode of season seven aired on 3 January 2021, was dedicated to the late Trapper Tice, and showed the rest of the cast sitting by the campfire reliving their fondest memories of their late leader.

The show is currently in its eighth season, which started airing in January 2022, but available only on the streaming platform Discovery+. Due to the show’s popularity, it doesn’t seem that it will be cancelled any time soon.

As with most reality TV series, “Mountain Monsters” has generated some controversy during its 10-year-long run. Notably, in April 2015, the host of the rivaling show “Finding Bigfoot”, Matt Moneymaker, took to Twitter to voice his dissatisfaction with “Mountain Monsters”, claiming that it’s scripted and that the members of the main cast are just actors. ‘I actually need to explain this to some people: “Mountain Monsters” is a scripted fictional show. Those guys are all actors. It’s all faked’, he posted.

This prompted a reply from Trapper Tice, who jokingly said that Matt’s show should instead be called “Losing Bigfoot”.

The online feud continued as “Finding Bigfoot” cast member Cliff Barackman joined in, claiming that “Mountain Monsters” is ‘fictional’, while the official “Finding Bigfoot” Twitter account later called the show a ‘fake hoax’, as it entered its sixth season in April 2017.

Matt Moneymaker and Cliff Barackman are not the only people questioning the show’s legitimacy, as many TV viewers and even the show’s biggest fans have had their doubts about how scripted “Mountain Monsters” really is.

After seven seasons, the AIMS team have apparently come up with very little scientific evidence to confirm or debunk the myths of supernatural creatures they’re attempting to hunt down. Instead, they’ve presented the audience with blurry pictures and ambiguous figures which they’ve caught on camera. However, given the existence of Photoshop and similar photo editing tools, this evidence may also be entirely fabricated.

One particular moment from the series made some viewers scratch their heads. Namely, in one episode Huckleberry claimed that he was hypnotized by the Mothman, which a lot of people found hard to believe. However, there are a lot of elements to the show which aren’t scripted. Its co-creator, Colt Straub, believes that the cast is what makes it as successful as it is today, because they are relatable and authentic.

On the other hand, it appears that fans enjoy the show either way. ‘I do know it’s fake, but I enjoy the lore and mystery of it’, one user wrote on Reddit.

While certain elements of the show may be scripted, it still manages to capture the mystery surrounding the creatures from North American folklore, and is certainly quite truthful in describing their cultural significance, which is why it remains so loved.

The most notorious creatures mentioned in the show

The most well-known supernatural creature believed to inhabit the Appalachian Mountains is Bigfoot, also commonly referred to as Sasquatch.

It was heavily talked about in the show, with numerous episodes dedicated to attempts of finding and capturing the mysterious monster. Bigfoot is often described as a tall, muscular biped, covered in dark brown hair. Common descriptions also include broad shoulders, exceptionally long arms and no visible neck, while there are also reports of it glowing in the dark.

The legend of Bigfoot originates from Native Americans who lived in the region. The oldest evidence of its existence comes from petroglyphs depicting a large humanlike creature, which are estimated to be more than 1000 years old. French and Spanish explorers who came to North America in the 16th century have also told tales of encountering creatures which fit into the description of Bigfoot. While there have been many documented claims of Bigfoot encounters, scientists are wary of its existence, providing various possible explanations for the phenomenon. Most sightings of Bigfoot are attributed to being American black bears, who have been observed to occasionally walk upright.

There is also an unconfirmed theory which claims that the creature described by Native Americans is actually a type of a primate which has become extinct.

“Mountain Monsters” have also dedicated numerous episodes to creatures similar to Bigfoot, which are often described as members of the Sasquatch family, such as Grassman, Yahoo and Wildman.

A creature more specifically tied to West Virginia and the Appalachian region is Mothman. It’s described as a humanoid with wings and moth-like facial structure. It was allegedly seen for the first time in the Point Pleasant, West Virginia area in November 1966, which was reported by the local newspaper with the title ‘Couple See Man-Sized Bird … Creature … Something’; the story was soon picked up by national news outlets and spread across the US. In December of the following year, the collapse of Silver Bridge in Point Pleasant killed 46 people, which gave rise to the legend of Mothman, as he was believed to have caused the incident.

Since 2002, Point Pleasant has been holding the Annual Mothman Festival, and in the following year, as part of the festival, a 12ft (3.6m) tall statue of Mothman was uncovered. The festival was attended by the “Mountain Monsters” cast on several occasions, and they were also featured as guest speakers.

Another creature believed to be native to West Virginia is the so called Grafton Monster, a large humanoid cryptid that was reportedly seen walking in the forests outside of Grafton, West Virginia. According to reports, the creature is extremely tall, has no visible head and appears to have hairless seal-like skin. “Mountain Monsters” dedicated an episode of season three to finding proof of the existence of the said creature, and captured videos of what appears to be the Grafton Monster.

The AIMS squad primarily works in the forests of West Virginia, which is where the majority of their show is filmed.

Initially, almost all of the episodes were set in ‘The Mountain State’, before the show became popular and the filming budget increased. It has since expanded to other parts of the Appalachian region, which spans a large area of North America.

Several episodes of the show were filmed in Ohio, most notably about the Ohio Grassman and Hogzilla. Some scenes were also filmed in the Salt Fork State Park in Guernsey County, the largest state park in Ohio.

Furthermore, the AIMS team travelled to Pike County, Kentucky to film an episode about the creature called Hellhound, while some episodes about Bigfoot were filmed in Central Kentucky.

Other filming locations include North Carolina – the home to the notorious Cherokee Death Cat – and Pennsylvania, which has a group of Bigfoot hunters known as the Thunder Brothers.