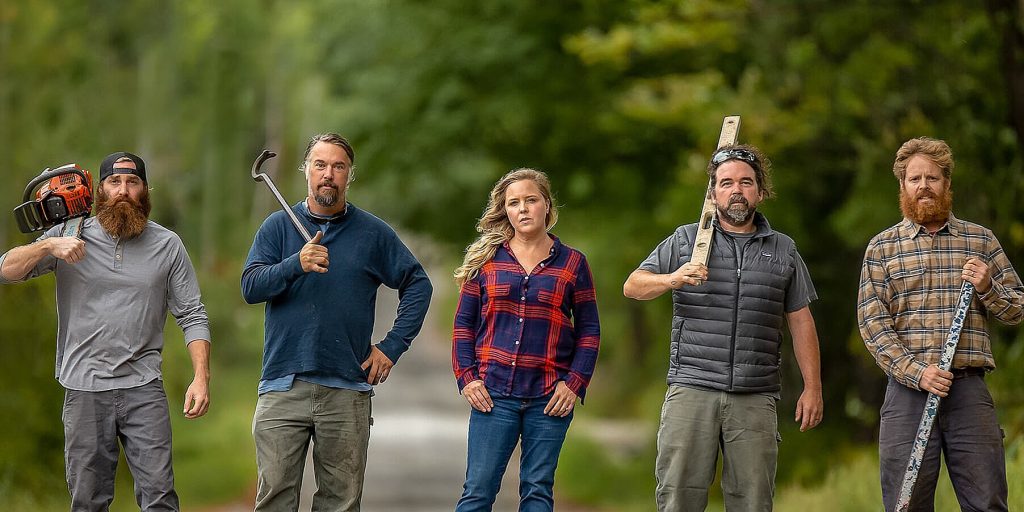 What happened to “Maine Cabin Masters”?

What is Maine Cabin Masters?

In an attempt to save some of Maine’s most historical properties, Chase Morrill and his family have been traveling around the state since 2017, spawning a hit reality show and amassing millions of fans in the process. Since its premiere on Magnolia Network (formerly known as the DIY Network), “Maine Cabin Masters” has been one of the highest-rated programs in its category, and currently boasts seven seasons.

In 2015, a family friend put the Morrill siblings in touch with a Denver-based producer, who was looking for a Maine carpentry crew to restore old cottages and log cabins for a new program. The show’s pilot was filmed in early spring of the same year.

The dynamic stars of “Maine Cabin Masters” are Chase, who is a successful contractor, his sister Ashley who works as a designer, and her carpenter husband Ryan.

The other two cast members – Matt Dix and Jared Baker, affectionately nicknamed “Dixie” and “Jedi” – are master carpenters and also an integral part of the show.

In every episode, Chase introduces Ashley and Ryan to a different cabin and its owners, with most of the properties starting off in rundown condition. Then, a deadline and budget are set, and the cast members do their best to restore the cabins, occasionally adding solar panels and other modern features. Each episode ends with the Cabin Masters showing the owners their renovated cabins, and handing over the keys.

Each restoration is a team effort, with Chase leading the project. Ashley is in charge of choosing color schemes and obtaining culturally unique objects to lend a personal touch to each cabin. Ryan, Dixie, and Jedi then bring the vision to life with their skills. The show’s popularity is partly thanks to the simplicity and rustic elements of the finished works, as the crew prefer authentic décor and shy away from overly modern aesthetics.

“Cabin Masters” as we know it today comes from Chase and Ashley’s childhood love for the countryside and renovation, which was instilled in them from a young age by their parents Eric and Peggy. The Morrill family patriarch was born on 4th November 1946 and studied in Augusta, Maine, matriculating from Cony High School in 1965.

After high school, Eric enlisted in the US Army, and served in Vietnam and Germany before travelling around Europe, where he’d meet his future wife. Following a whirlwind romance, the pair tied the knot, and then enrolled at Farmington’s University of Maine, graduating in 1974 before starting a family.

For most of his life, Eric worked in the social services field while building and renovating houses on the side. In his golden years, the Maine native took up many interesting hobbies such as creating metal sculptures, building furniture, and collecting knickknacks which he fondly nicknamed “treasures”.

The North Wayne Schoolhouse, a 1854 property which received the Maine Preservation Honor Award in 2010, was his biggest project.

Described as a “creative and talented man of many interests”, Eric definitely set a good example to his children and four grandchildren. As the oldest of 11 siblings, the Morrill patriarch is fondly remembered to this day, and Chase and Ashley often speak of his positive impact on his family and community.

Sadly, Eric passed away in 2014 following a battle against cancer.

A wealth of entertaining reality TV shows have been filmed in Maine over the years, with “Maine Cabin Masters” being the most popular by far. Grueling outdoors work is a near-constant theme of these beloved programs.

From 2012 to 2016, “North Woods Law” gave viewers an interesting glimpse into the lives of Maine Warden Service workers.

From corralling stray wildlife to catching unlicensed hunters, the wardens provided fans with plenty of material. Nevertheless, the series was moved to New Hampshire when it was alleged that the camera crew had influenced an investigation into possible poachers.

Predating “North Woods Law” is the story of the Pelletier family, “American Loggers”, which aired from 2009 to 2011 on the Discovery Channel. Thanks to the exposure, the family embarked on a business venture with the Pelletier Loggers Family Restaurant Bar and Grill, based in Millinocket; sadly, the eatery was closed permanently in 2015.

“Down East Dickering”, a History Channel favorite from 2014 to 2016, saw real-life Maine dickerers meet up at Uncle Henry’s pawn shop to buy used goods, before getting in touch with sellers to bargain a suitable price for their wares. Funnily enough, very little of the show was filmed in the state’s down-east region; the program was eventually cancelled after just two seasons due to low ratings.

Perhaps the most unconventional show to come out of Maine – “Tirdy Works” – features the eccentric artist Mary Wichenbach and her team creating novelty objects such as home décor and jewelry, out of moose dung. The show debuted in early 2020 and has yet to be renewed for a second season, although TruTV hasn’t officially canceled the program.

Nobody’s perfect, so it comes as no surprise that the team of “Cabin Masters” has committed some minor faux paux, despite being experts in their fields. While working on a winter project, Chase took the locks off a cabin’s windows to stain them, not expecting them all to blow open overnight. “When we returned, it was 20 degrees inside,” Ashley confessed.

Another incident saw the crew’s truck break down while transporting furniture: when the tow came, the vehicle’s keys had been left inside, leaving the team stuck with two useless trucks. The third humorous tale, in which Chase removed a cabin’s roof ahead of a storm, led to the tarps blowing off and the rain soaking everything.

Nevertheless, despite the occasional hiccup, the homebuilders almost always save the day. Viewers have few complaints about the show, with the cast being described as charming and down-to-earth, and many have even been inspired to travel to Maine after watching the Cabin Masters at work.

However, the mysterious departure of Lance Gatcomb after season four left many viewers crestfallen. The lovable construction worker was considered a core member of the show thanks to his memorable antics and affable personality – in one episode, while the rest of the crew were hard at work finishing a project, he played up to the cameras with some impressive motorboat stunts.

“I hate it that Lance left the show,” one morose fan Tweeted. “He was always good for some comedy relief”. Lance’s lack of social media, combined with the fact that none of the current cast members have commented on the situation, has led to some outlandish theories regarding his disappearance; however, as the builder married in 2016, the general consensus is that he left the show to focus on his wife and family.

Despite all reality shows having a scripted element to them, nobody doubts that the on-screen chemistry between Chase and the rest of the cast is genuine. The real question is: how do the Cabin Masters work so cheaply?

Impossibly low budgets have become a running joke amongst viewers of house-hunting and home renovation programs, and the Magnolia Network show is no different. One incredulous fan asked: “How do you possibly get so much done on these budgets? We don’t believe you can do all this for those prices”.

According to the official “Cabin Masters” website, all the budgets are legitimate, as they replied: “The short answer is yes, but it’s a great question that deserves a detailed explanation, so we have decided to give this discussion its own web page”. Although said webpage is still being worked on, internet sleuths think they’ve figured out what the ‘detailed explanation’ is.

In other home renovation shows such as “Barnwood Builders” and “Fixer Upper”, the network foots the bill for the labor costs. Although the cast’s exact salary per episode remains a mystery, we calculated that Chase earns almost six figures per season. It’s more than likely that Magnolia Network is paying for most of the renovations, while local businesses also provide free or discounted products, for a chance to somehow appear in the show.

The latest episode of “Cabin Masters” aired on 21st February 2022, and it’s expected that the show will be renewed for a seventh season. When the now-defunct DIY Network became Magnolia, fans worried that the renovation show would be pulled: however, given that millions of viewers tune in every week, it seems an unlikely prospect.

Despite their popularity, Chase and the cast are rarely active on social media, preferring to keep their personal lives to themselves. With under 10,000 Instagram followers, most of the contractor’s lives away from the screens is a total mystery, although he’s shared the occasional snap of family vacations and get-togethers.

After graduating from the University of Maine, Chase married his long-time sweetheart Sarah, who was born in North Andover, Massachusetts. Having little interest in the family business, Sarah is a nurse working at the Maine Primary Care Association. The couple have four children, Maggie, Fletcher, Ava, and Nori, and reside in Augusta.

As for Ashley, she and Ryan don’t have children, and are apparently content with their Labrador retrievers. Ryan is the more extroverted of the two, and enjoys keeping fans up to date with the couple’s comings and goings, which include skiing trips, concerts, and other fun excursions when they aren’t hard at work. In fact, the dynamic duo spent Christmas 2021 on their own private beach in Puerto Rico, a well-deserved break from their jam-packed schedules.

Speculations regarding Ashley’s possible pregnancies or illnesses have been floating around the internet for a while, but reliable sources confirm that the designer has no health problems for now.

Since their wedding day in 2014, the couple have settled down in Augusta.

The show’s master carpenters Jedi and Dixie have also garnered loyal fanbases thanks to their banter and impeccable work ethic. In his spare time, Jedi can be found “playing outside on the water, on a mountain, roaming the city, exploring the woods or at the local watering hole enjoying some good company”. As for Dixie, he dreams of visiting Alaska one day, and meantime enjoys traveling to Northern Maine.

As mentioned, Chase and Ashley’s love for renovation comes from their father Eric; following the success of “Cabin Masters”, the brother-sister duo opened the Kennebec Cabin Company, a specialty retail shop which showcases culturally relevant artworks and other souvenirs from Maine. However, what many fans are asking is: exactly how much are the Morrill siblings and Ryan worth?

In a July 2020 interview with Forbes, Chase revealed that the crippling coronavirus pandemic had led to a boost in business. To those who feared that the quality of life in metropolitan areas would go down, a simple rural life began to look more and more attractive, especially after spending months bound by lockdowns and other restrictions.

“We’re seeing a massive wave of people who are acting on their long-time desires to have an escape,” Chase confided, while Ryan explained that many people “never really left the country in spirit”, simply relocating to big cities for work reasons.

Although living off-the-grid might seem impossible to some, Chase and the rest are there to help, with the more practical elements such as water catchment systems and renewable power sources. Thanks to the upwards trend in country living, it’s little surprise that the contractor’s net worth is reputedly over $600,000, while Ashley and Ryan are worth a combined $850,000.