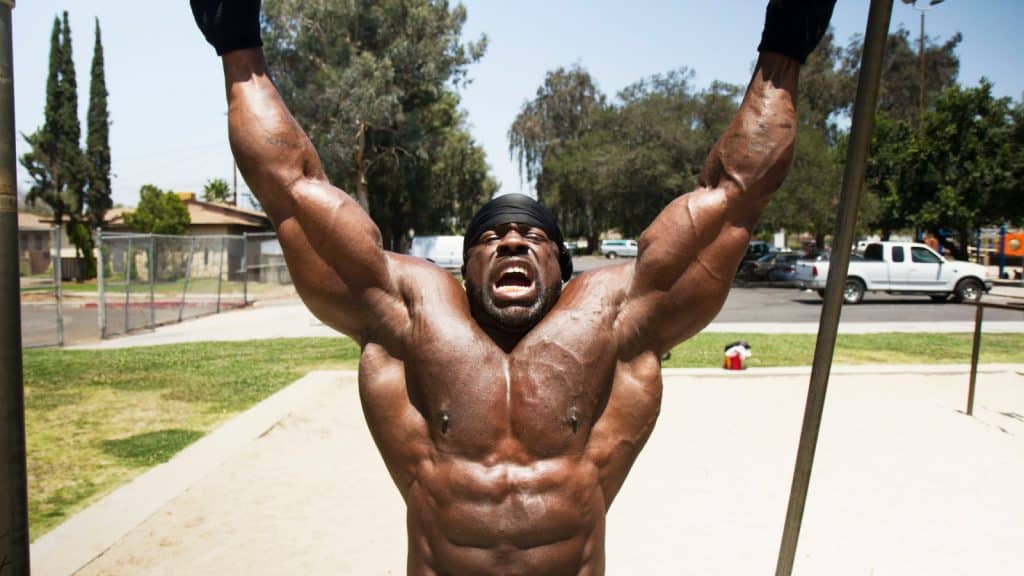 Who is Kali Muscle?

Kali ‘Muscle’ Kirkendall was born in Oakland, California USA on 18 February 1975 – his zodiac sign’s Aquarius, and he holds American nationality. He’s an actor, producer, composer, YouTuber, and bodybuilder with more than 20 acting credits to his name, while Kali’s perhaps known best for his portrayal of Mikey in the 2021 family comedy movie “The Dog Who Saved the Holidays”, directed by Michael Feifer, and which starred Joey Lawrence, Peyton List and Gary Valentine. It follows the Bannisters who’ve brought the puppy Eve home, and their dog Zeus seems to be getting along with Eve just fine; the film was nominated for a Young Artist Award for Best Performance in a DVD Film – Young Actress (Caitlin Carmichael).

Kali was raised in Oakland alongside his two (some sources claim three) siblings, by their mother who worked multiple jobs to financially support herself and her children; it’s believed that Kali hasn’t met his biological father, but got along well with his step-father.

He became interested in sports when he was nine years old, and in high school wrestled, played basketball and football, and also ran track. Kali was 16 when he began working out at the gym, and then became focused on being his high school football team’s running back; he was even employed at the 24 Hour Nautilus Gym, earning just enough money to save for himself.

Upon matriculating in 1993, Kali was offered a scholarship by Fresno State University, however, his brother then accidentally killed himself with a gun, and this led Kali to make several poor decisions in life, including not to attend college.

Bodybuilding and problems with the authorities

Kali became involved with gangs, and was in 2001 arrested for having committed a series of robberies, and sentenced to spend 11 years in San Quentin State Prison, which he’s stated did him a world of good. He read numerous books during those seven years (as he was released in 2008, four years earlier) and worked out at the prison gym nearly every day.

Following his release, Kali launched his YouTube channel, became an actor, and started giving lectures talking about his transformation and working out at workshops around California.

Kali launched his self-titled YouTube channel on 10 April 2008; it’s today subscribed to by more than 2.6 million people, and numbers over 500 million views of all his videos combined. Most of these feature Kali working out, although he also enjoys taking on the most popular internet challenges, and pranking his friends. Here’s three of Kali’s most popular YouTube videos:

His #1 video “Kali Muscle Chest Workout w/ 200lb Dumbbell Press” has been viewed over 21 million times since 15 March 2015, and features him working out at the gym.

Kali’s second most popular video “Bodybuilder doing Too Much…” has been viewed over 20 million times since August 2022, and it’s a short comedy clip featuring Kali and his bodybuilder friends.

His #3 video “Cooking A High Calorie Meal – Kali Muscle” has been watched over 20 million times since 16 April 2015, and features Kali preparing himself a high-calorie meal.

Kali has another YouTube channel, “Hyphy TV”, which he launched on 25 May 2017; it’s today subscribed to by close to 100,000 people, and numbers over 3.5 million views of all his videos combined, most of which feature him during his everyday life.

Kali made his debut TV series appearance in 2011, when cast to play Team Trainer in the episode “Lingerie Football” of the popular comedy “Mr. Sunshine”, created by Alex Barnow and Marc Firek, and which starred Matthew Perry, Andrea Anders and James Lesure. It follows the life of Ben Donovan, who’s managing the San Diego sports arena The Sunshine Centre; the series aired in 2011 and 2012, and was nominated for a Casting Society of America Award for Outstanding Achievement in Casting, Television Pilot – Comedy.

His most recent TV series role has been his portrayal of Brett in the 2014 episode “Road to Natesville” of the popular family comedy “Raising Hope”, created by Gregory Thomas Garcia, and which starred Lucas Neff, Martha Plimpton and Garret Dillahunt. It follows Jimmy who’s raising his daughter on his own, now that the baby’s mother’s ended up on Death Row; the series aired from 2010 to 2014 and won five of the 28 awards for which it was nominated, including three Primetime Emmy nominations.

A couple of Kali’s following roles were in the comedy “Internal Behaviors Part 2: The Regurgitation”, the short science fiction “Savior”, and the drama “Applebaum”, all in 2012.

The year 2013 saw him play Bouncer in the comedy “White T”, written and directed by Lance Frank, and which starred Jamal and Jerod Mixon and Eric Roberts; it follows twin brothers Henry and Herbert who are dreaming of becoming the most popular rappers in the world.

Some of Kali’s most recent film roles have been in the 2017 sports thriller “Anabolic Life”, the 2019 short comedy “Happy #FlexFriday Everyone”, and the 2020 action comedy “Bullet Ride”.

He produced and composed music for his own 2015 music video “Kali Muscle: Get Big”.

Kali could’ve been seen competing in a couple of game-shows, such as “1 vs. 100”, “Fear Factor” and “Who’s Still Standing”; he also made a guest appearance in the 2016 episode “Will Jail Tame My Wild Teen Daughter?” of the talk-show “Maury”.

He’s been featured in numerous commercials, for companies such as Honda, Comcast and Taco Bell.

Kali met American R&B singer Dvyne Beverley sometime in the 2000s, when she was steadily making a name for herself in the music industry. The two married in a private ceremony, and while neither has shared the exact date of the wedding, it’s believed that they exchanged vows in either 2007 or 2008.

In 2016, Kali filed for divorce; neither he nor Dvyne have spoken of what had led to this, while it’s widely believed that Kali fell in love with fitness coach Helena Vlad, whom he met at a fitness expo. Dvyne stalled the divorce process for as long as possible, so it’s believed that her and Kali’s divorce wasn’t finalized until 2020.

As of September 2022, Kali’s in a long-term relationship with Helena Vlad and has twins with her, while he was previously married to Dvyne Beverley.

Kali’s often ‘accused’ of using steroids, however, he’s explained that he’s entirely natural, and that when you are in jail, you have little else to do but to work out.

He enjoys running his Instagram account, which is today followed by more than a million people and numbers over 40 pictures and videos uploaded onto it; he often answers his fans messages, which are related to working out and dieting.

Kali’s into travelling and has been all around the US, mostly to talk to at-risk youth and advise them on alternatives to spending time on the street.

Kali suffered a heart attack in November 2021, after his left main coronary artery suffered a 100 percentage blockage; he underwent surgery, and was discharged from the hospital on the following day.

Kali’s net worth’s been estimated at more than $3 million, as of September 2022.