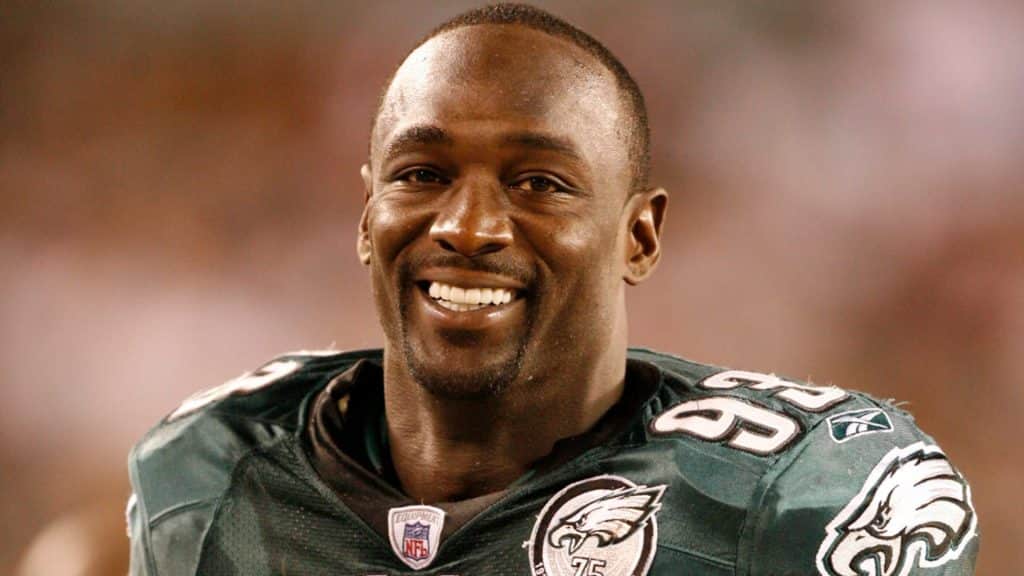 Who is Jevon Kearse?

American former professional Football Player Jevon Kearse – aka ‘The Freak’ – was born in Fort Myers, Florida USA, on 3 September 1976 under the zodiac sign of Virgo. He played in the National Football League (NFL) for 11 seasons, and is probably best known for the seven years which he spent playing for the Tennessee Titans.

Jevon and his bothers Jermaine Green and Joseph Jr. were raised in Fort Myers by their mother Lessie Mae Kearse – their father Joseph Kearse was murdered not long after Jevon’s birth, while they also lost their grandfather and several cousins because they were criminals. Jevon’s younger brother Jermaine was murdered in 1998.

Jevon and his brothers grew up in a rough neighborhood, and Jevon was involved in criminal activities during his teenage years; he was imprisoned on multiple occasions on robbery charges. The family was very poor, and things changed for the better after Jevon’s mother remarried.

Jevon began playing football while attending North Fort Myers High School. What started as a way to keep himself off the street turned into love for Jevon, and he attracted a lot of attention during those four years that he played for the North Fort Myers Red Knights; Jevon was 6ft (1.83m) as a teenager, and even after adding muscle remained fast and agile.

During his final year at North Fort Myers, the American daily newspaper “USA Today” honored Jevon as a prep All-American.

Jevon matriculated in 1995, and was at that point 6ft 4ins (1.93m) tall and weighed around 215lbs (96kgs). He enrolled at University of Florida on an athletic scholarship, and played for their Florida Gators football team under former American Football Player, coach Stephen Orr Spurrier.

Jevon was red-shirted for his first season, and he watched the Gators face the Nebraska Cornhuskers in the 1995 National Championship Game, which they lost 62-24; it was their only loss that year. In 1997, Jevon helped the Gators defeat the Florida State Seminoles in the Sugar Bowl, thus winning the national title; he was named an All-Southeastern Conference (SEC) Freshman in 1997.

Jevon was selected by the Tennessee Titans in the first round of the 1999 NFL Draft, as the 16th overall pick, and signed a $6 million worth contract with them on 28 July 1999.

Jevon helped the Titans win the first game that he played with them, when they defeated the Cincinnati Bengals 36-35; they then won four of their five following games, and Jevon was named NFL Defensive Rookie of the Month for his very first month in the NFL, and named again for every month of his first year in the NFL, except for one. The Titans went on to play the Super Bowl XXXIV, losing to the St. Louis Rams, and Jevon was named NFL Defensive Player of the Year.

He fractured his fifth metatarsal in 2002, and in the following year sprained his ankle, missing many games in both years; Jevon and the Titans failed to reach an agreement when his contract expired, so he subsequently signed an eight-year contract with the Philadelphia Eagles in 2004, worth $65 million.

Jevon and the Eagles reached Super Bowl XXXIX in 2004, losing to the New England Patriots. Jevon suffered a knee injury in 2006, playing only two games during the entire season; he lost his starting position to Juqua Thomas in the following year, and was on 28 February 2008 released by the Eagles.

Jevon expressed his desire to return to the Titans, and signed a two-year contract worth $6 million with them on 6 March 2008. He started all of the 16 games which the Titans played in 2008, but coach Jeff Fisher benched Jevon for the 2009 season, and he thus chose to retire from professional football.

Legend of the Week: Jevon Kearse

Jevon Kearse reminisces about his time in Philadelphia in the latest Microsoft Legend of the Week interview.#FlyEaglesFly

Jevon’s been living in Moorestown, New Jersey since his retirement, and today prefers to stay away from media. He can often be seen working out at a local gym, and could have been heard giving speeches about football and education at several colleges around the US.

Talking about his love life, Jevon was perhaps one of the most secretive NFL players, and didn’t talk about any women whom he might had dated; he’s even today keeping his love life away from media, and it remains unknown if he’s perhaps married, or in a long-term relationship, or even gay.

A website reported in 2015 that Jevon was a gold digger, and that he found a ‘sugar mamma’ after he had filed for bankruptcy that year; it was reported that he dated married Mrs. Florida International, and that she ‘forgot’ about her three children so that she could be with him. Though rumors quickly spread around the internet, no evidence was provided to support these claims.

There are many who believe that Jevon’s gay, and that he’s not willing to share this with his fans, but this hasn’t been confirmed either.

Jevon seems to be unattached as of October 2022, hasn’t married and doesn’t have children.

Jevon’s posted nearly 300 pictures and videos onto his Instagram account, and there are currently over 22,000 people following him on the social media network.

He’s still today physically highly active, as he works out at the gym nearly every day, and also plays a variety of sports with his peers; Jevon enjoys bowling, and has become an avid golfer.

He likes to shoot weapons, and goes to a gun range close to his home at least twice a week.

He likes to watch movies starring Denzel Washington and Morgan Freeman – some of his favorites are “Se7en”, “Going in Style” and “The Shawshank Redemption”.