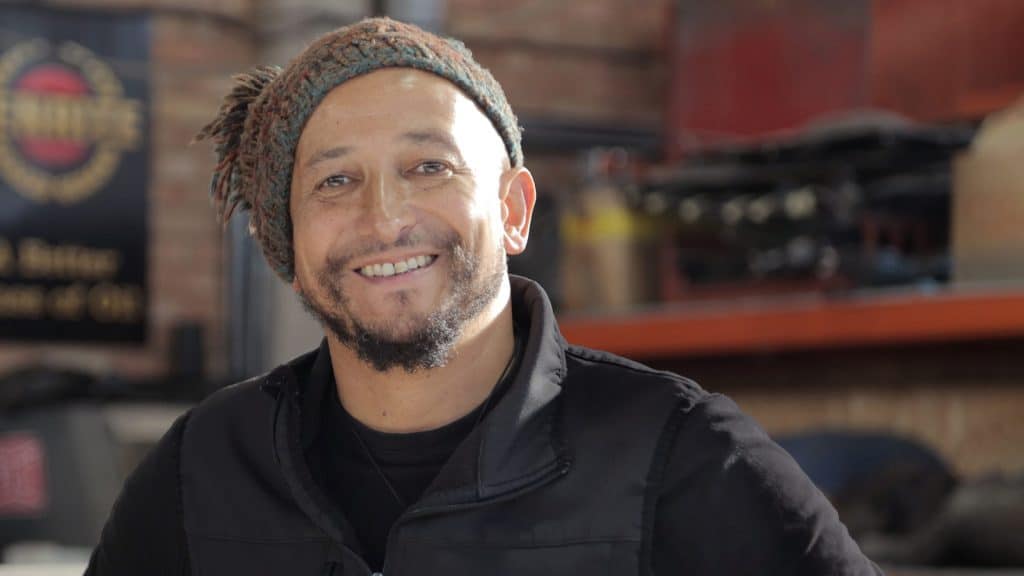 What happened to Fuzz Townshend on Car S.O.S?

Who is Fuzz Townshend?

Nicknamed Fuzz thanks to his unique afro, the musician’s life changed forever at the age of ten. When his mother participated in a national newspaper competition and won a brand-new Vauxhall Chevette, she chose to accept the prize in cash, and bought a drum kit for her son. Fuzz would make his stage debut two years later, having studied with the local jazz musician Al Reed. Before the 1970s were over, Fuzz was already playing with college bands in local clubs.

Upon completing his secondary school education, Fuzz began an apprenticeship with the West Midlands Passenger Transport Executive, a local bus company. While working on buses at the company’s Dudley branch, he released his first charting single, and recorded two live sessions for BBC Radio 1. Soon, he would join forces with Ranking Roger and General Public.

After being noticed by Pop Will Eat Itself, a local indie pop band, Fuzz seemingly left General Public and joined the group; a successful North American tour with Nine Inch Nails and charting entries in the UK singles and album charts would ensue. He also drummed for Bentley Rhythm Ace.

A year after “Hello Darlin’”, Fuzz’s first solo release which peaked at number 51 on the UK charts, he signed a deal with Echo Records. With funding from the label, the future TV star’s first solo album, “Far In”, was born. It was released in the UK in 1999, and the US two years later under Sabrina Silverberg’s Stinky Records label.

Fuzz’s self-titled second album was released in 2002, then two years later, he put his solo career on standby, and turned to lecturing in music technology and music practice. Around the same time, his old band PWEI reformed, and other groups Fuzz has drummed for include The Beat and The Wonder Stuff.

After a few years as a college lecturer, Fuzz began working for Practical Classics, and would climb up the ranks to snag the lucrative position of Technical Editor. In 2011, his career underwent a radical change as he went freelance, and started his classic car restoration business. Three years later, he founded a garage network aimed towards classic cars, named Classic Friendly Ltd. Some of the services he offered included safety inspections for classic cars exempt from Ministry of Transport (MoT) tests, and standardized servicing regimes.

Although online sources claim that Fuzz has plans of expanding his services for auction and online auction vehicles, Classic Friendly Ltd confirmed in spring 2019 that the musician had left the business, and had “no further dealings or influence with its direction or trading”. Three years prior to the Facebook announcement, Fuzz left his first business, Westgate Classics, and founded a new garage named To-Ta Classics Ltd., since 2018 known as SOS Workshop Ltd..

These days, Fuzz’s work features regularly in Classic Car Weekly and Practical Classics. He lives in Shropshire and is an advocate for classic car safety campaigns such as Classic Aware. As for his private life, he’s been with his wife Cressida for almost a decade, and they have two children – Atticus born in June 2019, and Pixie born sometime in 2020. Cressida has no public social media profiles.

Fuzz also shares an elder daughter named Honor Doro Townshend with his first wife, about whom little is known, as the presenter has never been one to give personal interviews. Honor herself is thought to work as a freelance private chef, with over 1,000 Instagram followers, whose services include bespoke menus, cooking lessons, and more. Instead of glossy vacation snaps and glamorous filtered selfies, Honor prefers to share her passion for cooking with her followers, and has posted hundreds of plates over the years.

Having made something of a name for himself in the automobile industry, Fuzz was invited by TV producers to a screen test audition for “Car S.O.S”, a National Geographic Channel series which also airs on More4 and Channel 4 in the UK, and won “Most Inspirational Show” at the 2018 National Reality TV Awards.

If ur a fan of classic cars being redone, & some good will check it out. They surprise car owners who r unable to rebuild their cars. I think my favorite part is seeing the joy on the faces of the surprised car owners. #CarsSOS #Disney+ #NationalGeographic #HeartWarming pic.twitter.com/4Led7epI6t

“Car S.O.S” premiered in 2013, and has two presenters: Tim Shaw and Fuzz. With help from a specialist car restoration team, the duo restores privately-owned classic cars in Europe and the UK for owners who can’t do it themselves for financial or medical reasons. Relatives or friends of the owners nominate them without their knowledge; later, the presenters show them their finished car.

The show’s format changed for a special episode in series three, in which the team restored a 1962 Austin-Healey Sebring Sprite with the owner’s knowledge. The important vehicle, which had been driven by Sir Stirling Moss, Steve McQueen, and other famous racers, went to the British Motor Museum (formerly known as the Heritage Motor Centre) after its restoration. Adding to the car’s rarity is the fact that the only other Sebring Sprite in the world was destroyed in a race.

Apart from that special episode, the format has never changed: Tim and Fuzz pick up and review the featured vehicle, and while the former talks to the nominee’s relatives, Fuzz inspects the car and calculates how much work is needed. Then the car is taken via trailer to Fuzz’s workshop – where most of the filming takes place – and the restoration team arrives to do a thorough inspection.

Once accepted for restoration, Tim has to find the necessary parts by travelling the country. Occasionally, the presenters take a break from restoring the car to visit restored models of the same vehicle, test drive them, and chat with their owners. The restoration team continues the work while the presenters are occupied.

When the restoration process is nearing its end, Tim and the nominee’s family carefully stage a comedic fake event to return the car to its owner. Typically, Tim will disguise himself before presenting the owner with their restored vehicle.

Fans have often wondered how long it actually takes to restore these beautiful classic vehicles. Tim and Fuzz must meet strict headlines, and restore 10 cars every 6 months, so an average of 18 days per car. It’s been said that they will often spend over 1000 man-hours on each vehicle, despite aiming to spend between 500 and 1000.

Each season usually takes two months to air, with the exception being season eight, which aired between March 2020 and March 2021 – as of March 2022, 10 seasons with 10 episodes each have aired. Some of the most impressive projects Tim and Fuzz have worked on include an Aston Martin DB6, a 1984 Audi Quattro, a Volvo P1800, and a 196 Mercedes-Benz 230SL Pagoda to name a few. Fuzz’s favorite project car is an AC Aceca, that featured in season 4 and was manufactured shortly after WWII, while Tim’s is a Porsche 356 that was seen in season eight.

Born in June 1974 in England, Tim Shaw is a humorous TV presenter, radio host, and engineer with a career spanning decades. Not much is known about his home life, but fans of his work are aware that the British Dyslexia Association certified the TV personality as a creative genius, when he was aged just 12.

A hard worker who thinks outside the box, Tim had designed rubberized ice cube trays, a folding walking aid, fast-flashing brake lights, and a plethora of other inventions by the age of 16. Thanks to a scholarship, he was able to study Product Design and Mechanical Engineering at Oxford University, so it’s perhaps unsurprising that he was named a Young Engineer of the Year in 1992 and 1994. Later on, he earned a Professional Broadcasting degree.

At the age of 30, Tim landed his first broadcasting job at Kerrang! Radio. He and the rest of his team – Duncan North, Lucy Helliwell and Greg Pebble to name a few – worked from Sundays to Thursdays on a 10:00pm to 1:00am schedule, until their show, “The Asylum”, ended in September 2007.

One of the most controversial moments in Tim’s radio career came in 2005, when he and Greg pretended to burgle the home of Andrew Jeffries – who, at the time, was Kerrang Radio’s station director – live on air. The station promptly decided to suspend Tim after he smashed a window and sprayed rooms of his boss’s luxurious Sutton Coldfield property with inappropriate graffiti.

Tim Shaw from Car sos showing off his Lotus. Which is now available on a graphic kit.

Days before “The Asylum” was cancelled, Kerrang! Radio gave Tim a new job in the breakfast slot. His 7:00am to 10:00am schedule from Monday to Friday was much more stable, whereas his co-host Kate Lawler was a far cry from the colorful colleagues he’d worked with for three years – but sadly, Tim couldn’t stay out of trouble for long.

Kerrang! Radio fired the host, who had also been investigated for pretending to rescue a suicidal listener, in April 2008 after a separate Ofcom investigation involving an on-air competition was launched. Instead of playing by the rules, Tim had intended on giving the prize – two tickets to see a Rolling Stones documentary – to his friend, by pre-recording his entry and playing it on the show as if it were live.

Months later, Tim had bounced back and was working for Absolute Radio. The new show, “Absolution”, had a similar format and schedule as “The Asylum”, and premiered in October 2008. The change of station paid off for Tim, as in 2009 he won the Sony Award for Best Entertainment Show, alongside his colleagues Eloise Carr and Roque Segade-Vieito.

Other shows Tim has presented include “Networked” and “Tim Shawn’s Rehab”, and he’s worked for BRMB, Orion Media, and Bauer Radio. One of his most famous interviews was with Kitty Hart-Moxon, a Holocaust and Auschwitz survivor, which lasted almost seven hours instead of the intended 90 minutes. Instead of cutting the interview short, Tim kept going, and received positive feedback from the audience for his work.

Tim’s flirtatious nature has landed him in trouble a couple of times, especially when his wife sold his $25,000 Lotus Esprit on eBay for a mere 50p, after he jokingly told Jodie Marsh live on air that he’d leave his family, including his two children, for her. The car, which was snapped up just five minutes after being placed on the auction site, came with the description: “I need to get rid of this car in the next two to three hours before my husband gets home to find it gone and all his belongings in the street.” Since then, Tim has unsurprisingly refrained from joking with female colleagues.

Some TV shows Tim has worked for apart from “Car S.O.S” include “Street Genius”, formerly named “None of the Above”. The science show, which airs in 140 countries and is filmed in the US, sees Tim asking viewers multiple choice questions related to experiments that he conducts on the street. If the question is answered correctly, Tim will then explain the ins and outs of the experiment.

“True Tube” is one of Tim’s original concepts, which he concocted with the production company Nerd TV. The show originally aired on Sky1 until National Geographic purchased it in 2014. Tim and his co-host Buddy Munro recreate viral YouTube stunts, and explain the engineering involved, making the show wildly popular amongst a younger audience.

Other hosting and presenting gigs include a short stint on “Fifth Gear”, and a body positivity Channel 4 program named “Extreme Male Beauty”. The second show discussed the unspoken beauty standards that negatively impact men, but are rarely spoken about – such as extreme exercise routines, plastic surgery, and impossible diets.

Regardless of controversial incidents, Tim is still clearly in great demand!