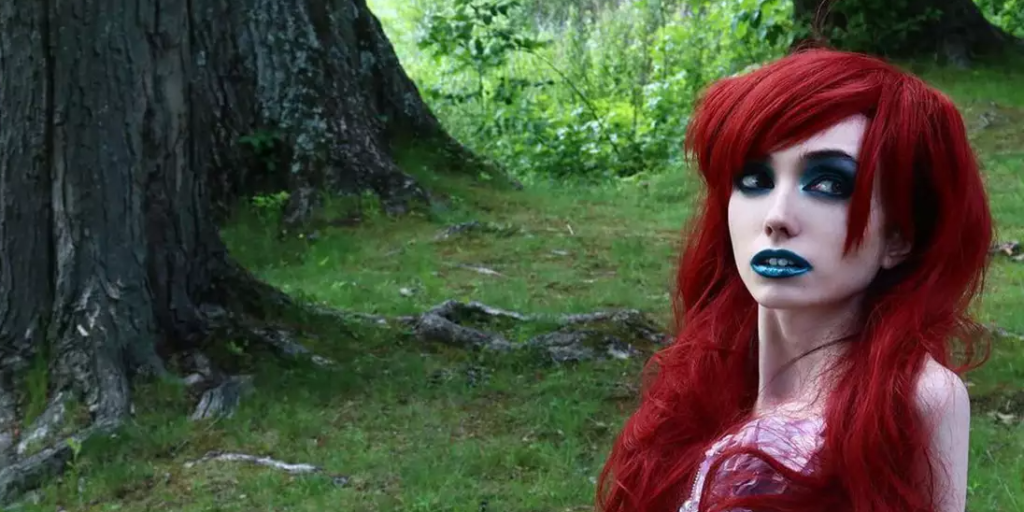 Who is Eugenia Cooney?

Eugenia Sullivan Cooney was born in Boston, Massachusetts USA, on 27 July 1994 – her zodiac sign is Leo, and she holds American nationality. She’s a YouTuber and social media star, while she’s probably known best for her self-titled YouTube channel, which she launched on 18 June 2011; it’s today subscribed to by more than two million people, and numbers over 250 million views of all her videos combined. Eugenia was actually born as Colleen Cooney, but her name was changed around a month after her birth.

Eugenia was raised in Boston alongside her brother Chip Cooney, by their parents, about whom not a lot is known became she respects their privacy; it’s said that their father is a businessman, and their mother a housewife.

Eugenia found her own goth and emo look at quite an early age, and had problems at high school because she was bullied; she transferred to Connections Academy after only a year, and matriculated in 2013. She was interested in a couple of activities during her school time, including dancing and acting with the school’s drama club. Upon matriculating, Eugenia chose not to pursue a college degree, but to try and become a model; she did manage to sign a contract with a modelling agency from New York State, however, after they requested that she deleted her social media accounts, Eugenia quit modelling and focused on her career on the internet.

Most of her YouTube videos feature her during her everyday life, while she also enjoys showing her fans various clothes, giving them beauty tips, and showing off her cosplay costumes. We’re going to mention three of Eugenia’s most popular videos, which have helped her attract many subscribers. #1 video “My Mom Turns Me PREPPY” has been viewed close to 25 million times since 9 February 2016, and features Eugenia’s mother turning her into a preppy, while Eugenia had previously turned her mother into an emo. Her second most popular video “MY FAVORITE SUMMER TOPS” has been watched close to 10 million times since 22 June 2015, depicting Eugenia showing off some tops which she enjoys wearing during summer.

Her #3 video “I’m Back” has been viewed over eight million times since 20 July 2019, and features Eugenia explaining to her fans why she had been away for a while.

She’s somewhat new to TikTok, and is thus followed by only close to 3,000 people on the network, but has gathered over 5,000 likes of all her videos combined. Eugenia’s also a Twitch streamer, having launched her self-titled channel on 26 March 2014. It’s today followed by over 400,000 people, making her the owner of the #2,942 most followed English channel. She has spent a total of close to 3,000 hours (125 days) livestreaming, and usually has around 400 viewers per stream – Eugenia’s highest recorded number of concurrent viewers was 5,854 on 22 July 2019. She has spent the majority of her streaming time just chatting with her fans (1,400 hours), while some of the games which she’s played include “Genshin Impact”, “Animal Crossing” and “League of Legends”.

Does she have an eating disorder?

Since she began uploading videos onto her YouTube channel, people on the internet have assumed that she’s struggling with the eating disorder anorexia nervosa; Eugenia denied these rumors, while many people accused her of encouraging eating disorders. In January 2019, after she had taken a break from uploading videos and posting onto her social media accounts, rumors began circulating the internet that she had perhaps died. On 28 January of the same year, Eugenia was featured in the video “The Return of Eugenia Cooney” of the American YouTuber Shane Dawson, in which she revealed that she was indeed diagnosed with anorexia nervosa, and that she had entered a treatment program.

Eugenia was nominated for a 2020 Shorty Award for YouTuber of the Year.

Eugenia prefers to keep the details of her love life away from the media’s attention, and hasn’t mentioned any boys (or girls) whom she has perhaps been with, but has joked about Jack Skellington from the animated stop-motion fantasy movie “The Nightmare Before Christmas” being her boyfriend. There are today various rumors circulating the internet, concerning both Eugenia’s sexual orientation, and past and present relationships. Some of her fans believe that she’s lesbian, claiming this to be the reason behind her being too secretive about her love life; a fan has even claimed to have spotted Eugenia spending time with her girlfriend, but no evidence has been provided to support these claims, nor has Eugenia addressed these rumors.

There are also those who believe that she’s today in a relationship with a non-celebrity American boy, and that she prefers to keep him away from media, but this hasn’t been confirmed either. As of June 2022, Eugenia seems to be single, hasn’t married and doesn’t have children.

Eugenia enjoys spending her spare time in nature, and many of her Instagram pictures feature her in parks, close to rivers and lakes, and deep in the woods. Summer is her favorite season, as she enjoys sun tanning at the beach. Her favorite color is black – she mostly wears black and white clothes. Eugenia’s a huge lover of dogs, with pugs being her favorites.

She’s a fan of animated movies, with a couple of her favorite being “The Nightmare Before Christmas”, “How To Train Your Dragon” and “Megamind”. Eugenia also enjoys watching live-action films – her favorite actor and actress are Matt Damon and Angelina Jolie, while some of her favorite movies include “Saving Private Ryan”, “Good Will Hunting” and “The Tourist”.