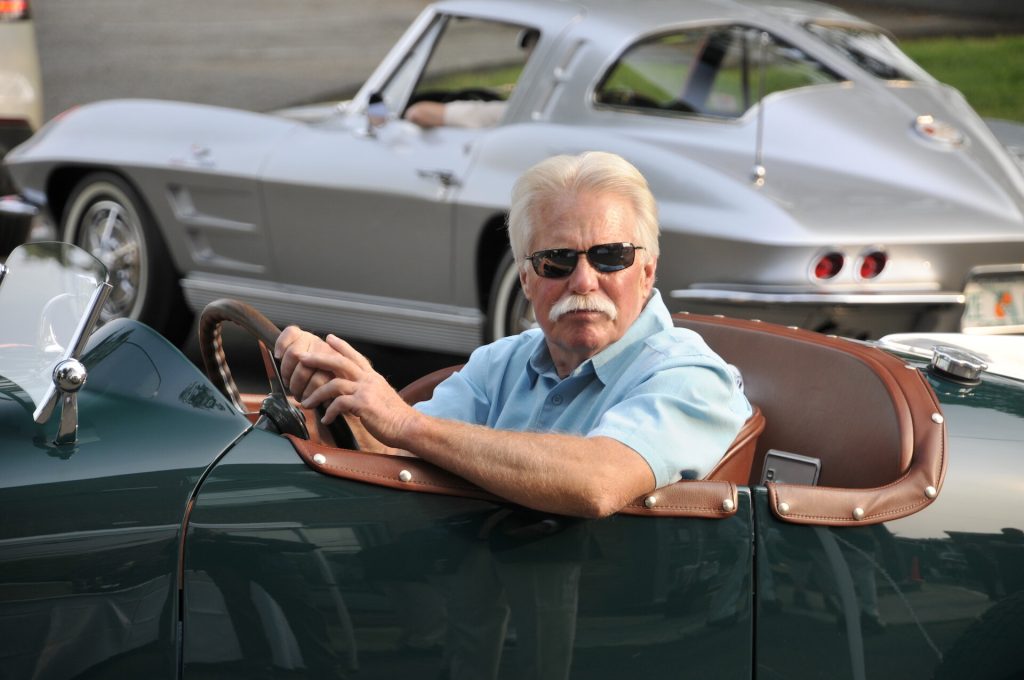 Who is Wayne Carini?

Despite being a TV personality and the driving force behind “Chasing Classic Cars”, Wayne Carini remains somewhat of an enigma to the general public. The car restorer was born in Portland, Connecticut, USA, in 1951 to Robert “Bob” Carini, the owner of a collision repair and auto restoration business. With time, Wayne went on to inherit half of the family business as a gift.

The media star’s professional career started in his father’s shop. Still in grade school, Wayne would work on classic vehicles with his father, including Packards, Ford Model As, Lincolns, and Duesenbergs.

Before hosting the car program, Wayne studied at Central Connecticut State University in New Britain to become an art teacher. However, upon graduating he discovered that jobs for art teachers were few and far between, and so began studying Ferrari restoration, with Francois Sicard as his mentor.

Thanks to his talent and love for autos, Wayne previously served as a grand marshal at Connecticut’s Klinberg Vintage Motorcar Festival; other TV shows that he’s appeared in to date include “Overhaulin’” and “My Classic Car”. Jim Astrausky, the chief of Essex Television Group Inc., noticed Wayne and offered him the chance to host and star in his own show for Motor Trend channel – thus birthing “Chasing Classic Cars”.

As for Wayne’s father Bob, who passed away in 2016 of old age, he was the co-founder of the Model A restorers club car of America, and received the Antique Automobile Club of America lifetime achievement award. Known for his auto work and being a collector and restorer of Honda motorcycles, he definitely passed his love for cars down onto his son.

A popular documentary series produced by Clint Stinchcomb, “Chasing Classic Cars” focuses on finding vehicles from all eras, and getting them up and running again. The series shows the restoration and auction process for each car, including some which haven’t been seen in public for decades, and is refreshingly realistic in that not every project turns a profit.

Numerous car shows have aired over the years, but not many can boast the success of Wayne’s program, which has over 17 seasons to date. From its premiere in 2008, Wayne’s no-nonsense attitude and expertise appealed hugely to audiences, as well as his knack for imparting intricate auto knowledge in layman’s terms. It’s evident that classic cars are Wayne’s true passion in life, which makes for much more enjoyable viewing.

At just nine years old, a young Wayne was inspired to hunt for classic cars after going for his first ride in a 1960 Ferrari 250 SWB – one of the very same cars he’s now been chasing his entire life. Although such an addition would be the holy grail of his collection, the host doesn’t believe he’ll snag the elusive vehicle due to its exorbitant price. “I’ve restored seven of them for clients over the years, but the steel body is $5 million, and an alloy body is $10 million,” he previously explained in an interview.

Some rare finds on the show include the 1964 Shelby Cobra USRRC Roadster and the 1952 Muntz Jet, but Wayne doesn’t always auction the cars he restores while filming. His personal collection currently stands at an estimated 25 vehicles, with the oldest thought to be a 1936 Ford pickup. Shockingly, he also spent over three decades saving money and searching for another of his dream vehicles: the Hudson Italia. This search was actually what got Wayne noticed by Jim Astrausky, who sadly passed away in 2017 after being involved in the show for almost a decade. When a New York Times journalist heard Wayne’s story, he published an article about it entitled “Your First Love, and Your Last Love”, which reached Jim’s desk.

Wayne said in an interview with ERN Live that the show was originally a documentary, which he didn’t receive any financial compensation for, but given its success, things have probably changed since then. Another key to the show’s popularity is Roger Barr, who also features in the show, and is responsible for most of the restoration work. Roger was the owner of the local foreign car repair shop in their hometown, met Wayne when the latter was just 10 years old and has been Wayne’s most loyal sidekick during his journey,

“If Dad was fixing an imported car that needed mechanical work, he’d take it to Roger, and if a car at Roger’s shop needed body repairs, it would always end up at Dad’s,” Wayne has previously explained.

Roger’s mysterious disappearance from the series in its thirteenth season left viewers puzzled and upset, especially when rumors of his death began circulating online. Fortunately, we can report that Roger remains in good health.

The automotive expert was born in Staten Island in 1936, and became interested in engineering at a young age. His dreams of becoming an aviation engineer led to him joining the US Air Force after matriculating from high school, and the future TV personality was stationed in Germany, where he worked as a mechanic and earned his Aviation Engineering license.

Roger was also introduced to motorsport racing while in Germany, which would eventually become another of his passions, serving as a back-up driver for teams if their top racer forfeited for technical or medical issues.

When Roger had completed his service with the Air Force, he returned to the US and began working in various workshops, eventually opening his own. The Foreign Car Shop, in Connecticut. In addition to running his workshop, Roger taught engineering at Brown College and the University of Hartford, passing down decades of valuable knowledge.

Some races Roger participated in in the 1960s and beyond include the Formula-V and Formula-A Continental Championships; before retiring from the circuit, the multi-talented engineer won a couple of championships himself.

In 2008, Roger was approached by Wayne with the offer to appear on “Chasing Classic Cars”, which he readily accepted. Although Roger and Wayne’s father didn’t have a close friendship, they helped each other out plenty of times when it came to autos, which is why Wayne considered Roger the best person for the job.

Despite proving himself to be more than capable of handling the show’s busy filming schedule, Roger was forced to take a break in 2017 following knee injury. The engineer informed his fans via social media that he would be undergoing surgery on his injured knee, and also alluded to having another illness that he preferred to keep unidentified.

Roger returned to the show after recovering from said surgery, but was sadly forced to drop out after being hospitalized for a second time following an accident at Wayne’s workshop. Luckily, his family kept the TV personality’s followers informed through his Facebook group, sharing all the information they could, later announcing that the affable racecar driver had made a remarkable recovery.

Despite the engineer allegedly being a millionaire, his best friend took to GoFundMe to pay for Roger’s medical bills following his second hospitalization. “Roger Barr is a semi-retired mechanic working and trying to keep afloat; he doesn’t benefit from the sales of million-dollar exotics nor has any income from the TV series,” the friend wrote. Luckily, Roger’s fans rallied around, and raised $20,000 for his hospital bills.

In November 2021, the admin of Roger’s Facebook group posted: “Staying home was boring, so Roger went back to work today. Let’s see what tomorrow brings.” Roger, also nicknamed “the Curmudgeon”, is currently residing in New England with his wife Sally, and working at Paddock Classic Cars, although these days he’s more of a mentor to the guys at the workshop, and doesn’t get his hands too dirty.

From Ferraris to Lombardos to Alfa Romeos, no job is too challenging for the talented crew at The Paddock. The restoration shop is also active on YouTube, with a channel boasting thousands of subscribers, and plenty of entertaining videos in which Roger regularly appears.

When not filming for his show, Wayne keeps himself busy with his businesses and charity work. F40 Motorsports, his dealership and workshop for classic vehicles, has received plenty of exposure over the years from “Chasing Classic Cars”, and is the car restorer’s best-known professional venture. Some other businesses he owns and operates are Carini Carozzeria and Continental Auto Ltd.

According to the F40 website, Wayne avidly supports autism research organizations, helping to organize and sponsor car events to raise funds for the noble cause. As his youngest daughter, Kimberly, was diagnosed with autism at a young age, Wayne is especially keen on a cure or treatment for the condition being found.

Wayne and his wife Laurie have been married for over twenty years, and share two daughters, with the eldest being Lindsay. Not much is known about them, but Lindsay seems keen to follow in her dad’s footsteps, and has previously been the Grand Marshall of the Vintage Motorcar Festival.

Despite his newfound fame, Wayne lives in the log cabin that he built for his family decades ago, and doesn’t seem interested in a flashy lifestyle. In fact, the pandemic slowed him down considerably, as prior to travel restrictions, the media personality was always catching flights and searching for classic vehicles far from home.

Wayne’s smooth transition into the social media era has made him more popular than his contemporaries, as he can often be found interacting with his younger fans, keeping them up to date with the show’s comings and goings. The car restorer has thousands of Instagram followers with whom he loves to share his rare finds, and sneak peeks into his life.

Hope everyone is staying healthy and safe, enjoy this short video!

With that said, Wayne hasn’t been active on Instagram since October 2021, with his last post detailing a classic car he found in Indiana. In the same month, the team at Crashing Wave Entertainment dedicated a heartfelt birthday message to him, so it’s more than likely that Wayne will be online again when it’s time to promote the latest season of “Chasing Classic Cars”.

It’s long been rumored that filming for “Chasing Classic Cars” was put on halt due to Wayne’s financial and legal woes. In June 2020, William Robert Richmond filed a lawsuit against F-40 Restoration, Wayne’s business, involving a claim for replevin of a 1934 Pierce Arrow coupe.

Kari Dooley, the US District Judge assigned to the case, said: “This case represents one of those rare but unfortunate cases where although all parties ostensibly acted in good faith, one is doomed to incur the losses occasioned by a bad actor, who is himself not a party to the litigation.”

Although Wayne kept quiet about the lawsuit, it soon became a hot topic amongst netizens and viewers of the show. It also became known that, much like popular reality TV series across all genres, “Chasing Classic Cars” isn’t 100% truthful, despite being initially marketed as a documentary.

One example is the hidden charges when purchasing vintage vehicles. Although the show would have you think that Wayne buys his dream classic cars at a more or less reasonable price, the hidden charges tell a different story. Viewers are rarely told how often the car owners were paid either, and scripted scenes are occasionally used to keep things interesting.

With that said, Wayne is known to be an honest businessman, and has confessed that not every car makes him a profit after its restoration. In fact, some cars on the show never find an interested buyer, although it’s not sure what happens to them when filming wraps up.

As for Wayne’s alleged money issues, there are plenty of salacious YouTube videos floating around online, which claim that the car restorer is in the red and struggling to stay afloat. However, it’s important to note that no evidence of said money issues has ever been found. In an interview, he said that his only wish is for his two daughters to be financially stable when he’s gone; viewers certainly hope that that is the case, but not yet!