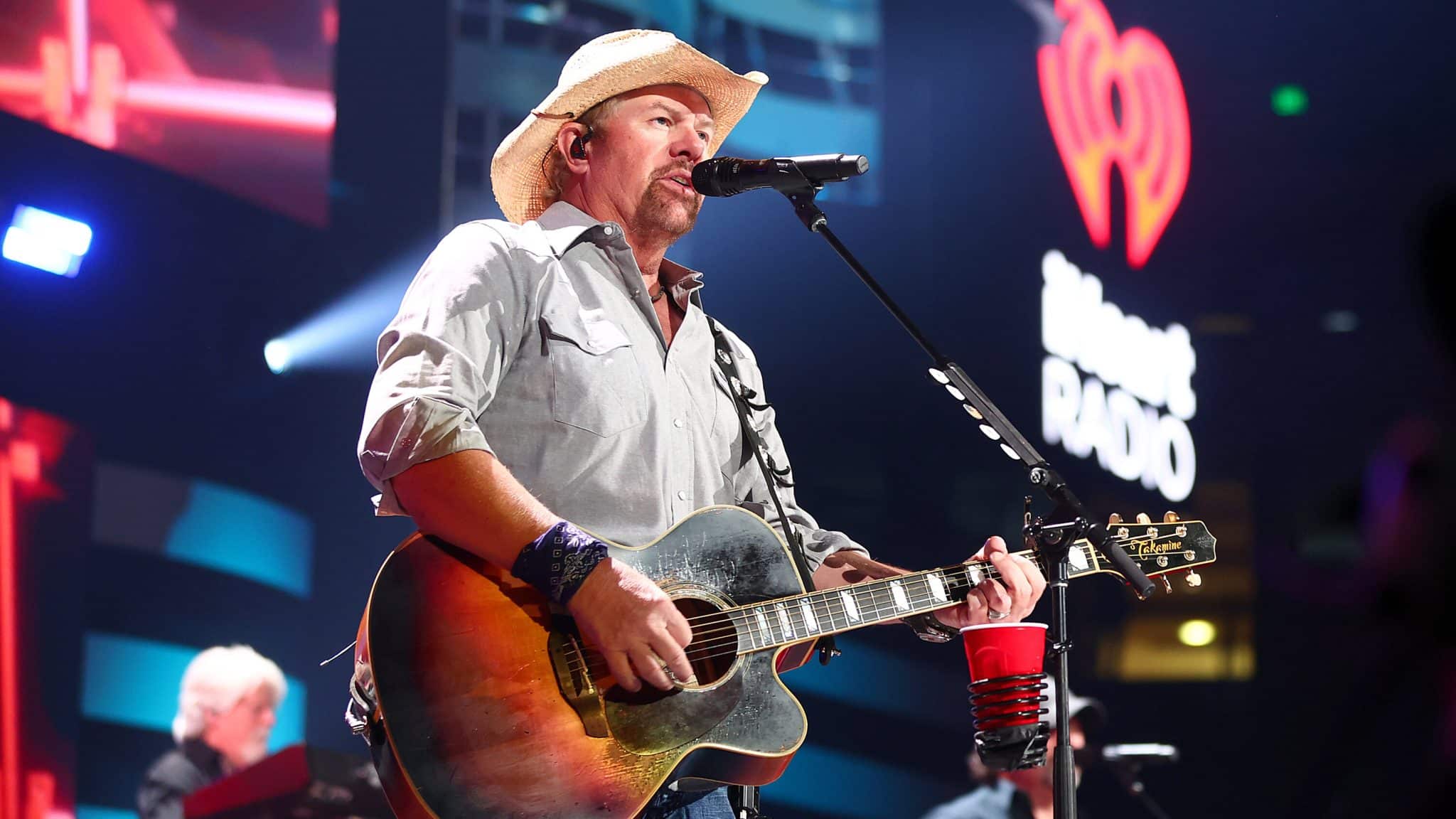 Who is Toby Keith?

Born in July 1961, Toby Keith Covel is an American singer-songwriter, record producer, and actor, who was signed to Mercury Records until 1998. Known mainly for his debut single “Should’ve Been a Cowboy”, which topped the country charts upon its release and became the most-played country song of its decade, many consider that Toby’s prime years were the 1990s.

Toby was born in Clinton, Oklahoma, and brought up alongside his brother and sister by parents Carolyn Joan and Hubert. When the country singer was still in grade school, the family spent a few years in Fort Smith, Arkansas, before relocating to a suburb of Oklahoma City named Moore, which would soon become home for the family unit.

Before the move to Moore, Toby would often spend summers in Fort Smith with his grandmother, the owner of local nightspot Billie Garner’s Supper Club. Thanks to this close bond, Toby worked small jobs in the supper club, and became interested in the music scene, and even began playing with the local bands some evenings, having been given his first guitar at eight years of age.

When the Keith family moved to Moore, Toby studied at Highland West Junior High and Moore High School, playing on the football team as a defensive end. Upon matriculating, the future country star began working in the oil fields as a derrick hand, steadily climbing up the ranks and reaching a managerial position thanks to his drive and tenacity.

However, Toby’s true passion was still music, and at the age of 20 he formed the Easy Money Band with his friends Keith Cory, Danny Smith, Scott Webb and David Vowell. While still working in the oil industry, Toby and the band performed at local bars, with the singer occasionally having to leave halfway through a concert if he had to go to work.

The vertiginous decline of Oklahoma’s oil industry in 1982 led to Toby’s sudden unemployment. Luckily, the musician had his football skills to fall back on, and tried out for the Oklahoma Outlaws, part of the United State Football League, but didn’t make the cut, so played with the Oklahoma City Drillers, a semi-pro team, while continuing to perform with Easy Money Band. Originally.

Toby eventually left the team to focus entirely on music. Despite doubtful family and friends, the Oklahoma native persevered – and his efforts paid off, as in 1984, Easy Money became part of the honky-tonk circuit in their home state and Texas.

After years on the honky-tonk circuit, Toby moved to Nashville, Tennessee in the early ‘90s, and became a busker on Music Row. He also tried to get the city’s record companies interested in Easy Money Band’s demo tape, but sadly had no luck. Defeated and downtrodden, the aspiring star returned to his hometown, and vowed that if he didn’t have a recording contract by the age of 30, he’d give up on his musical aspirations and try another career path.

Little did Toby know that a fan of his, who worked as a flight attendant, would give a Mercury Records executive named Harold Shedd a copy of the band’s demo tape. Liking what he heard, Harold signed Toby with Mercury, after seeing him perform live.

As we mentioned earlier, Toby’s debut single was a roaring success, and even reached the 93rd position on the Billboard Hot 100 – no small feat for a newbie with a meager promotion budget. “Should’ve Been a Cowboy” was the lead single on Toby’s self-titled debut studio album, and had received over three million radio spins by the end of the 90s.

Toby’s debut album, which was certified platinum by the Recording Industry Association of America (RIAA) after selling one million copies, spawned other Top 5 singles on the country charts, such as “Wish I Didn’t Know Now”, “A Little Less Talk and a Lot More Action”, and “He Ain’t Worth Missing”. Enjoying his newfound success, Keith toured with John Brannen and Shania Twain, his labelmates at the time, and also appeared with Shania in a Tracy Lawrence music video.

In September 1994, Toby inked a deal with the Nashville division of Polydor Records and released “Boomtown”, his second album, which was also certified platinum and enjoyed another number-one single with “Who’s That Man”. The album’s other singles, “You Ain’t Much Fun” and “Upstairs Downtown”, both reached the Top 10.

Late 1995 brought with it the release of Toby’s first seasonal album via Mercury. Entitled “Christmas to Christmas”, the project was made up of all-original songs, and had one chart entry with “Santa I’m Right Here”, but didn’t make much noise otherwise.

In 1996, Toby signed with A&M Records Nashville for the April release of his third album, “Blue Moon”. This was also certified platinum, and spawned three singles – “A Woman’s Touch”, “Me Too”, and “Does That Blue Moon Ever Shine on You”, which peaked at numbers one, six, and two respectively. In the same year, the artist collaborated with The Beach Boys on their “Stars and Stripes Vol. 1” album.

A year later, Toby returned to Mercury after a corporate merger, and soon released “Dream Walkin’”, his fourth studio album and the first to be produced by James Stroud, who would be his co-producer over the next few years. Despite no number one, the album had two successful number 2 hits – “I’m So Happy I Can’t Stop Crying” and “We Were in Love”; the former song was performed alongside Sting at the Country Music Association awards in the same year.

October 1998 brought with it the release of “Greatest Hits Volume One”, Toby’s last project with Mercury which included two new songs and twelve prior singles. Of the two new songs, the country-rap fusion “Getcha Some” reached the top 20, while “If a Man Answers” missed out on the Top 40, Toby’s first single to do so.

Originally, the two new songs were intended for a studio album, which dissatisfied Mercury executives sent back to the drawing board before telling Toby to get to work on another project. After recording two more songs which were also rejected by the label, Toby asked to terminate his contract.

The following year, Toby signed to the Nashville division of DreamWorks Records, where his co-producer James served as president. The artist’s first release with DreamWorks was “When Love Fades”, which performed somewhat disappointingly on the charts, and failed once again to make the Top 40. However, the persevering country star asked to withdraw the single and replace it with “How Do You Like Me Now?!”, one of the songs which Mercury previously turned down.

Toby clearly had a good ear for hits, as “How Do You Like Me Now?!” became his first top 40 hit on the pop charts, spent five weeks on the country charts at number one, and peaked at number 31 on the Hot 100. The song was the title single for Toby’s first album with DreamWorks, another platinum project in the Oklahoma native’s career. Other singles from the album include “You Shouldn’t Kiss Me Like This” and “Country Comes To Town”.

Toby won the Top Male Vocalist and Album of the Year categories at the 2001 Academy of Country Music awards, some of the most prestigious accolades for artists in the country music genre. Months later, he released “Pull My Chain”, which came with three number one country chart singles – “My List”, “I’m Just Talkin’ About Tonight”, and “I Wanna Talk About Me”. The third single once again experimented with country-rap, while “My List” was named Single of the Year by the Country Music Association in 2002.

Following the tragic terrorist bombing of 9/11, Toby penned “Courtesy of the Red, White, & Blue (The Angry American)” in just 20 minutes and included the song on his following album, “Unleashed”. Toby’s father, a veteran who’d died months earlier in a car accident, was referenced in the song, which became the first single off “Unleashed”, and reached number one. Other singles included “Beer for My Horses”, “Rock You Baby”, and “Who’s Your Daddy”.

The star’s eighth studio album, “Shock’n Y’all”, was released in late 2003 and became Toby’s second album with all number 1 singles. A year later, the Oklahoman released his second “Greatest Hits” compilation album, with three new songs, one of them being a touching duet with his daughter Krystal, that performed fairly well on the charts.

“Honkytonk University” was Toby’s final release under the DreamWorks label, which ceased operations shortly afterwards. Months later, the hardworking musician founded Show Dog Nashville, his own label through which he released the 2006 album “White Trash with Money”. A lot of changes were going on in Toby’s career at the time as he also stopped co-producing with James Stroud, and replaced him with Lari White.

Later in 2007, Toby released another seasonal album entitled “A Classic Christmas”, followed in May 2008 by another compilation project with 35 prior singles. The artist’s career showed no signs of slowing down, as he enjoyed two number one hits that year – “She Never Cried in Front of Me” and “God Love Her”.

Critics claimed that Toby’s star was beginning to wane with the 2010 release of “Bullets in the Gun”, the Oklahoman’s first album to have no top 10 hits. However, the country artist bounced back a year later with his following album “Clancy’s Tavern”, which included a number one country single and “Red Solo Cup”, which peaked at number 15 on the Hot 100 and became his most successful crossover.

Over the next few years, Toby’s following projects would be “Hope on the Rocks”, “Drinks After Work”, “35 MPH Town”, and the compilation offering “The Bus Songs”. All performed moderately well on the charts, but the absence of more albums after the last-mentioned left fans wondering what had made the country powerhouse put an hiatus on his lengthy and fruitful music career.

The Truth About Toby

In the last few years, plenty of music bloggers have suffered deep dives with Toby, following his trajectory in the music industry, and trying to pinpoint exactly where things went wrong. It’s pretty clear that the star was feeling disillusioned as early as 2005, when he grumbled about “putting out an album every year trying to keep [DreamWorks Records] afloat”.

The Oklahoman also lost many possible fans when he headlined President Donald Trump’s “Make America Great Again” concert, a polarizing event which many stars sat out regardless of their political views. When asked by The Atlantic about his decision to headline Trump’s inauguration-eve shindig, Toby said bluntly: “If the president of the frickin’ United States asks you to do something and you can go, you should go instead of being a jack-off.”

As for Number 45’s oh-so-controversial comment about grabbing women by their private parts, the musical powerhouse brushed it off in the same interview, saying that “Guys talk like that everywhere”. Yet those who think that Toby has stepped away from the public eye due to his political views couldn’t be any more mistaken.

Toby shocked fans in June 2022 by sharing his stomach cancer diagnosis and health journey on Instagram. In an announcement, the Oklahoman shared that he had spent “the last 6 months receiving chemo, radiation and surgery. I am looking forward to spending this time with my family. But I will see the fans sooner than later. I can’t wait.”

Obviously, Toby also cancelled his 2022 tour indefinitely, although it was speculated that only a handful of shows would be cancelled. It’s great to see the hitmaker prioritizing his health and maintaining a positive attitude despite everything that’s going on, as it’s been reported by reputable sources that stomach cancer has a 5-year survival rate of between 70% to 6% depending on its spread.

The country music mogul has received an outpouring of love not only from fans, but also from his hometown of Moore, a place that Toby has always held close to his heart. We hope that he makes a full and speedy recovery!