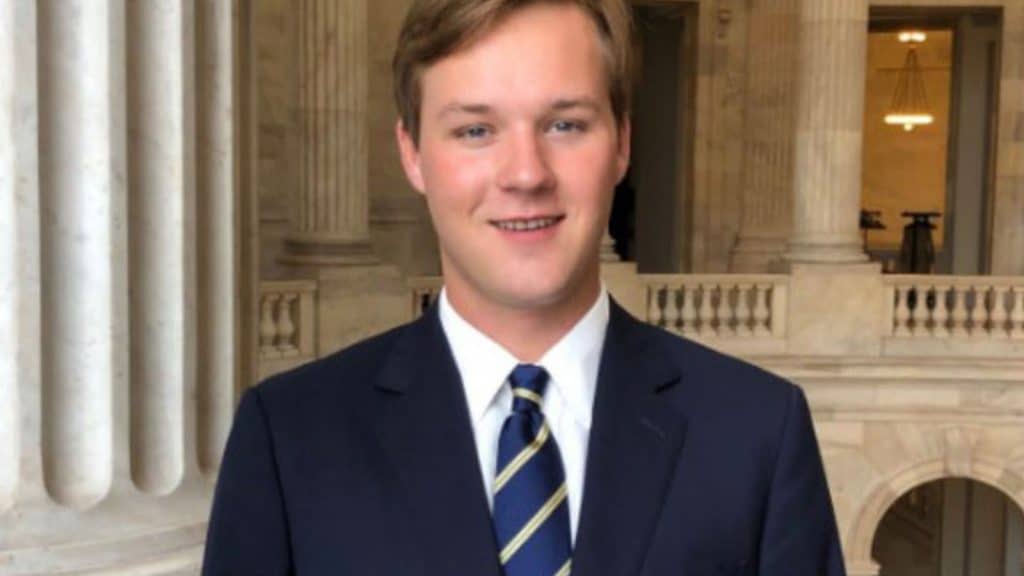 Who is Buckley Carlson?

Buckley Carlson is an American celebrity child, best known as the son of the TV host and political commentator Tucker Carlson.

Buckley Carlson was born in 1997, in Virginia, USA. He hasn’t revealed his exact date and place of birth in the media. However, he’s the second oldest child of Tucker and his wife Susan Thomson (nee Andrews) and their only son. He has an older sister, Lillie, born in 1995, and Hopie and Dorothy, who are younger than him, born in 1999 and 2002.

His parents met while in high school, and married on 10 August 1991 in the school chapel. Susan is the daughter of the school’s headmaster.

Buckley shares his name with his uncle and Tucker’s brother, Buckley Swanson Peck Carlson. They are very close, and Buckley has learned a lot from his uncle.

Growing up in an affluent family, Buckley was exposed to luxury early in life, and attended a prestigious private school. After matriculating, he enrolled at the University of Virginia, from which he obtained a Bachelor of Arts degree in Government and Political Science.

Buckley started his career in 2017 as a Communication Intern under Donald John Trump; this lasted for three months, after which he left his post.

He returned in July 2019 as a Staff and Press Assistant for Jim Banks, the US Representative for Indiana’s 3rd Congressional district. In September that year, Buckley was promoted to the Special Assistant position, in which he served until January 2020, when he was yet again promoted, taking the position of Press Secretary for Jim Banks, and after a year of successful service, Tucker Carlson’s son was named the new Deputy Communications Director.

Well, I had to look. So I did.
Yes, Tucker’s son works for the House of Representatives.
As Communications director. Meet Buckley Carlson
1/ https://t.co/IcfMGBC0T4 pic.twitter.com/OO5Of7tWdm

He was slowly building his professional career away from his father’s spotlight, though still integrated deeply in politics.

However, news broke out that Tucker asked Hunter Biden for help getting Buckley into an elite Washington University back in 2014.

This didn’t affect his progress, and in March 2022, Buckley was appointed as Communication Director of the House Republican Study Committee. Moreover, since January 2021, he’s also been serving as the Communications Director for Jim Banks.

As of mid- 2022, Buckley Carlson’s net worth has been estimated at close to $800,000, earned through his young but already successful career.

Buckley is very silent about his personal aspirations. This has led to a few rumors, but nothing has been confirmed so far. According to reports, Buckley is currently single and focused only on his rising career.

Buckley Carlson has light brown hair and blue eyes. He’s 5ft 8ins (1.73m) tall, and weighs about 155lbs (70kgs). His vital statistics are unknown, but he has an average figure.

Tucker Swanson McNear Carlson was born on 16 May 1969, in San Francisco, California, USA, the son of Lisa McNear, an artist, and Dick Carlson, the director of Voice of America and the US Ambassador to the Seychelles. He has a younger brother, Buckley Peck Carlson.

His parents divorced in 1969, and his father gained custody of their two boys, as Tucker’s mother went on to live a bohemian lifestyle.

The trio moved to the La Jolla neighborhood of San Diego, California, when he was in his first grade – Tucker went to La Jolla County Day School.

Three years later, Tucker’s father remarried to Swanson Enterprises heiress Patricia Caroline Swanson. This marriage saw Tucker leave for boarding school in Switzerland, College du Leman, but he was kicked out, after which he attended another boarding school, St. George’s School in Middletown, Rhode Island, where he met his future wife and Buckley’s mother.

After matriculation, he enrolled at Trinity College in Hartford, Connecticut, from which he obtained a Bachelor of Arts in History.

After his studies ended, Tucker aspired to join the Central Intelligence Agency (CIA); however, he was declined. He then became interested in journalism, as his father encouraged him, saying that they would accept applications from anyone.

Before becoming one of the most popular conservative political commentators, Tucker worked for a number of publications. He launched his career as a fact checker for Policy Review, then joined the Arkansas Democrat-Gazette newspaper as an opinion writer.

As his career in the print media progressed, he was creeping in on such high-profile magazines as Reader’s Digest, The New Republic, New York Times Magazine, and The Wall Street Journal. However, what really pushed him forward was the interview he did with George W. Bush for Talk magazine in 1999. This piece was later used as bad publicity for Bush in his presidential campaign in 2000.

Tucker launched his television career in 2000 as the co-host of the short-lived talk show “The Spin Room” which aired on CNN. The following year, he joined Robert Novak, James Carville, and Paul Begala in the show “Crossfire”.

He left CNN in 2005, after which he started his own show on MSNBC, “Tucker”, which lasted until 2008, when it was canceled due to low ratings.

He joined Fox News in May 2009 as a contributor, and started appearing in such shows as “Red Eye w/Greg Gutfeld”, and “Hannity”, and as co-host of “Fox & Friends Weekend”, replacing Dave Briggs.

It was in 2016 that he got his own show on Fox, “Tucker Carlson Tonight”, which has become one of the most watched shows on the network; the premiere episode had 3.7 million views.

He has hosted a number of people from across the political and cultural spectrum, including Donald Trump, Lisa Boothe, Jeanine Pirro, Matt Gaetz, and many others.

Tucker has often been criticized for his view on various political and social issues, including Black Lives Matter and racism,, abortion prohibition, wars in Iraq, and others.

However, he remains on Fox until the present day, and recently launched the new show “Tucker Carlson Today”. To speak further of his accomplishments, Tucker was the editor-in-chief of the right-wing news and opinion website “The Daily Caller”.

According to reports, Tucker Carlson’s net worth is estimated at $50 million as of mid-2022.