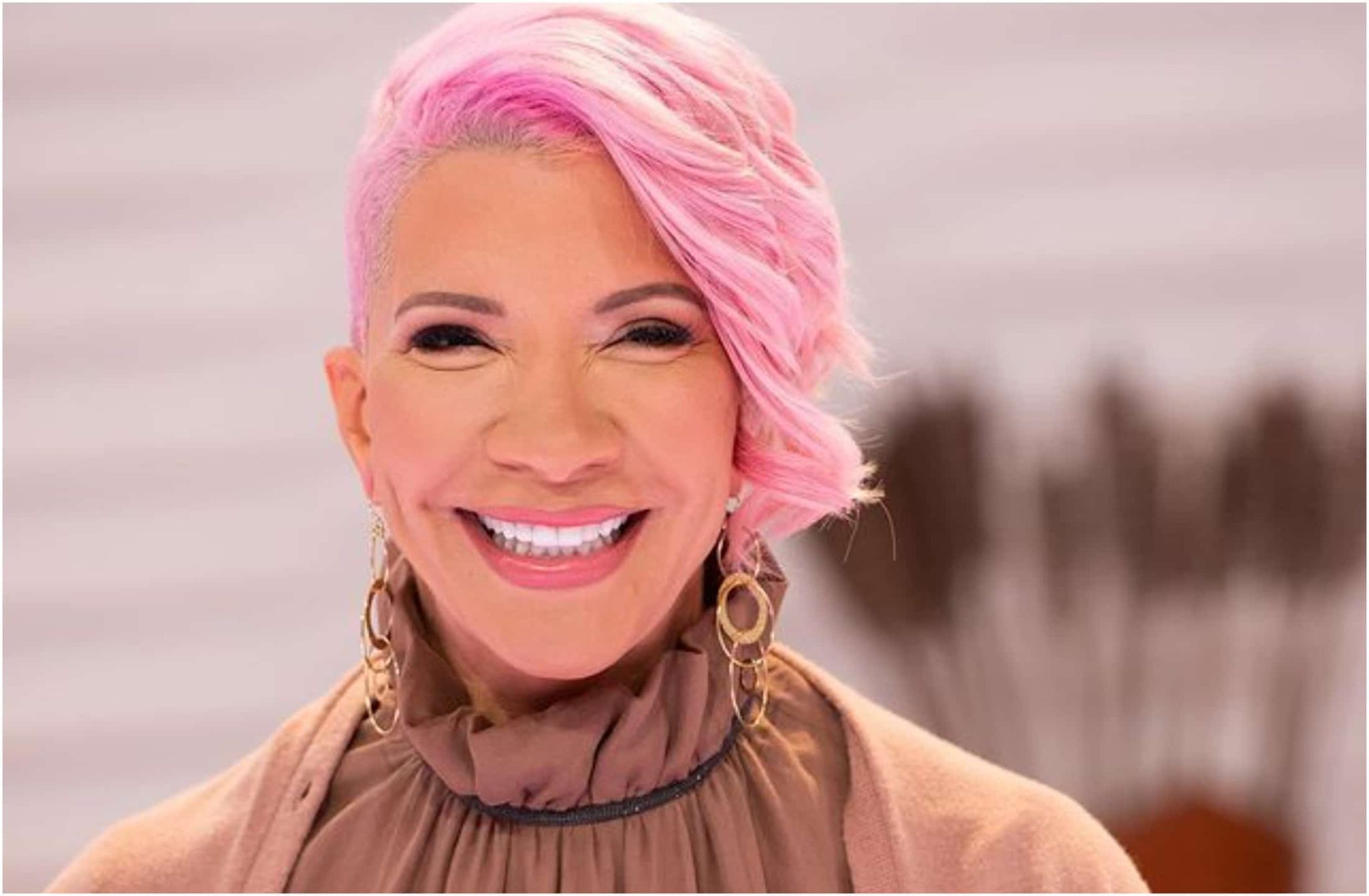 Rebecca was born in Benton Harbor, Michigan USA on 24 December 1965 – her zodiac sign is Capricorn, and she holds American nationality. She’s an actress, TV personality and singer-songwriter, with only a single acting credit to her name: Rebecca played Grace in the 2018 short comedy movie “Blueberry”, written and directed by Martina Mossell Lee, and which starred Stevie Johnson, Evan Alex and Hilty Bowen. It follows a podcast host who wants to meet his role model Harambe Cornell, but can’t because his nine years old son wants to compete in the Mr. Rainbow’s contest dressed as a blueberry. The movie won a First Look, USA Jury Prize for Comedy.

Rebecca was raised in Benton Harbor alongside her brother Samuel Taylor and sister Elizabeth, by their father Jack Winston Lund and mother Anne Mae Parks; not a lot is known about her family, as she respects their privacy, but it’s said that her father was a businessman, and her mother a lawyer.

Rebecca grew up being interested in music, and began taking piano and voice lessons when she was eight years old. It was only after she enrolled at Lew Wallace High School that she became interested in acting, then appearing in many plays performed at the school, as well as in a couple at a local theatre.

Rebecca matriculated in 1984 and then enrolled at Western Michigan University, from which she graduated with a Bachelor’s degree in musical theatre in 1987.

Although Rebecca’s appeared in only a single movie and no TV series, she could’ve been seen acting in many theatre plays, with some of the most popular amongst these having been “The Music Man”, “The Whiz”, and “Oklahoma”; she’s also known for her portrayal of Deena in “Dreamgirls”, performed at The Black Civic Theatre.

She’s also a musician and has released a couple of songs, including “Can I Say”, “Never Be The Same”, and “BREATHLESS”.

In 2009, Rebecca made a guest appearance in the talk-show “E! True Hollywood Story”, and the following year saw her appear in both “The Wendy Williams Show” and “The Mo’Nique Show”.

In 2010 and 2011, she starred in her and her husband’s reality show “The Family Crews”, which follows their and their children’s lives, and the following a couple of years saw her appear in several popular talk-shows, including “Life After”, “The Queen Latifah Show” and “The Arsenio Hall Show”.

She appeared alongside her husband in a 2018 episode of the show “Dr. Phil”, in which Terry spoke about being a father, and the #MeToo movement.

Some of Rebecca’s most recent appearances have been in the 2021 documentary series “Now with Natalie”, and the 2022 talk-shows “The Hollywood Moment” and “About Last Night”.

Rebecca launched her self-titled YouTube channel on 13 March 2013, and it’s today subscribed to by close to 2,000 people, while it numbers over 500,000 views of all her videos combined. She’s mostly focused on uploading her original songs and motivational videos, and we’re going to mention three of Rebecca’s most popular YouTube videos, which’ve helped her build herself a fanbase on the internet.

Her second most popular video “”BREATHLESS” – OFFICIAL MUSIC VIDEO! (Oliver Nelson Remix)” has been viewed over 60,000 times since 15 August 2017.

Rebecca’s third most watched video “DeVon Franklin speaking at The Rebecca Crews Women’s Conference” was uploaded on 7 September 2016, and has since been watched close to 50,000 times.

Rebecca became a senior vice president at Crews Arts Ltd. in March 1999, while she’s today the CEO and president at Honeybear Music.

Rebecca prefers to keep the details of her love life to herself, but has still allowed her fans to have a glimpse into it. She and Terry Crews met when he was 20, and she was 22, and married after a year of dating in a private ceremony on 29 July 1989, attended by many of their friends and family members. Rebecca and Terry have a son and four daughters together, as well as a grandchild.

In Terry’s autobiography “Manhood: How to Be a Better Man or Just Live with One”, he revealed that he was once addicted to pornography, and that it was through rehabilitation and with Rebecca’s help that he was able to overcome it in 2010.

Neither of the two have spoken of any other people whom they’ve perhaps been with, so as of August 2022, Rebecca’s married to Terry Crews, and they have five children together.

Rebecca enjoys running her social media accounts, and is today followed by nearly 100,000 people on Instagram, while she’s uploaded close to 2,000 pictures onto the network, most of which feature her during her everyday life.

She’s a philanthropist and has donated money to many charities working with underprivileged children; she’s also an activist, and today supports the LGBT community and the movement Black Lives Matter.

Rebecca’s passionate about travelling, and has been all around the world for both work and pleasure – her dream travel destination is Dubrovnik, Croatia.

She enjoys watching movies late at night – her favorite actor and actress are Brad Pitt and Amanda Seyfried, while a couple of her favorite films include “The Curious Case of Benjamin Button”, Meet Joe Black” and “Dear John”.

As of August 2022, Rebecca’s net worth stands at over $20 million, while her husband Terry’s net worth’s been estimated at over $25 million.

Who is her husband Terry?

Terry Alan Crews was born in Flint, Michigan USA, on 30 July 1968 – his zodiac sign is Leo, and he holds American nationality. He’s an actor, TV personality and retired American Football player, with close to 100 acting credits to his name, while he’s probably still known best for his portrayal of President Camacho in the 2006 adventure science fiction comedy movie “Idiocracy”, written and directed by Mike Judge, and which starred Luke Wilson, Maya Rudolph and Dax Shepard. It follows Private Joe Bauers who’s entered a hibernation program, and has now awoken far in the future in which people are so stupid that he’s the most intelligent man alive; the movie was nominated for a Teen Choice Award for Choice Movie: Breakout Male (Justin Long).

Terry was raised in Flint alongside his one older and one younger sibling, by their father Terry Crews and their mother Patricia Ann (nee Simpson); Patricia was only 18 when she gave birth to Terry. Terry’s father was abusive towards Patricia and was an alcoholic, so Terry found comfort in the flute which he had received from his aunt, and went on to play it for eight years. He studied at Interlochen Arts Academy prior to enrolling at Western Michigan University, and received a full athletic scholarship after joining the school’s football team; he graduated with a Bachelor’s degree in 1990.

He launched his acting career in 2000, when cast to play Vincent in the action science fiction mystery movie “The 6th Day”, and a couple of his following roles were in the 2001 action crime film “Training Day”, the romantic comedy movie “Serving Sara” and the comedy film “Friday After Next” both in 2002.

Terry gained recognition in 2004, with his portrayal of Porter in the popular crime comedy movie “Starsky & Hutch”, directed by Todd Phillips, and which starred Ben Stiller, Owen Wilson and Snoop Dogg. It follows two police officers as they’re patrolling the city in their white Ford Gran Torino – the movie won three of the 14 awards for which it was nominated. A couple of Terry’s other notable performances in the decade were in the 2004 crime comedy movie “White Chicks”, the 2005 sports crime comedy film “The Longest Yard”, and the 2009 action science fiction adventure movie “Terminator Salvation”.

He played Martin Jacobs in the 2013 comedy “Scary Movie V”, directed by Malcolm D. Lee and David Zucker, and which starred Simon Rex, Ashley Tisdale and Charlie Sheen. It follows a couple who are being stalked by a demon, and the movie was nominated for five awards.

Three of Terry’s most recent roles have been in 2022, in the episode “The Return of Uncle Nedward” of the comedy series “Side Hustle” and the  episode “Evie, Joe” of the fantasy series “Tales of the Walking Dead”, as well as 22 episodes of the short animated adventure series “Craig of the Creek” since 2018 (voice role).

Terry’s won one of the 24 awards for which he’s been nominated, and received his own star on the Hollywood Walk of Fame in 2021.

On 10 October 2017, Terry revealed that a male Hollywood executive had groped him at a party a year earlier, and it was later revealed that it was Adam Venit, who was at that time head of the motion picture department at William Morris Endeavor; Adam was demoted, and suspended for a month.