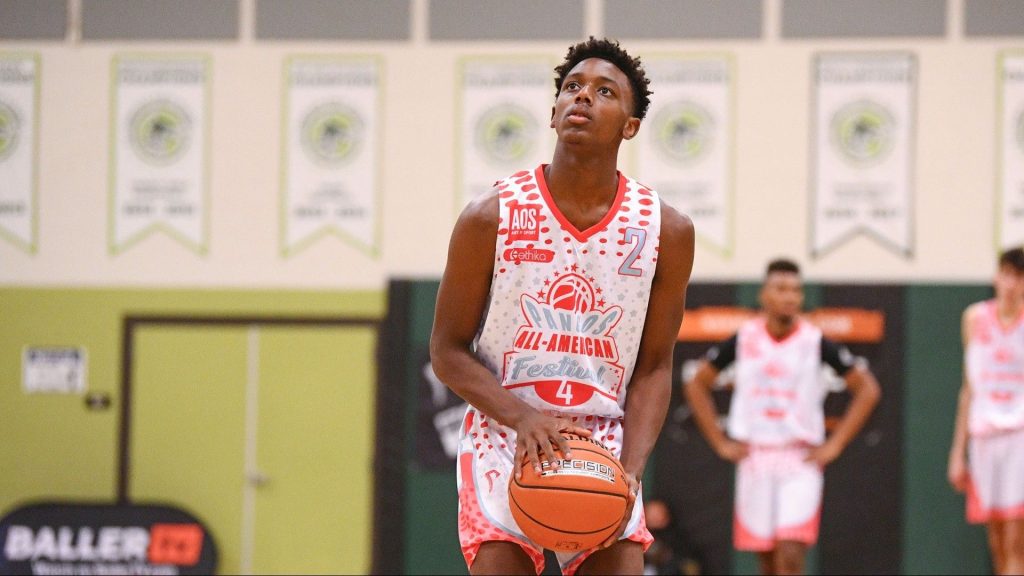 Who is Hercy Miller?

An aspiring basketball player, Hercy Miller, named a ‘diamond in the rough’ by Courier Journal’s sports reporter Brette Dawson, came into the limelight after he was seen playing as a point guard for the Red Hawks team of the Minnehaha Academy, Minneapolis, Minnesota USA high school.

People wanted to know more about him, the life and sports career of this youngster, and if you are one of those, we will reveal the untold truth about Hercy Miller.

Hercy was born under the zodiac sign of Aries on 28 March 2002, in California, USA – his exact birthplace is unrevealed – holds American nationality, and comes from a family of African-American descent.

He was raised by his parents, and is a celebrity child – his father is a famous rapper, actor, music producer, and entrepreneur Percy Robert Miller Senior better known by his stage name, Master P; Hercy’s mother is a former rapper Sonya C. Miller, who divorced his father after nearly 25 years of marriage.

Hercy has eight siblings, namely Romeo, Veno, Vercy, Intylyana, Cymphonique, Itali, Mercy, and Tytyana, who sadly died of an overdose on 28 May 2022, aged 29.

Speaking of Hercy’s educational background, as mentioned, he attended the Minnehaha Academy, and upon matriculating in 2020, he enrolled at the University of California, Los Angeles (UCLA), and continued playing basketball.

Hercy Miller getting the BAG 💰

Hercy played for the UCLA Bruins, and in March 2020, he was offered to the Western Kentucky Hilltoppers and other teams before he transferred to the Tennessee State Tigers college team on 12 July 2021.

On 8 December 2021, Hercy entered the transfer portal, and on 2 March 2022, he transferred to the Xavier Musketeers, the college team of Xavier University in Cincinnati, Ohio.

On 25 May 2022, Hercy again entered the transfer portal, and on 28 June 2022, he moved to the Louisville Cardinals – the ‘Cards’ – the National Collegiate Athletic Association (NCAA) team representing the University of Louisville, Kentucky, for which Hercy currently plays as a point guard. Many sports reporters commented about his ball-handling skills as phenomenal, saying that he is able to get to the basket off the dribble and score at will, and his jump shot makes him a threat from the 3-point line too.

There have been various rumors concerning both Hercy’s love life and his sexual orientation, however, he prefers to keep his private life under wraps. He hasn’t commented about any relationships, and it’s assumed that he’s single, as of August 2022.

His Instagram account, which has been followed by over 135,000 people, also doesn’t reveal much about his personal life, however, you can see dozens of photos and videos featuring him playing basketball.

As of August 2022, there is no information about his net worth, however, it’s known that although NCCA basketball players don’t get paid, are getting a college education, the best coaching, great training, and the chance to eventually play in the National Basketball Association (NBA) teams.

Who is his father Master P?

Master P was born under the zodiac sign of Taurus on 29 April 1970, in New Orleans, Louisiana, where he was raised by his parents alongside his four siblings. He has a sister, Germaine, and brothers, Kevin, Corey and Vyshonne. Corey is also a rapper, perhaps known better by his stage name ‘C-Murder’, and Vyshone, also a rapper, goes by the name ‘Slikk the Shocker’.

Master P rose to prominence in the mid-’90s with his hip hop group TRU, but before his music career, he played basketball for the University of Houston on an athletic scholarship. In his freshman year, he transferred to Merritt College, in California, from which he graduated with a Bachelor’s degree in Business administration.

After he inherited $10,000 as part of a malpractice settlement following his grandfather’s death, Master P opened a record store called No Limit Records and Tapes, in Richmond, California. In 1990, he released the cassette tape “A Mind Of A Psychopath”, and launched his music career.

His debut album “Get Away Clean“ was released on 12 February 1991, followed by his album “Mama’s Bad Boy“ in April 1992, while his first collaboration album with the TRU, “Who’s da Killer?”, was released in 1993. During his career, Master P’s released 15 albums, and in 2001, he won the award for “Favorite Rap/Hip-Hop Artist” at the American Music Awards.

Speaking of his personal life, from 1989 until 2014, he was married to Hercy’s mother, Sonya, who filed for divorce asking for 40% of their assets.

This certainly wasn’t a small amount of money, considering the fact that in 1998, Master P was ranked 10th on Forbes magazine’s list of the US’s 40 highest paid entertainers, with a net worth estimated at over $55 million. In 2013, his net worth was estimated at $200 million, making him one of the wealthiest figures in the American hip-hop scene at that time.

After the divorce, Master P is said to have dated Simin Hashemizadeh, who presents herself as an entrepreneur and philanthropist on her social media platforms. According to sources, this turned out to be the truth, and the two are still dating.

Master P is also known for his philanthropy, and in May 2022, he and Hercy threw a birthday party for two-year-old Ocean Robertson, a Louisville shooting victim who was recovering in the local hospital. He shared a photo on his Instagram featuring Hercy holding the baby in his lap, and the photo has amassed over 15,000 likes.

Judging by Master P’s Instagram posts, he seems to be very proud of his son, Hercy, and his success as a college basketball player, since he daily shares photos featuring Hercy’s workout routine and games.