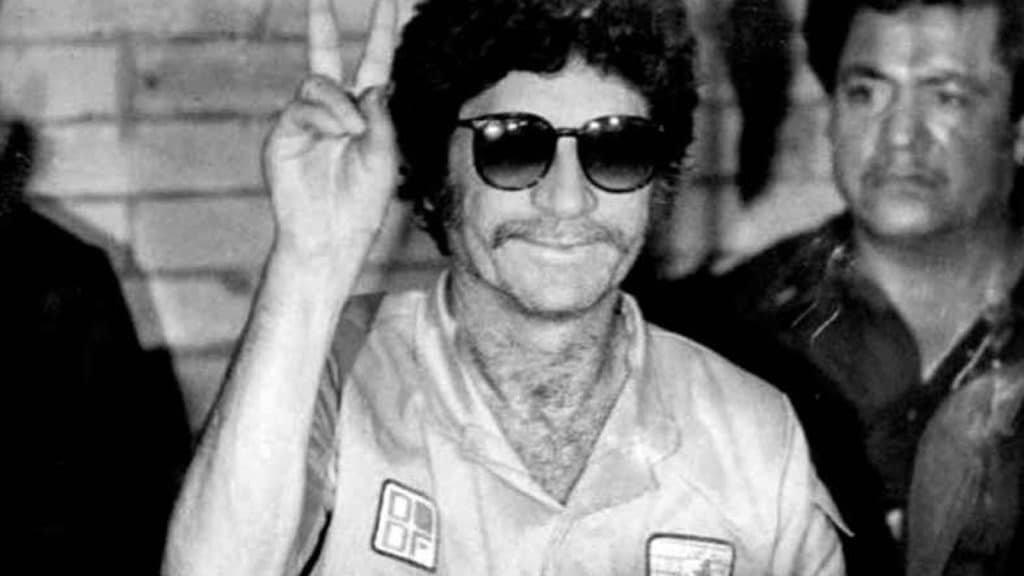 Who is Rafael Aguilar Guajardo?

Born on an unspecified date in1950, in Juárez, Chihuahua, Mexico, Rafael Aguilar Guajardo was a Mexican narcotrafficker of Hispanic descent and Christian faith. Although definitely not the most famous criminal of his time, he’s widely known to the public thanks to being the leader of the Juárez cartel, before which he was a somewhat important captain and later the right-hand man of his boss at the time. He ruled the organization with an iron fist until his death at the age of 42 or 43 on 12 April 1993, garnering a significant amount of cash, power and infamy throughout his prominent six years. His notoriety notwithstanding, what truly propelled his name into the modern mainstream was being posthumously played by an actor in Netflix’s remarkably successful docudrama TV series entitled “Narcos: Mexico.”

#HappyBirthday The Lord Of The Skies. #OnThisDay In 1956: Amado Carrillo Fuentes was born. Amado led the #JuarezCartel after killing his boss Rafael Aguilar Guajardo and was known for his fleet of jets used to transport drugs.

Amado would have turned 65 today. pic.twitter.com/HaH96tiwhE

Guajardo grew up in a neighborhood that resembled most others in Mexico at the time. Poverty was at an all-time high, the country was in a deep struggle with corruption, a barely functioning economy, and severe lack of education across its populace. Aguilar was no exception to the crime-infatuated youth, and like almost all of his peers, began helping out minor criminal operations in his birthplace. His only interest revolved around making as much money as possible in the shortest amount of time. Hence, it’s possible that he never attended elementary school, while he most definitely never obtained a higher education.

Rafael initially earned money through small-time criminal activities, such as petty robberies and occasionally extortion. When he entered his twenties, he and many others caught wind of this new ultra-profitable business that required co-operation across the entire state of Chihuahua – marijuana smuggling. The business had been there for a while, but thanks to a certain Rafael Caro Quintero – a corn farmer at the close of his teens who used his knowledge of biology and chemistry to breed a new, super potent strain of the plant – it was greatly sought-after, especially in the US.

Marijuana production in Chihuahua wasn’t booming though, but just southwest, in the neighboring state of Sinaloa, Caro Quintero teamed up with Miguel Ángel Félix Gallardo and Ernesto Fonseca Carrillo (‘Don Neto’) to create the Guadalajara cartel. This organized crime group was cultivating hundreds of acres of marijuana that they needed to somehow deliver to the US. They didn’t share a border with the country, and the state in front of them belonged to an entirely different organization, and thus they made a deal with Chihuahua’s Juárez cartel, which would take over the distribution of Sinaloa’s produce. Like any adolescent with a troubled life, Aguilar saw this venture as a permanent way out of poverty.

Pablo Acosta Villareal, also known as ‘El Zorro de Ojinaga’ (‘The Ojinaga Fox’), formed the Juárez cartel, initially for the sole purpose of smuggling marijuana into the US, which turned out to be essentially effortless considering the corruption of their border control and local police. Running his operation in the tiny border town of Ojinaga, whose roads directly reached into Texas, gave him the ability to ship a virtually endless supply of narcotics. Aguilar took no time to join the cartel, and quickly advanced through the ranks, thanks to never disputing an order and showing an enviable level of street intelligence.

In the early-to-mid 1980’s he became second in command of the Juárez cartel, and eventually took over when Villareal had apparently made one too many enemies, being gunned down by Mexican Federal Police helicopters in the village of Rio Grande, Chihuahua, in 1987. Immediately upon inheriting the cartel, Aguilar became the sole boss of the world’s most successful narco-trafficking operation, smuggling more than 60 tons of cocaine per year for the Colombian cartels Medellín and Cali. On top of that, he was already moving unknowable amounts of marijuana and heroin as well. He then began upgrading the operation even further.

Originally from Sinaloa, being the nephew of ‘Don Neto,’ Amado Carrillo Fuentes was sent to help, and to a point oversee the Juárez cartel business, ensuring that the Guadalajara cartel wasn’t being given less than they were earning. He became so efficient at improving smuggling logistics and overall operation success, that Aguilar immediately placed him as second in command. They worked together to move larger cargos than ever before, using their imposing Juárez shipping and construction site to even enable smuggling by air. Amado personally flew the first few planes to the US, initially on a small scale, transporting up to 20 kilograms per flight.

With Rafael’s trust and investment, as well as Carillo’s ideas, the cartel was raking in billions of USD in revenue, allowing for ever more complex ways of achieving their goals. Guajardo was able to conduct his business in broad daylight, since he had the entirety of his state police on the payroll. At the peak of power, he even became a federal police commander of Mexico’s Direccion Federal de Seguridad (DFS) – intelligence agency and secret police, whose influence he used to ‘investigate’ and clandestinely ‘apprehend criminals,’ killing off a lot of his competition.

In the early 1980’s, Rafael and Amado got along so well they were considered equals. Although Rafael still had the final word, of course, Amado was able to question all of his decisions, and run a massive part of the operation independently. One issue, on which they heavily disagreed, was the principle of money versus pride. Aguilar had a feud with Pedro Avilés Pérez, due to which he refused to trade with the Sinaloa cartel. Amado saw this as a massive problem, worrying about their diminishing income. Eventually, after Guajardo refused outright to ever cooperate with Pedro, Amado arrived in Cancún, entered a bar, and shot Rafael twice in the chest and once in the left eye. Fuentes immediately took over, becoming one of the most notorious narcotraffickers of all time.

What was Rafael Aguilar Guajardo’s net worth?

Between the start of his career and 1993, Rafael Aguilar Guajardo had made more than $100 million, which in today’s value is more than $35 billion. He earned his monstrous wealth thanks to smuggling narcotics from South America into the US for decades, especially within the last six years of his career. His assets at the time also included villas, nightclubs, and even a 7,000 square-kilometer super-mansion in Acapulco, all of which were seized by the Mexican government.