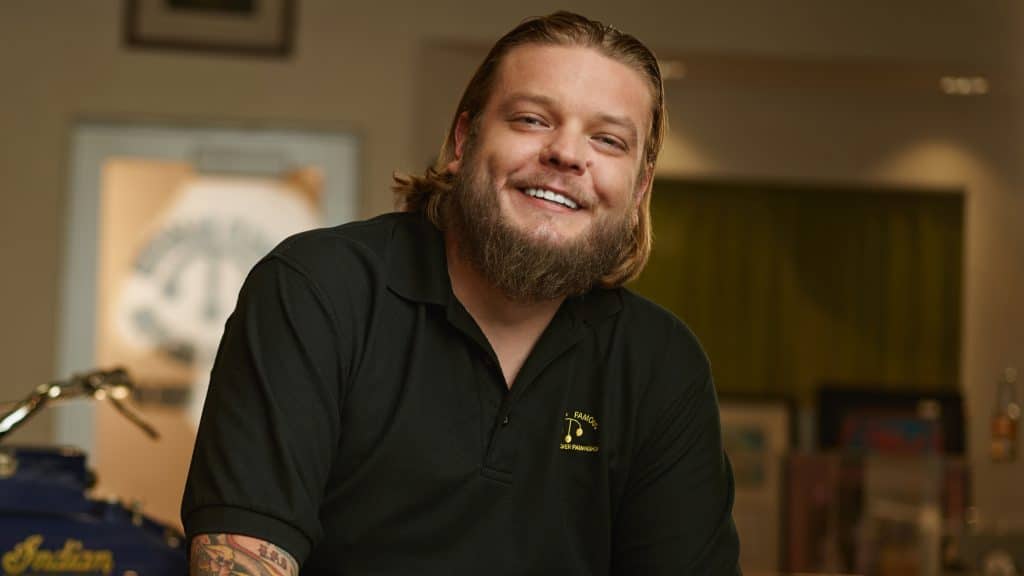 What is “Pawn Stars”?

Shortly after its July 2009 debut, “Pawn Stars” would become History’s highest-rated show and the second-favorite reality show after “Jersey Shore”. Each episode sees customers bring a diverse variety of goods to pawn or sell after haggling with staff. Another key feature of the successful series is the conflict amongst cast members.

Local experts such as Danny Koker and Rick Dale are also brought in to appraise customers’ goods. If those names sound familiar, it’s because the two men were later given their own spin-off shows – “Counting Cars” and “American Restoration” – which premiered in the 2010s.

“Pawn Stars” also has an interesting origin story. Brent Montgomery and Colby Gaines of Leftfield Pictures spent a weekend in Las Vegas in 2008; inspired by the plethora of pawn shops in Sin City, they began interviewing owners who would be interested in starring in a brand-new reality series. They found the Gold & Silver Pawn Shop less than two miles away from the Las Vegas strip; the store had previously appeared in a 2003 episode of “Insomniac with Dave Attell” and a 2001 PBS documentary.

As it happens, Rick had spent years looking for a production company interested in his shop. The nifty businessman joined forces with Brent and Colby; the series’ idea was then pitched to a handful of networks, and eventually picked up by Nancy Dubuc of History, who was actively seeking out fresh content to attract new audiences.

A witty staff member at Leftfield changed the original title from “Pawning History” to “Pawn Stars”. In January 2019, episodes increased in length to 60 minutes, with the change implemented since the beginning of season 16. To date, “Pawn Stars” is dubbed in over 30 languages, and shown in over 100 countries.

Vintage and antique items, as well as jewelry, are the most pawned items at Gold & Silver. The store had over 12,000 items in its inventory as of July 2011, a number that is expected to have increased considerably. Each episode follows a similar format, with five to six objects shown and a staff member explaining the history behind each item. If the potential buyer has trouble evaluating an item, he calls in a knowledgeable expert, who will determine its authenticity and potential value, plus the cost of restoration if necessary.

As mentioned, many episodes of “Pawn Stars” chronicle the turbulent relationship between the main cast members. Corey and Austin are considered by many to be the show’s underdogs, as their intelligence and competence is often questioned by their elders. Austin and the Harrisons have become popular household names despite their shortcomings: so much so, in fact, that each episode contains one or several multiple-choice trivia questions regarding the featured items, the shop and its inventory, or one of the cast members.

“Pawn Stars” is considered a reality TV heavyweight and has inspired “Hardcore Pawn”, “Cajun Pawn Stars”, and a whole catalogue of related shows. As a result, Gold & Silver has also enjoyed an upswing in popularity and a tremendous boost in its sales – the store was pulling in over 1,000 customers a day in October 2010, over ten times as much as in earlier years.

Which of these items would you negotiate a deal for? #PawnStarsDoAmerica airs Wednesdays at 8/7c on @HISTORY.

Posted by Pawn Stars on History on Monday, November 14, 2022

A generous production budget allowed for 30 new employees to be hired, as necessary; the store’s showroom was also expanded in a $400,000 renovation project; in fact, Gold & Silver has increased almost a dozen times since it was opened by Old Man, and the showroom currently measures 15,000 square feet; Rick has mentioned that he planned to build a staff-only gym above the store.

Original brand merchandise is also sold by Gold & Silver for afficionados. The store runs design competitions on social media, in which fans submit their ideas for publicity, thus cutting down on costs. Austin and Corey also charge up to $1,000 per club appearance – not bad for a few hours’ work. Customer confidentiality laws mean that only main cast members can work the main counter during filming; showroom entrance is also restricted to vetted customers, and the store temporarily closes to the public during filming.

The Truth about “Pawn Stars”

“Pawn Stars” is full of polarizing figures, all of whom have had various run-ins with the law. The store itself isn’t exempt from lawsuits either: in 2014, a disgruntled customer named David Walters filed a criminal complaint, claiming that his niece had stolen his valuable coin collection, and sold it to the pawn shop – also claiming that his collection was purchased by Gold & Silver for just $12,375, despite allegedly being worth almost $50,000. When he realized the coins were missing, he informed authorities, but by the time the police got in touch with Gold & Silver, the collection had vanished. A spokesperson for the store gave a vague explanation, saying that the coins may have been sold, put apart for evaluation, or even melted down. Despite not knowing where the coins were, the spokesperson was adamant that the collection was worth nowhere near $50,000.

Despite David’s $5 million lawsuit making headlines around the country, he wasn’t successful in court. In Nevada, pawn shops are obliged by law to keep items for up to three months in case owners want them back – but with gold coins being an exception.

That year, “Pawn Stars” received plenty of negative publicity after Corey’s night out at Spectators Bar went horribly wrong. Online sources claim that the young reality star was participating in a sponsored motorcycle tour with some friends when they stopped by the bar, which is located in Jefferson City, Missouri. Corey, who had reportedly been partying for a whole week, began downing shots before lowering his pants and urinating on a barstool – leaving an underpaid staff member to clean up after him.

The bad news doesn’t stop there – before being kicked out of the bar, Corey posed for fan photos without pulling his pants up, and threw a barstool across Spectators. He later apologized for his bad behavior, and kept a low profile for the next few months.

In 2015, Rick Harrison was also lambasted by some netizens after an unfortunate interview with CNN, in which he shared his disdain for men or transgender women being allowed to use women’s restrooms. The backlash was so bad that he feared losing the show, and years later his comments were cited as one of many reasons to cancel “Pawn Stars”. Luckily for Rick, transgender rights weren’t such a politically-charged issue back in 2015; in today’s environment, he and the show could have been cancelled almost instantly.

2012 was another annus horribilis for the popular series, as Richard and Rick were accused of assaulting and choking a disabled Vietnam veteran named Daniel Callahan who was aged 62. Daniel claimed to have taken his Model 96B rifle to Gold & Silver for appraisal, when the Harrisons put him in a chokehold and dragged him through the premises before tossing him out onto the sidewalk. During the alleged incident, the veteran’s rifle and walking stick were also damaged.

Daniel filed a $20,000 lawsuit against the store, seeking compensation for the physical assault. However, Corey fiercely defended his family members and claimed that the veteran was the aggressor all along, acting erratically and having to be forcibly removed from premises due to his agitated behavior.

Rick and Richard weren’t the only cast members to land themselves in hot water, as Austin was filmed fighting with a man, and fleeing the scene. The TV star claimed that he’d been forced to act in self-defense, as the victim had threatened to pull a gun on him and his friends. The anonymous victim was seen injured and bleeding on the roadside, but the incident didn’t make it to court.

To end 2012 on a bad note, the nude modeling past of a Silver & Gold employee named Olivia Black was exposed by the National Enquirer in a salacious article. Olivia had appeared in 13 episodes of the show at the time: two days after the article was published, “Pawn Stars” producers banned her from appearing on-screen, but allowed her to keep working at the store. Olivia quit a few months later for unknown reasons, and shared her intentions of filing a lawsuit against Leftfield Pictures. It remains unclear if the case was settled out of court.

Finally, cops raided Austin’s home in 2016, and arrested him on suspicion of almost two dozen felonies. At the time, Austin was already being investigated due to sexual assault accusations that had been made against him. Although he was eventually cleared of the sexual assault charges, cops found eight unregistered guns and plenty of meth, Xanax, weed and other narcotics during the raid.

Austin pleaded guilty to a gross misdemeanor of drug possession and a felony weapons charge, and was sentenced to three years’ probation which included extensive counseling. The conditions of the plea deal he accepted meant that if he didn’t break probation, his felony charge would be dropped, so expunging his criminal record.

Corey’s physical transformation over the years has also been a hot topic of discussion amongst “Pawn Stars” viewers. Some fans suspected that the media personality was ill due to the drastic change that occurred in 2011: however, Corey cleared things up three years later in an interview with “Good Morning America”, admitting to having undergone weight loss surgery after a fateful doctor’s visit in which he learned he was pre-diabetic.

“Literally, I’m driving home from the doctor’s office, kind of freaked out about it, and I see the place where they do lap band surgeries, and I just pulled in and said, ‘What does it take to have the surgery?’” Corey told the morning show. As he was short of money at the time, he paid the surgery off with four credit cards.

The lap band surgery helped Corey lose almost 200 pounds, approximately half his body weight, later saying “It’s weird to feel better at 31 than you did at 25.” Of course, although the surgery helped, Corey had to put in plenty of hard work to maintain his physique with a strenuous exercise plan and diet – apparently, the reality star’s stomach can only hold up to five ounces of food.

Lap band surgery is essentially a lifetime commitment, forcing Corey’s relationship with food and exercise to do a 180. These days he makes regular visits to the gym, and boxes five days a week; he is also an avid snowboarder again, after having to drop the sport in his young adulthood as he was too big to strap his feet onto the board.

With a grueling exercise and diet regime of his own, Austin was also inspired to shed almost 100 pounds, over 45kgs, after seeing how good his friend looked and felt. Corey’s best friend spoke candidly about his experience in an interview with People magazine, saying: “It was time for me to get healthy. I started at 320 pounds and now I’m down to 225.” At the beginning of his lifestyle change, he cut out all processed foods except mustard; these days, Austin enjoys everything in moderation, and has successfully avoided putting the weight back on.

Funnily enough, fans often congratulate Austin on his weight loss, and tell him he looks just like that guy from “Pawn Stars” – to which Austin replies: “Trust me, if I were going to pretend to be someone, it wouldn’t be that guy from ‘Pawn Stars’.”

Although “Pawn Stars” has seen its fair share of controversy in the past decade or so, season 21 began airing in October 2022, with the series remaining as popular as ever.