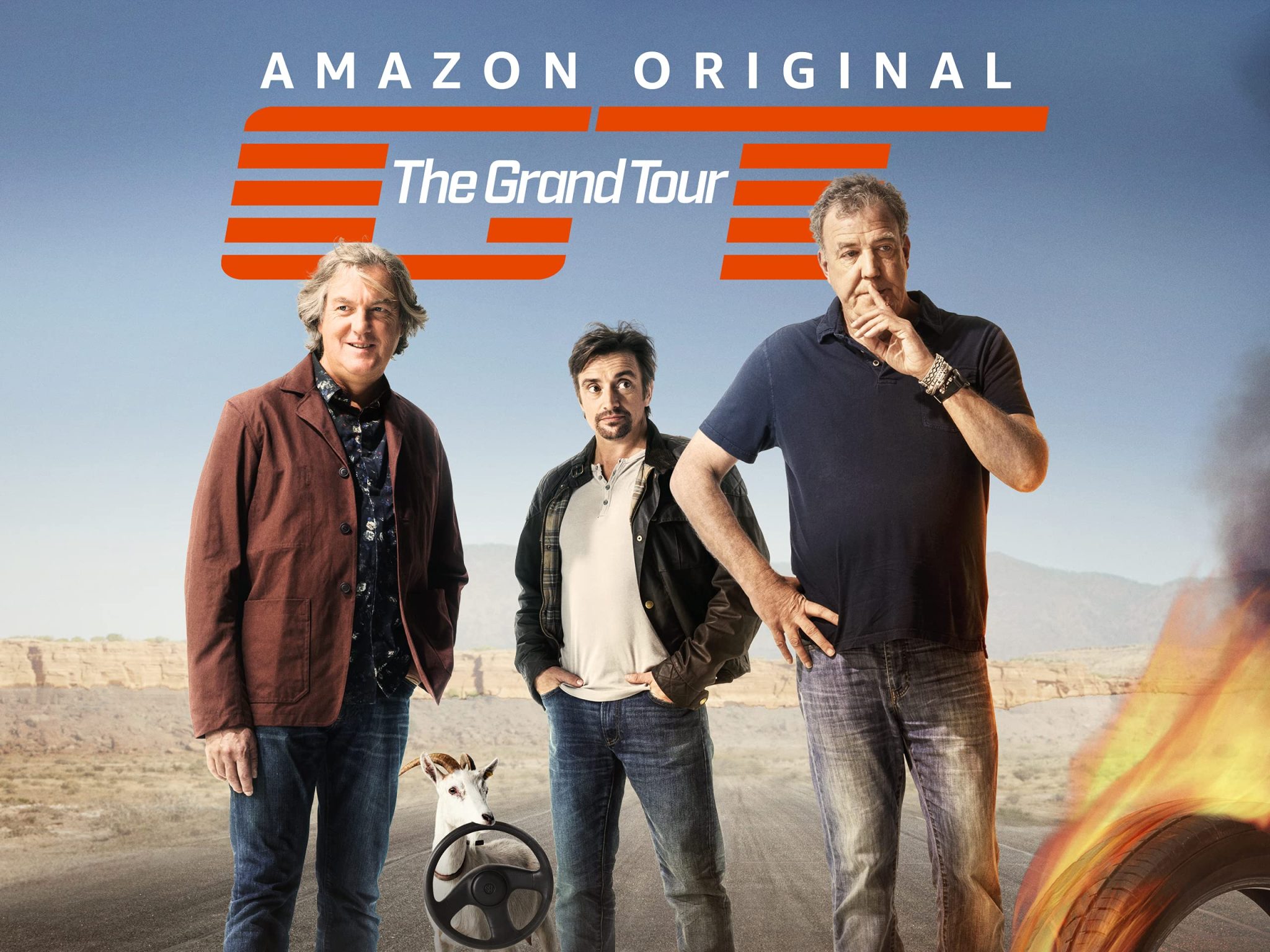 The Sickest Custom Rides From The Grand Tour

What is “The Grand Tour”?

“The Grand Tour” (TGT) is a British TV series that follows all things motors. Created by Jeremy Clarkson, Richard Hammond, Andy Wilman and James May for Amazon’s streaming service, Amazon Prime Video, born when the four creators left BBC’s “Top Gear”. It premiered in November 2016, and the original contract was for 36 episodes spread out over three years.

Between 2016 and 2019, TGT and “Top Gear” shared a similar format, with studio segments, motoring challenges and races, car reviews, and celebrity guests. During this time, the team’s studio was based in a large tent which, during the first season, was situated in differing locations around the world until the crew set down in the English Cotswolds. The format changed when season three ended; episode releases became more sporadic, and the focus shifted towards producing motoring films, perhaps in an effort to distance itself from the iconic “Top Gear” brand.

Since its first episode, TGT has seen positive viewing figures and reviews. In January 2019, “The Grand Tour Game”, a videogame based on the show, was released.

Jeremy, James, and Richard have been known for their whacky custom cars since “Top Gear”, and of course kept up with tradition after switching to the new show. When Jeremy and a “Top Gear” producer got into a physical altercation, it didn’t take long for Amazon to make the TV stars an offer they couldn’t refuse, and fans were soon blessed with TGT.

One of the most memorable custom rides on TGT is Jeremy’s V-8-Powered Beach Buggy which the trio used to travel around Namibia, journeying through the famous Namib desert. The beach buggy journey’s starting point was where the desert met the South Atlantic Ocean, and was featured in the show’s first Special episode.

Next on the list is the RV that James and the other hosts went on a US camping trip in. Initially, the humorous trio hired a standard RV – but soon got bored with it and replaced it with their own version. The RV came with its own pub, dart boards, and wall posters and looked like something straight out of a quaint British village.

In episode four of season one, the hosts built a car using sustainable materials on a Land Rover Discovery chassis. The eclectic vehicle was named “The Tree-T-I”; shrubs, flowers, bamboo, and plants were used for the car’s outer body, with the highlight of the episode being the adorable hedgehog that hopped in to join Jeremy and the rest.

Another episode saw Jeremy make his own version of a modern SUV. Again using the chassis and underpinnings of a Land Rover Discovery, and the outer body of a 1978 MGB Roadster, the results were decidedly underwhelming. He decided to switch the MGB out for a 1980s Mercedes-Benz SL, and named his creation “The Excellent”, despite his colleagues being less than impressed.

In another challenge, the crew aimed to break a speed record by merging a Suzuki Jimny, a small boat, and a Maritime patrol aircraft’s jet engine. When their first attempt failed, they doubled down and got a Bond Bug, replacing the wheels with retractable ones and adding a jet-ski engine. The vehicle was practical and aesthetically pleasing – and broke the speed record.

Always thinking outside the box, Jeremy transformed a Bentley Continental GT for his Madagascar travels. The vehicle was virtually unrecognizable, with bigger tires, Golf GTI brakes, rally lights, skid plates, motorcycle headlamps, snorkels, an external roll cage, and rally lights on top – and we haven’t even named all the modifications.

Born in April 1960, Jeremy Charles Robert Clarkson is a quintessentially English farmer, journalist, broadcaster, writer and game show host, who specializes in motoring. His current gigs include writing weekly columns for “The Sun” and “The Sunday Times” when not busy filming for TGT. Previously, he hosted “Who Wants to Be a Millionaire?”, English ITV’s most popular game show.

Jeremy was brought up alongside his sister Joanna by Shirley Gabrielle Clarkson, who worked as a teacher and passed away aged 80 in 2014, and Edward Grenville Clarkson, a travelling salesman who passed away 20 years before his wife. When Jeremy was a child, his parents put his name on private school waiting lists, despite being unable to pay the fees. Luckily, shortly before he was admitted aged 13, they began selling Paddington Bear stuffed toys through their tea cozies business.

As Edward and Shirley were infringing intellectual property rights by selling the toys, Michael Bond, the creator of Paddington Bear, took legal action. Edward met Michael’s lawyer in London and coincided with Michael in the lift on the way to the meeting. Thanks to their immediate rapport, Michael gave the Clarksons worldwide licensing rights to sell the bear toys – and miraculously, Jeremy’s parents were able to pay for their son to attend three private schools.

Sadly, Jeremy was severely bullied while studying at Repton School. From being made to lick the toilets clean to being beaten up in the middle of the night, his classmates’ savage behavior led to Jeremy contemplating suicide. The future celebrity was later expelled for drinking, smoking and other offences, leaving with one C and two fail grades at A level. Coincidentally, Andy Wilman also attended Repton.

After a few years in the TV industry, Jeremy landed his first major role in October 1988, with help from Jon Bentley, a “Top Gear” researcher who would become the show’s producer. Standing out thanks to his humorous personality and irreverent ways, Jeremy hosted “Top Gear” until 1999 and would later present its newest format from 2002 to 2005.

“Top Gear” soon became BBC Two’s most-watched show, and was rebroadcast to over 100 countries worldwide. In 2012, Jeremy’s company – which handled the show’s international distribution and merchandise – earned over $150 million, until BBC Worldwide gained full control of the program’s rights.

Over the years, Jeremy’s behavior on the motoring show was denounced not only by viewers and members of the public, but by car companies and national governments. The first incident occurred in 2004, when he drove into, and damaged, a decades-old horse-chestnut tree in Somerset while test driving a Toyota Hilux. The BBC apologized publicly, and paid the local parish council £250.

A mere year later, Jeremy performed a mock Nazi salute and referenced Hitler’s regime on air. In 2008, over 500 viewers complained to the BBC after the presenter crudely joked about lorry drivers murdering prostitutes. Chris Mole, the MP for Ipswich – where several prostitutes were murdered just two years earlier – wrote to Mark Thompson, the BBC Director-General, demanding that they dismiss Jeremy.

The BBC defended Jeremy on that occasion, and also looked the other way when the presenter angered gay rights campaigners in 2012, and mocked Indian culture during a “Top Gear” Christmas 2013 special, but they reportedly gave the controversial celebrity a final warning in May 2014 when English tabloids published a clip of him saying the N-word. The last straw, however, had nothing to do with racist or otherwise offensive remarks.

The BBC suspended Jeremy from “Top Gear” in March 2015 following his physical altercation with Oisin Tymon, a producer of the show. While filming in North Yorkshire, Jeremy was offered soup and cold meat instead of the steak he’d ordered, as the hotel chef had gone home. Jeremy punched Oisin and allegedly insulted him; Oisin was later treated in hospital, and the BBC announced that the remaining two episodes of the season probably wouldn’t be broadcast.

At the end of March, Jeremy’s contract with the BBC expired. The three-year renewal previously proposed by the network was unceremoniously withdrawn; however, a fan petition that started on March 10th and aimed to reverse the BBC’s decision reached a million signatures in just ten days. The petition was started by and personally delivered to BBC headquarters by a blogger named Guido Fawkes.

However, the BBC refused to back down, and officially confirmed on March 25th that they would not be renewing Jeremy’s contract. Oisin stated that he didn’t wish to press charges against the presenter, while Jeremy asked the show’s fans to stop trolling the producer on social media. Tony Hall, the BBC Director-General, was also sent numerous death threats which were investigated by the British police.

In what cynics claimed was an attempt to sway public opinion, Jeremy revealed in April 2015 that a possible tongue cancer scare was the reason behind his tussle with Oisin. He also shared that he was planning a new motoring show.

Despite not wanting to press charges at first, Oisin hit Jeremy and the BBC with a racial discrimination lawsuit in November 2015. Four months later, Jeremy paid the six-figure racial discrimination and personal injury claim, and formally apologized. Naysayers criticized Oisin for suing Jeremy shortly after the latter announced he’d be presenting a new show on Amazon Prime Video.

Born in December 1969, Richard Hammond is arguably the second-biggest celebrity to come from the “Top Gear” franchise. He and his two younger brothers were born in Warwickshire, with the family relocating to Ripon, North Yorkshire, in the mid-1980s. From three to seven years old, Richard studied at Blossomfield Infant School, and later at Ripon Grammar School and Harrogate College of Art and Technology.

After an unglamorous first job shoveling grit into a water filtration plant, Richard’s career path drastically changed as he worked for Radio Leeds, Radio Cumbria, Radio York, and other BBC radio stations. While presenting for Radio Lancashire, one of his regular guests was Zogg Ziegler, a motoring journalist who encouraged Richard to start doing motoring reviews on TV. This led to Richard auditioning for “Top Gear”, which would change his professional trajectory forever.

Richard joined “Top Gear” in 2002, and was soon nicknamed “The Hamster” due to his small stature. After a high-speed dragster crash while filming in September 2006 that made international headlines, Richard returned to the show a few months later, and was greeted by fireworks, dancing girls, and other festivities. The presenter’s contract with the BBC expired on 31st March 2015, and he decided not to return to the show when Jeremy was dismissed by the network.

Richard’s personal life is well-documented, as he is married to the Daily Express columnist Amanda Hammond; their daughters, Isabella and Willow, were born in 2001 and 2004 respectively. The presenter is a staunch animal lover who owns ducks, sheep, dogs, horses, cats, and even a peacock, which he keeps on a farm. The celebrity is also a helicopter owner, as he passed his B206 LST license in March 2012, and bought a Robinson R44 Raven II.

Fans were shocked to learn that Richard, Amanda, and Willow were burgled in Saint-Tropez while sleeping at a holiday villa. Amanda was the one who shared the news, and speculated that the burglars used noxious gas to render them unconscious. The culprits were never found.

The millions Richard has earned on “Top Gear” have helped him considerably upgrade his lifestyle. He and his wife and daughters have an apartment in London, but live in a mock castle in Herefordshire. The presenter loves country life so much that he moved from Gloucestershire to Buckinghamshire and back again, and mainly uses his London apartment for work purposes. He’s also rumored to own property in the sleepy town of Wantage, Oxfordshire.

The keen motorcyclist and car fanatic has an impressive collection of vehicles, with the oldest being a 1931 Lagonda 2-litre Supercharged. Some of these cars, such as his 1971 Buick Riviera, have featured in episodes of TGT, while the 1963 Opel Kadett and others were first seen on “Top Gear”. He is currently restoring a valuable Jaguar XK120.

Richard has done his fair share of good deeds, and is an ambassador of The Children’s Trust, a UK charity that supports children with neuro-disabilities and brain injuries. In September 2013, the presenter made a terminally-ill child’s day when he drove her around in a pink Lamborghini Aventador, and flew her in his helicopter; the heartwarming event was organized by the charity Rays of Sunshine.