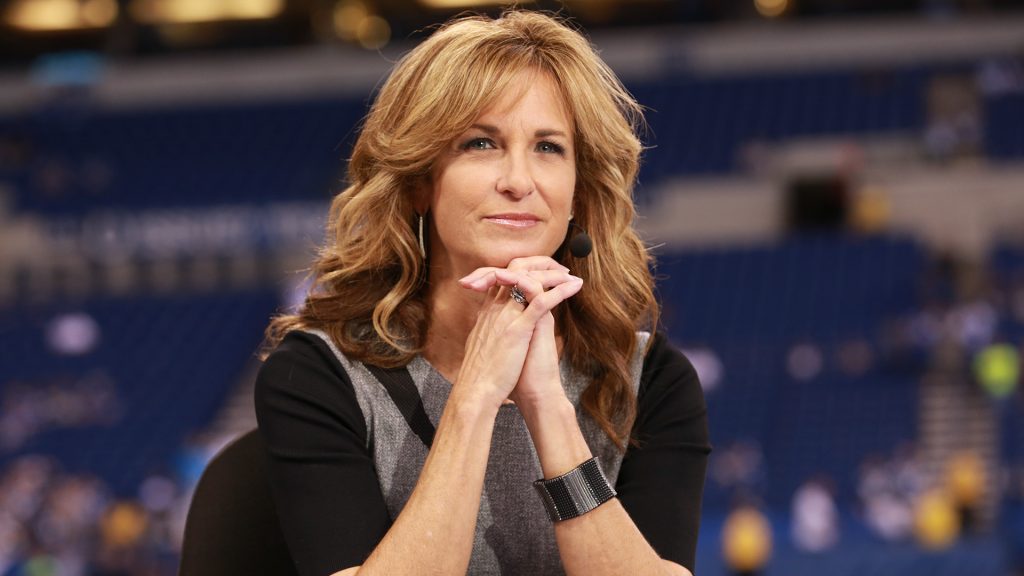 American reporter and anchor Suzanne Lisa ‘Suzy’ Kolber was born on 14 May 1964, in Philadelphia, Pennsylvania, USA, where she was raised in a traditional Jewish household by her mother Sandra Kolber and father Gene Kolber. She was enrolled at Sandy Run Middle School located in Dresher, Pennsylvania, and when Suzy was ten years old, she claimed a spot on their football team, but had to quit due to her parents’ unhappiness regarding the situation. She matriculated from Pennsylvania’s Upper Dublin High School in 1982, before studying for a Bachelor of Arts degree in telecommunications at the University of Miami, graduating in 1986.

Suzy is best known for being an ESPN co-producer, sideline reporter, and sportscaster.

Between 1984 and 1986, while she was still studying, Suzy worked as a sports director in Coral Gables, Florida at Dynamic Cable. She was also on her university’s water ski team. After graduating in 1986, she worked as a videotape co-ordinator at CBS Sports in New York City.

Suzy produced Miami’s WTVJ-TV afternoon sportscast from 1985 to 1989. In 1988, the show won a Sports Emmy. Remaining in Miami, she freelanced for WPLG-TV as a specials producer. From 1988 to 1990 she produced the magazine show in Miami, Florida “Greyhound Racing America” and from 1990 to 1991 she produced another magazine show, this time in Irving, Texas, entitled “Cowboys Special Edition.” Her freelance assignments in 1991 included work as a sports specials producer in Miami for WCIX-TV; a producer and reporter in Greenwich, Connecticut for Breeders’ Cup Newsfeed; a director and producer for NFL Films and as a field producer in New York City for Inside Edition. From December 1991 to 1993 she worked as a weekday feature reporter and weekend sports anchor in West Palm Beach, Florida at WPEC-TV, then transferred to ESPN in 1993.

When ESPN2 originally launched on 1 October 1993, Suzy was one of their first anchors on “SportsNight.” In 1995 and the following year, she was a reporter on “College Game Day,” a co-host of the X Games, and an anchor on “SportsCenter.” She also hosted “SportsFigures,” which teaches physics and math, using analogies of sports celebrities.

She left them three years later in favor of a job at Fox Sports, however, in late 1999, she returned to ESPN where she remains to this day. Throughout her career so far, Suzy has covered a range of assignments from Grand Slam tennis tournaments to the 1996 ESPN X Games bicycle-stunt events, and National Football League games – she hosted the “NFL Matchup” during the 1999 to 2003 NFL seasons.

On 20 December 2003, Suzy was covering the Jets game in New York and interviewing retired Jets quarterback Joe Namath. Twice in their interview, Joe said he wanted to kiss Suzy, and that he, ‘couldn’t care less about the team strugg-a-ling.’ Suzy was courteous and replied, ‘Thanks, Joe. I’ll take that as a huge compliment.’ After the event and backlash, Joe apologized for his comments, and said it was due to his intoxication, and followed his apology by entering an outpatient program to help people suffering from alcoholism. When he felt better, Joe published a book entitled “Namath” that explored his struggles with alcohol addiction, and in which he recalled how embarrassed he felt when he watched the interview – that has helped him maintain his sobriety.

In a 2013 interview, Suzy expressed that she believed Joe wasn’t a bad person, he just did a bad thing, ‘And that turned out to be the silver lining of his life.’ The following day, almost everybody wanted an interview with her to ask about the situation, but ‘… I just sort of rolled my eyes and thought, ‘That’s the end of that…’ we laughed about it.’

Iconic stadium meets stylish brand! Awesome to be at Lambeau Field with the Hall of Famers!#WHBM #LambeauField pic.twitter.com/ZrIYYKwF5q

From 2001 to 2005, she worked on “ESPN’s Sunday Night Football”, and in 2004 she was added to Sports Business Daily’s 10 favorite sports television personalities list for the past decade. From 2004 to 2006, she led the analysis segment on day one, and hosted the day two telecast of the annual NFL Draft. That time period also saw Suzy being a studio and on-site anchor for the French Open tennis, and as a SportsCenter anchor during the NFL off-season. 2006 marked the inaugural year “Monday Night Football” (MNF) chose new members of the show; Suzy got a position there. Her hard work brought forth an increase in viewership, and “MNF” became cable television’s most-watched program. From 2006 to 2009 she hosted the on-site and studio shows at Wimbledon.

Suzy and fellow sportscaster Michele Tafoya work together as sideline reporters on ESPN’s “Monday Night Football”, and in 2006, Suzy and Michele co-hosted the Super Bowl XL pre-game show in Detroit for ABC Sports. Suzy co-hosted the Summer X Games and Winter X Games in Aspen, having previously hosted them in 1996, 2000 and 2001. That year, Suzy became the first female to be awarded the Maxwell Club Sports Broadcaster. She hosted the “NASCAR Countdown” pre-race program in 2007 – Brent Musburger was the usual lead host, but he was absent during the week of the race, who gave no explanation for not being there, but did announce Suzy as his replacement on the Busch Series and Nextel Cup studio programming. When she left there, Allen Bestwick replaced her. Suzy regularly hosts “NFL Live,” ESPN’s year-round information and news show.

Suzy interviewed Mark Ingram Jr. while reporting on the 2011 NFL Draft – her interview was criticized as Suzy read an email that Mark’s imprisoned father sent, and which caused him to cry. Viewers felt that the interview and her decision to read the email aloud was manipulative.

On 13 September 2011, Suzy and Chris Mortensen’s debut ESPN2 show together, “NFL32” was released. The backdrop behind the pair was designed to look like a sports bar, they even added dark woodwork, sports memorabilia, and wainscoting. Their show recaps that day’s events from all 32 NFL teams.

At the end of the 2010-2011 NFL Season, Michele moved from ESPN to NBC Sports, meaning that she no longer co-hosted “Monday Night Football” with Suzy. ESPN then switched to a rotating system, with solo sideline reporters such as Ed Werder, Rachel Nicholas, and Wendi Nix – Suzy acted as a fill-in so she could mainly work in the studio. After her request to do less on-site work, “NFL32” changed to “NFL Insiders.” Lisa Salters then took over as the sideline reporter for the show from the 2012-2013 NFL season – both Suzy and Lisa are producers for “MNF.” For the 2014 NFL season, she stood in for Stuart Scott, who was sick at the time; on 4 January 2015, he sadly passed away. Following his death, Suzy permanently took over as “Monday Night Countdown”’s on-site host for the 2015 NFL season.

Great to be in Nashville! #WHBM pic.twitter.com/PwllBNHqy9

In November 1996, Suzy left ESPN and took up a position at Fox Sports, where she was the anchor on “Fox Sports News,” broadcast on their Fox Sports Net channel. Suzy was also the lead anchor on “NFL on Fox.” During a 1998 NFL game, John Madden and Pat Summerall joined her as co-hosts. She was also the studio host for “NHL on Fox,” and covered the 1999 Stanley Cup Play-offs and Finals.

In March 1999, Suzy and Maury Povich co-hosted “Opening the Lost Tombs: Live from Egypt,” a non-sports archaeological show that unveiled ‘five-thousand year-old mysteries.’ Fox was the first production to showcase a live excavation on Egypt’s ancient Giza plateau, and during excavations, Suzy was live-reporting from the tomb. In August 1999, she returned to ESPN.

“ESPN NFL Football,” was a video game created by Sega and made available for Sony’s PlayStation 2 and Microsoft’s Xbox. In the game, Suzy’s narration of football broadcasts was featured. She has also appeared in American commercials for Pepsi-Cola and Chevrolet.

PlayStation released “ESPN Extreme Games” in 1995 – Suzy lent her voice to hint at secret areas, introduce levels and hype the player up. “1Xtreme,” the re-release of the game, had Suzy’s voice and videos removed, as were all references to ESPN.

Suzy met Eric Brady in 2005 – reportedly at a sports event. The happy couple married in 2008 in an intimate ceremony, and Suzy gave birth to their only child, a daughter named Kellyn Brady, that same year. She asked ESPN for the on-site to studio change because Suzy wanted to spend more time with Kellyn, which resulted in ESPN creating “NFL32” in September 2011. There were rumors in 2008 that Suzy would be a single mother, but she quickly denied those claims, and confirmed that she is still with Eric. The family is very private, but Eric and Suzy appear to be happily married.

On 17 July 2013, an IndyStar interview with Suzy was published. When asked how long it took for her to be taken seriously in the business – as a woman – she answered that when her intern work began in 1985, she would often be the only female in the room, but nevertheless, ‘My whole life has been about a love of sports and competing and playing and I never felt like I was any different or outcast.” The interviewer was shocked that Suzy never felt disrespected, even by Joe or after the incident, ‘I wanted it to go away,’ she said, ‘for Joe and for me,’ Suzy added.

In 2022, people on Twitter were comparing old and new photos of Suzy, and suspected that she’d had plastic surgery on her face during the off-season so it would be less obvious. Suzy is yet to comment on these claims.

Suzy does her best to empower fellow women. With sports including reporting being such a male-dominated industry, she wants to encourage women to follow their dreams, and not back down on account of being intimidated.

She donates money to charitable events, and mentors up-and-coming anchors and journalists. Suzy’s advice is to always be respectful and knowledgeable about your job tasks in order to succeed.

As of August 2022, Suzy’s net worth is estimated at $18 million, which is a surprisingly big number. This figure was worked out after her annual salary now averages $3 million. Suzy is one of the highest-paid anchors in sports.