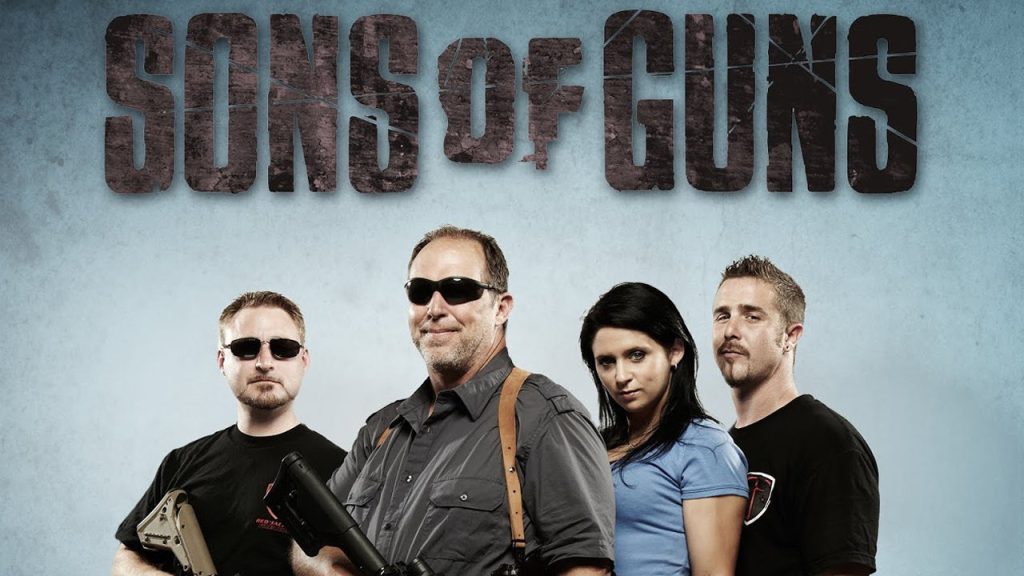 ‘Sons of Guns’ Will Hayden Sentenced to Life In Prison

Fans of the multi-national pay television network Discovery Channel, probably came across the popular reality show “Sons of Guns”, which aired between 2011 and 2014. It follows the company Red Jacket Firearms LLC, which manufactures and sells firearms to private collectors, security companies and law enforcement. The owner of the business was William ‘Will’ Hayden, his daughter Stephanie was his business partner, and the show also starred Joseph Meaux and Kristafor ‘Kris’ Ford. Each episode of “Sons of Guns” followed one of the main cast members trying out various weapons, similar to the Australian-American science entertainment show “MythBusters” – Will warned viewers before every episode not to try anything similar at home.

The show aired 68 episodes and received mostly positive reviews, however, it was cancelled on 27 August 2014, after Will was arrested on rape charges.

Discovery Channel has stopped all distribution of the series, and it’s highly unlikely that any similar series is going to be made.

Will was arrested on 11 August 2014, and charged with aggravated crimes against nature and molestation of a juvenile. A 12 years old girl had accused him of raping her, while Will defended himself by claiming that this was made up by the girl’s mother, and that she was a former girlfriend of his who wanted revenge.

As soon as he was charged, no TV producers wanted to work with him anymore, and Will was also accused of aggravated rape by his daughter who was 26 at that time, and who claimed that he’d raped her when she was 12. Bail for Will was initially set at $200,000, but after his daughter’s accusations, it became $350,000. Will pleaded not guilty to the charges in January 2015, and his three private lawyers requested and were relieved in August 2015; they stated that there were no hard feelings between them and Will, but that their confidential conditions hadn’t been met. Will’s defense was then handled by a public defender.

He was convicted of one count of forcible rape, and two counts of aggravated rape on 7 April 2017, and was on 11 May 2017 given two life sentences plus 40 years behind bars. He received a third life sentence on 12 July 2017, when he was convicted by Livingston Parish Judge Robert Morrison of another count of rape.

Will is possibly looking at spending the remainder of his life in jail, because the judge hasn’t made him eligible for suspension of sentence, probation nor parole. He’s today locked away in Louisiana State Penitentiary.

William Michale Hayden was born in Baton Rouge, Louisiana USA, on 24 June 1965 – his zodiac sign is Cancer, he holds American nationality, and is of Choctaw (Native American people) descent. He has worked various jobs, and while people today mostly know him for being a convicted child molester, he’s also known as a former gun shop owner, TV personality, gunsmith, and a former US Marine.

He was raised in Baton Rouge by his parents, but about whom nothing’s known, as Will respects their privacy; because he hasn’t spoken of having any siblings, most people on the internet believe that Will is an only child. He was three or four years old when his house caught fire, and has stated how he still remembers ‘waking up to fire ‘eating me up’… burning the bed… the sheets… the room’. In the book “Sons of Guns: Straight-Shootin’ Stories from the Star of the Hit Discovery Series”, which he co-wrote with Adam Rocke and published on 11 March 2014, Will revealed that he was abused by his father when he was younger, starting from when he was five years old. His father once punched him through a wall, and Will has explained that it was around that time that he learned to pick his battles carefully, and that every time he managed to avoid being beaten up by his father was a victory for him.

He was 12 years old when he learned how to build firearms, and upon matriculating from a local high school in 1983, Will enlisted in the Marines, serving for the following six years, and reaching the rank of sergeant. Upon discharging in 1989, he founded his own company working in construction and refrigeration, while still building firearms as a hobby and side job.

After 10 years, Will realized that he had more customers for his firearms than he could handle, and thus sold his company and invested all of his money into Red Jacket Firearms LLC. The motivation for the company’s name comes from Will’s mother Osguma, whose name in Choctaw means ‘red jacket’. Not long after the company was founded, Will was contacted by the CEO of the large distributing firm Manotick Firearms, who wanted him to make 20 rifles.

In the following decade, Will made a name for himself for making firearms, and after producers working for the Discovery Channel found out about him, they offered him a chance to star in his own show, which went on to be “Sons of Guns”.

Even though Will has been in prison for the past five years, his net worth still stands at close to $2 million.

Will married Rachel Hayden sometime in the ‘80s, and she gave birth to their daughter Stephanie in 1986; Stephanie was an important part of the show “Sons of Guns”, and she and her father seemed to be in good relations. However, after he was accused of rape in 2014, Stephanie claimed that he had also raped her back in 1998.

Will’s wife Rachel is today living at their house in the Greenwell Springs area of Central Louisiana, and not a lot about her is known. It’s believed that she’s a psychologist and artist, and that she’s still today married to Will. It’s also said that they have another daughter together, but all details concerning her have been kept away from the media’s attention, including the girl’s name and birthdate.

His other TV appearances

In 2014, Will was featured in an episode of the news talk-show “Fox and Friends”, as they covered his trial.

The show has been airing since 1998, numbers nearly 4,000 episodes, and is today hosted by Steve Doocy and Brian Kilmeade.

Will also launched his acting career in 2014, with his portrayal of Main Gunman in the action thriller movie “The Outsider”, written and directed by Brian A. Miller, and which starred Craig Fairbrass, James Caan and Jason Patric. It follows Lex Walker, a British military contractor who has come to Los Angeles, California because he’s been told that his daughter has died, but has discovered that the body isn’t his daughter’s. The movie received mixed reviews; Will has no other acting credits.

Stephanie led a rather normal life until she was raped by her father when she was 12, but hasn’t spoken about how she handled it, if she had told her mother or not, and how her life had changed afterwards.

She hasn’t shared the details of her education with the public, but it’s believed that Stephanie matriculated from a local high school in Baton Rouge in 2004, and then didn’t enroll at college, but started working in her father’s company Red Jacket Firearms LLC.

Sometime in the second half of the 2000s, she married her first husband William Scott, a non-celebrity American, and gave birth to their son, but divorced not long after that, for unknown reasons. She met her future second husband Kris Ford when he started working at her father’s company, and they exchanged vows in 2011 in a large ceremony attended by many of their friends and family members. They now have two children together.

Stephanie and Kris have had their share of problems with the authorities, and were a couple of years ago arrested for child assault. Kris was apparently angry with Stephanie’s son who was nine years old at that time, and hit him with his belt; Stephanie was also arrested because she was in the same room, but failed to stand in the boy’s defense.

Stephanie has been staying away from the media’s attention since her father was charged with rape in 2014; her net worth is estimated to be close to $2 million.

Other celebrities charged with child rape

In 2019, the popular American singer-songwriter Robert Sylvester ‘R.’ Kelly was charged on nine counts of aggravated criminal sexual misconduct, involving girls aged between 13 and 16. His trial began on 18 August 2021, he was found guilty on 27 September 2021, and will remain in custody until 4 May 2022, when he’ll be sentenced. He was also charged with child pornography and statutory rape back in 2002, after a video was leaked onto the internet, featuring R. Kelly urinating on an underage girl and having sex with her; he was found not guilty six years later.

The British former glam rock singer Gary Glitter was arrested on 28 October 2012, after it was reported that he had committed sexual offences against two girls aged between 12 and 14.

He was released on bail, but on 5 June 2014 was charged with eight counts of sexual offences. By the time he appeared at Southwark Crown Court on 19 January 2015, he had been accused of two sexual offences, one attempted rape and seven counts of indecent assault; Gary was convicted on a total of six counts on 5 February 2015, and was sentenced to spend 16 years behind bars.

The Polish and French film director Roman Polanski was arrested on 11 March 1977 at the Beverly Wilshire Hotel, after he had allegedly sexually assaulted the 13-year-old Samantha Gailey. He was charged with six counts of criminal activities, including rape, and made a deal to admit that he had ‘unlawful sexual intercourse with a minor’, and that all other charges would be dropped. Roman then learned that the judge wanted to send him to jail for 50 years, and he thus fled from the USA to France, where French law has since protected him from being extradited to the US.

Disney’s director of music publishing, Jon Heely, was in December 2017 charged with three counts of child sexual abuse, which he had allegedly committed a decade earlier. Jon pleaded not guilty, but if he’s convicted, will likely face close to 10 years in prison.

The famous American video game designer Jess A. Cliffe, perhaps known best for having co-created the game “Counter Strike”, was arrested on 2 February 2018 for sexual exploitation of a minor. He had paid a 16 years old girl to have sex with him, and then videotaped them without her approval; no verdict has yet been declared.

Drew Drechsel is an American Ninja Warrior Champion and gym owner, who was arrested in August 2020 for having tried to convince a minor to have sex with him. Authorities have reported that he had flown to New Jersey to have sex with the girl back in 2015, when she was 14 years old, and that this had happened a couple of more times by 2019. Drew was charged with manufacturing child pornography, travelling with the intent to engage in illicit sexual conduct with a minor, and enticement of a minor to travel for illicit sexual conduct. His trial is yet to begin.