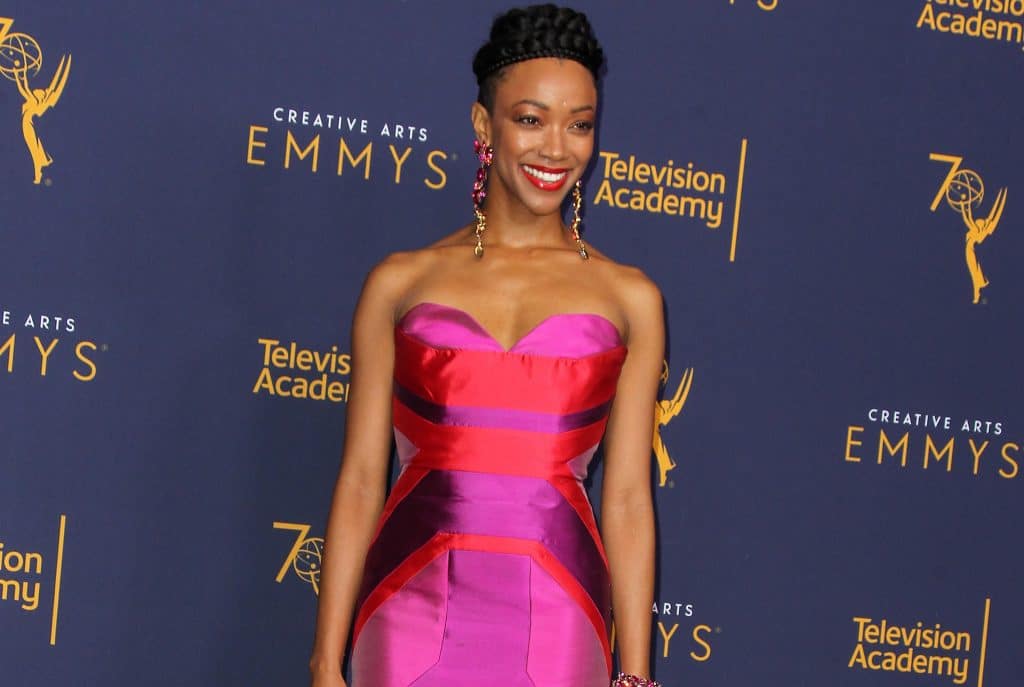 Sonequa Martin-Green is an American television and film actress, perhaps most popular for her roles in “Star Trek: Discovery” as Michael Burnham, as well as in “The Walking Dead” as Sasha Williams.

Sonequa Chaunténée Martin was born on the 21st March 1985, in Russellville, Alabama, USA, to Charles Winston Martin and Vera Lynn Martin-Moore, the younger of two daughters. Her parents divorced when she was still young, and both eventually married other partners, and as a result, she has three half-sisters from her father’s side.

Growing up in Russellville, she had a relatively normal childhood, and planned to make a career as a psychologist. It wasn’t until her 10th grade theater rehearsal that she decided to pursue acting instead. She recalls, ‘I thought I was going to be a psychologist, which is interesting because it’s very similar to acting. I was fascinated with human behavior and why people do what they do. I was in the middle of rehearsal in 10th grade when I had this epiphany’. Subsequently, Sonequa matriculated from high school, and enrolled at the University of Alabama in pursuit of a theater degree, which she gained in 2007.

The aspiring actress began her career while she was still in university, with a role in the film “Not Quite Right”. She also appeared in many theater productions up until her graduation, after which she relocated to Los Angeles to further pursue her career. She appeared in the films “I-Can-D” and “Blind Thoughts” before her television show debut in 2008 in “Law & Order: Criminal Intent”. The following year saw her in the films “Toe to Toe” and “Rivers Wash Over Me”, as well as recurring roles in the television shows “Army Wives” and “The Good Wife”.

She went on to appear in the films “Da Brick”, “Yelling to the Sky”, “Shockwave”, “Darkside”, and had recurring roles in “Gossip Girl” and “NYC 22”. She then earned her most popular role in 2012, in “The Walking Dead” as Sasha Williams, appearing in 45 episodes of the series.

The following years saw her appear in shows including “Once Upon a Time”, “New Girl” and “Penn Zero: Part-Time Hero”. In 2017, she earned another popular role in “Star Trek: Discovery”, appearing in 42 episodes and counting. She’s also appeared as herself in “Lip Sync Battle”, “After Trek” and “The Ready Room”, and lent her voice to the video games “Fast & Furious Crossroads” and “Star Trek Online”. Her most recent roles have been in the films “The Outside Story”, “Space Jam: A New Legacy”, and a voice role in the show “Invincible”.

Sonequa first met fellow actor Kenric Green at the McCarter Theater in New Jersey while they were acting in “Fetch Clay, Make Man”. The pair began dating, before moving to New York together to support each other’s careers. They eventually tied the knot in an intimate ceremony on the 4th December 2010. About five years later the couple was blessed with their first child, a son named after his father as Kenric Justin Green II. After another five years, the couple welcomed their second child, a daughter named Saraiyah Chaunté Green, who has her mother’s initials as well as her middle name. Sonequa revealed on her Instagram page that both her children were home births. She said, ‘… now both of our children have been born in the water. We never felt that anything was missing, but now that she’s here, we feel a perfect sense of completeness… Thanks be to Yeshua, she’s the final piece to our Love-given puzzle’.

The couple have been married for almost 12 years, but don’t shy away from professing their love for each other on the internet. In an October 2020 interview with Wired, the actress spoke lovingly of her husband, saying, ‘That is a hunk of a man, love of my life: Kenric’. Her husband also regularly posts pictures of his wife and him with sweet captions; he also posts about projects she’s working on. For her  birthday in 2022, Kenric posted a picture of his wife with the caption, ‘This is my wife. Her name is Sonequa. She is my everything…’.

Kenric Green was born other 30th March 1982, in South Carolina, USA. Not much is known concerning his early years, education background and family history, except that he attended Mt. San Antonio College. He made his acting debut in 2006 in the film “They’re Just My Friends”, followed by “Helen at Risk” and “Let Me Go”. He made his television show debut in 2012 in “Evil I”, followed by “Just Divorced” and roles in the films “Victoriana” and “On The Bridge”.

One of Sonequa’s idols, the late Nichelle Nichols, spent her time after starring in “Star Trek” in advocating for girls and women of color to take up STEM— science, technology, engineering and mathematics fields; in particular, she encouraged them to apply for astronaut positions at NASA. Sonequa was inspired by the actress-turned-advocate, saying, ‘… She’s very much 1,000% actually a hero’.

Following in the footsteps of her idol, Sonequa also ventured into STEM by partnering with Million Girls Moonshot, a non-governmental organization that strives to provide opportunities for a million girls to pursue STEM programs. The organization dedicated $100,000 to send 16 girls on an all expense paid trip to Space Camp for a week. The first group of girls were presented with ceremonial stars labelled with each of their names, and they also received a surprise from the actress, who recalled, ‘ I was so excited for them to see my face and see my love and support for them. I really hope this is an experience that they carry with them, something that they always remember. I hope it sets them on their path’. After Nichelle’s death in 2022, Sonequa hopes to continue her idol’s legacy saying, ‘I know she said when she was still here, ‘If I’ve inspired you at all, I just ask that you continue this legacy’. ‘.

Sonequa’s net worth and salary is mainly derived from her career as an actress. Authoritative sources cite her net worth to be over $4 million, while her husband is worth close to $1.5 million.