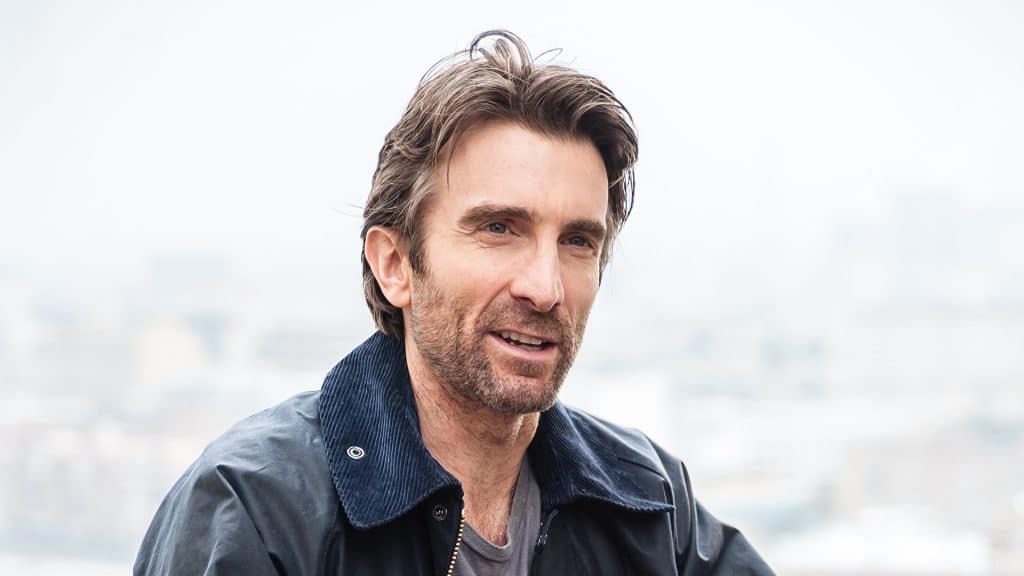 Actor Sharlto Copley was born on 27 November 1973 in Pretoria, South Africa, making him a Sagittarius. He attended St. Andrew’s Preparatory School in Grahamstown and Redhill School in Morningside. He has a brother named Donovan who is the lead singer of Hot Water, a band based in Cape Town, South Africa. Their father, Dr. Bruce Copley used to be a university professor, but their mother, Lina Stocks’ profession is unknown.

Sharlto’s wife Tanit Phoenix was born on 24 September 1980 in Durban, KwaZulu-Natal, South Africa. She is a make-up artist, lingerie and swimwear model, and an actress perhaps best known for her role as Lilith in “Femme Fatales” and as Eve Wilson in the “Spud” movie series. She’s appeared in the pages of the 2003 “Sports Illustrated Swimsuit Issue,” “FHM” and “GQ magazine.”

Tanit began dancing ballet from the age of five, and continued for the following 15 years. Her career started when she was only 14 years old after a modeling scout discovered her in Westville, Durban. She started out as a commercial model before moving on to acting, and then became a make-up artist by 2013. She was the mastermind behind Sharlto’s character, Jimmy in “Hardcore Henry”, the main designer and make-up artist who turned her husband into 11 different characters.

It appears that since 2013, Tanit has shifted careers and is now a stay-at-home mom. She posts about her vegan journey on her social media too, so it can be assumed that both Sharlto and Sielle may also be vegan.

While in his early 20s, Sharlto met Neill Blomkamp, an animator and high school student at Redhill School. Despite their age difference, the pair quickly became friends. Neill would use the computers at Sharlto’s work to help create 3D animations and designs for company pitches. Neill’s real passion was in filmmaking and so is Sharlto’s; which is why they decided to pursue their dreams together. In 2006, Sharlto appeared in “Alive in Joburg” which was directed by Neill, and the same year, he also played a soldier in the short film “Yellow,” directed by Alfredo De Villa and set in New York.

On 28 August 2009, the film “District 9” was released, directed by Neill Blomkamp and Peter Jackson. and starring Sharlto as Wikus van der Merwe, an Afrikaner bureaucrat whose job is to relocate a particular group of extraterrestrial creatures – referred to as ‘prawns’ – deserted on Earth. Wikus moves the prawns from a military-guard area in Johannesburg  called District 9 to an imprisonment camp just outside of the city. All of Sharlto’s dialogue in the film was improvised.

In 2010, Sharlto wrote, produced and directed a segment entitled “Wikus and Charlize” for the South African Film and Television Awards, staring Sharlto alongside Charlize Theron. Wikus went on a journey to Hollywood to find Charlize and get her to co-present the Best Afrikaans Pop Album category with him.

That same year, he appeared as Capt. ‘Howling Mad’ Murdock in the action and adventure film adaptation, “The A-Team,” produced by Tony Scott and Ridley Scott, Sharlto starring alongside Quinton ‘Rampage’ Jackson, Liam Neeson and Bradley Cooper. He adopted a Southern American dialect for his character, and also used aspects of South African, Australian, Scottish and English dialects to add to Murdock’s rapid-fire style. The original television series ran from 23 January 1983 to 8 March 1987, with Shalto praised for his performance as the only actor who was ‘true to his character.’ On 7 June 2010, he was a guest host along with his “A-Team” co-stars Quinton Jackson and Bradley Cooper on “WWE Raw.”

In 2013 he appeared in the science fiction film “Elysium” as villain Agent Kruger along with Jodie Foster and Matt Damon. Neill Blomkamp wrote and directed the film. In one scene, he sings a nursery rhyme in Afrikaans. That year, he also played James Corrigan in “Europa Report”, part of a team of international astronauts going to Jupiter’s fourth moon on a private mission. He played another villain, Adrian Pryce, in the 2013 remake of the 2003 South Korean film “Oldboy”, directed by Spike Lee.

In 2014 Sharlto played King Stefan, Aurora’s father in “Maleficient,” starring Angelina Jolie as the titular character and Elle Fanning as Aurora (also known as Sleeping Beauty). Sharlto lent his voice to the animated film “The Snow Queen 2: The Snow King” as the character Orm. In 2015 he starred in the dystopian sci-fi action film “Chappie” as the title character, directed by Neill Blomkamp, with Sharlto providing the reference work, interaction with cast members, and voice of the character. That same year, the superhero television series “Powers,” announced Sharlto as the lead role, Christian Walker. For an Audi Sport GmbH promotional video, Sharlto voiced the e-tron GT concept.

Sharlto was an executive producer, and actor in the sci-fi action “Hardcore Henry” in 2016; starred in “Rooster Teeth Shorts,” a web series, and in the video game entitled “Payday 2.” He worked on the short film “God: Serengeti” in 2017. In March 2018, he starred as Mitch Rusk in the crime comedy “Gringo”, and appeared in “God: City,” a sequel to the previous short film.

“The Last Days of American Crime” was a 2020 thriller movie directed by Olivier Megaton in which Sharlto played William Sawyer. He next portrayed Ted Kaczynski in “Ted K,” a 2021 biographical film about his character, and then once again lent his voice to an animated film, as Switch in “Seal Team.”

On 12 August 2022, a CapeTalk anchor, Pippa Hudson released a 45-minute interview with Sharlto. They discussed his newest project, “Beast,” in which Sharlto starred as Martin Battles, a wildlife biologist, and manager of a game ranger. He stars alongside Idris Alba as Dr. Nate Samuels, Leah Jeffries as Norah Samuels, and Iyana Halley as Meredith Samuels; Nate takes his daughters to explore his wife’s hometown in South Africa, after her passing. Nate met his wife in South Africa and that is also where he first met Martin, who is one of his closest friends. The family’s trip starts off well, but soon the wildlife starts chasing and attacking them, forcing Martin, Nate, and the girls to fight for their survival from a rogue lion, determined to catch his prey.

“Beast” was written by Ryan Engle and directed by Baltasar Kormákur. The supporting cast is made up of mostly South African actors as is the crew, and the majority of the thriller was filmed in Limpopo, sometimes even camping out in the bushes. During an interview with IOL Entertainment at the film’s premiere, he told them, ‘I’m super proud to be able to be a part of allowing the film to be set in South Africa. It was an incredible experience to shoot here.’ Sharlto laughed when he said they were chased by a black rhino. He also shared that although he wants the film to do well, he does not care for winning awards, ‘I’ve never been interested in the awards side of our business. Like, I would love my projects to do well commercially, but I’ve always felt a very strange feeling around, like, giving awards for what we do… it’s kind of irrelevant to me, either way.’

Other cast members who attended the premiere included Naledi Mogadime, a former “Big Brother Mzansi” contestant and first-time actress. Naledi played Nate’s wife and discussed acting with Idris, ‘It was so amazing to be playing alongside Idris. This is my first acting role and I was blown away by the experience. I look forward to the new opportunities that will come after this.’ Kazi Khuboni and Martin Munro were there along with television presenters Shahan Ramkissoon and Katlego Maboe. Die Antwoord, one of South Africa’s most famous rap-rave duos, also graced the red carpet.

On 16 August 2022, BroBible published their interview with Sharlto. He shared that Neill has been planning the “District 9” sequel entitled “District 10” for years. ‘… we’ve been working. I did a draft, I sent it back to him. He’s done a draft. It’s like just tiring to find the right story… So maybe in like a year, year-and-a-half [we’ll begin filming]. He wants to have something to say.’ When Neill was asked about the film he said, ‘It took a decade to figure out, to come up with a reason why to make that film as opposed to just make a sequel.’

Sharlto received a lot of nominations, particularly between 2009 and 2010. In 2009, he won two IGN Movie Awards in the Favorite Summer Hero category and Best Performance category.

In January 2012, Sharlto began dating fellow South African actress and model Tanit Phoenix. They took a trip to Kauai, Hawaii, and on 28 March 2015, Sharlto popped the big question and Tanit said ‘yes.’ They married in Cape Town on 15 February 2016 and have a daughter, Sielle Phoenix Copley together; her birth was announced on 1 January 2017.

The family lives between Los Angeles and Cape Town, but generally a very private life.

As of August 2022, Sharlto’s net worth is estimated at $15 million, thanks to his work as an actor, writer, producer, and director. His monthly income is averaged at $57,698.