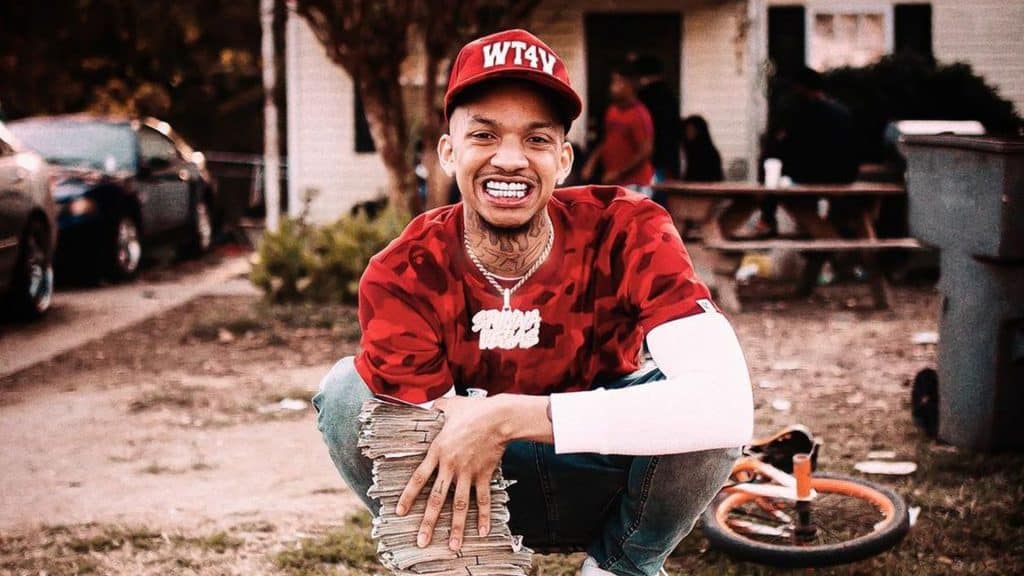 Who is Stunna 4 Vegas?

American rapper Khalick Antonio Caldwell, who’s probably better known by his stage name Stunna 4 Vegas, was born in Salisbury, North Carolina USA, on 1 January 1996 under the zodiac sign of Capricorn. Stunna’s steadily making a name for himself in the rap music genre, and has attracted quite a lot of attention with his four albums and many singles, especially with his songs “Up the Smoke” and “Animal”.

Stunna was raised by his parents in Salisbury, but because he rarely mentions them during his interviews, it’s believed that they aren’t on good terms; it’s known that Stunna has an adoptive brother who began rapping before him, but who chose to focus on his family rather than on pursuing a rapping career.

Stunna fell in love with rapping while attending high school, and was 17 when he began writing his own songs. He matriculated in 2014, and the same year saw the launch of his career, however, he attracted little attention in the following three years, as he only occasionally performed at venues around Salisbury. He worked a couple of jobs to financially support himself, while chasing his dreams of becoming a famous rapper.

Stunna’s debut mixtape “Boot Up” was released in 2017, but he only attracted attention in September 2018, when he and famous American rapper Jonathan Lyndale ‘DaBaby’ Kirk released their collaborative song “Animal”. It only became popular after DaBaby had uploaded it onto his YouTube channel, which is today subscribed to by nearly 10 million people. Stunna then signed a contract with DaBaby’s Billion Dollar Baby Entertainment record label, and was in November 2018 featured in Producer 20’s mixtape “Blank Blank”.

In March 2019, he was featured in DaBaby’s song “Joggers”, and not long after that in American rapper Asian Da Brat’s song “I Love It”. Stunna signed a contract with Interscope Records in May 2019, and released his debut album “BIG 4X” on 10 May; several popular rappers could’ve been heard featured in Stunna’s songs, including Lil Durk, NLE Choppa and Offset, and “BIG 4X” peaked at #50 on the Billboard 200 chart.

The following couple of months saw Stunna release the singles “Tomorrow”, “Flintstones” and “Boat 4 Vegas”, and he was also featured in DaBaby’s song “Really”, which reached #63 on the Billboard Hot 100 chart.

Stunna’s second album “Rich Youngin” came out on 17 January 2020, and once against featured many popular rappers, such as Offset, Blac Youngsta and Lil Baby; it reached #29 on Billboard 200, and received mostly positive reviews. He released the single “Go Stupid” in February 2020, and it peaked at #60 on Billboard Hot 100; Stunna and DaBaby then collaborated on the song “No Dribble”, released on 27 July 2020.

Stunna’s third album “Welcome to 4 Vegas” came out in November 2020 but failed to chart; most recently, on 20 May 2022 he released his fourth album “Rae Rae’s Son”, which also failed to chart.

Stunna launched his YouTube channel “Stunna 4 Vegas” on 20 July 2016, and there are over 520,000 people subscribed to it today, while it numbers nearly 200 million views of all his videos combined. Although he initially launched it so that he could upload his music, he’s nowadays also uploading videos which feature him during his everyday life; we’ll be covering three of the most popular amongst these, which have made many people become Stunna’s subscribers.

His #1 video “Stunna 4 Vegas – Billion Dollar Baby ft. DaBaby (Official Music Video)” has been watched over 27 million times since 4 April 2019, and it was this song that helped Stunna gain recognition in the rap industry.

Stunna’s most popular #3 video “Stunna 4 Vegas – Intro”, has been watched close to 10 million times since 10 May 2019, and is his original song; it was produced by Deejaytrap, while the music video was directed by Reel Goats.

Stunna held a concert in Killeen, Texas in July 2021, and although various media outlets have reported that the shooting occurred at the concert, the police later revealed that it had actually taken place at an afterparty, behind the strip club Naked City; non-celebrity American man Deon Elliott was shot and killed.

Stunna rarely talks about his love life during his interviews, however, he’s recently opened up about being in love with American musician and social media star Leondra Roshawn Gay – aka Monaleo – she’s steadily making a name for herself in the industry, and some of her most popular songs are “Beating Down Yo Block”, “Suck It Up” and “Girls Outside”. Monaleo has revealed her mental health issues, that she’s attempted suicide, but that she’s found happiness with him.

Stunna also has a son from a former relationship, but hasn’t disclosed the boy’s mother’s name or profession.

He’s in a relationship with Monaleo as of October 2022, hasn’t married, and has a son with a former girlfriend.

Stunna’s Instagram account “RAE RAE SON” is followed by close to two million people, and there are today over 100 pictures and videos posted onto it.

He has a couple of tattoos on his head and right arm.

Stunna’s been into basketball since his teenage years, and occasionally plays with his friends; some of his Instagram videos feature him dunking. His favorite National Basketball Association (NBA) player is LeBron James.

Stunna’s already performed in over 30 US states, and his dream is to embark on a tour around the world.

His favorite actors are Mel Gibson, Edward Norton and Kevin Spacey, and a couple of his favorite movies are “Braveheart”, “Hacksaw Ridge” and “What Women Want”.

He goes to the gym multiple times every week.