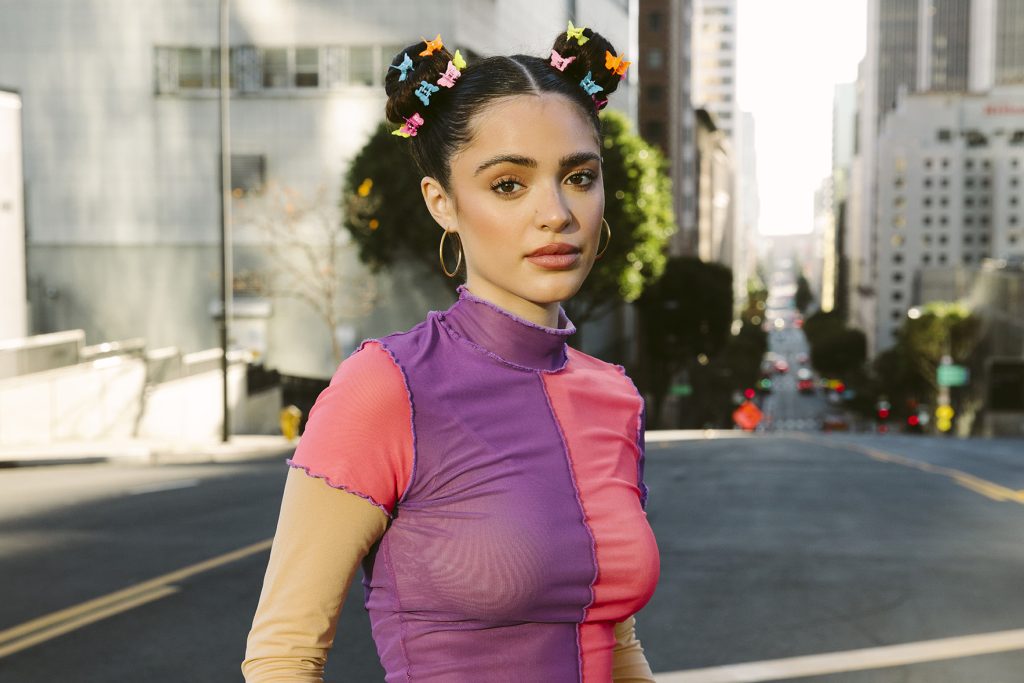 Luna Blaise is a famed American actress, known widely for her appearances in the TV series’ “Manifest” and ABC’s “Fresh Off the Boat.”

Luna Blaise was born in Los Angeles, California, under the Libra zodiac sign on 1 October 2001, which makes her 21 years old as of 2022. Her father is the writer and director, Paul Boyd, who is a native of Glasgow, Scotland, and her Texan mother and Paul’s wife is actress Angelyna Martinez. Luna is of Scottish and Hispanic ancestry, and was raised together with her elder brother, River Boyd. She began watching films and TV series as a child, and thus developed an interest in acting at an early age. Her parents were supportive of her interests, and took her to several film auditions. Luckily, she landed her first role as Victoria in the drama “Konflooent” at the age of six, and concurrently appeared in many commercials for KFC, Mcdonald’s and Duncan Hines.

Lu Lu, as some of her close friends and family call her, was homeschooled until she turned 13, then attended a local high school and matriculated in 2019 – she didn’t attend college, but focused on her career.

Luna contributes to several charity movements and organizations – she has also participated in several peaceful protests in support of the Black Lives Matter movement among others.

She is a dedicated environmental activist, who previously shared ‘One of the things I was fascinated by was the way our ecosystem worked. It all comes from the water: all of it. I learned that we humans were slowly destroying our ecosystem by polluting our oceans. That is where it began for me.’

The Californian actress likes watching films and shows starring her favorite entertainers such as Matt Damon and Julia Roberts – her favorite productions are “Good Will Hunting,” “The Sleepers,” and “Pretty Woman.”

She also likes singing and listening to music – her favorite musicians are Selena Gomez, Shawn Mendez and Bruno Mars.

Luna Blaise is an actress, singer, and star of the hit NBC show 'Manifest.' pic.twitter.com/rU5DV0OeN5

She is also keen on traveling, and has toured various US states such as Nevada and Arizona both for work and leisure.

The “Manifest” star likes sun tanning at the beach during the summer; she also enjoys playing beach volleyball.

Many believe that Luna is related to Kylie Jenner because they are look-alikes; however, she’s confirmed that she is not even distantly related to her.

Blaise made her film debut aged seven in “Vicious,” which was released in 2008. Then balancing education with her budding career, landed the role of Nina in the 2012 Vladimir de Fontenay-directed film “Memoria,’ which was based on James Franco’s “Palo Alto” stories. Responding to a question about her experiences in “Memoria” during an interview with Flaunt, she said, ‘I didn’t appreciate it enough at the time because I was so young, but being in a James Franco film is pretty cool. Filming that, I came to understand what acting is: portraying someone else and bringing them to life. If you see the movie, it’s totally not who I am in any way, but that’s what I love about acting.’

Next, Luna appeared in the 2016 film “Detach”, and in 2018 landed the role of Eileen in the short film, “Surviving Theater 9”, and starred in the Lije Sarki-directed family adventure movie “Concrete Kids,” which co-starred Jacob Messex, Myles Strampello, and Christopher Romero. Her most recent role has been in the 2021 drama “We Are Gathered Here Today.”

Luna has so far appeared in two series; between 2015 and 2018, she portrayed Nicole in over 20 episodes of Nahnatchka Khan’s acclaimed comedy series “Fresh Off the Boat,” which starred Hudson Yang, Constance Wu, and Randall Park. Luna is now busy with the NBC sci-fi series “Manifest,” which stars Melisa Roxburgh, J.R. Ramirez, and Josh Dallas, and which premiered in 2018.

Musical Career and Other Works

Luna starred in the music video entitled “Jacob Sartorius: Sweatshirt” in 2016, and in the same year created a self-titled YouTube channel. In the year that followed, she released her first song, “Over You,” then “Camera Roll,” and later “Secrets” in 2018, uploading all her singles onto her channel.

Blaise appeared in the talk show “E.W.C. – Express Written Consent” in 2012 and in 2015 she was invited to contribute to the show “Q N’ A with Mikki and Shay”. In 2017, she featured in another talk show “TinaQ’s Celebrity Interviews”, and the TV special entitled “37th Annual Young Artist awards.” 2019 saw her appearing in an episode of the show “Today.”

Luna’s appearance in “Fresh Off the Boat” saw her winning a 2016 Young Artist Award – Best Performance in a TV Series. She was also nominated for a Young Entertainer Award for appearing in the aforementioned show.

Blaise is active on several social media platforms, including Instagram, with over a million followers, and she has verified Twitter and Facebook accounts with over 100,000 and 60,000 fans respectively.

Luna prefers spending her time together with her parents and close friends, and hasn’t disclosed many details of her personal life. She was formerly rumored to be in a relationship with the American social media star and singer, Jacob Sartorius, who is slightly younger than her, and famous for his TikTok works with over 24 million fans on the platform. In the past, she received many threats from Jacob’s admirers, but handled the situation calmly and gracefully. Jacob and Luna haven’t confirmed whether they were indeed dating, and the rumours ended when the former started dating actress Millie Brown.

There were other rumors that Luna was dating the singer and actor Ricky Garcia, which began spreading when they were spotted together at the Gay and Lesbian Alliance Against Defamation (GLAAD) Media Awards. However, shortly afterwards, Ricky, who is famous for playing Monks in the film “Finding ‘Ohana,” began seeing the American model, Beatrice Vendramin. Luna is apparently now single, and seemingly focused on her blossoming acting career.

Luna is a big supporter of the LGBTQ+ community, which has seen many of her fans believing that she might be a lesbian. She was actively involved with GLAAD during her time in the series “Fresh Off the Boat”, and admitted during an interview that playing a gay teen named Nicole in the show was a great honor and an important responsibility. She was allegedly spotted kissing a mysterious girl during a trip to Paris, France, but she hasn’t commented on the allegation.

Luna has earned a good net worth from her acting and modeling careers, and her wealth is reportedly around $700,000 as of 2022.