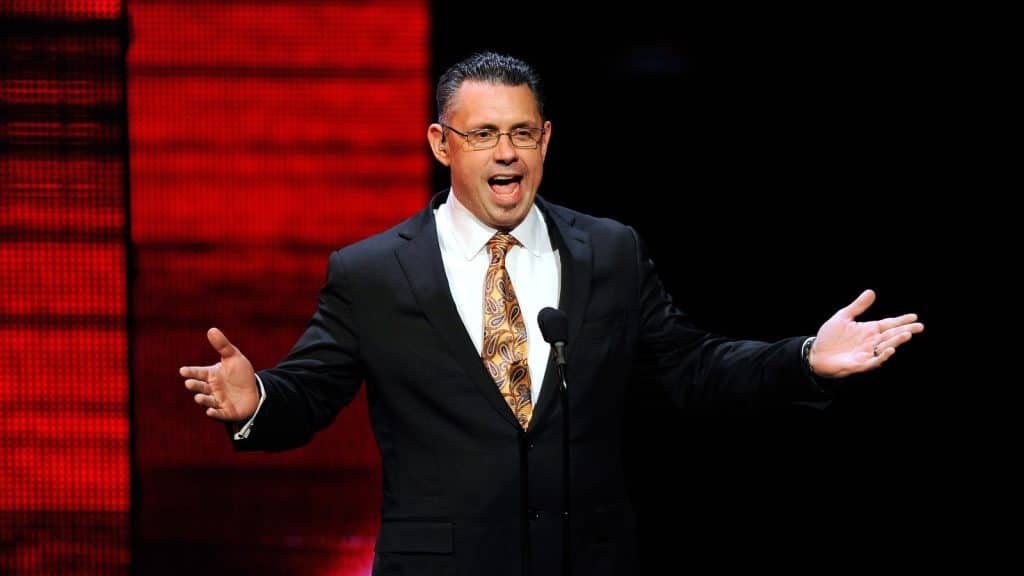 Michael Cole is an American journalist and wrestling commentator, perhaps known best for his work with World Wrestling Entertainment (WWE). He has been active for more than two decades and he doesn’t seem to be going anywhere anytime soon.

Sean Michael Coulthard was born on 8 December 1968, in Syracuse, New York State USA. His mother is a School Nurse, but his father’s name and occupation hasn’t been revealed to the public. His parents prefer to stay out of the limelight, and their son is respecting their wishes.

The journalist hasn’t revealed how he spent his childhood or which high school he attended, but he continued his studies at S.I. Newhouse School of Public Communications at Syracuse University.

Michael began his career at a local radio station in Houston, Texas, traveling to various places. Later he started working as a journalist at CBS, initially covering local events; he covered his first high-profile event in 1988, when he was chosen to follow the presidential campaign of Michael Dukakis, who was the nominee of the Democratic Party, then after four years, he covered Bill Clinton’s presidential campaign. According to WWE Network, Michael was assigned another important task in 1993 when he was chosen to cover the 51-day Waco Siege, during which law enforcement besieged the compound that belonged to the Branch Davidians religious sect.

Before joining the WWF in 1997,Michael Cole was an award-winning journalist,covering incidents and events such as the David Koresh 51-day siege in Waco in 1993 and the Oklahoma City Bombing in 1995 pic.twitter.com/uskMZckLxq

The journalist also covered the Yugoslavian Civil War in 1994, initially traveling to Sarajevo to report on the siege of the city by Serbian forces, but his six-week assignment turned into a nine-month operation. Michael would cover daily events in a city which was devastated by war, while avoiding bullets and bombs. After this experience, he worked on a documentary entitled “Voices of Bosnia”.

Michael was also in the epicenter of the Oklahoma City Bombing in 1995, covering the aftermath of the terrorist attack during which two local extremists bombed the Alfred P. Murrah Federal Building and killed almost 170 people. The following year he covered another presidential campaign, this time representing Steve Forbes and Sen. Bob Dole.

Career as a sports commentator and broadcaster

Michael Joined WWE Network in 1997, adopting the name Michael Cole, and mainly creating voice-overs for promotional content, and was later promoted to the position of host in the show “LiveWire Show”. In June 1997, he made his first appearance on screen when he interviewed the tag team The Legion of Doom in the show “Raw is War”, then becoming the host of the show “Monday Night Raw” opposite Kevin Kelly and Jim Ross, and in 1998, Cole received another promotion, becoming a play-by-play commentator of “Raw is War”.

Michael’s career took a more serious turn in 1999, when he was chosen as a play-by-play announcer in the American professional wrestling show “SmackDown!” In the beginning, his co-host was Jerry Lawler but he was substituted with Tazz in 2001. Occasionally, Cole was involved in storylines that included prominent wrestlers and tag teams such as D-Generation, Vito, Heidenreich, and Stephanie McMahon. Michael’s co-host Tazz was briefly replaced by Jerry Lawler, but he quickly left the show, and John “Bradshaw” Layfield (JBL) became his broadcast partner, replaced by Jonathan Coachman in 2008.

Cole left “SmackDown!” in 2008 after 10 years of being the announcer, replaced by Jim Ross, and returned to “Raw”. During the same period, Michael tried his chances in the ring at the World Tag Team Championship, wrestling with Lawler against The Legacy which was the tag team of Cody Rhodes and Ted DiBiase. In 2009, he received the Slammy Award for The “Oh My God” Moment of the Year, after vomiting on Chris Jericho in “SmackDown!”.

From 2010 to 2012, Michael was the lead commentator in the first three seasons of the show “WWE NXT” – during this time, he turned heel, showing favoritism, looking down on wrestlers, and displaying an arrogant character. He also started a feud with Jerry Lawler when he interfered with his wrestling match against The Miz. However, he about faced after 2012, when he embraced Lawler in the ring in an episode of “Raw”.

In 2013, Cole was a guest announcer in the show “Reality of Wrestling” opposite Rich Brennan, but continued appearing in “Raw” until 2019, returning to “SmackDown!” in September, his broadcasting partners being Corey Graves and Renee Young. In 2020, Michael became the Vice President of Announcing at WWE, and since 2021, he’s been broadcasting “SmackDown” with Pat McAfee.

Michael Cole is married to Yolanda – the couple tied the knot in 1987. Details of their relationship are unknown, however, they seem to be happy together. It’s also unclear what the occupation of Yolanda is. The couple has two adopted children: Adam Cole, who has followed in his father’s footsteps and is involved with wrestling, and Calvin Cole whose occupation is unknown.

When Michael Cole was heard as a guest in “The Pat McAfee Show” in 2021, he revealed that he’d lost about 65% of his hearing, and has to wear hearing aids underneath his headsets to hear the communication from his colleagues. Michael blames his condition on his career a,nd having to wear headsets all the time.

Michael Cole is 54 years old. He has short brown hair that is usually well-quaffed, brown eyes but wearing glasses. His billed height is 5ft 9ins (175cm) and weight 170lbs (77kgs). He wears his beard in a soul patch style. The journalist usually appears on TV in nice suits, wearing accessories such as ties and watches.

As of late 2022, Michael Cole’s net worth is estimated at close to $5 million, earned mainly from his job as a wrestling commentator. His annual income hasn’t been revealed to the public.