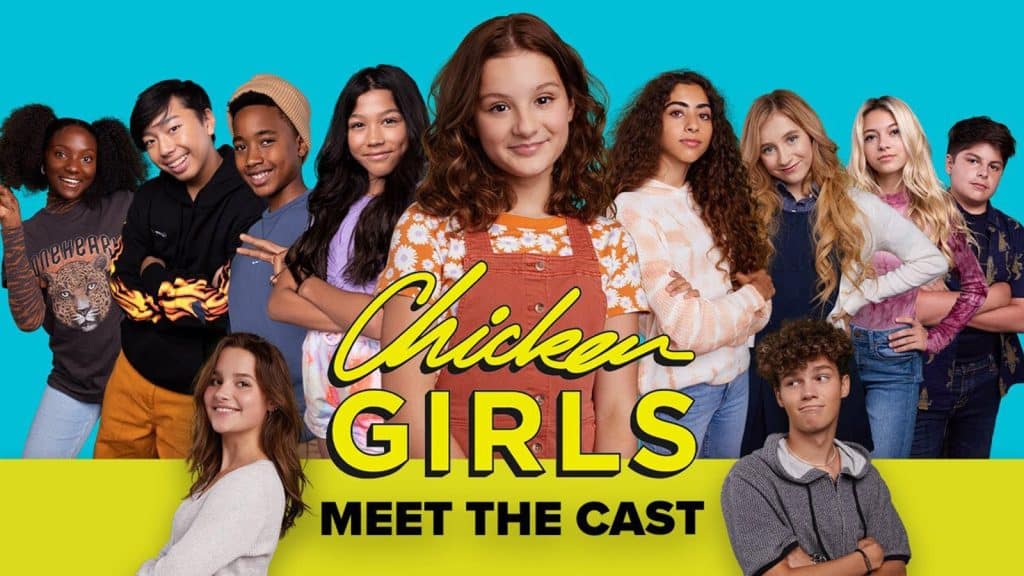 What is “Chicken Girls”?

Rife with backstabbing, boy drama, and secrets, “Chicken Girls” follows the middle school students Rhyme McAdams, Quinn, Ellie and Kayla – the self-named “Chicken Girls” – who have been dancing together for years. Already navigating complicated scenarios for pre-teens and young teens such as growing up, crushes, dancing and friendships, the whole dynamic changes as they begin studying at Attaway High School.

The show has 10 seasons and approximately 120 episodes as of October 2022. The opening theme song, “Birds of a Feather”, is sung by Brooke, Hayden, and Annie. Ramona Convent Secondary School and Brat Studios are the series’ main filming locations. Season seven of the show follows Harmony, who’s founded her own Chicken Girls squad.

According to Forbes, “Chicken Girls” and its fellow Brat show “Total Eclipse” have gained a combined 15 million unique viewers by 2019, when the company began monetizing its work with adverts. The first “Chicken Girls” movie had 38 million views by October 2022, making it Brat’s most-viewed program in history, whereas the network’s “Spring Breakaway” movie and the “Brat Holiday Spectacular” movie had a combined 16 million views.

Part of the web-series’ popularity is thanks to its huge and varied cast. Annie plays Rhyme McAdams, the older sister to Harmony, cousin of Astrid, and Ellie and Quinn’s best friend. Hayley plays Harmony McAdams, Annie’s feisty younger sister, who becomes the lead in season seven and forms her Chicken Girls crew with Bel, Leyla and Claire.

There are many more main characters, such as Luna (played by Aliyah Moulden), who was captain of the rival Power Surge dance team; Flash (played by Rush Holland), who is Tommy and Ace’s best friend and Kayla’s ex-boyfriend; and Kayla Seltzer (played by Dylan Conrique), who is Rhyme and Quinn’s ex-best friend. Tim Sharp plays Caden Conrique, who is Kayla’s cousin and Rhyme’s ex-boyfriend.

As you can see, pretty much all the main characters are either related to each other or have dated within the group, which makes things confusing to follow at times. There are other characters who disappear after a few seasons, but had important storylines during their episodes; Ace, for example, moves to California when an investor buys his mobile phone app, and Robbie Robbins, Ellie’s on-again-off-again boyfriend, disappeared after season six.

There are simply too many main characters to name in the first few seasons, but the focus gradually shifts onto the younger generation after season seven – the main cast is made up of Katie (played by Coco Quinn), one of Power Surge’s new members; Brittany Diamond (played by Txunamy Ortiz), another new member of Power Surge and Harmony’s childhood friend; Peyton Kaye (played by Enzo Lopez), Birdie and TK’s cousin; and Jordan (played by Matteo Gallegos), who is Harmony’s boyfriend.

With around 100 cast members in total throughout all the seasons, viewers can be forgiven for not remembering every single name and face. Many of the main characters appear in the Chicken Girls spin-off shows: with the huge boost in popularity the web-series received thanks to a 2017 Variety report, Brat released the first “Chicken Girls” movie in June 2018, which is set between seasons two and three. The “Brat Holiday Spectacular” movie is set after season three, and “Spring Breakaway”, featuring Indiana, Aliyah, Annie, Mackenzie Zeigler, and other “Chicken Girls” performers, released six months later. It was followed in March 2019 by “Spring Breakaway”, with the fourth season of “Chicken Girls” coming shortly afterwards.

Annie LeBlanc – also known professionally as Jules LeBlanc – is an actress, YouTuber, singer and former gymnast, born in Georgia, USA, in December 2004. Dubbed one of the world’s most famous teens by Business Insider in late 2018, the precocious adolescent earned her own loyal online fanbase after appearing on YouTube at the age of four. Before joining the Brat network, Annie was also part of “We Are Savvy”, a YouTube Red series aimed at the pre-teen demographic.

Born while her father Billy was stationed at Fort Gordon, Annie was raised alongside two siblings; her older brother Caleb tragically passed away at the young age of 13 from hypertrophic cardiomyopathy. Annie’s mother enrolled her in gymnastics classes at the age of two and started posting online videos of her performances a year later. Annie stopped gymnastics training in 2017.

The LeBlanc family lived in Severna Park, Maryland, for many years, but moved to Los Angeles so Annie could launch her music and acting careers. The former gymnast’s online popularity was a mix of hard work and perfect timing; the “Bratayley” YouTube channel she began appearing in as a youngster was initially made by the LeBlancs to record their daily comings and goings, but soon gained millions of followers.

Annie and Hayden’s cover of the Alex & Sierra song “Little Do You Know” also went viral, with Annie gaining a spot on Billboard’s Emerging Artists Chart. Thanks to their visibility, the two girls were given lead roles in “Chicken Girls”, despite their lack of acting experience. As the debut episode was seen by millions of people, Annie became an online household name for youth.

While filming for “Chicken Girls”, another of Annie’s song covers reached #34 on the Billboard Country Charts. Two months later, she dropped her debut original sing entitled “Ordinary Girl”, and it was announced in teen magazines that she’d be undertaking her first US tour in early 2018. Her second single, “Little Things”, came in February 2018, and was followed a mere three months later by the pop-country compilation album “Lollipop”, available on iTunes and other platforms.

After the success of her musical collaboration with Austin Brown, a fellow social media sensation and teen heartthrob, Annie tried her hand at Christmas songs with “It’s Gonna Snow”. In April 2018, the actress won the Shorty Award in the Muser of the Year category, after her TikTok content began gaining traction.

May 2018 brought more fantastic news for Annie’s career, when she and Addison Riecke were cast in “A Girl Named Joe”, a small-town mystery series aimed at adolescents, set in the early 1960s. In the same month, she appeared in “Chemistry”, Asher Angel’s music video. By November 2019, the Bratayley channel stopped uploading family vlogs after almost a decade, to focus on other projects.

In early 2020, Annie scored a lead role in “Side Hustle”, a Nickelodeon comedy series. With filming halted due to coronavirus restrictions, Nickelodeon kept them in the spotlight with a virtually-produced chat show that premiered in May 2020, eventually premiering “Side Hustle” in November 2020; the comedy series came to an end in July 2022.

Although Annie shows no signs of pursuing a full-time modelling career with everything else on her plate, she also worked as the face of Pacsun’s Fall 2021 collection. The campaign focused on nature, old friends, and reconnecting with oneself.

In contrast to the stellar PR machine behind Annie, there is far less available public information on her co-stars. The YouTuber and actress Mads Lewis, was born in Phoenix, Arizona, in December 2002, and raised in an upper-middle-class family by her parents Steve and Tiffany and alongside her siblings Dakota and Riley. Her father is a businessman, and her mother a housewife.

The blonde TikToker made her debut on “Chicken Girls”, making the most of the show’s popularity to branch out and begin monetizing her content on other platforms. She has been romantically linked (in no order) to the gym trainer Kevin Mejia, the social media personality Charles Gitnick, fellow TikToker Christian Plourde, and the aspiring singer Jaden Hossler. The direction Mads wishes to take with her career remains uncertain: for now, she appears to be focusing on TikTok and YouTube as revenue streams.

Next on the list is Indiana Massara: born in August 2002, the Australian model, social media personality, singer and actress is known for her work on “Chicken Girls”, and for landing a coveted spot on the Kiss FM New Next Up Artists list. The young adult has Irish, Italian, English and Albanian heritage, and was raised in the suburbs of Perth, Western Australia.

During her childhood, Indiana was a sporty tomboy. When her parents and older brother Presley moved to Los Angeles so as to focus on his acting career, she stayed in Australia with her grandparents, studying at Mercedes College, eventually joining her immediate family.

Indiana made her modelling debut at the age of 13, at Los Angeles Fashion Week. In 2017, she began working with the Brat network, and has portrayed Rooney Forrester in several of its shows and movies. Indiana also had the lead role in “Rooney’s Last Roll”, and made cameos in “Total Eclipse” and “Stuck”.

Indiana’s debut single, “Drama”, was released in 2017 and snagged a spot on Radio Disney’s top ten chart. Many of her songs have made Radio Disney’s top three, and are regularly played on Canadian, American and Australian radio – “Apology”, “That Day”, “Squeeze”, “In Your Dreams”, and “Do Yourself A Favor” are some of her many singles. The model began working on her debut EP in 2018; apparently Elvis Presley, Khalid and Beyonce are just some of her musical inspirations.

October 2018 was the month Indiana’s first ever tour began in Australia, alongside Joey Birlem, Zach Clayton and Tayler Holder. At 103.7 KISS-FM’s Kiss the Summer Hello event in June 2019, she opened for Bryce Vine, Ava Max and Why Don’t We. Exactly a year later, she began a podcast with friends Jared Barred and Zach Justice – The “Dropouts” – which has to date interviewed many teenaged social media personalities and aspiring celebrities.

Last but not least, Dylan Conrique is another of the show’s emerging stars. The actress and trained dancer has appeared in music videos with Mackenzie Ziegler and Johnny Orlando, having made her TV debut at just three years old in “The World’s Astonishing News!”. The baby-faced brunette took a break from acting to focus on her studies, but returned with the TV film “Weird Wild Wonderful Days of School”.

In 2017, Dylan launched her music career, and was cast as Kayla in “Chicken Girls”. She performed at the Rock Your Hair Anaheim concert and has hundreds of thousands of YouTube subscribers and over 1.5 million Instagram followers, meaning that sponsorships and endorsements also make up a pretty percentage of her income.

Dylan was born in April 2004, in Gilroy, a small city in California’s Santa Clara County, brought up by her parents David and Kathy, alongside her brother Caden, who is also an actor known for his work on web-series including “Chicken Girls”. Currently, the Conriques reside in Toluca Lake, Los Angeles.

Some of Dylan’s old flames include Skyler Lowell and Sebastian Moy, both young social media personalities, with millions of Instagram and TikTok followers. There is little mention of the “Chicken Girls” franchise on Dylan’s Instagram profile these days, given that as of October 2022, the striking actress is hard at work promoting her new music, and touring with Rach Hicks, Gray Trainer, Skyler, and others.

Over the years there have been rumors of personal drama amongst the “Chicken Girls” cast members. Although there is no concrete evidence, it’s not hard to believe that a web-series full of promising young talents could become a breeding ground for professional rivalry. For now, however, the show’s stars appear to be close and linked to each other, be it through friendships, romantic relationships, or family ties.