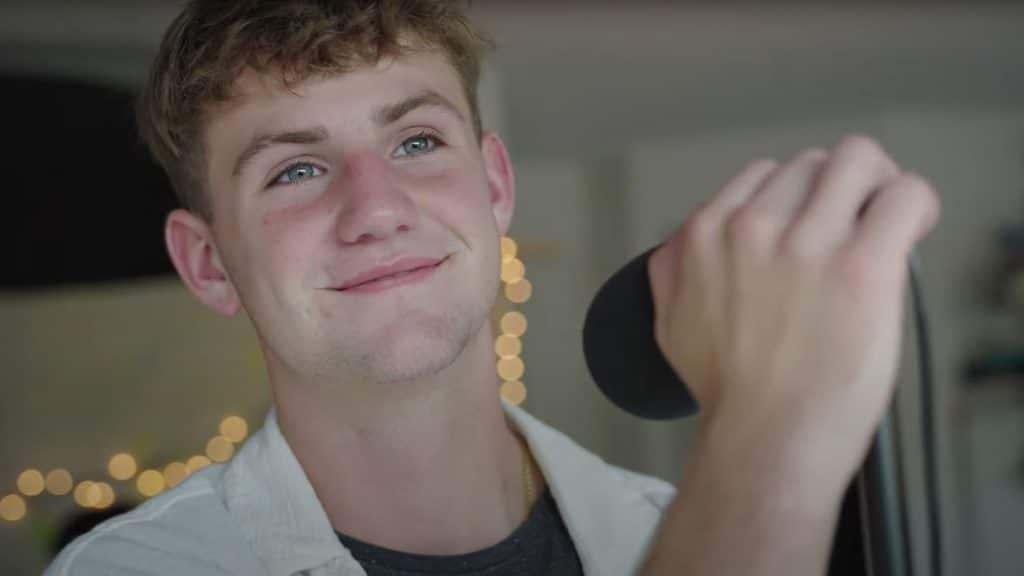 MattyBRaps is an American pop and rap star who first attained international fame by uploading covers and remixes of popular songs on his YouTube channel. Since then, he’s released his own songs, including “Right Now I’m Missing You”, “California Dreamin’”, and many others.

Matthew David Morris was born on 6 January 2003, in Duluth, Georgia, USA, the youngest of four brothers, Blake Jr, John Michael and Josh, and he has a younger sister, Sarah Grace. He’s the son of Blake Morris, a record producer, songwriter, and investor, who is also his manager, and Tawny Morris, a housewife.

He attended Wesleyan School, a private college-preparatory non-denominational Christian school, and didn’t enroll in any college since he became a music star before finishing high school.

MattyBRaps became interested in music at just five years old. He was first introduced to hip-hop and rap beats, which instantly inspired him to start dancing to those notes. His cousin, who goes by the name MarsRaps, moved in with the family, and alongside him their interest in this type of music only increased.

As he got older, he made sure that he would pursue a career in music, and at just seven years old, with the help of his cousin, he covered and remixed Justin Bieber’s song “Eenie Meenie”. Within a week, the music video for the song had over 500,000 views.

Next, the two worked on the remixed version of “I Believe In You”, with MattyBRaps writing the lyrics; the music video for the song now has more than 1.3 million views. He continued to make new music videos, but also more personal ones, such as “MattyBRaps Answers Your Questions”, replying to some of the most frequently asked questions, which include whether he has a girlfriend or if he plays some video games, and other topics.

His next music video was for his original song “Sugar, Sugar”, which now has more than 11 million views. MattyBRaps was becoming more popular with every new video, and in just two years, he had over 500 million views of his channel.

In 2012, MattyBRaps reached a new high with the music video for the song “That’s the Way”, as it peaked at #11 on the Billboard Social 50 Chart. Moreover, the popularity of the video doubled the number of followers on his social media handles, and YouTube as well.

His music continued to impress more people over the years, turning him into a YouTube star. He signed an exclusive deal with Endemol Beyond USA as a content creator, and began making short musical videos.

MattyBRaps released his official debut EP “Outside the Lines” in 2015, which featured songs such as “My oh My”, “New Kids”, “You Are My Shining Star”, and “The King”. Since then, he’s become focused on singles only, and so far has a number of popular hits to his name.

Posted by MattyBRaps on Sunday, September 5, 2021

He now has over 50 songs, and has used his YouTube popularity to promote his releases. He now has more than 14.5 million subscribers on his official YouTube channel, and his videos have been viewed around 3.3 billion times.

His recent hit singles include “Dramatic”, for which the music video has over 10 million views, then “Underdog”, and “Utopia”, among many others.

In addition to “Right Now I’m Missing You” and “California Dreamin’”, his most popular songs are “Monsters”, with over 185 million views, and “Little Beat”, which is a duet with Haschak Sisters, and has more than 155 million views.

In addition to MattyBRaps, he has another MattyBVlogs channel, which now has around 4.5 million subscribers. He’s made this channel a bit more personal, talking about his daily life adventures. He even has videos from when he was eight years old, showing his morning and night routines, his workout, and others.

He already has more than two billion views on this channel, and has recently launched the podcast “The Matthew Morris Show” – in the first episode, Matthew talked with singer and social media star Ivey Meeks.

According to reports, MattyBRaps’s net worth is estimated at $4 million as of late 2022, which he earned through his still young but prolific career as a rapper.

The teenage heartthrob has been linked to a number of girls from the entertainment world since he turned into a rap star. Some of the alleged affairs include those with Jojo Shiwa, CeCe, and Kate Cadogan. However, nothing has been confirmed.

According to reports, he is now single and focused on his rising career.

MattyBRaps authored his memoir book “That’s a Rap” with the help of writer Travis Trasher, published on 7 June 2016.

Since attaining world fame, MattyBRaps has appeared in several talk shows, including “The Wendy Williams Show”, “Dr. Phil”, and “The Queen Latifah Show”, among others.

He’s created a recording studio at his family home in Georgia; he was trained by Lisa Rosemond at Jan Smith Studios,  attended also by Usher and Justin Bieber.

Although young, he has already collaborated with several celebrity rappers, including Vanilla Ice, while he’s expressed a desire to work with Bruno Mars and Justin Bieber.

MattyBRaps is physically active, and in addition to going to the gym a few times a week, he plays basketball, football, and other sports.

He’s appeared in an episode of WWE Smackdown next to John Cena and The Rock in the ring.