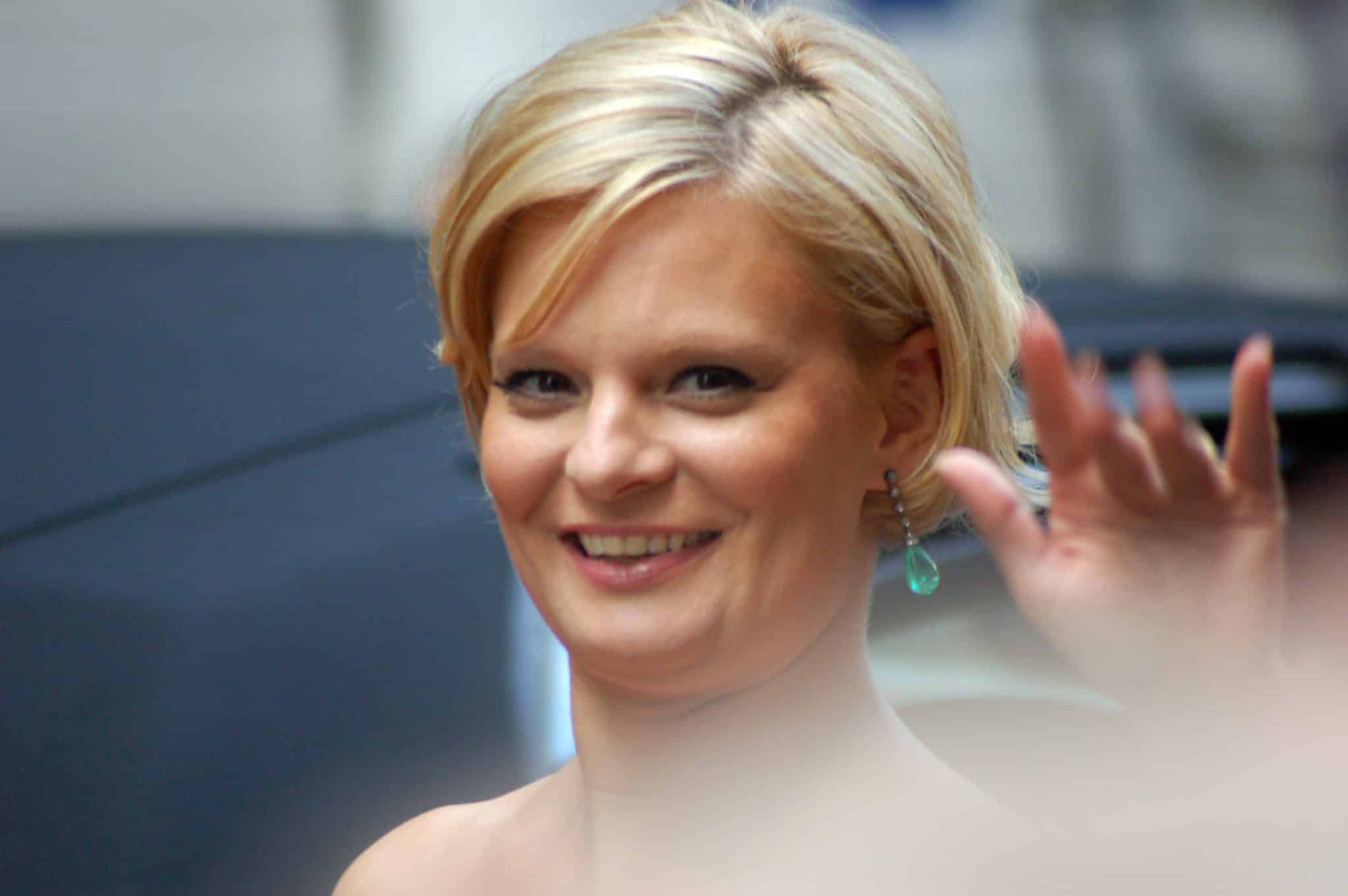 Who is Martha Plimpton?

American actress, screenwriter and director Martha Campbell Plimpton, was born in New York City USA, on 16 November 1970, making her zodiac sign Scorpio. Martha’s had roles in nearly 90 movies and TV series, but is perhaps still best known for her portrayal of Stef in the 1985 family adventure comedy movie  “The Goonies”, which Richard Donner created, and which starred Jeff Cohen, Josh Brolin and Sean Astin. It follows a group of young adults who’ve found a treasure map, and have embarked on a journey to find the legendary pirate’s treasure; the film won three of its nine award nominations.

Martha, her brother Cade Carradine and sister Sorel Carradine were raised in New York City by their mother Shelley Plimpton and father Keith Carradine; Shelley’s a retired actress and is perhaps still best known for her playing of Randa in the 1971 science fiction adventure movie “Glen and Randa”, while Keith’s still highly active in the film industry – he’s appeared in nearly 150 movies and TV series, and is probably still best known for his playing of Tom Frank in the 1975 musical comedy movie “Nashville”, which won an Oscar for Best Music, Original Song.

Martha fell in love with acting at quite an early age, mostly thanks to her parents’ careers. She studied at the Manhattan Professional Children’s School, and launched her acting career aged 10, when cast to play Fewster’s Older Daughter in the 1981 romantic mystery movie “Rollover”; she made her debut TV series appearance two years later, in the episode “The Hand Me Down Kid” of the adventure comedy drama “ABC Afterschool Specials”.

Martha continued acting while attending elementary and high school, and upon matriculating in 1989, chose to pursue an acting career rather than a college degree.

Martha played Jonsy in the 1984 adventure crime drama “The River Rat”, and a couple of her following roles were in the 1986 adventure thriller drama “The Mosquito Coast”, the 1987 drama “Shy People”, and the 1988 comedy “Stars and Bars”.

She played Kelly in the 1990 romantic drama “Stanley & Iris”, directed by Martin Ritt, and starring Jane Fonda, Robert De Niro and Swoosie Kurtz; it follows a widow who’s fallen in love with a cook whom she’s teaching to read every night. Martha could then have been seen playing supporting characters in the 1993 drama “Chantilly Lace”, the adventure comedy drama “Josh and S. A. M.” in the same year, and in the following year the drama “The Beans of Egypt, Maine”.

The year 1996 saw her play Jan in the critically acclaimed romantic comedy drama “Beautiful Girls”, directed by Ted Demme, and which starred Matt Dillon, Timothy Hutton and Noah Emmerich. It follows a pianist who’s returned to his hometown because of personal issues, and has found out that his friends are also struggling with love and life; the movie won one of its four award nominations.

A couple of Martha’s film roles in the remainder of the ‘90s were in the 1998 crime thriller drama “The Defenders: Choice of Evils”, its sequel the same year “The Defenders: Taking the First”, and the 1999 romantic comedy drama “200 Cigarettes”.

She had only a couple of movie roles in the 2000s, while the most popular amongst these was perhaps the 2007 animated comedy “Dante’s Inferno” (voice role), written and directed by Sean Meredith, and which starred Tony Abatemarco, Scott Adsit and Matt Besser. It follows the lives of several politicians, popes and presidents, and the movie won a Festival Prize for Best Director at the 2007 Los Angeles Silver Lake Film Festival. The remainder of the decade saw Martha appear in the 2008 comedy “The End of Steve”, and the 2008 short comedy “Gone to the Dogs”.

She was then cast to play supporting characters in the 2010 crime thriller drama “Small Town Murder Songs” and the 2011 musical comedy drama “Company”, before in 2017, portraying the lead character Ruth in the musical drama “Hello Again”, directed by Tom Gustafson, and which also starred Sam Underwood and Nolan Gerard Funk; it follows 10 people, all of whom are romantically linked to each other.

Martha played Jessie Blake in the 1985 episode “You’ve Got a Friend” of the family comedy drama “Family Ties”, and her following TV series role came 14 years later, when cast to play Meg Corwin in four episodes of the popular romantic drama “ER”, which Michael Crichton created, and which starred Julianna Margulies, George Clooney and Anthony Edwards. It follows the lives of the staff of Chicago’s County General Hospital, the series aired from 1994 to 2009, and won 179 of its 549 award nominations.

The first half of the 2000s saw Martha appear in an episode of a couple of series, such as the mystery crime drama “Law & Order: Special Victims Unit”, the crime drama “Hack”, and the drama “Karen Sisco”. In 2006, she played Mr. Big and Dr. Morris in the popular mystery adventure drama “Surface”, created by Jonas and Josh Pate, and which starred Lake Bell, Jay R. Ferguson and Carter Jenkins. It follows the emergence of a new and dangerous sea life species, and the series won two of its seven award nominations.

Between 2010 and 2014, Martha played Virginia Chance in the critically acclaimed family comedy “Raising Hope”, which Gregory Thomas Garcia created, and co-starred Garret Dillahunt and Lucas Neff. It follows Jimmy whose one-night stand has ended up in prison, and has left him to raise their child; the series won five of its 28 award nominations.

The #Emmys really snubbed @standup4justice and Martha Plimpton in #GENERATION? Y’all could have made some room. #RenewGeneration for a second season. It is needed. 🌈 pic.twitter.com/HygF38hiRE

She received special thanks for the 1997 short movie “Joe”, and the 2012 romantic comedy movie “Sparrows Dance”.

Martha’s been featured in many documentaries, most recently in the 2011 movie “Adventures in Plymptoons!”, the 2013 TV special “The 67th Annual Tony Awards”, and the 2021 podcast “The Cinnamon Bear: A Holiday Adventure”.

She’s made a guest appearance in talk-shows “Portrait Artist of the Year”, “Reunited Apart” and “To Tell the Truth”, amongst others.

Martha’s won six of her 24 award nominations. Some of her wins include a 2012 Primetime Emmy for Outstanding Guest Actress in a Drama Series, for her performance in “The Good Wife”, a 2022 Robert Altman Award, and in the same year a Gold Derby Film Award, both for her and her colleagues’ performance in “Mass”.

Martha met the late American actor and musician River Jude Phoenix in 1985, and although the two didn’t get along at the beginning, they began dating in February 1986 after having been cast to star together in the drama movie “The Mosquito Coast”.

The two then appeared alongside in the 1988 drama movie “Running on Empty”, but Martha broke up with River in the following year, because of his alcohol and drug addiction; the two still remained close until River died on 31 October 1993, from ‘acute multiple drug intoxication’.

Martha then became engaged to American actor Jon Patrick Walker in 1996, but they didn’t marry, and she then dated American actor and comedian Fereydun Robert ‘Fred’ Armisen in 2005 and 2006.

She seems to be single as of October 2022, hasn’t married and doesn’t have children.

Her parents weren’t married when she was conceived – they were both performing in a Broadway production of the critically acclaimed play “Hair”.

She became a vegetarian after River Phoenix talked her into it.

Martha’s the subject of the song “Light Breathing (Me and Martha Plimpton in a Fancy Elevator)” by The Lawrence Arms.

There are more than 100,000 people following Martha on Instagram, and she’s posted over 1,600 pictures and videos onto the social media network.

Her favorite actresses are Helena Bonham Carter and Anne Hathaway, while some of her favorite movies include “Enola Holmes 2”, “Cinderella”, and “The King’s Speech”.