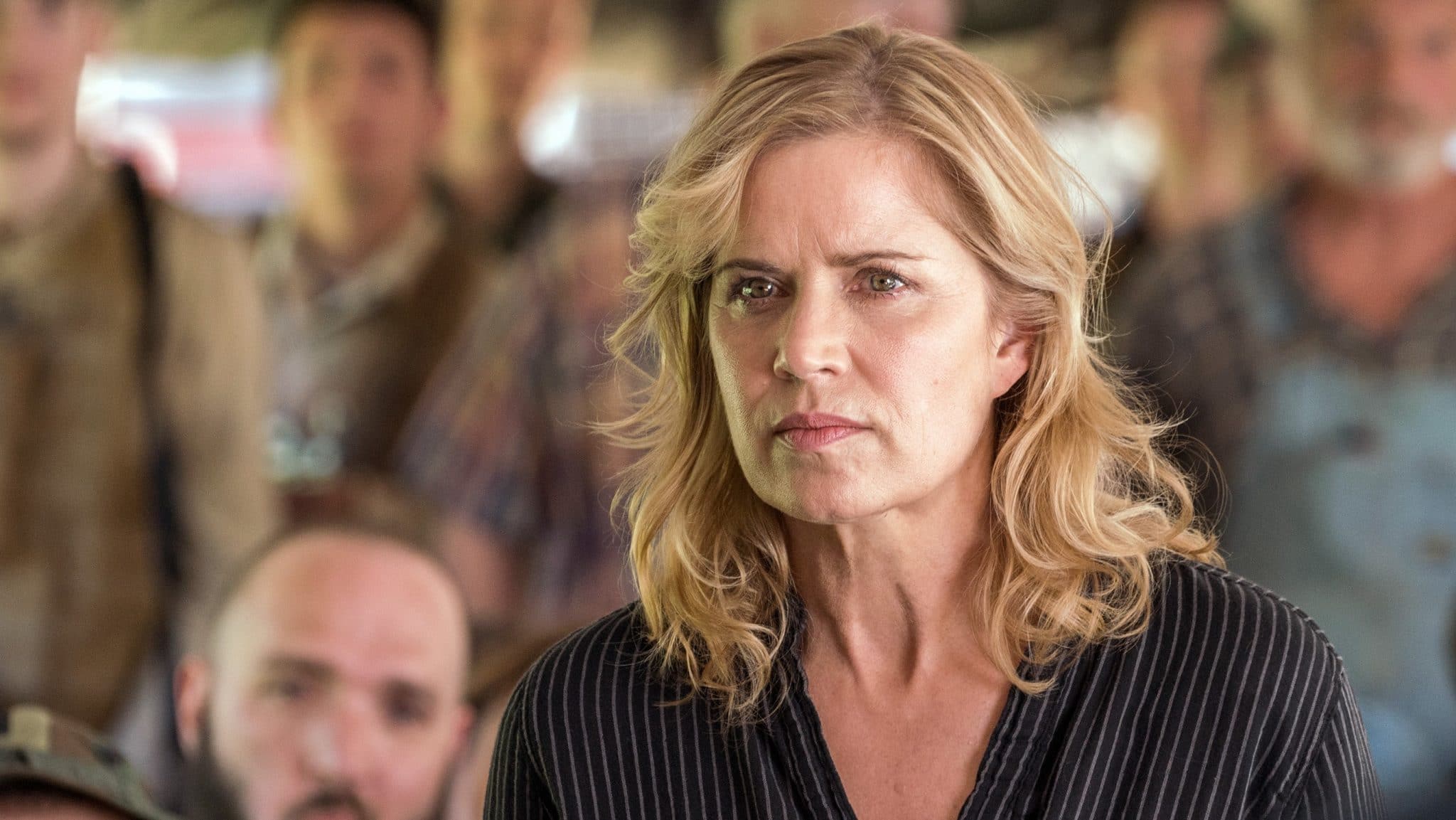 American actress Kim Dickens is well-known for her many standout roles in films and television shows. She began her professional acting career at a very young age and continued to complete her degree at the Lee Strasberg Theatre and Film Institute. She had the opportunity to work on several high-profile, box office-dominating films throughout her career, including “Hollow Man” and “Gone Girl.” The actress has achieved several awards for her success and has been nominated for many other awards. Aside from “Fear of the Walking Dead,” Kim Dickens has appeared in several popular television shows, such as “Deadwood,” “House of Cards,” and “Treme.” Her preferred genres of work include drama, comedy, and mystery films.

The phenomenal actress Dickens was born on June 18 1965, in Huntsville, Alabama, USA. The 57-years-old actress holds American nationality and white ethnicity. Justin Dickens and Pam (Clark) Howell are her parents. Her father sang in the country and western genres. After completing her studies at Lee High School in Huntsville, Alabama, she joined Vanderbilt University in Nashville to get a Bachelor of Arts in Communication. She later moved to New York after graduation, continuing her education at the Lee Strasberg Theatre and Film Institute. Back then, the struggling actress worked as a waitress to support herself financially. Kim eventually received her degree from the American Academy of Dramatic Arts. In the late 1990s, she finally moved to Los Angeles.

Kim started her acting career in the entertainment business with Theatre performances. She made her stage debut in a student-produced production of the play “Sexual Perversity in Chicago” at Vanderbilt University in Nashville. In 1995, the actress made her debut in feature films with the comedy “Palookaville,” which came out a few years later. She appeared in television movies like “Two Mothers for Zachary” and “Voice from the Grave” shortly after that. She had a role in the Charles Dickens classic “Great Expectations,” adapted to the big screen in 1998. Kim Dickens was involved in several crucial movies in 2000. She co-starred in films like “Committed” with Heather Graham, “Hollow Man” with Elisabeth Shue and Kevin Bacon, and “The Gift” with Cate Blanchett. Her work in the independent film “Things Behind the Sun” in 2001 received high praise and was nominated for the ‘Best Female Lead’ in the Independent Spirit Award.

At that time, She started working on television projects as well. She appeared in “Deadwood” between 2004 and 2006. She also worked on other projects like “Numbers,” “Lost,” “12 Miles of Bad Road,” and others. Kim worked on the films “Wild Tigers I Have Known,” “House of Sand and Fog,” “Red,” and “Thank You for Smoking,” and In the television series “Treme,” Kim started portraying the recurring role of Janette Desautel in 2010. Over three years, she took part in 36 episodes. The veteran actress appeared in episodes of the “Sons of Anarchy” television show between 2013 and 2014. In the 2014 film “Gone Girl,” she won praise for portraying Detective Rhonda Boney. In 2015, she appeared as a leading actor in the political drama web series “Houses of Cards.” She continues to have a connection to the series. Later, she started playing the main character in the TV show “Fear the Walking Dead” in 2015. The series is still airing.

Craig William Macneill’s upcoming biographical thriller movie “Lizzie” is Kim Dickens’ most recent work. The HBO western “Deadwood” and the independent film “Things Behind the Sun” both received high praise for Kim Dickens’s performances. Kim got nominations for the Screen Actors Guild Award for Outstanding Performance and the Best Female Lead for the former in the Independent Spirit Award. Dickens made a cameo in the 2021 movie Land. On Talking Dead in December 2021, it was revealed that Dickens would return to “Fear the Walking Dead” in the seventh season and become a series regular in the eighth.

To personally inform fans of the news, Dickens made a surprise visit as a guest star on the program. When Madison sacrificed herself by guiding zombies back into the baseball stadium and locking herself there so the others might escape in season 4, Kim Dickens’ character appeared to have already died.

There isn’t much information accessible about Kim Dickens’ personal life because she prefers to lead a private life. After she portrayed a lesbian character in “Deadwood,” she was not only called a phenomenal actress but also made people question her sexuality. Jill Sobule and her friendship fueled the rumors spreading like wildfire. However, all the talks ended when her husband’s identity appeared in the media.

The actress reportedly wed Alexander Rockwell, her boyfriend, in 1986, and the two separated in 1996. Ken Dixon, a Canadian entrepreneur, was her ex-husband. Kim Dickens and Ken Dixon wed in a low-key ceremony in front of their relatives and friends. In 2000, the couple gave birth to a daughter. Towards the end of the 1990s, Dickens relocated to Los Angeles. She is now dating Leisha Hailey, an actress well recognized for her work on The L Word.

Who is Leisha Hailey?

Leisha Hailey is known for her role as Alice Pieszecki in the Showtime Networks television series The L Word. Later, she also acted in the sequel “The L Word: Generation Q and also served as an executive producer. As a member of the pop duo The Murmurs, Hailey initially caught the general public’s attention as a musician. Since joining the band Uh Huh Her, she is still actively performing.

In 1991, when Hailey was only 20 years old, she began a career as an actor. In a short amount of time, she quickly advanced in her field and became more successful. She gained widespread fame and influenced people through her work.

Leisha Hailey, a famous actress and musician, was born on July 11, 1971, in Okinawa, Japan. Hailey was born and raised in Bellevue, Nebraska, to American parents who were stationed in the United States Civil Administration of the Ryukyu Islands, Japan. She shifted to New York City and enrolled at the American Academy of Dramatic Arts at age 17.

In 1991, she started the musical group The Murmurs with Heather Grody, a classmate at the Academy. They made several records in the 1990s and went on tour with Lilith Fair. Gush became the new name for Hailey and Grody in 2001. When Hailey was cast in “The L Word,” the group split up. Hailey launched Marfa Records in 2005. As a struggling singer in the “Boy Meets World” episode, Hailey made her acting debut on television in 1996. The actress gave her first significant cinematic role in “All Over Me,” which came out in 1997. In 2007, AfterEllen.com’s AfterEllen Hot 100 list ranked Hailey as the sexiest lady.

Dickens was born in Alabama and spent her young days in the southern states, so she adapted to the Southern accent. However, as a professional actress, she needed to move in and out of her accent. That was a hard battle for her, and she managed well enough.

The veteran actress Kim made her journey from Alabama to the big screen. Her hobbies include reading, photography, traveling, internet surfing, and listening to music. Kim is a huge music fan and grew up listening to old traditional music. Her favorite genre is country. She listens to country stations as she drives down the road. She prefers the older music and isn’t fond of the new, more contemporary tunes.

Dickens is a cat lover and has posted several photos of her pet on Instagram. The actress loves to travel, and her career has taken her to various US states. Kim is also into tasting different cuisines and loves Mexican food.

Like every other people, the actress also loves to chill on weekends and watch movies late at night. Her favorite actor is Richard Gere, and Angelina Jolie is her favorite actress.

The prominent actress Kelli has short blond hair and hazel green eyes. She is 5ft 6ins (1.69m) tall and weighs around 135lbs (61kg). She has a slim body figure and wears a bra size of 34B. Her vital statistics are 34-24-33. Regarding her clothing style, Kelli prefers casual looks, often wearing jeans, shirts, or T-shirts.

One could say that Kim Dickens had a pretty good acting career. Credible sources indicate that her contributions to films, TV series, and other side projects have contributed to her net worth. Her estimated net worth is almost $2 million. Kim’s girlfriend Leisha Hailey’s net worth is estimated to be around $1 million. The actresses are still active, so their net worth is expected to increase in the upcoming years.