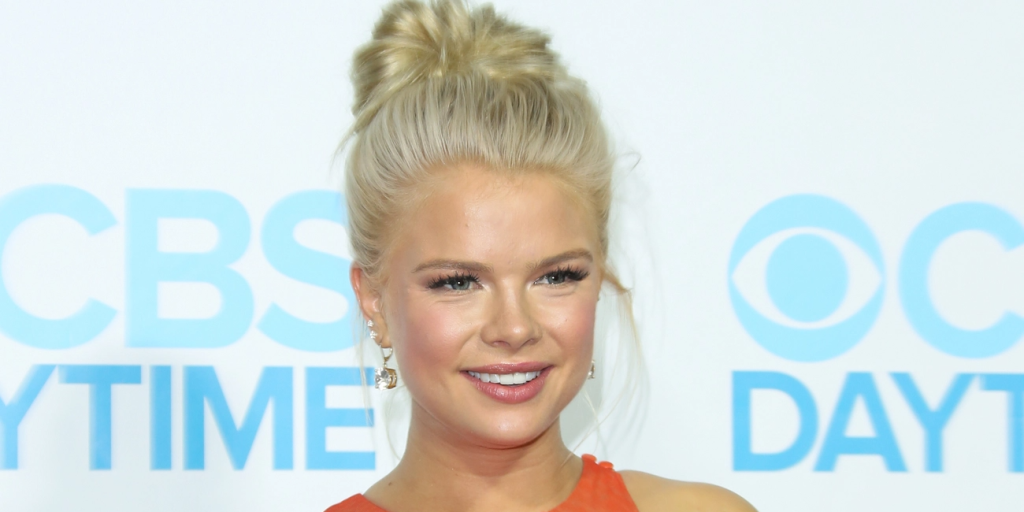 Who is Kelli Goss?

Kelli is an American actress, probably best known to the world as Courtney Sloane in the TV series “The Young and the Restless” (2013-2015), and as Vanessa in the TV series “United States of Al” (2021-2022), among other roles that she has secured so far in her career.

Kelli Amanda Goss was born on 1 February 1992 under the Aquarius zodiac sign, in Santa Clarita, California, USA, the daughter of Gerry Kenneth and Nancy Goss – she has brothers Whitney and Patrick Goss.

She hasn’t talked much about her early life, and as a result, there is no information about her educational background.

Kelli’s career started in 2007, when she was chosen for the part of Joy at 13 Years Old in the Primetime Emmy Award-winning TV comedy series “My Name is Earl”. She reprised the role of Joy two years later.

She continued to appear in TV series, such as “United States of Tara” (2009) as Adina, then she played Monique in the TV series “True Jackson, VP”, and in “Hannah Montana” she played Chelsea, all in 2009.

Kelli’s early hard work and dedication was rewarded in 2010, when she was selected for the part of Jennifer 2 in the TV musical comedy series “Big Time Rush”, and over three years appeared in 17 episodes of the popular TV series.

This made her rather famous, and she was able to secure a couple of other notable roles, as Kim in the TV series “Hollywood Heights” (2012), and Skylar Reid in the television movie “Sexting in Suburbia”, co-starring Liz Vassey, Ryan Kelley and Jenn Proske.

Her next role was as Courtney Sloane in the eponymous daytime soap opera “The Young and the Restless”.

She originated the role of Courtney, an undercover cop who develops a romantic relationship with Noah Newman; her character was killed off just a day before her and Noah’s wedding, but she received positive critiques for her on-screen work as Courtney.

Kelli next portrayed Heather in 33 episodes of the Primetime Emmy Award-winning comedy western-drama series “The Ranch”, with Ashton Kutcher, Sam Elliott, and Grady Lee Richmond in the lead roles. She was a brief love interest of Ashton Kutcher’s character, and once again received rave reviews for her work, but was again deprived of any award, however, the role was just enough to launch her to international stardom.

To speak further of her accomplishments, Kelli portrayed Ally in an episode of the TV series “Speechless” in 2017, then the gfollowing year she joined the cast of the TV medical-drama series “Grey’s Anatomy”, as Laura.

Most recently, she was selected for the part of Vanessa in the TV comedy series “United States of Al” (2021-2022), which follows the adventures of Al, an interpreter from Afghanistan who moves to Columbus, Ohio, portrayed by South African actor Adhir Kalyan.

The series received mixed reviews, primarily due to its humor, cliches, prejudices, and the fact that an Afghani character is played by an Indo-South African actor with a fake accent. However, the series also received high praise for its attempts to diversify television, and the pilot episode received a nomination for Outstanding Production Design for a Narrative Program.

Kelli appeared in 19 out of 29 episodes, and her character, Vanessa, was praised by fans, and many identified with her, as she is divorced and raising her daughter alone.

As of early 2022, Kelli Goss’s net worth has been estimated to be around $1 million, earned through her successful career as an actress, during which she’s appeared in 19 TV titles.

When it comes to her personal life, Kelli has been married to Justin Wilmers since 11 November 2021, the couple having dated for a few years. Her husband isn’t a celebrity but a litigation associate at Los Angeles-based Poole & Shaffery, LLP. He graduated from the University of California, Los Angeles – School of Law.

Back in 2020, her then-boyfriend suffered a terrible injury while snowboarding at Big Bear Mountain Resort, and spent a few days in a hospital with five broken ribs, a punctured and consequently collapsed lung, and bruised kidneys.

Kelli spent days and nights with him, sleeping beside him in a hospital bed. She made a rather emotional post on her official Instagram page about the accident and later experience.

In addition to her acting talents, Kelli is a prolific singer, and though she hasn’t pursued music professionally, she entertains her friends and family.

Kelli spends a lot of time with her friends on the beaches and at pools, and has been to such vacation destinations as Makena, Hawaii, Black Rock Beach, Maui, Waikiki, and several Californian beaches.