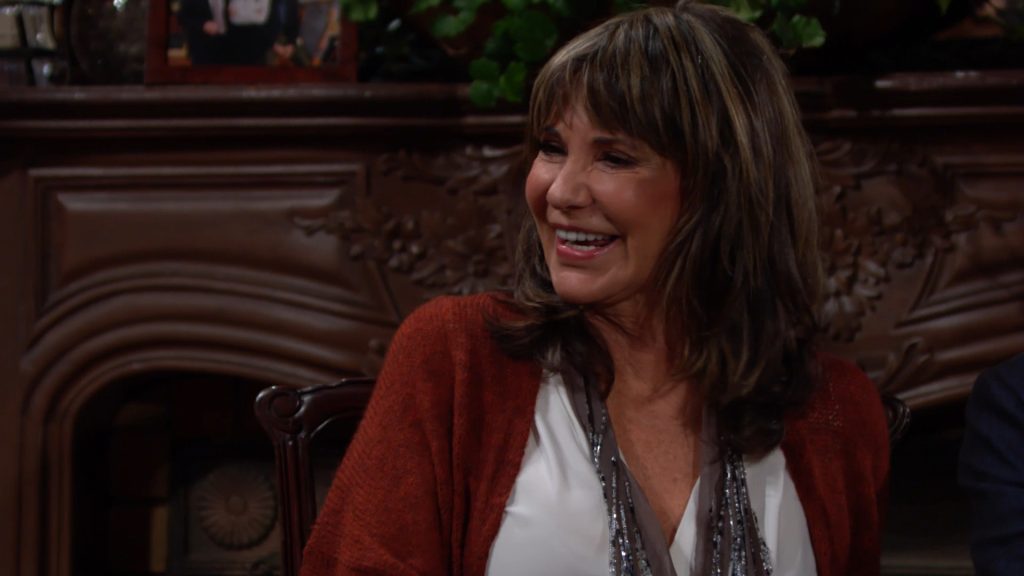 Who is Jess Walton?

Mary Jesse ‘Jess’ Walton was born in Toronto, Ontario, Canada, on 18 February 1949 – her zodiac is Aquarius, and she holds Canadian nationality. She’s an actress and film producer, with close to 50 acting credits to her name, while she’s perhaps known best for her portrayal of Jill Foster Abbott, one of the lead characters in the romantic drama “The Young and the Restless”, which has been airing since 1973 – Jess has been a member of the cast since 1987. It was created by Lee Phillip Bell and William J. Bell, today also stars Doug Davidson, Eric Braeden and Peter Bergman, and follows the Abbott and Newman clans from Genoa City; the soap opera’s won 298 of more than 1,000 awards for which it’s been nominated.

Jess was raised in Toronto by her parents, about whom not a lot is known as she respects their privacy; it’s believed that her father was the owner of his own small business, and that her mother was a housewife. She hasn’t mentioned having any siblings, which is why some of her fans believe her to be an only child.

Jess became interested in acting while attending Loretto Abbey Catholic Secondary School, and was 17 when she left home and became a member of a theatre company in Toronto; she was into a couple of other activities during her teenage years, including dancing, singing and playing tennis.

She matriculated in 1967, and two years later moved to Hollywood, Los Angeles, California USA, after having been offered a contract with Universal Studios.

Jess made her debut TV series appearance in the 1968 episode “Noises of Paradise” of the drama “Festival”, and the following years saw her appear in an episode or two of a couple of popular series, such as the western “The Guns of Will Sonnett”, the drama “The Young Lawyers”, and the mystery crime drama “The F.B.I.”

She gained recognition in 1975, when cast to play Theresa Defusto in the episode “Shootout” of the critically acclaimed action crime drama “Starsky and Hutch”, created by William Blinn, and which starred David Soul, Paul Michael Glaser and Antonio Fargas. It follows two police officers as they’re riding in their Ford Gran Torino and catching criminals, the series aired from 1975 to 1979, and won four of the 10 awards for which it was nominated.

Jess could then have been seen making a guest appearance in many series, including the mystery crime drama “Baretta”, the action crime drama “The Streets of San Francisco”, and the crime drama “Switch”.

Between 1985 and 1987, she played Kelly Harper in the romantic drama “Capitol”, created by Elinor and Stephen Karpf, and which starred Constance Towers, Debrah Farentino and Rory Calhoun. It follows the feud between two political families, the Cleggs and the McCandlesses, the series aired from 1982 to 1987, and won two of the 20 awards for which it was nominated.

Since 1987, Jess has been focused solely on shooting for “The Young and the Restless”, and hasn’t appeared in any other TV series.

Jess made her debut film appearance in the hit 1970 romantic drama “The Strawberry Statement”, directed by Stuart Hagmann, and which starred Bruce Davison, Kim Darby and Bud Cort. It follows a college student who’s joined a group of campus protesters just to meet girls, while he’s now become part of a violent confrontation with the police; the movie was nominated for three awards.

The year 1974 saw her portray the lead character Elaine in the drama “Monkeys in the Attic”, written and directed by Morley Markson, and which also starred Jackie Burroughs and Louis Del Grande. It follows the lives of married couple Elaine and Frederick, and the couple Wanda and Eric.

Jess has since appeared in only six movies, with three of her most recent roles having been in 2005 in the short adventure comedy “The Return of the Muskrats” and the short musical drama “Paper Bags”, and the 2018 romantic drama “Christmas with a View”.

She was featured in the 2013 episode “40 Years of Young and Restless” of the documentary series “Marie”.

Jess has made a guest appearance in a number of talk-shows, most recently in “Hour Magazine”, “SoapTalk” and “The Talk”.

A post shared by The Young and the Restless (@youngandrestlesscbs)

Jess is more or less secretive when it comes to sharing the details of her love life with her fans, but it’s known that she’s been married twice. She exchanged vows with American director and actor Bruce Davison on 20 May 1972, in a small ceremony attended by only the closest of their friends and family members, but the two divorced in the following year.

Jess married her second husband, founder of the non-profit organization Grief Recovery Institute and author John James, on 20 December 1980; she’s revealed that she was mostly into rock ‘n’ roll type of men prior to meeting John, but still fell in love with him. Jess gave birth to their son Cole W. James in 1981, and was the step-mother to his daughter from a former relationship or marriage. Her and John’s marriage ended when he passed away in August 2021.

It’s also widely known that Jess was once in a relationship with one of the managers of Canadian-American singer-songwriter Roberta Joan ‘Joni’ Mitchell, and the folk rock ‘n’ roll supergroup Crosby, Stills & Nash.

She hasn’t mentioned any other men whom she’s perhaps been with, so as of August 2022, Jess seems to be single, has been married twice, and has a son with her second husband John James.

Jess was physically highly active in her 20s, 30s and 40s, and had multiple training sessions at the gym every week, mostly because it was important for her acting career to stay fit; she no longer works out, but is still following a strict diet, meaning that she avoids eating sweets and fast food.

Jess is highly active on Instagram, and is today followed by more than 60,000 people, while she’s uploaded nearly 400 pictures onto the network, the majority of which feature her during her everyday life.

She’s a huge lover of animals, and has donated money to a couple of animal shelters; her pet dogs can be seen featured in many of her Instagram pictures.

Jess is into travelling, and her acting career’s taken her to nearly all of the US states, while she’s also been to various countries all around the world, with her dream travel destination being Lyon, France.

She has her own favorite actors and actresses, some of whom are Jim Carrey, the late Robin Williams, and Meryl Streep, while a couple of her favorite movies are “Bruce Almighty”, “Good Will Hunting”, and “Good Morning, Vietnam”.