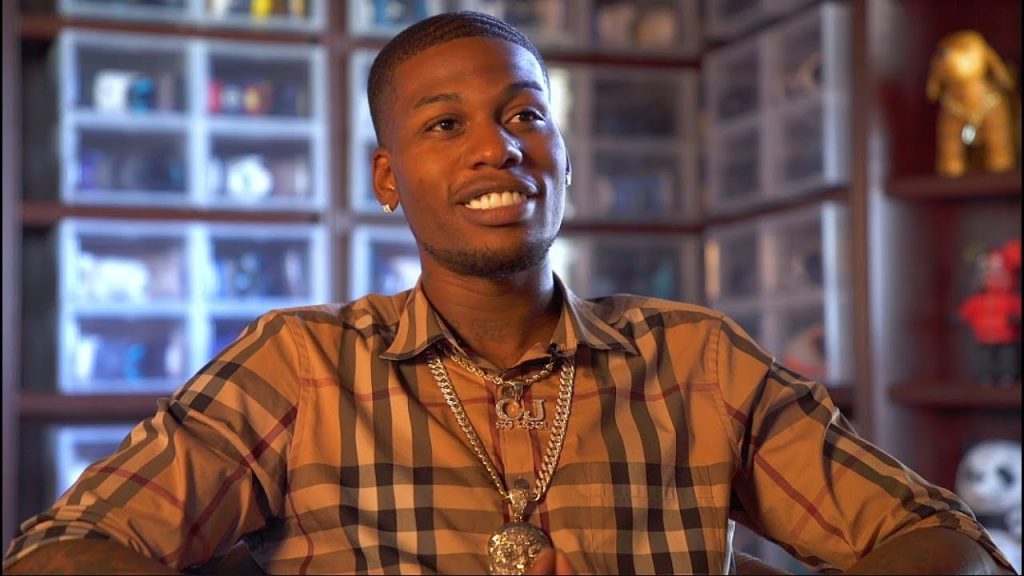 How old is CJ SO COOL? Age, House, Net Worth, Girlfriend, Parents

CJ So Cool is a famous YouTuber and musician, who gained popularity with his reactionary and prank videos. He has around 8.85 million subscribers on the channel, captivating his audience with entertaining content.

Cordero James Brady was born on 29 March 1989, in Gary, Indiana USA. His father went to prison when CJ was still young, and ended up dying behind the bars. His mother was a drug addict, which meant that she was unable to take care of her children, so giving them up for adoption.

CJ has four siblings: Tashanya Tyrel, Kenneth, Shamithya, and Anthony “Jinx” Brady. According to the YouTuber’s interview with the channel BeforeTheyWereFamous, Tashanya has a different father, yet other details about her life are unknown. Anthony is also a famous YouTuber, who inspired CJ to pursue a career as a YouTuber, while Shamithya and Kenneth maintain more discrete lifestyles.

CJ and his siblings were raised by their grandmother and great-grandmother. His grandmother was the only one making money, but worked at a minimum wage job, and was a gambler. The children had to experience the hardships of being poor, sharing a single room between them. CJ believes that their great-grandmother resented them because she had already gone through parenting, and didn’t want to do it again, however, she didn’t have any other option. Her style of upbringing was strict – CJ had to do schoolwork and house chores to avoid her scolding.

The YouTuber started singing at a young age. He also played baseball but had to quit after being hit in the face, the serious injury indicating to his caregivers that sports wouldn’t be safe for him.

CJ grew up in a dangerous neighborhood, and was exposed to violence when he was still young. He posted a video while visiting his hometown, mentioning that once he saw a 13-year-old boy kill an older man. Being ambushed at school by local thugs was a common thing at his elementary school. Most of his classmates were problematic, frequently picking fights with other students and even teachers.

When CJ was in 9th grade, he met a priest, Tracy Morgan, who served at Carter Memorial Methodist Church. Tracy counseled him and supported him financially, giving the YouTuber hope for a better future.

Initially, CJ studied at Theodor Roosevelt High School, which was also a violent place for him, but he wasn’t old enough to make decisions about his education yet. During this period, he got his first job at Denny’s as a dishwasher, allowing him to look after himself, and look put-together at school.

Eventually, CJ transferred to William A Wirt High School which wasn’t violent and allowed him to prosper. He became the cool kid quite quickly and everyone called him CJ. At this point, he was working at Chuck E. Cheese, earning $15 an hour, enabling him to afford better clothes and maintain popularity. He matriculated from high school in 2017, and went to US Navy boot camp shortly afterwards.

He received harsh treatment at the boot camp, which meant that he had to withstand humiliation and extensive training, but the supervisors couldn’t break his spirit, and he overshadowed his peers. Later, he became the leader of his division, and even joined the Navy’s presidential underguard. He took a short break to return to his hometown, and joined another boot camp when he returned to Washington D.C. He was a member of the casket-bearing team, which comprised strong men, meaning that CJ had to train with heavy weights to keep up with his mates, but as a result he was injured ,and was unable to occupy leading positions. He was sent off to work on a ship in Norfolk, Virginia, which involved compensated overtime, and overall conditions were terrible. CJ was relieved when he was fired.

He then enrolled at Purdue University, Calumet to study criminology and become a police officer. Columbine High School shooting coincided with his studies, along with an incident in which a student committed suicide in CJ’s dorm. Such alarming events forced the university to take additional security measures, which involved conducting random inspections. While examining Cordero’s room, they found a gun in his drawer, and so expelled him.

Career as a YouTuber

After that experience, CJ started working as a dealer for various casinos. He also launched a YouTube channel in 2014, but which didn’t get him anywhere. When his brother Anthony, Jinx returned from the US Air Force, and they started living together in Los Angeles. Jinx started working on his YouTube Channel, gaining massive recognition in a few months. After he attracted more than 700,000 subscribers, and was earning about $12,000 a month, CJ started seeing the financial potential of YouTube. He started appearing in his brother’s videos frequently, and Jinx’s fans eventually requested a separate channel from CJ, and he knew it would be foolish not to listen, so he started uploading videos regularly.

Initially, his content revolved around reactions to other YouTubers’ videos. When he earned his first $3,000 check from YouTube, he quit his job at a casino, to concentrate on YouTube. Eventually, he started offering more diverse content, posting prank videos, showing off his shoe collection, and participating in various challenges. His fans and subscribers are now called “Wolfpack” and “Cool Kids”.

Even though CJ became popular quickly, his path to fame wasn’t always smooth. In 2018, he was involved in a scandal that resulted in the temporary suspension of his YouTube channel. He was accused of abusing his kids by putting laxatives in their food for the sake of making prank videos. He also filmed his wife who was barely conscious after a miscarriage, and commented with inappropriate jokes. CJ received widespread criticism for such actions, yet it didn’t impact his career as a YouTuber.

In 2016, Jinx collaborated with CJ on the song “Wanna Do” in the third installment of his series “Rap of All Trades Mixtape”. In 2017, CJ released his independent single “Get a Bag”, which reflected his everyday life, and revealed his emotions. It was followed by the track “Salty”. Later, he collaborated with Royalty on the songs “Movie Clips” and “Fuego”.  His most recent tracks “Man Now” and “Bag Chasing” were released in 2020.

When CJ was still working as a dealer at Flamingos in Las Vegas, his tables were always filled with customers. since he knew how to attract the crowds. In 2012, he was celebrating his success in the VIP section of the restaurant Planet Hollywood, when he was suddenly approached by a woman who asked him if she could introduce her daughter Royalty to him. CJ agreed, and subsequently took Royalty out for dinner. They fell in love, and married in 2013.

Charlene Young-Johnson, or Royalty, is also a YouTuber and an entrepreneur. She runs her channel LifeWithRoyalty, with approximately 1.35 million subscribers. She mainly uploads vlogs, sharing more details about her children’s lives, and talking about personal problems she encounters from time to time. She also operates Royalty of Queens – a beauty shop that sells hair and make-up products, Cambodian hair, and various other accessories.

CJ and Royalty have twins together: Cordayah and Cordero Jr. Royalty has three children from her previous relationship – J’aaliyah, Leonidas, and Karnation – but whm CJ raises as his own. CJ has a daughter Camari, with Ni’Kee Lewis, who lives with her mother but visits her father frequently.

CJ is 33 years old. His height is approximately 5ft 11ins (181cm). and his weight is around 165lbs (75kgs). He has brown eyes, neck-length dark hair, a short mustache and a beard. The YouTuber usually wears designer clothes, frequently sporting names such as Louis Vuitton, Burberry, Celine, Gucci, Amiri, and others. He likes accessorizing his outfits with luxury sunglasses and jewelry, in particular rings, bracelets, and statement necklaces.

As of mid-2022, CJ’s net worth is estimated at close to $7 million, with a monthly income of over $50,000, and an annual income of around $600,000, primarily through YouTube, but he also sells his merchandise, and engages in brand collaborations both in his videos and on Instagram. He also owns a mega-mansion in Las Vegas valued at approximately $4.4 million.

CJ’s wife Royalty’s net worth is estimated at close to $3 million, which she’s earned as a YouTuber.