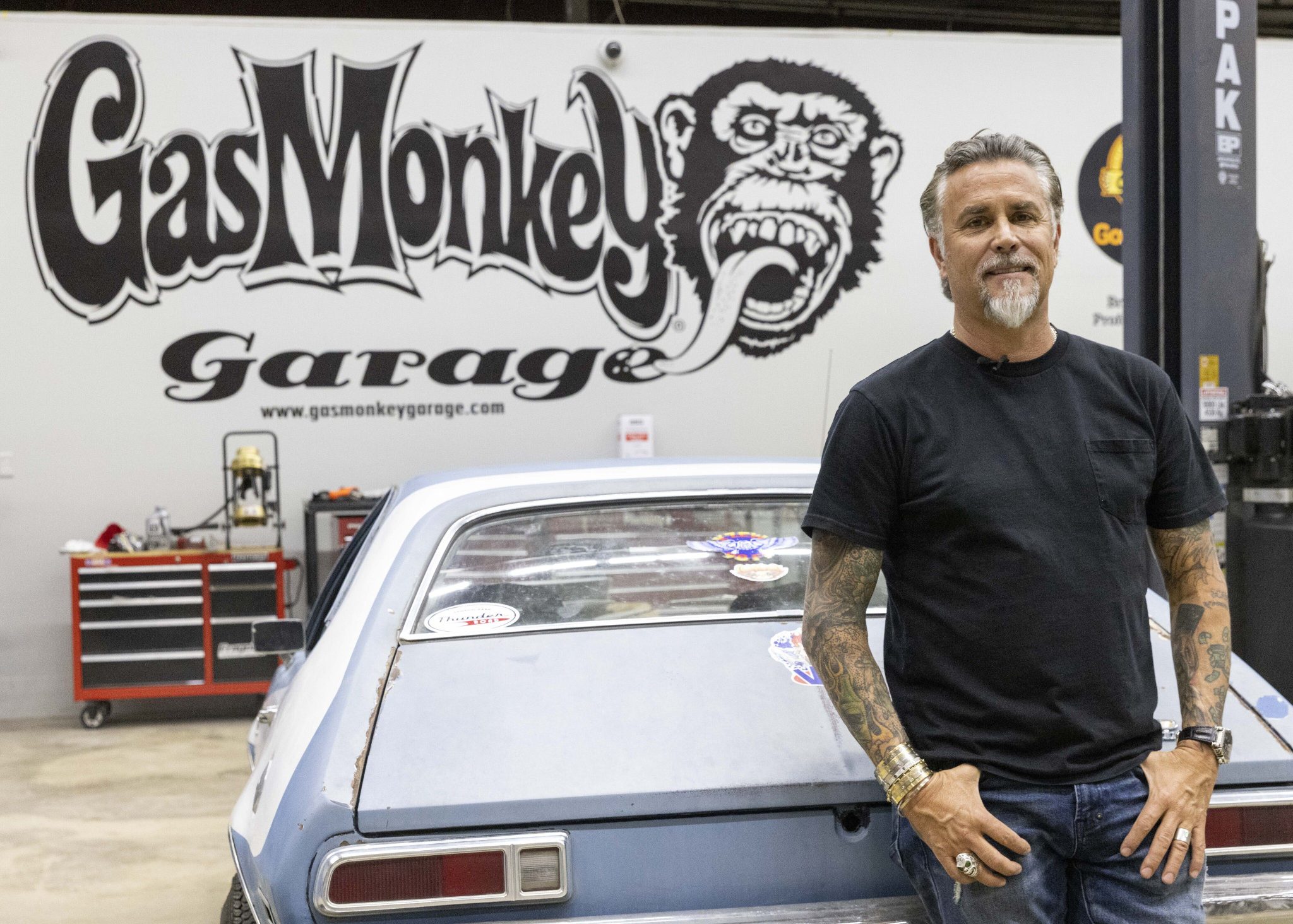 Gas Monkey Garage Relationships between them

The now-defunct reality TV show “Fast N’ Loud” filmed the daily comings and goings of Gas Monkey Garage (GMG) and its crew, who specialized in restoring and selling old vehicles for a profit. The show, which was produced by Pilgrim Studios, premiered in June 2012, and officially ended in late 2020 after months of speculation and 16 seasons.

It’s been rumored that the rocky relationships between the mechanics at GMG, added to and often exacerbated by Richard’s abrasive personality, led to the show’s cancellation. No strangers to explosive on-screen spats, viewers would be forgiven for thinking that the “Fast N’ Loud” cast were seasoned actors, due to the number of scripted conflicts they weathered through each season.

As the proprietor of GMG and protagonist of “Fast N’ Loud”, Richard was the driving force behind both the car shop and the series. Born and raised in Texas, the Eastern Hills High School student tried his hand at a printing and advertising company, which he sold five years after its creation to focus on his next business venture: GMG. With a worldwide clientele and plenty of publicity, the Dallas-based garage gained a cult following.

However, the charismatic businessman’s tumultuous personal relationships left netizens wondering if he was the cause of almost every conflicton “Fast N’ Loud” , both scripted and genuine, . His first marriage in 1993 to high school sweetheart Karen Grames lasted just one year; five years later, he walked down the aisle a second time to tie the knot with Suzanne Marie Mergele.

Although Richard and Suzanne’s union appeared to be more stable, the couple divorced after ten years and remarried in 2015… Just to call it quits definitively in 2019. Richard, who clearly had no intentions of staying on the market for long, married his third spouse, Katerina Deason, just a year later, and the whirlwind relationship has been plagued by rumors that the TV personality was unfaithful to Suzanne with his current wife.

As an entrepreneur and media personality, Richard is hypervigilant when it comes to his public image – but still suffers the occasional PR hiccup. For example, two of his mechanics were allegedly fired for allowing a fan with cystic fibrosis to pose with Richard’s precious Rolls-Royce. The manager on duty and Tom Smith, one of the mechanics involved in the incident, began arguing, leading to Tom and the other mechanic, Jordan Butler, being fired on the spot.

Before being fired by Richard, Tom was known as one of GMG’s most talented but unruly mechanics and even described as a problematic employee, with sources close to the show claiming that the staff all had their own ways to handle him. Incensed by the injustice, Tom took his story to TMZ. It was reported that Tom and Jordan had already been hired at another car shop… which got its own spin-off show, “Misfit Garage”, executive produced by none other than Richard himself.

Not only is the Texan one of the producers, but he’s also the garage’s landlord and financial budgeter – so we’re inclined to believe that Tom and Jordan’s dismissal was staged to drum up viewing figures for the spin-off show, and that the popular mechanics actually have a good working relationship with Richard.

Then, what about Aaron Kauffman? After working together for 14 years, the master mechanic left the show and GMG behind, and seemed to have little interest in maintaining his apparent friendship with Richard. Aaron, also known as the Bearded Wonder, famously said that the last five years of working with Richard had felt like 20, and it was revealed that he was moving on due to grueling deadlines and other issues with the show’s producers.

Although the episode detailing Aaron’s departure didn’t air until March 2017, Aaron touched on his friend’s decision to leave in a December 2016 blog post. In what many interpreted as a parting shot to his former business partner, the Texan said: “It is a big hit to GMG, but please note that it would be an insult to everyone here at Gas Monkey who has been putting in the work these past few years to say that we can’t do it without him.”

Aaron and Richard first met in the late ‘90s, with the latter asking the Bearded Wonder to work for him after seeing his impressive automotive skills. Aaron soon became GMG’s lead mechanic, and gained international fame when “Fast N’ Loud” aired in 2012, as well as a loyal fanbase, who preferred his laidback personality to Richard’s louder-than-life ways.

It’s undeniable that Aaron and Richard made an excellent team – one procured and sold the cars while the other repaired them and returned them to tip-top shape. Sadly, all good things come to an end, and when Aaron cited “growing personal issues” and “professional differences in opinions” as some of the reasons for his departure, many fans blamed Richard for not trying to convince him to stay.

Christie Brimberry, the shop manager and leading lady at GMG, is one of the few “Fast N’ Loud” cast members who had a great relationship with Richard, both on- and off-screen. Born in March 1972, the vivacious blonde has been credited with proving that women can not only survive but thrive in male-dominated spaces – and attracting female viewers who would’ve been bored by the show otherwise.

Despite having approximately half a million followers across various social media platforms, Christie isn’t particularly interested in media fame, and has shied away from the small screen since “Fast N’ Loud” ended. Thanks to her relatively frugal lifestyle and online brand endorsements, the former TV personality enjoys a comfortable existence with her husband Darren, who just happens to be Richard’s hairstylist.

The mother of six, who is said to be worth almost $2 million, wasn’t actually the only woman on “Fast N’ Loud” – Richard’s sister also made a few sporadic appearances. However, she was one of the most beloved cast members, which is why her harrowing health journey was followed by millions of concerned viewers.

In October 2016, following months of chemotherapy, the office manager’s voice box was damaged after the surgical removal of a cancerous lymph node from her thyroid. Christie’s voice suffered no permanent damage thanks to radiation treatment and plenty of bedrest, and in December 2017, GMG’s Facebook page congratulated her for being completely cancer-free, much to the delight of fans. The shop manager sometimes described herself as a “zookeeper” but previously said she’d never leave the show, thanks to the rapport she shared with her workmates; however, the current state of her relationship with Richard and the rest is unknown.

Despite not being a recurring cast member on “Fast N’ Loud”, Jesse James deserves a special mention thanks to his feud with Richard. The “Outlaw Garage” star and GMG mogul’s strong dislike for each other dates back at least a decade, nearing boiling point when Jesse dropped a special delivery off at Richard’s garage in 2012.

With help from his Bandidos Motorcycle Club friends, Jesse delivered a huge pile of horse manure and left it on the driveway of GMG along with a handwritten note. For some reason, producers of “Fast N’ Loud” decided to record the scene, possibly to stir up controversy in the first season of the show. At the time, Jesse was notorious for his divorce from the actress Sandra Bullock, and for being spotted out and about wearing Nazi insignia.

The duo first clashed during a bike build-off on “American Chopper”. With Richard and Jesse on opposing teams, things turned ugly as the competition heated up, and ended up with the two reality stars insulting each other’s families, partners, and more. Over the years, Richard and Jesse have wasted no opportunity to verbally attack each other, and it doesn’t look like they’ll be extending olive branches anytime soon.

Although Richard is a controversial figure in the reality TV landscape due to his business practices and various scandals, Jesse is outright loathed by many. The University of California alumni, who played as outside linebacker until injuries forced him to take a step back from sports, opened West Coast Choppers at the age of 23, and made his TV debut in Discovery Channel’s 2000 documentary “Motorcycle Mania”.

From publishing magazines to selling clothing and firearms, Jesse is an aspiring entrepreneur who perseveres despite many failed ventures. Something else that the motorcycle enthusiast has in common with Richard is his rollercoaster personal life – after divorcing his first wife Karla James, the mother of two of his three children, Jesse’s second marriage to the adult actress Janine Lindemulder lasted just two years.

Things began looking up for Jesse when he married Sandra in summer 2005, but everything went downhill for the couple when several women came out of the woodworks in early 2010 with bombshell revelations about their affairs with the “Outlaw Garage” star. At the time, Sandra was forced to cancel her promotional appearances for “unforeseen personal reasons”, and Jesse soon issued a public apology. Despite James apologizing and checking into rehab to try and fix his floundering marriage, Sandra filed for divorce in late April 2010.

Many fans wonder what the main “Fast N’ Loud” cast members are doing now. Some are pursuing new professional ventures, while others have returned to TV. It’s also alleged that Discovery could fine them $25,000 if they speak negatively about the network, which might explain why there haven’t been many juicy tell-all interviews from the GMG employees.

One possibility that’s been discussed at length by former “Fast N’ Loud” viewers is that Richard disliked being outshone by Aaron on his own show, and ultimately forced him out. Whatever the case, Aaron is now working on his true passion – restoring and modifying big cars, namely vintage Ford F100s.

The mechanic also has his own YouTube channel, and regularly entertains his fans with car-related content on other social media platforms such as Instagram. Currently residing in Colorado, Aaron has been participating in racing events lately, such as the SIERRA Rally Experience, and has been focusing on golf cart modification in his spare time. With almost 900,000 Instagram followers, the master mechanic is flooded with online brand endorsement deals and sponsorships to fall back on, if he ever needs that support.

Meanwhile, Christie’s Instagram account was hacked in early summer 2022. The unscrupulous hackers sent Christie an email demanding she promote their bitcoin company if she wanted her account back, but thanks to the blonde’s loyal fanbase who reported the incident to Instagram, she was able to access her profile in under two weeks. Unfortunately, the hackers had time to upload several posts in which they imitated Christie, and did some self-promotion.

A few months earlier, she celebrated her 50th birthday surrounded by friends and family. The youthful-looking social media personality has also denied claims that shes broke, going through a divorce, or suffering from new health issues.

As for Richard, the businessman is busy juggling GMG, a YouTube channel, and a bar and grill amongst other things. The charismatic TV powerhouse also claims to be selling his entire car collection, which he’s dedicated a decade of his life to, and has invited interested buyers to come and see the sale which will last seven days. These promotional events, as well as the $500 cash giveaways Richard often treats his clients to, help keep his name in the place and drum up some much-needed positive publicity.

Often by Richard’s side is his glamorous wife Katerina, who was most recently spotted with the Texan at the Sturgis Motorcycle Rally.