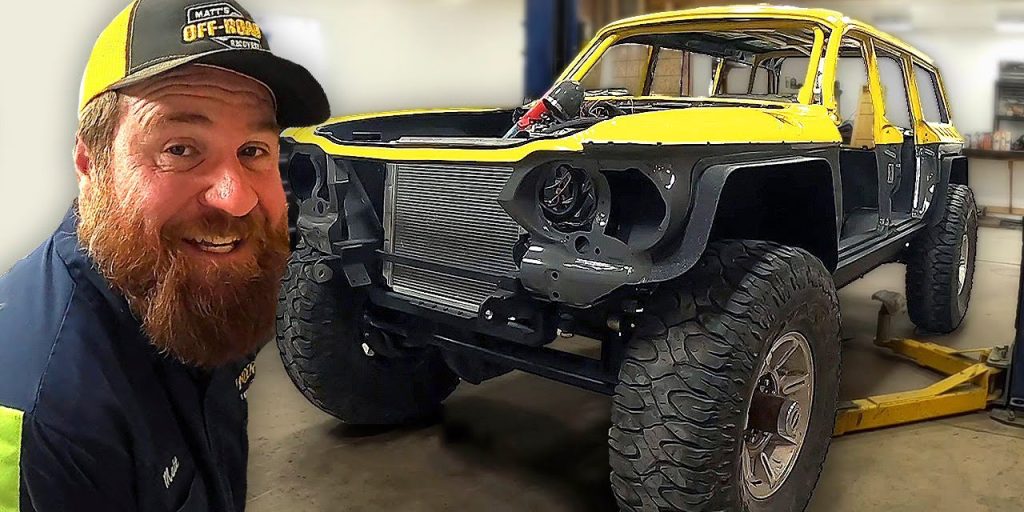 If you are into off-roading, you have probably wondered what would happen if you got stuck in the middle of nowhere and had no one to ask for help? That is where “Matt’s Off Road Recovery” comes into play to save the day, a YouTube channel featuring towing, recovery and rescue videos boasting over a million subscribers. Interestingly, who would’ve thought that towing trucks and cars might become famous on YouTube, and garner such a loyal fanbase. The channel currently has over 430 videos which have attracted over 336 million views.

When was the channel launched?

Matt launched the channel in March 2019 with the video entitled “The First Recovery Video Ever.” The footage is a 53-second introduction to his company, team, and their services, setting the direction of his YouTube channel. Since then, Matt has been uploading many videos as he rescues different models of cars, trucks and other vehicles.

A post shared by Matt's Off Road Recovery (@mattsoffroadrecovery)

Who is behind the “Matt’s Off Road Recovery” channel?

The man behind the channel, Matthew David Wetzel is a towing professional, born in the US and the co-owner of the successful towing company Winder Towing, in Hurricane, Utah. According to reports, the company is his family-owned business founded by Harlan Winder in 1981, which he later revolutionized. Matt offers his services for rescuing vehicles, and while doing so, he films the process and then posts on his channel, which has displayed exponential growth popularity-wise since launching.

By filming these captivating videos, Matt has managed to attract a wide range of viewers and clients who can witness vicariously the services he provides, and also boost his business.

Regarding his personal life, he’s been married for over 17 years to an unknown woman with whom he has eight children.

However, since he’s not so keen on sharing private details about his life beyond his channel and towing company, nothing is known about his wife and children.

What is the secret behind his channel’s success?

Most YouTubers struggle to launch their channel, and obtain a colossal fanbase. Interestingly, that was not the case with “Matt’s Off-Road Recovery,” as he reached the golden YouTube milestone – 1 million subscribers – in three years. So naturally, many wonder what the catch is?

Towing and rescuing vehicles off-road is a particular and unique niche that attracts car enthusiasts, and a wide range of other viewers who enjoy the thrill and suspense of rescuing a car from a seemingly unreachable place.

However, even though the platform has produced it all regarding content, the towing adventures are still unexplored and relatively rare on YouTube in Matt’s format, which brings us to another point. All of his videos are very well put together and engaging, with the addition of Matt’s friendly persona and positive attitude.

What is the Insurance Fraud?

Since the news about Matt’s alleged insurance fraud resurfaced in November 2021, his fans became worried about what would happen with Matt and his channel. So what are the charges?

There was a problem with particular tows that were billed to the AAA in Utah. According to the investigators’ claims, Matt’s company illegally obtained more than 15,000 recoveries from the AAA in the period between January 2019 and August 2020.

Court documents allege that he filed “numerous claims” with “material representations” of the jobs for which he sought compensation, such as the fraud wherein Matt’s company billed AAA $2,8000 to tow three cars.

Later, one of the car’s owners revealed that the vehicle was never actually towed, disclosing that Matt had told him to submit three separate tow claims, instead of paying to deliver construction material.

In another case, an owner who was not a member of AAA called Matt to retrieve his car stuck in Apple Valley, Utah, and tow it to his home in Washington County. While Matt’s team was providing the service, Matt allegedly told the owner to join the association and then file a claim. AAA reportedly paid nearly $500 for vehicle recovery from Las Vegas, which never happened according to the investigator’s claim.

A third instance was mentioned in the documents regarding a utility vehicle, Polaris RZR, which was ultimately featured on Matt’s channel. In the videos, fans can see Matt hauling the vehicle and talking to the owner after the recovery. The owner disclosed that he used one of his friend’s AAA memberships to cover the tow, even though insurance companies do not cover towing of such vehicles, including side-by-side vehicles.

What did Matt say?

In December, officers contacted Matt about the frauds and disclosed that he took responsibility for the claims, saying they were ‘wrong on the front end, but fair on the back.’

Regarding the delivery of building materials, Matt revealed that he rendered other services to the particular individual during the call, such as lockout services and towing calls. Additionally, after working with the individual on several occasions, Matt reportedly asked the owner to make a claim to AAA.

Matt also shared information about other arrangements with clients, in which the provided service was not immediately charged to the person or AAA. During the towing process or later, Matt asked the owner to turn in a claim to AAA as a way of covering the services his company provided. While conversing with the officers, Matt said that “he never turned in a job that did not have a legitimate service tied to it’.

A media outlet reached out to Matt and his attorney, Jason Velez, to ascertain his side of the story. At the same time, his lawyer said that Matt had assisted the people of Hurricane his entire life, through ‘selfless acts of giving back to the community and coming to aid all those who needed him.’ The attorney added that Matt was working closely with the police to clear up the misunderstanding that had resulted in these charges.

Will Matt go to jail?

Besides conversations with the investigators, Matt has remained remarkably silent regarding this alleged scandal. According to the Utah state statutes, insurance fraud is a second-degree felony punishable by one to 15 years in prison, a fine ranging to $10,000, or both. So if Matt is convicted, that means he would face jail time or a hefty fee.

However, following the case’s development, in March 2022 Matt pleaded no contest to making false claims to AAA, meaning that he accepted the conviction but avoided the admission of guilt.

His attorney disclosed that his plea meant that the dispute was over the process and not the substance of the claims.

In the end, Matt was ordered to serve 18 months probation and pay fines, which included over $15,000 to AAA and $1,745 to Utah’s insurance fraud division. Matt’s attorney admitted that there were some ‘technical violations’ in the claims, but disclosed that Matt’s behavior corresponded with the attitude AAA had been known for. The attorney also added: “Matt will continue to serve his community, the people of Hurricane and southern Utah as he always has, coming to the aid of all those who need him. He plans on fully complying with the probation agreement, seeking early termination of probation and other benefits as set forth therein.’

The Utah Attorney General’s Office spokesman, Richard Piatt, said that he and prosecutors were happy with the outcome. He disclosed: ‘Because Mr. Wetzel admitted guilt, agreed to pay full restitution, and comply with the terms of his plea agreement, we’re satisfied that justice has been served in this case.’

What will happen with the channel?

Matt continued to regularly upload content to his channel, despite the scandal and charges. He’s very active and creates content all the time, posting over 40 videos in the last four months. Furthermore, it doesn’t seem that this run-in with the law has affected his popularity on YouTube and demands for his videos. On the contrary, with publicity around the charges, his subscriber’s count has only grown.

Judging from his channel and recent activities, Matt has no plans to retire, end the towing business or delete his channel.

What is Matt Wetzel’s net worth?

According to the latest sources, Matt’s net worth is in the range of $4 million, earned through his career as a professional tow truck owner. In addition to his towing company and YouTube channel, Matt earns through his merchandise, which features t-shirts, ropes, and toys.

Is Ed related to Matt?

One of the most notable members of Winder Towing is 81-year-old worker Ed, often featured in Matt’s videos. Many thought that Ed might be Matt’s father, which is actually untrue. Reportedly, when Matt bought the garage property from which he has been operating, Ed was living there, and Matt couldn’t simply evict him as he would become homeless. Over time they became friends, and Matt even offered him a job at his company. If you watch Matt’s channel, you might have noticed that Ed is very knowledgeable regarding mechanics and towing, and often shares his unique insight.

Who is Lizzy from Winder Towing?

If you are a fan of Matt’s channel, you must have come across Lizzy, a technical advisor in towing and excellent with mechanical items. While many wonder whether Lizzy is Matt’s daughter, the answer is –no! – Lizzy is the daughter of Matt’s old roofing business partner employed at the company.

Lizzy is a very talented young lady not only when it comes to working on and towing cars; interestingly, she plays piano, as seen on Matt’s Off-Road Instagram account. Additionally, she is a great fan of animals, and her puppy Turbo was featured on the channel and Instagram page.

In one of the videos, Matt answered some of the most frequent questions that he receives from his fans. Asked by his fans what were these people featured on his channel doing in such remote and challenging locations, hinting that they were definitely up to no good, Matt said: ‘This is a tourist destination and we have amazing land features. People come from all over the world to see it. They rent a car, they see something on the internet that they want to see, type the location into their GPS, and they drive their car until it gets stuck.’

Why did Matt pick a Jeep Cherokee to do off-road recovery?

Matt landed on his jeep because he likes its packaging, its spacious dry storage, and its light. He added that it has an excellent drivetrain that he can keep running as it is easy for him to modify and upgrade for whatever he needs. Also, Jeeps are very affordable compared to many other vehicles. Matt disclosed that it’s not the absolute best tool for the job, however, according to him, having been in the business for decades, it does best the jobs he called to.

How much does Matt’s towing cost?

It is definitely one of the most frequent questions, especially considering the off-road recovery in question, which is more challenging than on-road. However, Matt refused to answer the question and blamed it on the signal-a true joker.

On the other hand, according to the sources, the price of the off-road recovery depends on the car’s situation and location. For example, if your vehicle is stuck in a forest not too far from safety, it might cost you up to $500. However, if your car is stuck in generally inaccessible or hardly accessible location, such as a river or lake, that might cost you $1,000.

Given that Matt’s channel mostly features these types of extreme recoveries, one might infer that the price of his towing usually might cost around the latter. Matt did reveal that they get paid by the hour, however, he didn’t disclose the exact amount. An additional factor affecting the price is the location to which the car needs to be towed.

Matt has launched several accounts on different platforms for his company. On Instagram, he has nearly 120,000 followers, while on Facebook almost 40,000 followers. In addition, Matt is active on TikTok, which boasts over 30,000 followers.