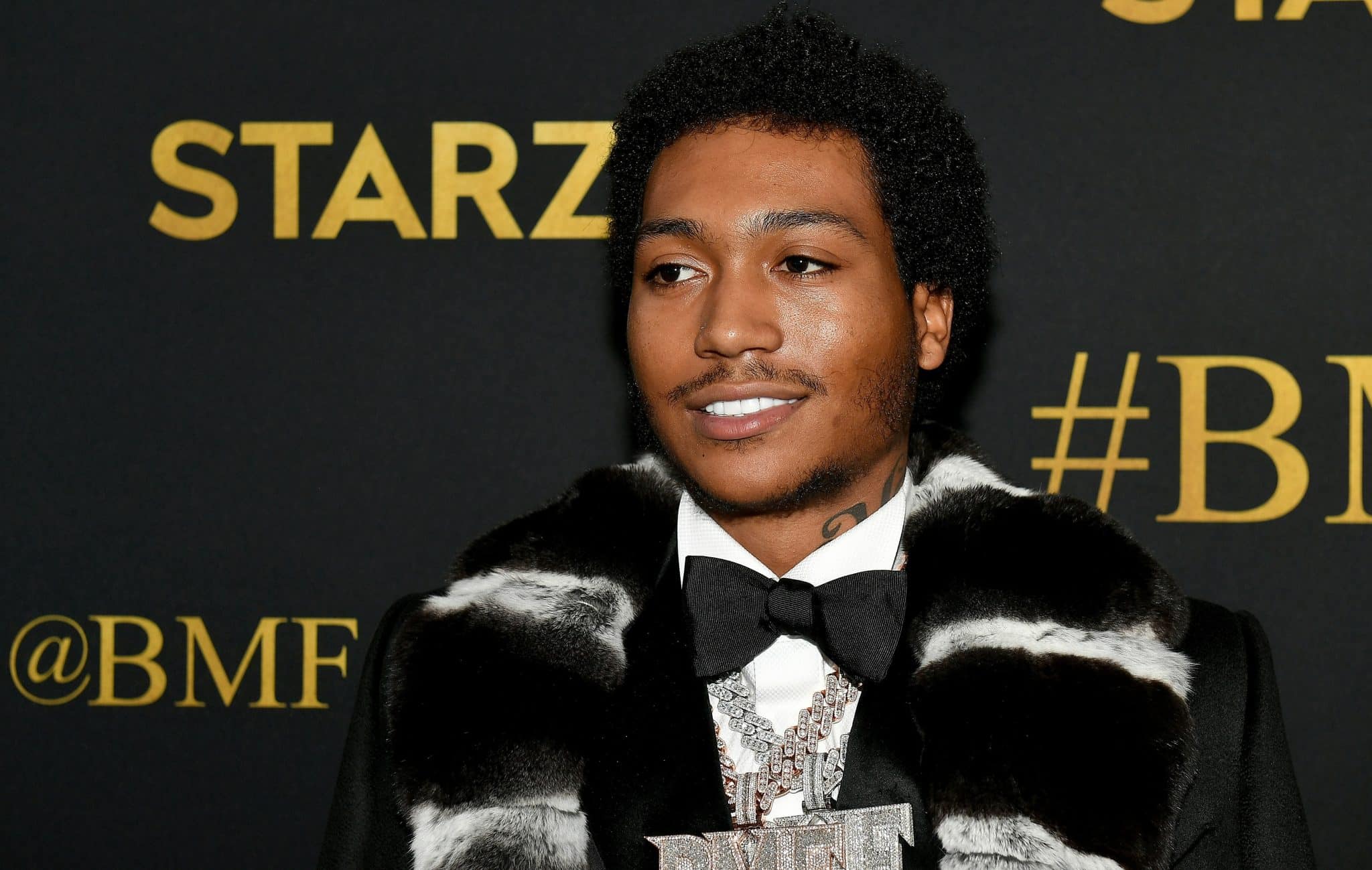 Demetrius Flenory Jr. is an American rapper and film actor, perhaps best known for playing the role of his father, Demetrius Flenory Sr. in the crime drama “BMF”, based on the true story of notorious organization, Black Mafia Family.

Demetrius “Lil Meech” Flenory Jr. was born under the star sign of Taurus on the 22nd April 2002, in Detroit, Michigan, USA, to Demetrius Flenory Sr. and Latarra Eutsey. His father is the co-founder of Black Mafia Family— the infamous organization that dealt in money laundering and drug trafficking— while his mother is a former flight attendant with Delta Airlines. His mother was also reportedly involved in Demetrius’ business, managing some parts including BMF Entertainment.

Apparently, the boy was too young to understand what his father was doing at the time, and its consequences. He recalls, ‘… I didn’t understand what money really was. I was too young, you know, but I knew who my dad was. I just knew I had a cool, fun dad that had a lot of cars and a lot of houses and we would just go a lot of places. I had no idea what he was doing…’. In 2007, his father and uncle were both sentenced to thirty years in federal prison for heading their organization.

Subsequently, the then-seven-year-old was raised by his mother, and had a relatively normal childhood. He attended a private high school, and upon matriculating, he enrolled at the University of Nevada, Las Vegas for business studies.

It was around that time that Demetrius had a phone call from his incarcerated father, informing him of his decision to hand over the rights to the BMF story to rapper Curtis Jackson, alias 50 Cent, which allowed 50 Cent to produce an adaptation of the story in either film or television series form. The rapper decided on the latter, and set out to bring the story of Demetrius ‘Big Meech’ Flenory and his younger brother Terry ‘Southwest T’ Flenory to life. He wanted to portray how the brothers made a name for themselves in the 1980’s, which made them one of the most influential crime organizations in the US at that time.

Hence the rapper hosted the first casting call to find his actors; almost 2000 people later, 50 Cent hadn’t found an actor to portray Demetrius Sr. Coincidentally, Demetrius Jr. —who was there to watch the production— was eventually offered the role of his father, thanks to his stark resemblance of him. He moved to Los Angeles and enrolled in acting classes, before embracing his new career as an actor.

He made his debut in 2021, in the television show “Black Mafia Family”, playing the main role of Demetrius “Big Meech” Flenory, appearing in the first season, and soon to be released second season. The following year, he was awarded the recurring role of Travis in the second season of “Euphoria”, alongside Zendaya and Minka Kelly. His most recent role is in a yet to be released television show “Taurus”.

In 2019, the actor self-released his debut single entitled “Bad Habits” under the name “Lil Meech”—a tribute to Big Meech, his father—. He even included half a minute of his imprisoned father talking in the music video.

Who is Demetrius Flenory Sr.?

Demetrius Edward “Big Meech” Flenory was born on the 21st June 1968, in Detroit, Michigan, USA. Not much is known of his early childhood and family history, except that he has a younger brother, Terry Lee ‘Southwest T’ Flenory, born two years after him. In the late 1980’s, —while the brothers were still in high school — they started selling bags of cocaine around their hometown.

What started as a small side-business led to a large organization by the year 2000; the brothers supervised huge distributions of cocaine across the US in a number of states, including California, Missouri, Georgia, Louisiana and North Carolina. This organization was estimated to have a nationwide membership of more than 500, and a distribution of cocaine worth more than $240 million. Named Black Mafia Family,  the organization had two main headquarters: an Atlanta location primarily for distribution under Demetrius Sr., and a Los Angeles base under Terry, primarily for receiving shipments from Mexico.

The Black Mafia Family also ventured into the entertainment industry, and formed BMF Entertainment, which allowed them to easily launder the millions earned from cocaine sales, and legitimize it. It also became a record label for the organization’s only artist, Bleu DaVinci, as well as promoting numerous high ranking hip-hop stars. Eventually, Demetrius along with the Black Mafia Family gained notoriety in pop culture, due to their excessively flashy lifestyles.

In 2003, a feud between the brothers occurred, which was rumored to be caused by Demetrius’ attracting a lot of attention due to his extravagant lifestyle and partying tendencies. Around the same time, the duo were being investigated by authorities, who over a period of five months obtained a 900-page long transcript of wiretapped calls from the younger brother’s phone. Charges were filed against them and several others within the organization, and in November of 2007, both pleaded guilty to the charges of running a continuing criminal organization. As a result, the duo were given a sentence of 30 years in a federal prison.

Just 13 years into their sentence, Terry was granted a release to house arrest in May of 2020,  a compassionate parole due to his health issues, as well as an effort to reduce the spread of the COVID-19 pandemic in prisons by the Federal Bureau of Prisons.

Demetrius Sr. applied for his release under similar conditions, but his application was rejected, the federal judge citing the unpleasant nature of Demetrius’ prison record; he still promotes himself as a drug lord. He has also committed violations such as possession of weapons, a cellphone, and even abusing drugs. Currently, he’s serving his remaining sentence at the Federal Correctional Institution, Sheridan – his scheduled release date is 5th May 2029, a few weeks shy of his 64th birthday.

TMZ reported that the young Demetrius had been arrested in Miami, on charges of first-degree grand theft and first-degree organized fraud. Police revealed that the actor walked into Haimov Jewelers in February 2022, and allegedly purchased a Richard Millie watch worth $275,000 with a Rolex worth $90,000, and agreeing to pay $100,000 for two months. A few weeks later, he allegedly returned to the store to request repairs to his watch; he was also loaned another Richard Millie watch worth $350,000 for his photoshoot, and was required to return it within three days.

Many weeks later, the jeweler accused Lil Meech of trying to trade the watch to another jeweler, —after seeing a social media post on the other jeweler’s Instagram account— and promptly informed the authorities. Initially, law enforcement called Demetrius to request he turn himself in to police, but he hung up. Miami Police then wrote up a warrant for the actor’s arrest that was issued on the 14th May 2022. He eventually turned himself in, and appeared at the Turner Guilford Knight correctional center. He was bailed out later that day,.,

For his release, his BMF co-star Abraham D. Juste, alias “Da’Vinchi” paid a bond of $1.4 million. Among the reasons stated by Da’Vinchi for bailing his co-star was so that they could film the upcoming second season of the crime series, “Black Mafia Family”. In a video that was posted on his Instagram Story, a seemingly calm Lil Meech is with Da’Vinchi moments after his release on bond., and can be heard saying, ‘My boy got me out though my boy got me out for real’. On the 30th August, 2022, the actor shared on his Instagram account that the charges were dropped, ‘God is Good. Case Dropped’. He celebrated the news with a new watch from Elliot and Pristine.

The actor is a male of African ethnicity and American nationality. He has a height of 5ft 7ins (1.7m) and weighs around 132lbs (60kg). The 22-year-old has various tattoos on his body, including on his neck and forearms; his parents are among them, plus a BMF logo on his neck. Concerning his clothing style, the actor can be seen wearing trendy clothes and various styles while on scene.

The primary source of Demetrius’ net worth and salary are from his job as an actor. Authoritative sources cites his net worth to be at least $3 million, which is likely to increase as he continues accepting roles on the big screen.