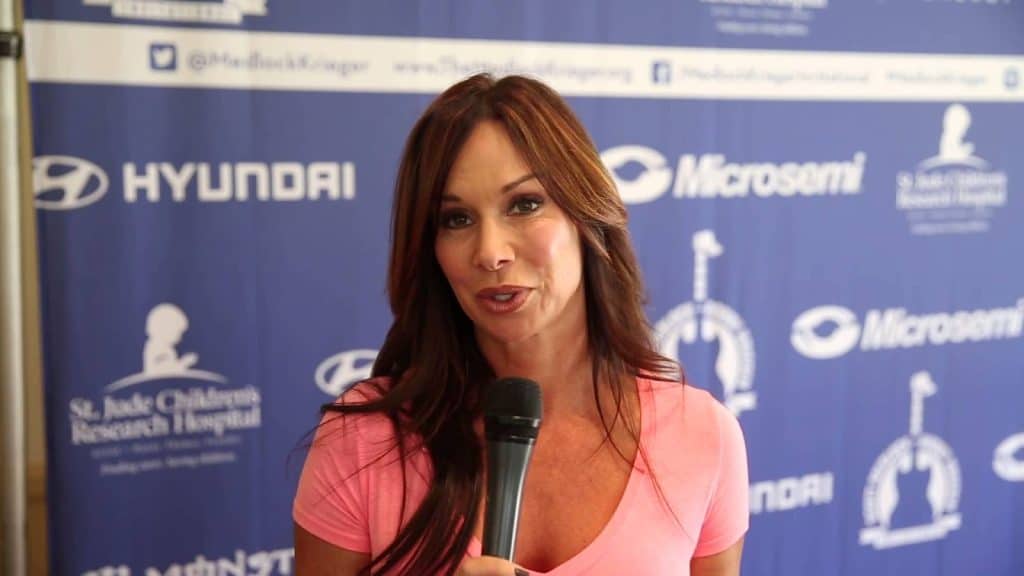 Debbe Dunning is an acclaimed American film actress, comedienne, TV personality and model, who is perhaps most famous for her appearance in the ABC sitcom “Home Improvement”, and the 1996 film “Leprechaun 4: In Space.”

Debbe was born Debra Dunning under the Cancer zodiac sign on 11 July 1966, in Burbank, California, so is 56 years old as of 2022. She was born into a Christian household to Bob and Spencer Dunning; she hasn’t spoken of her siblings, and so it’s widely speculated that she was an only child. She’s revealed that she was very fond of dolls during her childhood, and also that  she began taking an interest in acting and modeling at an early age.

Dunning attended John Burroughs High School, Burbank, –the same school her parents attended two decades before. She was a cheerleader during her time there, and was named the school’s Homecoming Queen, in addition to winning the 1984 Miss Burbank title. She is reported to have attended a prestigious, but unnamed college.

Debbe likes playing golf during her spare time, and is apparently quite good. She’s an outdoorsy person, who likes hanging out with her family and girlfriends.

She loves trying out different cuisines – her favorite is sushi.

Dunning is a dedicated animal lover and animal rights activist, who likes posting her pet cat and dog on her Instagram page. Her favorite animals are horses, and is a big fan of horseback riding.

She also loves skiing, skating together with her children, and kayaking.

In 1984, Debbe won two beauty pageants as a bikini model, which drove her to pursue a modeling career. She later signed with the renowned Los Angeles-based Judith Fontaine Talent & Modeling Agency, and subsequently appeared in a string of commercials for Miller Beer before she made her first TV commercial appearance for Foot Locker. She then posed for Ford Motors, and her sky-rocketing fame saw her selected to play “Run for the Border Girl” in several Taco Bell commercials. Her success as a model saw her featuring in her own calendar in 1996, when she was 30 years old.

Dunnings made her film debut as Pageant Girl in the David Lewis-directed comedy “Dangerous Curves” in 1988. She later guest starred as Heidi in the ABC primetime TV series “TGIF” in the year that followed, appearing together with Danielle Fishel, Mark Linn-Baker, and Ben Savage. Subsequently, she played a guest role in an episode of the ABC series “Who’s The Boss?”, and portrayed Lydia in the HBO comedy-drama series “Dream On”, both in 1990.

She later appeared in two episodes of the Fox situation-comedy “Married…with Children” in 1991, and her next TV roles were in Fox’s “Chalie Hoover” in 1991, and 1992’s “Vinnie & Bobbie. Debbe made her career breakthrough that year, when she was selected to play the guest role of Heidi Keppert AKA the ‘Tool Time girl’ in the second season of the acclaimed ABC comedy “Home Improvement.” After Pamela Anderson departed from “Home Improvement,” she was selected to replace her with a starring role in the show’s third season, eventually until it ended in 1999, which saw her attaining worldwide recognition, and sharing the screen with renowned actors such as Earl Hindman, Johnathan Taylor Thomas, Patricia Richardson and Tim Ellen.

Concurrently, she appeared in a single episode of the TV show “Renegade” as Jolene and was later seen in the HBO horror series “Tales from the Crypt”, both in 1994, and several other roles before the decade ended, including Amanda in the CBS drama series “Silk Stalkings” from 1994 to 1996, later in 1996 in another CBS comedy, “Boy Meets World”, and appeared in the fourth sequel of the film series “Leprechaun” entitled “Leprechaun 4: In Space” in 1997. The Californian actress appeared as herself in The WB sitcom “The Jaime Foxx Show.”

2002 saw Debbe playing Veronique in ABC’s comedy, “Sabrina the Teenage Witch”, and Sun Goddess in the comedy movie “Now You Know” in the same year. She was later seen in MyNetworkTV’s telenovela “Wicked Wicked Games” in 2006, and the film “The Last Guy on Earth” in the same year.

TV Host Carrer and Other Works

Debbe contested in the show “American Gladiator – All-Star Network Challenge,” which aired from 1989 to 1997 and she also worked on the John A. Davis-directed animated TV short special, “Santa VS. The Showman.” In 1998 and 1999, Debbe came in as a panelist in NBC’s “Hollywood Squares”, and she later appeared in the TV special entitled “The 13th Annual Genesis Awards.” Recently, Dunning hosted her show, “Debbe Dunning’s Dude Ranch Round-Up” in 2017 and 2018.

Dunning is now divorced. She was previously married to the former American-born volleyballer, Steve Timmons – the duo walked the aisle on 11 May 1997 but they ended their 21 years of togetherness in 2018. Steve represented the US several times; he played in three consecutive Summer Olympics winning bronze and two gold medals with the team. He is also the former president and co-founder of the Redsand lifestyle and action sports clothing brand.

The former couple had welcomed three children together – their daughter, Spencer Schae Timmons was born in 1996, first son Stony in 2000, and Debbe’s lastborn son is named Sysco, born in 2008.

Debbe was previously dating the former American baseball catcher, Michael Joseph Piazza, who played for MLB in the late ‘90s but their relationship lasted only for a year. Piazza is now married to the American actress and model Alicia Rickter.

Debbe Dunning is a household name in Hollywood, and has earned a decent sum from her modeling and acting endeavors – she is worth approximately $4 million as of 2022. Her luxury home is situated in Del Mar, California, and is a massive horse ranch.