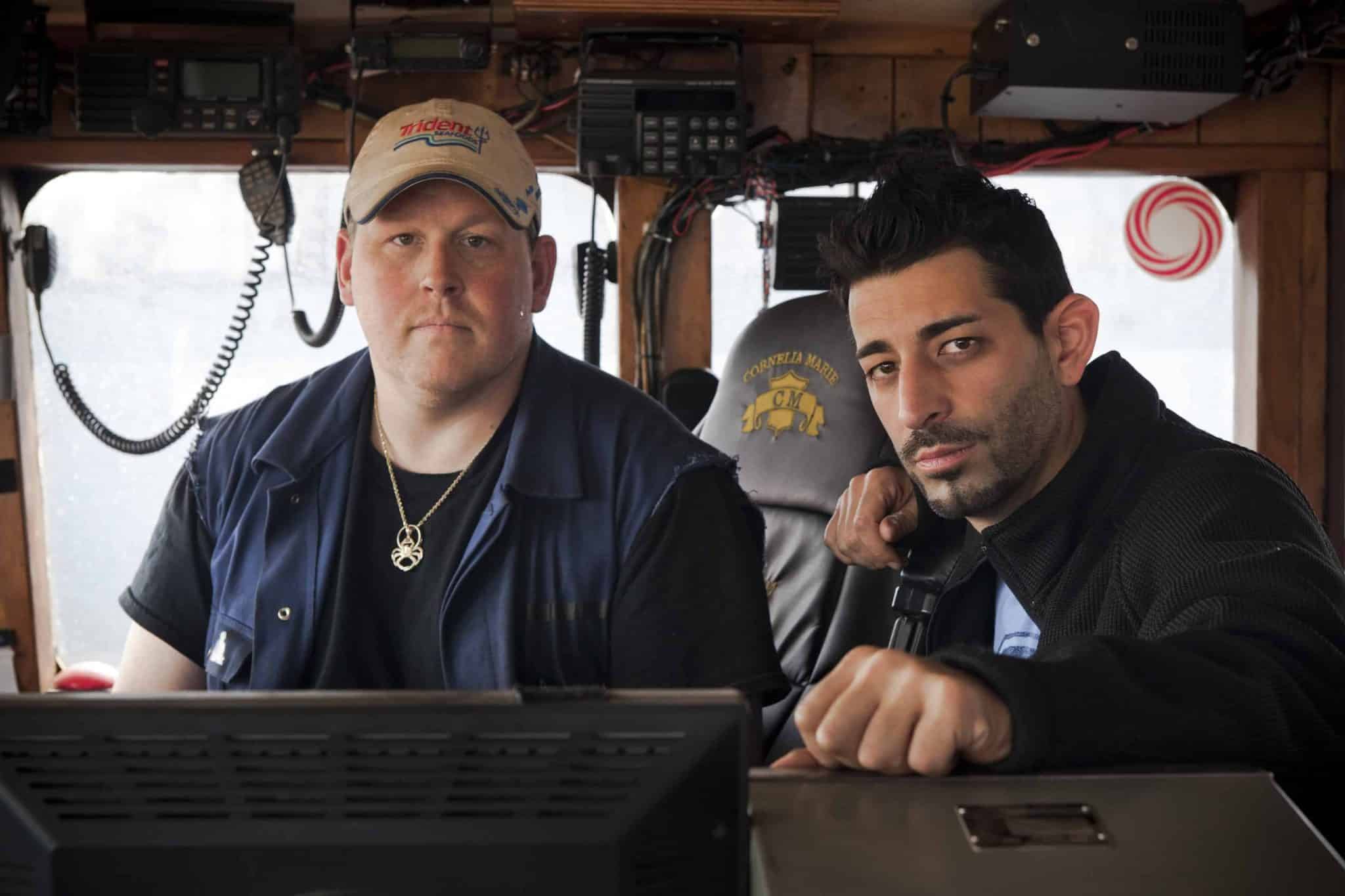 Josh Harris and Casey McManus are only two of the stars from the so-called documentary TV series entitled “Deadliest Catch,” and its spin-off “Deadliest Catch: Bloodline.” They stand out from the rest, however, thanks to being an inseparable duo with their own show – the latter title. That said, it’s not likely Casey would’ve been on the show without sheer luck, as it was meant to start with Josh only.

Like most TV shows about real-life individuals, documentary or reality, “Deadliest Catch” and its spin-off are fraught with controversy, gossip and drama. With a glance at the “Deadliest Catch: Bloodline” duo, one can find exactly that. While there’s no particular drama between Josh and Casey themselves, certain past events trail and disturb their public image to this day.

Their friendship now also comes across as odd to the broader public, not for their lack of affection or tendency to argue, but simply the way they interact, especially in front of the camera. Of course, most of that can be chalked up to spending most days together while working. Certainly, some ambiguities related to the two have left the audience perplexed.

Josh’s rise from the cold seas

The surname Harris has definitely been big in “Deadliest Catch” from the get-go, but not because of Josh. His father, Phil Charles Harris, spent seasons two through six combating the brunt of the Bering Sea in his quest for Alaskan king crab. To this day, he remains one of the most iconic cast members in the show’s history.

A fisherman from the tender age of eight, under the guidance of his father, Phil arrived onto the screen more than prepared. His first work, aside from helping his father, was as a deckhand on a crab boat, although without a salary. Throughout his teenage years, Phil made just enough to buy his own fishing boat, becoming a captain by the age of 21, of his F/V Golden Viking in Seattle.

His most famous vessel, further glorified in the show, is the F/V Cornelia Marie, named after his wife. He sold the F/V Golden Viking and added some extra dollars to get a hold of his lifelong partner, after which he made numerous upgrades to it, and kept it in top shape throughout his career. This very same vessel is now used by his son Josh as he sails around the coasts of Hawaii, alongside Casey.

Phil lived on the edge most of his life, caring only for the most bountiful catch and not much else. This mindset brought him fame and fortune, especially in the show, as fans and producers alike have great appreciation for those willing to go the extra mile. Unfortunately, this lifestyle ultimately caught up with him, and his unhealthy habits manifested in a lethal manner.

He suffered a stroke while filming the sixth opilio crab season of “Deadliest Catch” after going to his stateroom to take pain medication, where he was found incapacitated by engineer Steve Ward. Although mentally present, he wasn’t able to move his left hand or left leg. The paramedics were immediately called, as well as his sons – in spite of what most would do in a situation like that, Phil asked the crew to keep filming regardless, as this was part of the action, staying in his goal-oriented mindset even until the very end.

As a result, he was filmed being airlifted from the area into Anchorage in Alaska, where he was rushed to the emergency room. The doctors immediately performed brain surgery so as to ease the pressure growing in his cranial vault and damaging his brain. Although the medical procedure initially seemed successful, Phil’s condition began to deteriorate a few days later. He was pronounced deceased after 11 days in the intensive care unit, on 9 February 2010.

His son Josh took over the family business and inherited the F/V Cornelia Marie, joining the show in its 10th season to continue his father’s legacy. Thanks to the great name Phil left behind, the crowd didn’t take long to warm to Josh, which quickly turned him into a fan favorite. This boost in popularity eventually landed him a separate contract with Discovery Channel, resulting in the birth of his own spin-off series.

As the name states, the series often referred to as simply “Bloodline” is about the continuation of a family business, and its dream. The idea for the show actually popped up as a humorous assumption, according to Josh Harris’ interview with Sig Hansen from April 2020. He said ‘Well, you know, we were remodeling our boat. I found some charts underneath my dad’s bed, that we hadn’t seen in a long time, along with many other random things that were stashed underneath there, and, yeah.’

He continued the story, saying ‘I was joking around one day during lunch after we found them, I was kind of going through 50 charts there. There was a couple of them really marked up, and they were charts for Hawaii, and I was like ‘Yeah, let’s go find these spots out here and check ‘em out, you know, and it’s warm too.’’ The charts in question had remained hidden on the vessel for over 35 years, staying there since the 1980’s – his father had created them throughout his long journeys around the Hawaiian Islands.

Eventually Josh and Casey did go and visit some of the marked areas on the charts, finding really interesting spots, and discovering a brand new way of catching marine creatures. There was also the fact that Josh had only hunted crab before, so he was about to start an Hawaiian adventure without any prior knowledge. In his own words from the interview, ‘I suck at fishing, for fish, that is.’

The working of the most popular “Deadliest Catch” spin-off

Upon reaching the islands, Josh and Casey realized they couldn’t read most of Phil’s maps because they don’t actually know the area. To solve that problem, they invited a local commercial fisherman who knows the seas and oceans like they’re in his back pocket.

Profits started going up when the team realized that a lot of these marked spots contained yellowfin tuna – an exotic delicacy anywhere in the world due to how elusive these fish are. It is said that each of those sells for approximately $2,000 minimum, but Josh and Casey hunt other fish too, such as barracuda, swordfish, and whatever else they happen to get their hands on by the time the cameras go blind.

The show was commercialized as a documentary and reality TV series, airing for the first time in June 2022, along with the first episode of the “Deadliest Catch” season two premiere. They eventually narrowed their search, and ended up settling near the Kona Coast – a great place for catching lucrative tuna.

While it’s mostly just about fishing, the show can also become really dangerous, such as this video, showcasing how veteran fisherman and show guest Johnathan Hillstrand got into a bit of trouble trying to cross the US border during COVID travel restrictions, in the middle of 2021.

The duo traversed the jungle in search of someone who could get them to the US unofficially. This is when they ran into a mysterious man holding a shotgun in the middle of an empty field, standing right next to his dog and looking around sharply. After some conversation, he promises to help the fisherman, but needs a favor first: killing wild pigs and deer.

The immediate ruination of Josh’s career

As recently discovered by radaronline.com, as of September 2022, Josh Harris will no longer be a part of the main “Deadliest Catch” show, after appearing in seasons 10 through 18. This, of course, means that Casey McManus will not be showing up either, as they co-captain F/V Cornelia Marie. Luckily for him, there’s still been no confirmation of his suspension from “Deadliest Catch: Bloodline,” which is due for a fourth season.

Through the Public Information Act, certain journalists were able to petition documents from Washington State court, which showed the trial and sentencing of Josh Harris over 20 years ago. He was apparently 15 years old when he engaged in sexual acts with a minor – a four-year old girl from his neighborhood. This violation was listed as ‘digital, vaginal and oral rape.’

According to more information, teenage Josh Harris persuaded the young girl to take her clothes off and then perform unspeakable acts with him. The girl was so young that she didn’t even understand what was going on, using childish terms to refer to both of their genitals during her testimony.

The police were called soon after the incident, and upon showing up at the residence, they found Josh’s semen at the scene. Stains with the little girl’s blood were found in the fabric of her pillow and bedsheets, as well as on the floor. This event took place on 14 July 1998, but due to lax technology at the time, DNA testing required longer procedures, causing Josh to remain free for approximately another year. He was ultimately arrested and charged with rape and other crimes in 1999.

Harris was shown lenience in court due to his age, allowing him to eventually make a plea deal. He pleaded guilty in exchange for a much lighter sentence, serving a mere nine months behind bars, and having to undergo a psychosexual exam. There have been no similar events in the known history of the fisherman, but just this fact on its own is enough to probably take him off the screen forever, meaning that now even his friendship with Casey is uncertain. As the information is still quite fresh, the true extent of the consequences remains to be seen.

Lastly, it now seems as though both of the Harris brothers have had significant trouble with the law. Jake Harris, Phil’s second son, was initially arrested for driving under the influence at 86mph (138kmh) in a 70mph (112kmh) zone. He has since then lost his license, and even upon re-obtaining it, he would need to drive a car with an ignition interlocking device on board.

He was arrested again in May 2021 for driving under the influence, with a revoked license, and without the necessary ignition installment. He said that the car belonged to a friend, and that it was lent to him for just one ride. He was found in a strange state, with pale skin, bloodshot eyes, constricted pupils and repetitive speech.

The officers requested him to undergo a sobriety test, as per protocol, which he refused. Jake was then arrested and booked into county jail. He paid a $50,000 bond for immediate release, but was later tried on the charges of driving on a revoked license, failure to have an installed ignition lock as legally required, and driving under the influence. The former “Deadliest Catch” star served 18 months after sentencing.

Although now severely strained by the horrific revelations about Josh’s past, the relationship between the two captains of F/V Cornelia Marie is nonetheless peculiar. They’ve known each other since they were children, thanks to their parents captaining fishing vessels and co-operating far out at sea. Still, they didn’t interact that much at an early age.

Who is most likely not to change his underwear for two weeks? @northwesternsig and @JakeVAnderson are NOT holding back. #DeadliestCatch pic.twitter.com/UAA1Jf2f34

Casey and Josh became best friends in 2010, but still had different careers and worked separately. While attending fellow “Deadliest Catch” star Jake Anderson’s wedding, they were sitting at the bar and drinking, and Josh said his boat required a co-captain to be able to fully take on the waves.

McManus offered himself up, and has been captaining F/V Cornelia Marie ever since. The two now have inextricable careers, which does complicate things, considering recent developments. Whether they will still remain friends, or maybe even close colleagues is anyone’s guess, as the public outcry reaches unprecedented levels.