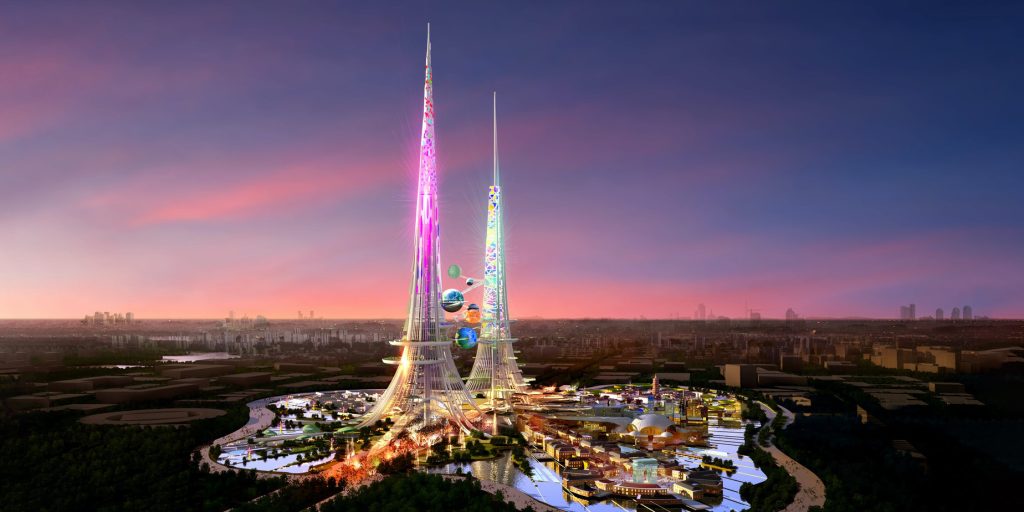 China is the leading country in the world when it comes to building megaprojects – projects of unmatchable importance for communities and/or nature, which cost more than $1 billion. These can be highways, tunnels, bridges, power plants, public buildings, dams, and even weapons systems, but there are many of these projects which have remained unfinished, and have cost their countries a lot of money. Being the most populated country in the world with its more than 1.4 billion people, China has started numerous housing projects, which include building entire cities over several years, but many of these have either been abandoned or postponed indefinitely, and have cost property buyers and the constructiong companies a significant amount of money.

China began building the Goldin Finance 117, or China 117 Tower, on 16 August 2008 in the Xiqing District, Tianjin, wanting to break the world record for the tallest building with a flat roof in the world.

The building was supposed to be finished back in 2014, but the ‘great recession’ in 2010 ruined China’s plans, and they thus put the project on hold in January 2010. The economic decline hit many countries in the world, and caused numerous projects to be given up on or postponed; it caused the fall of housing prices, however, unlike some developed European countries, China still managed to improve its economy in only a couple of years.

Close to $500 million had already been spent on building Goldin Finance 117 by 2010, and unwilling to give up on the project, its construction continued in 2011. The estimated completion date was moved to 2018 or 2019, however, all work on the building was ceased on 8 September 2015, and the project contractor – China State Construction Engineering Corporation – removed all workers from the site.

Goldin Finance 117 remains unfinished and so unoccupied as of January 2022, but it’s still widely believed that the megaproject might continue in 2023, as there is reportedly less than a year of work left to complete it.

The amazing megaproject stands at the height of 1,957ft (596.5m), and numbers 128 floors, with its observatory at 1,990ft (580m). The building has 89 elevators, and its floor area is 370,000m2. Before it was decided that it should have a walking stick shape, it was discussed that it could also be diamond-shaped or fin-shaped.

Russian and Chinese urban explorers climbed both the construction crane and the tower in 2015, and the following year saw Russian YouTubers and social media stars Angela Nikolau and Ivan Beerkus climb the tower by taking the stairs. The video of their venture was uploaded onto YouTube by Travel Ticker, and has been watched close to a million times.

While it’s still at least temporarily a megaproject failure, many travelers find the story of Goldin Finance 117 intriguing, and some travel to Xiqing District just to take a picture while standing close to the building.

Xiangyun International Project in Shijiazhuang, Hebei Province is also known as Xiangyun Ghost Town, because it covers more than 1,800 acres or over seven million square meters, cost $3 billion, and is apparently completely abandoned.

It began as a government strategic investment to benefit the tourism and real estate sectors. The original plan for this city project consisted of two parts – the south covering 1,300 acres of residential communities, over 5 million square meters, and the north which was supposed to be trees and nature in general.

The private company working on the project, Hebei Real Estate Development Group, was put under investigation in 2014, because of alleged corruption and illegal activities, and since then, the company has only accumulated debt, today amounting to several billion dollars. It has been reported that it was because of the company’s legal representative Mr. Li Sheng’s activities that Hebei Real Estate Development has been put under investigation.

More than 10,000 people had already purchased homes in Xiangyun International Project, but they can’t move in because their apartments haven’t been finished, nor have they received their money back or any compensation.

The project was ended for good in 2017, and the property owners have filed a lawsuit together, asking for their country’s government to help reimburse them.

The construction of Yujiapu Financial District started in 2009 on the Hai River North Shore, and was planned to look similar to New York City’s Manhattan. The megaproject’s cost was estimated at around $30 billion, and was to serve as a central business district.

The building was projected to be finished by June 2014, however, similar to Goldin Finance 117, the ‘great recession’ slowed down the initial plans. The project was still continued, but at a very slow pace, so the first property owners didn’t move into the district until 2016.

Yujiapu was planned as a megaproject comprising 41 smaller projects, more than 20 of which haven’t been completed to this day. Back in 2017, the magazine “Morning Post” reported that the district looked rather abandoned, even though a lot of people had already moved in. It was also reported that half of the project wasn’t finished, but that workers were spotted on multiple construction sites.

Amongst the amazing buildings which haven’t been completed in Yujiapu are Liqin Hotel, Shenglong International Finance Center, China Shipbuilding Heavy Industry Building, Wenhou Building and Shangbang Leasing Tower. Many Chinese people are still sceptical about the Yujijapu Financial District, claiming that it might become yet another of many ghost towns found around China, in other words a white elephant.

The complex is just one of close to 100 projects which have either been abandoned or halted, and is costing Chinese people and their country a lot of money. The Evergrande Oasis developer is Evergrande, the country’s second largest property developer, but which today has more than $300 billion in liabilities, and is struggling to pay its investors, suppliers and lenders.

After property owners had walked by the project and saw that it was stopped, various media outlets were contacted, both domestic and foreign, and they reported that 16 blocks of the complex weren’t finished, while no workers had been seen around the construction sites.

The people have expressed their fear of Evergrande Oasis becoming yet another Chinese ghost town, claiming that they might not be able to move in nor receive their money back, while having paid over $1,500 per square meter.

Forest City Johor is a megaproject funded by China, being realized in Malaysia, over The Causeway from Singapore.

The purpose of this integrated residential complex was initially meant to attract Chinese people to Malaysia, to both vacation and live there.

The building of the 1,370 acres city, over five million square meters, started in 2006, and was estimated to take up to 20 years to complete. Forest City was to be an ‘energy-efficient, ecologically sensitive, land-conserving offshore city’, but its development has had various negative impacts on the environment, and irreversible damage has been done to coastal wetlands.

Because the country failed to share the details of these negative effects with Singapore, as it also impacted them, and because of various other problems that the building of the project had caused, it was announced by the Malaysian authorities in January 2015 that 81 changes had been made to their initial plan. The city was no longer to have over 1,000 acres, but was reduced down to 405, about two million square meters, and was split into four man-made islands; there was also controversy surrounding corruption on various levels and stages of the project, and it was claimed that Chinese white-collar workers were hired to work.

By 2018, only 15,000 apartments were sold, and only 500 people moved in instead of the expected 700,000. There were many changes in the Malaysian government in 2018, and the same year saw the worsening of the relations between Malaysia and China, mostly because the country suspended their visa program Malaysia My Second Home; numerous Chinese people stopped working on the project and returned home, while those who had bought houses there sold them at a big loss.

In 2020, the development of the project was ceased because of the outbreak of the coronavirus, and the sales of properties have dropped by more than 90 percent since March 2020.

The Chinese project Transit Elevated Bus was introduced in 2010, and its designer had told the newspaper “People’s Daily” that five cities had already signed contracts to start testing the bus, while the magazine “Time” ranked it amongst the best 50 inventions of that year.

Things quickly changed after experts started asking questions about the large bus, claiming that it would have problems with handling curved streets, turning corners and avoiding tall trucks as well as pedestrians. It was added that the cars passing underneath the bus would have no visual of traffic signs, and that the drivers would have a hard time seeing which lane is for which turn. Professor Shen Gang from Tongji University called the project absurd and childish.

The work on Transit Elevated Bus was still continued, and attracted a lot of attention when it was shown at a high technology expo in Beijing in 2016. Wealthy businessmen invested more than $500 million into the project, and were promised a shared return of 12 percent.

Progress on the project was constantly held secret, and the official rollout kept being delayed, which was why the municipal government of Quinhuangdao refused to endorse it, dismantled the test site, and started investigating the people in charge of Transit Elevated Bus for corruption.

The company’s CEO Bai Zhiming, and 31 of his employees, were arrested by the authorities, accused of stealing investors’ money; China then focused on returning funds to the people who had invested.

Some of China’s completed megaprojects

Beijing Daxing International Airport is one of China’s most expensive megaprojects, having cost a total of $63 billion, $17 billion for the airport itself, and $46 billion for peripheral developments. Its construction began on 26 September 2019, and was completed on 30 June 2019. The airport has the largest terminal in the world – 700,000 square meters – and sits on 47km2 of land.

The Hong Kong-Zhuhai-Macau Bridge is actually a bridge-tunnel system which cost close to $19 billion; its construction began on 15 December 2009, and although it was expected to be completed in the second half of 2016, the bridge wasn’t opened to the public until 24 October 2018. The idea for the bridge was proposed by the Hong Kong businessman Gordon Wu back in the ‘80s, as a way to connect (then) China, Macau and Hong Kong; it was only agreed in August 2008 that the bridge would be built, after Hong Kong, Macau and China’s Central Government agreed to cover 22 percent of the megaproject’s cost.

During the nine-year construction of the Hong Kong-Zhuhai-Macau Bridge, 19 workers died at the job.

The Shanghai World Financial Center is a skyscraper in Pudong, Shanghai which was opened to the public on 28 August 2008; it was the second-tallest building in the world at that point, with its height of 492m, over 1600ft. The construction had begun 11 years earlier, on 27 August 1997, and its total cost was $1.2 billion. The building has hotels, offices, a parking garage, museum, retail stores, and observation decks.

Shanghai Yangtze River Tunnel and Bridge was a megaproject which cost China close to $2 billion, and it was built between 2005 and 2009. The complex connects Pudong District, Shanghai with Changxing Island and Chongming Island, and is 25.5km long, about 15 miles. The tunnel itself is 8.9km long, and has two stacked levels: the upper serves as a motorway, while the lower is for the metro line which is yet to be realized. The bridge’s length is 16.6km, over 10 miles, and comprises two viaducts with a cable-stayed section so that large ships could pass.