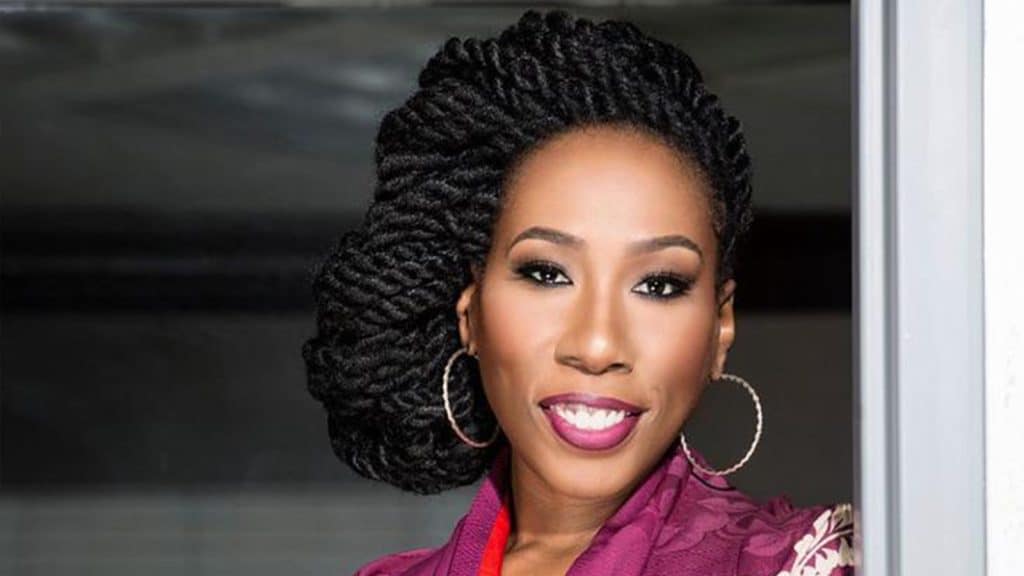 Who is Brandi Harvey?

Brandi is an author and fitness and wellness coach, but is probably best known to the world as the daughter of comedian and TV personality Steve Harvey.

Brandi was born on 20 August 1982, in the USA, together with twin sister Karli, to Steve Harvey and his first wife,Marcia. The girls have a younger brother, Broderick Harvey Jr., who was born in 1991. Brandi’s parents divorced in 1994 when the two girls were 12 years old.

Following her parents’ split, in 1996 her father married Mary Shackelford, with whom he has a son Wynton, Brandi’s younger half-brother; they divorced in 2005, after which Steve been married for the third time since 2007, to Marjorie Bridges and has adopted her three children, Morgan, Jason and Lori, making them Brandi’s siblings.

After she finished high school, Brandi enrolled at Ohio State University, from which she obtained a Bachelor of Arts degree in African American and American Studies.

In 2010, Brandi became a member of the Atlanta-based fitness organization Young, Fit, and Fly, which concentrates on young women of color who wish to bring their physical and mental health to the top level.

Moreover, in 2012, she became the executive director of her father’s charity organization, the Steve and Marjorie Harvey Foundation, and she also runs The Steve Harvey Mentoring Program for Young Men and Girls.

Through the Young, Fit, and Fly, Brandi met other like-minded women, and herself trained enough to become an amateur bodybuilder, entering the national amateur bodybuilding contest National Physique Committee (NPC) and was second. She wasn’t disappointed with the outcome, and loved the entire preparation process.

In 2018, Brandi started her own organization and website, Beyond Her, with her mission, as she puts it, to bring active wellness to women of color in collaborative and transformative ways to elevate the mind, body, and spirit. Brandi creates her recipes for healthy food, lifestyle and exercises routines that she shares with her clients.

She is also a public speaker, offering her guidance to crowds at a variety of events for women, such as the Well Leadership Intensive event at Princeton University. Moreover, she has given speeches at Harvard Business School, Disney Dreamers Academy, The White House, and others.

Brandi is also an author and published the book “Breakthrough Sold Separately” in 2019.

As of mid- 2022, Brandi Harvey’s net worth has been estimated at $5 million, acquired through her multi-faceted career.

Brandi is mainly focused on her professional achievements rather than personal aspects. According to sources, she is single and working hard on improving herself and thousands of other women; she’s currently single, but she hasn’t talked about her past relationships.

Brandi Harvey has long black hair and brown eyes. She stands at 5ft 8ins (1.73m), weighs about 130lbs (58kgs), and takes good care of her hourglass figure, however, her exact vital statistics are unknown, though she is rather close to perfection.

Broderick Stephen Harvey Sr. was born on 17 January 1957, in Welch, West Virginia, USA. He’s the son of a coal miner, Jesse, and Eloise Vera Harvey. During his childhood, Steve experienced huge problems with stuttering, but overcame the issue through the years.

Although born in West Virginia, the family moved to Cleveland, Ohio, where he attended Glenville High School, from which he matriculated in 1974. He then enrolled at Kent State University but soon transferred to West Virginia University, however, he didn’t finish his studies, and now regrets that he didn’t get his degree.

Before becoming a famous comedian and a television host, Steve had several jobs, including insurance salesman and mail carrier, and he was also a boxer.

Life was hard for young Harvey for a while, living in his car and showering at gas stations or swimming pools.

He entered the stand-up comedy world in the mid- ’80s, when he performed for the first time at the Hilarities Comedy Club in Cleveland, Ohio.

He participated in the Second Annual Johnnie Walker National Comedy Search, and was one of the finalists, eventually earning himself a spot as a host of the “It’s Showtime at the Apollo”.

He was praised for his work, and got his own “The Steve Harvey Show” in 1996. The show ran for six years, but it was only popular within the African-American community.

In 1997 Steve toured the US with Cedric the Entertainer, Bernie Mac and D.L. Hughley – the four comedians grossed over $18 million. This was the highest-grossing comedy tour, and their act was later turned into a film, “The Original Kings of Comedy,” directed by Spike Lee.

In 2010 Steve was named the host of the show “Family Feud”, which features two families competing to win cash and prizes by guessing top answers to various questions. Since Steve took over the hosting duties, the show has seen increased ratings, the highest popularity in its history.

Since 2015, Brandi’s father has also been the host of “Celebrity Family Feud”, in which celebrity families compete for a prize of $25,000, which they donate to charity organizations of their choice.

To speak further of his achievements, Steve is the host of the “The Steve Harvey Morning Show” on radio, a weekday morning program that has been on the schedule since 2000.

Moreover, he’s the host of the arbitration-based court comedy show “Judge Steve Harvey,” which airs on ABC. The show premiered in January 2022.

His Steve & Marjorie Harvey Foundation hosts a yearly camp for children growing up without a father. Moreover, it provides a scholarship for Kent State University.

Steve is a devout Christian, who connected his success with his faith in God. He follows a vegan diet mainly because of health reasons, as he struggled with being overweight in the past.