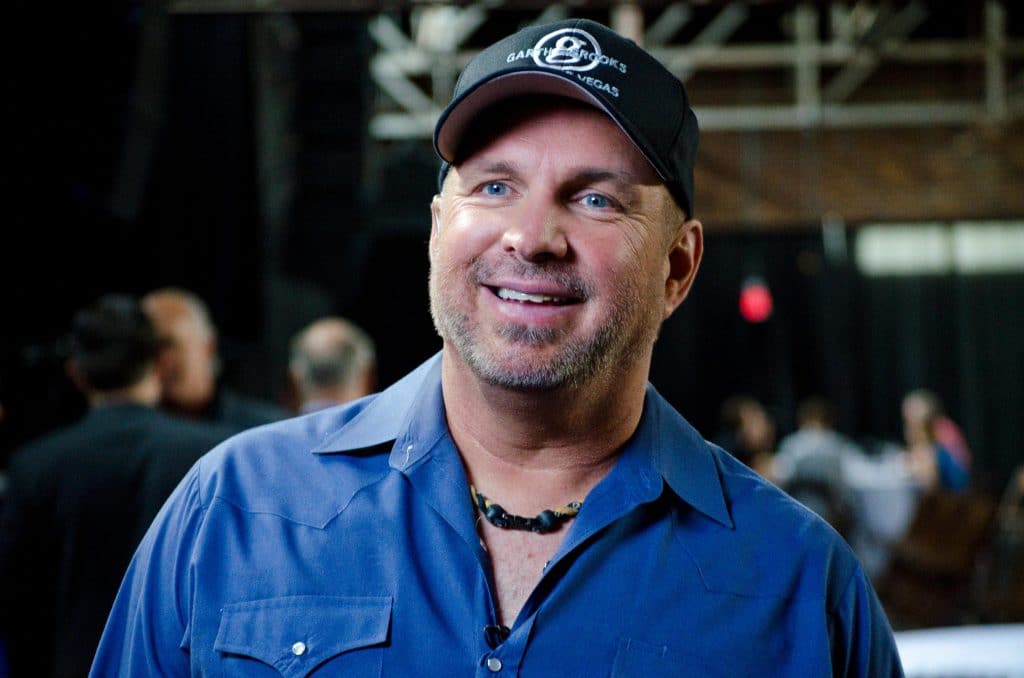 “Being a dad” – Garth Brooks Quit Music 15 Years Ago

Modern country music wouldn’t be what it is today without Garth Brooks. He earned his popularity through a clever mix of country and rock music. In 2007, he became the first musical artist in history to have nine albums achieve diamond status in the US, an unbelievable record yet to be broken.

However, none of this would have happened had Garth kept to his decision to quit the music industry for good. In 2001, tired of the constant conflict between his family life and career, he announced his retirement.

Born on 7 February 1962 in Tulsa, Oklahoma, Garth Brooks was the youngest child of Raymond Brooks and Colleen McElroy Caroll. He inherited his musical abilities from his mother, who was a famous country singer in the 1950s. Growing up, Garth had lots of chances to perform, as his family would host weekly talent nights. To prepare for these mini-competitions with his siblings, he learned how to sing, and play the banjo.

Despite his obvious musical talent, young Gareth was mainly focused on sports. During his high school year, he played baseball, football, and ran field and track, and his success as a high school athlete landed him a scholarship at Oklahoma State University. While at college, Gareth started working as a bar bouncer, which led him to form his own band.

Brooks’ professional music career began in 1985, by playing music in bars and clubs in Oklahoma, notably Wild Willie’s Saloon in Stillwater. Around that time, he was noticed by the entertainment attorney Rod Phelps, who offered to produce his first demo, and gave him a list of his music industry contacts.

Garth released his debut self-titled album in 1989, which immediately became a huge success, reaching the #2 spot on “Billboard’s” Country Album Chart, and the release of Brooks’ second album “No Fences” in the following year, marked the beginning of his mainstream fame – the album spent 23 weeks at the top of the Billboard Country Music chart, and sold 17 million copies in the US alone.

Although his music is decisively within the boundaries of country, Garth was also heavily influenced by rock and pop musicians and bands, with some of his biggest inspirations including Billy Joel, Freddie Mercury and Bruce Springsteen.

Family and marriage with Trisha Yearwood

Garth Brooks has married twice – his first marriage was to his college sweetheart, Sindy Mahl. The two married in 1986, and had three daughters together – Taylor, August and Allie. After more than 13 years of married life, Sindy and Garth separated in 1999 – the exact reason for their divorce remains unknown, but it’s speculated that the high-profile nature of Garth’s career played a role in their break-up.

In December 2005, Garth remarried to his fellow country singer, Trisha Yearwood. Before tying the knot, the two had quite a history together; more than a decade earlier, Garth co-wrote one of Trisha’s songs, and later did a duet with her – “In Another’s Eyes”. Their friendly and professional relationship turned into something more after their respective marriages fell apart, and the two made their relationship official in 2002, with their first public appearance as a couple.

Brooks has spoken about how important his family is to him, and how they have helped him through some tough times. In particular, he has spoken about how his wife has been a rock for him, and how his daughters have brought so much joy into his life. Brooks is very close to his family, and they are often seen spending time together. He has said that his family is his everything, and that he’s grateful to them every day.

Why did he announce retirement?

After releasing nine more bestselling albums, Brooks’ was seemingly on top of the world. However, his personal life suffered from the pressure of fame and constant touring. He wasn’t able to spend as much time with his daughters as he wanted, which caused him lots of frustration.

He first started talking about retiring in 1992, and then again three years later, but nothing came of it. In the year 2000, he finally pulled the plug on his career, stating that he would not make a comeback to music at least until his youngest child has graduated high school. This announcement came on the same day that his record label threw him a huge party in celebration of 100 million albums sold in the US.

It’s not a coincidence that he retired from music less than a year after his divorce from his first wife, Sandy. In a recent interview, he confessed that he felt estranged from his daughters whom he was responsible for raising. ‘I was living with three strange women that I did not know. They were eight, six, and four.’, Garth said. This feeling was likely one of the main factors which caused him to slow down with his career, and focus more of his energy on his family.

In the following years, Garth mostly stayed true to his word and kept a low profile. He had occasional gigs, and even did a Las Vegas residency from 2009 through 2012, but didn’t do any major releases or tours. He spent most of his time with his wife and daughters on the Oklahoma ranch, where he took on all the duties of a ‘regular’ dad.

Looking back at all the time he spent away from the music industry, the country legend has no regrets, saying that those were some of the best years of his life. ‘I’ve got to tell you, that first soccer game that you go to as a dad is the greatest moment of my life – and to think of a chance of missing that would just break my heart.’, he said in his comeback interview for “The Boot” magazine.

After contemplating his return for two years, Brooks finally announced his comeback in February 2014. To the surprise of many of his fans, he also announced that he would be embarking on a world tour, starting with two concerts at Croke Park in Dublin, Ireland. Unfortunately, the tour didn’t start on the right footing – due to a licensing conflict with the local authorities, Garth was forced to cancel his planned concerts in Dublin. Nonetheless, the world tour was a huge success, and cemented Brooks’ place as one of the most popular country artists in the world.

In January 2021, Brooks had the honor of performing a rendition of “Amazing Grace” at President Joe Biden’s inauguration ceremony.

In late 2017, Garth had found himself the subject of controversy regarding his performance at the Country Music Association Awards. Only three years into his comeback, the country legend was accused of lip-syncing instead of doing a live performance.

He later admitted that he felt unable to sing live that evening, stating that lip-syncing ‘was necessary’. At that time, he was in the middle of a nationwide tour, and was supposed to be doing 12 shows in 10 days. This put a huge strain on his vocal cords, so the singer didn’t want to risk it at the awards. ‘The voice just isn’t there anymore’, he told reporters.

After his 2017 tour with Trisha wrapped up, Garth took some time to recover his voice, and has since been trying very hard not to overextend himself vocally.

Garth Brooks has been a supporter of gay rights for many years; in fact, he was one of the first country music artists to come out in support of same-sex marriage. In his 1999 “George” magazine interview, he famously said: “If you’re in love you’ve got to follow your heart and trust that God will explain to us why we sometimes fall in love with people of the same sex”.

Garth had a very close relationship with his late half-sister Betsy, who was also a famous country musician and had played in Garth’s band for years. She was lesbian, and Garth often credits her for his understanding of same-sex relationships. One of his most popular songs, “We Shall Be Free” is often considered to be an LGBT anthem, with Garth singing about “being free to love anyone we choose”.

Garth has also been part of many charitable ventures throughout his career. In 1999, he established the Teammates for Kids Foundation to help children in need. The foundation provides support for children in a variety of ways, including financial assistance, educational opportunities, and access to extracurricular activities.

In addition, Brooks has also established the Garth Brooks Scholarship Foundation which provides financial assistance to students who are pursuing a degree in music education.

Further, he has performed at a number of benefit concerts, including one for the victims of the September 11th attacks. He has donated money to a number of causes, including the Red Cross and the Salvation Army.

Garth Brooks is one of the most decorated artists in the history of country music. His first award came in 1989, when he earned the title of the Top New Male Vocalist from the Academy of Country Music. Garth has now received 49 Academy of County Music Award nominations, 23 of which he ended up winning. He won the title of Entertainer of the Year nine years in a row, from 1990 to 1998, and then again in 2001 and 2016.

In the 1990s and early 2000s, Garth dominated the Billboard Country charts, which was reflected in him winning 19 Billboard Music Awards, including for Top Billboard 200 Album in 1995, for “The Hits”.

Further, Brooks is the holder of two Grammy Awards – one for Best Male Country Vocal Performance (1991, for his single “Ropin’ the Wind”) and Best Country Collaboration with Vocals (1998) for his duet with Trisha, “In Another’s Eyes”.

He was also nominated for a Golden Globe in 2001, along with receiving two Primetime Emmy nominations in 1998.

At the height of his popularity, before announcing his retirement, Garth had made a number of guest appearances on TV. In 1990, he guest starred in four episodes of the CBS variety show “Hee Haw”; five years later, we saw him in an episode of “Sesame Street”, and in 1996, “Muppets Tonight” even dedicated an entire episode to Brooks.

Most notably, he hosted “Saturday Night Live” two times, in 1998 and 1999. Garth also had a brief stint in the movie industry, making his debut appearance in the 1989 crime drama “Nashville Beat”.

More recently, in 2016, Garth was a Key Adviser in the 11th season of the widely popular singing contest, “The Voice”. In 2022, he became the narrator for the new National Geographic documentary series “America’s National Parks”. ‘What you’re going to learn is the national parks were kind of preserved at a time when they were really good money-makers for some industries,’ Garth said. ‘So the courage that this country showed to actually preserve them as parks, and the vision this country showed for the future is pretty cool. So it’s a huge learning experience for me but at the same time so entertaining.’

In 2021, Garth returned to Dublin, to make up to his fans who didn’t have a chance to see him in concert during his comeback tour. He performed five nights in Croke Park which has increased his already astounding net worth.

According to online sources, the country musician is worth more than $400 million, with his last stadium tour reportedly earning him over $90 million. He’s the owner of luxury properties in Tulsa, Oklahoma; Malibu, California; and Nashville, Tennessee. In 2019, he and his wife Trisha reportedly purchased a hotel on Anna Maria Island, Florida for close to $9 million.