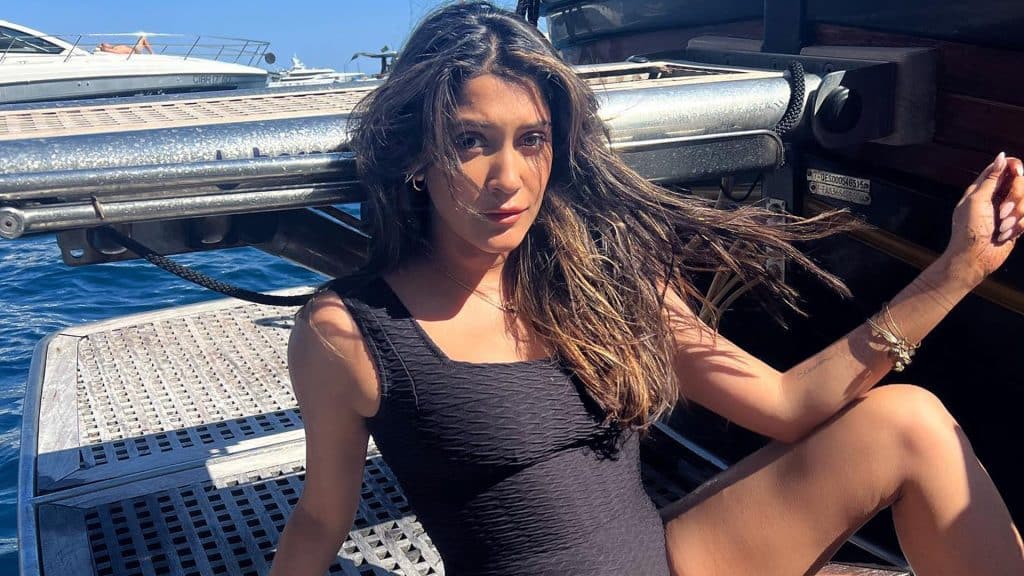 Anuja Joshi is a talented Indian Bollywood actress and model, who is perhaps best known for her performance in the romantic thriller “Hello Mini.”

Anuja Boma Joshi was born under the Leo zodiac sign on 19 August 1993, in Potomac, Maryland USA, so is 29 years old as of 2022. She was born to the business tycoon and former Indian child artist, Alankar Joshi – famously known as Master Alankar – and his wife Namita Joshi, and was raised in Virginia alongside her twin sister, actress Aneesha Joshi, and her younger brother, Aashay Joshi; she follows the Hindu religion. The “Hello Mini” starlet grew up interested in acting, singing and dancing. Her parents were keen on teaching her Hindustani classical music when she was a child. In 2011, she finished her full-length solo dance play, Rangapravesam – a Sanskrit word meaning ‘ascending the stage,’ – in the state of Andhra Pradesh, India.

Anuja went to high school in Virginia, USA, and matriculated to the New York University Tisch School of the Arts. After her graduation, she continued in the University’s Kanbar Institute of Film and Television to study movie directing and trained under actress Grace Kiley, and the veteran dialogue coach and acting teacher, Alice Spivak.

Anuja is a big fan of Bollywood films and TV series, and her best-loved entertainers are Tiger Shroff, Alia Bhatt, and Taapsee Pannu.

She loves traveling, and she has toured various destinations around the world; her favorites are Maldives, Goa, and Dubai.

Her favorite cuisines are Sashimi, Noodles, and Burgers, and revealed on Twitter that she loves ice cream.

Joshi is physically active, and enjoys playing cricket and working out.

Shortly after she completed her film directing course, Anuja landed an internship at the acclaimed media and entertainment firm NBC Universal Media, for TV shows such as “Late Night with Seth Meyers” and “Saturday Night Live.” She later worked in the digital and marketing team of NBC Universal’s American basic cable channel, SYFY, for the programs “Mr. Robot” and “Suits.” Subsequently, she appeared in several TV advertisements for renowned brands such as Wild Stone Perfume, Vadilal Ice Cream, and several others.

Anuja made her film debut in 2014 in the film “100: The Tribute” and was later cast in the medical drama “The Resident,” which premiered on Fox in January 2018. Thereafter, she played Rivanah Benerjee in the MX Player series “Hello Mini,” which was based on the book “Marry Me, Stranger” by Novoneel Chakraborty.

She was later seen in the romantic show “Broken but Beautiful” in 2018, sharing the screen with Harleen Sethi and Vikrant Massey. 2021 saw her appearing in “Hello Mini 2.”

Anuja is married to the Indian-American dancer and actor Ankur Rathee, famous for appearing in 2019’s “Zoya Akhtar’s Made in Heaven”, and 2020’s “Thappad.” The couple met on the sets of a Raashi Desai and Siddhi Sundar-directed short film when they were young college students in New York City. They announced their engagement on Sunday, 19 July 2020, and the duo exchanged their wedding vows on 15 June 2022 in an 18th-century country-themed mansion situated in Hodnet, Shropshire, UK, after dating for over 10 years.

Joshi is the niece of the actress Pallavi Joshi – the wife of her uncle, Vivek Agnihotri – who is the winner of the Indian National Award.

Joshi is of Indian ancestry and has long black hair and a set of brown eyes. She is slimly built, weighs approximately 115lbs (53kgs), is 5ft 5ins (1.65m) tall, with vital statistics of 34-28-34. She has inked several tattoos on her arms – she has two birds and ‘XII 30” inked on her left underarm and right wrist respectively.

Anuja has accumulated a good sum from her acting and modeling careers. She also earns from paid advertisements, and her net worth is approximately $2 million as of 2022.

Who is Anuja’s Husband, Ankur Rathee?

Ankur was born on 21 March 1991, in Hisar, Haryana, India, and is 31 years old as of 2022. His mother is Usha Rathee and his father is Joginder Singh Rathee, who raised him together with his sister Sonia Rathee. He is well-versed in Contemporary, Hip-Hop, and Bollywood dances.

He attended The Bishop’s School in Pune and later joined the University of Southern California, and then Princeton University to study Film Production and Cinematography. The actor developed an interest in acting at an early age, and appeared in several plays such as “My Heart Is in the East,” “Journey Beyond the West,” and “Jade Emperor.”

He’s also featured in many commercials for brands such as Emirates, Airtel Wynk App, and Priya Gold Biscuits.

Her twin sister, Aneesha Joshi, is an actress and make-up artist assistant, and shares similar childhood details as her sister. She is famously known for her recurring role of Padma in the fifth season of the acclaimed Fox medical drama, “The Resident,” appearing together with Anuja in its episode “Da Da” in 2021. In 2016, she played Rangoli in the romantic drama film “Junnoniyat”, and has also performed in several other Bollywood films, such as “Simran” and “Heartbeats” both in 2017, “Padmaavat” in 2018, and “I’ll Meet You There” in 2020. Aneesha is also a very skilled dancer, as seen in several shows.

Her Father, Master Alankar Joshi, has over 100 film and series credits. He was born to Madhusudan Joshi and Shushma Joshi, and was raised together with his sister, the aforementioned actress Pallavi Joshi. Alankar rose to stardom in the ‘70s and ‘80s and his most notable projects are “Deewar” (1955), 1978’s “Sholay” and “Don,” and “Dream Girl” in 1977. In 1996, he founded the US-based software company, Creative Information Technology Inc., which is now valued at 500 crores, around $41 million.